Manchester City’s approach against Arsenal hasn’t multiplied much in relation to their spending over the seasons. Roberto Mancini has assembled a talented group of attacking players but he knows the best way to counteract Arsenal is through defensive resolution. “When you play against Arsenal and they play better than you,” Mancini said two seasons ago, “you must defend.” On Sunday, though, he was slightly more proactive in his approach.

Manchester City played the same 4-2-3-1/4-2-2-2 but instead of dropping off and allowing Arsenal time on the ball, in the first-half, they pressed high up the pitch. That change was probably an acknowledgement by Mancini that this time there is more substance to Arsenal’s passing game and to deny Mikel Arteta the pass out, is to deny Arsenal. You might say it worked – City took the lead without conceding a chance of real quality although Gervinho’s touch was the main reason for that. But Arsenal dominated possession and passed the ball in between Manchester City’s midfield comfortably enough to suggest they would sooner get through if things remained the same.

As such at half-time, Mancini sent on Jack Rodwell to play as a nominal right-midfielder, tucking in whenever Arsenal had the ball to stop Lukas Podolski and Santi Cazorla, in particular, combining centrally. It stifled Arsenal; and it wasn’t until Wenger replaced Podolski that they found space again. The equaliser came from a quick break, and with Rodwell over-compensating by tucking in, Arsenal doubled up on the left-hand side. Eventually the ball came inside to Santi Cazorla, whose shot forced the corner for the goal.

That both sides scored from corner-kicks means that the tactical battle never really materialised – at least not obviously. Both teams defended brilliantly around the box – in particular the two right-sided central defenders, Per Mertesacker and Vincent Kompany – but it was their partners who scored; Laurent Koscielny and Joleon Lescott.

Arsene Wenger sprang one tactical surprise when he selected Aaron Ramsey on the right of the front three. The idea was to have the Welshman tuck in to help Arsenal keep possession but also considering Arsenal’s bias to the left-hand side, especially the link up between Podolski and Cazorla, it would help the Gunners vary the play a little bit. Yet, there was another reason to his selection.

Last week, we talked about how Gervinho doesn’t play as a false nine, but as a channel running striker whose inclination is to drift wide. Therefore, with Ramsey cutting in, it would allow Gervinho to take up his position and try and get behind from the right. It nearly worked; Gervinho was put through early on in between Lescott and Clichy but his touch let him down and on a couple more occasions, he got beyond the defence on that side. It was an unorthodox ploy by Wenger but one which suggests he wanted to take advantage of what he thought was City’s weaker side. 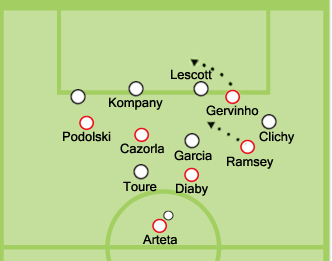 One final note on Ramsey, who was probably Arsenal’s best player. He seemed to relish the freedom to cut in from right. Ramsey has been criticised for his tendency to procrastinate on the ball in the past, but here he can. Nevertheless, his ball-retention skills were superb.

It’s a testament to Arsenal’s defensive discipline that the player who tormented them last season at the Etihad, David Silva, had a quiet game. Drifting inside from the right, he caused Arsenal lot’s of problems but this time, The Gunners organisation blocked his route to the centre.

Nevertheless, he did make a big contribution to the game which, if Mancini had acted upon, could have seen a different outcome to the game. It happened five minutes before Manchester City equalised where, having noticed his team were getting little joy, switched Scott Sinclair to the right, Kun Aguero left and David Silva centrally. This put the Spaniard back into his natural position and allowed him to get into pockets of space which he previously couldn’t and Aguero couldn’t.

City dominated and the spell of pressure put Arsenal on the back-foot. That was typified by the panic which went through Kieran Gibbs as he conceded an unnecessary corner-kick. City scored and while zonal-marking took all the focus, it was probably the Silva switched that proved the catalyst for City’s best spell. 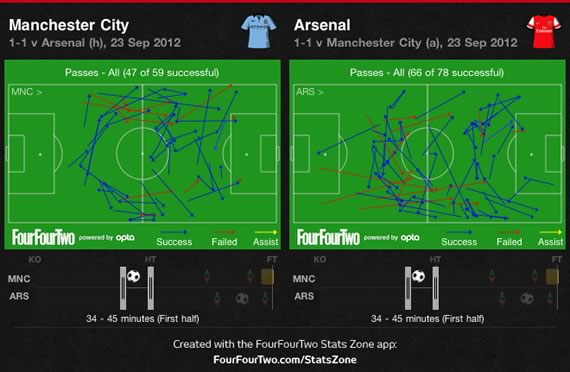 For a while in the second-half, it looked as if City’s big game experience might shut Arsenal out. It worked for twenty-five minutes – the default mark when Wenger typically makes his subs – and sure enough, the fresh legs gave Arsenal the impetus to push on for an equaliser. That was key because as much as Arsenal have impressed as a unit, Santi Cazorla makes Arsenal tiki-taka in the final third.

It probably freed him up; in the matches this season, he has tired badly in second-halves. But he came up with the shot that forced the corner which Koscielny scored from. The celebrations after captured Arsenal’s belief and togetherness. They wanted to make a statement. And they did.