Match Report – By the numbers – Video

If yesterday was marked down as Arsenal’s first true test of the season it’s one we passed with flying colours, even if we didn’t take three points.

59% of possession throughout and almost 200 more passes against the Champions tells you some of the story but what lies beyond the stats is far more important. To have the character and belief to come from a goal down, and a goal we pretty much gifted them shows there’s more to this Arsenal team than pretty triangles and tippy-tappy.

Arsene Wenger started with Gervinho up front, bringing in Aaron Ramsey on the right hand side while Laurent Koscielny slotted into the back four in place of the flu-hit Thomas Vermaelen. And after some cautious early minutes we began to dominate and should have scored when Ramsey’s delicious through ball found Gervinho. Unfortunately, rather than controlling it and slipping it past Hart for the opening goal his first touch was a perfectly hit back-pass for the City keeper.

Carl Jenkinson showed his improvement at both ends of the pitch yesterday. Defensively he marshalled Sinclair out of the game in the first half, and his strength and desire created a half-chance for Lukas Podolski only for the German to shoot over the bar with his weaker right foot. When City threatened they found the Arsenal defence in mean form, Per Mertesacker in particular was outstanding at the centre of the defence, and as the graphic below shows his seven interceptions in the game snuffed out potential danger both early and in and around the box. 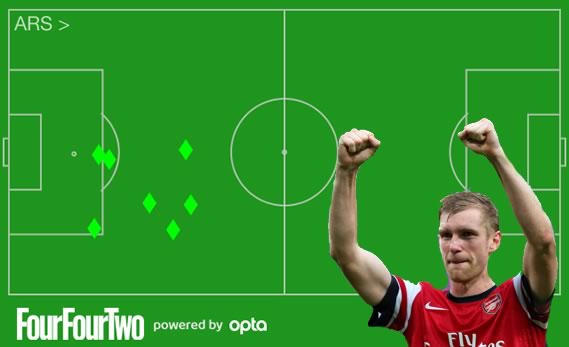 So it was pretty much against the run of play when they scored. An avoidable corner wasn’t defended as well as it should have been. Both Koscielny and Podolski were too static, allowing Lescott to power home his header, while Vito Mannone came and failed to get the ball as City went ahead just before half-time. The fact that Mancini withdrew Sinclair and put on Rodwell for the second half showed you he knew his team had been outplayed and he needed the extra body in midfield to cope with our passing and movement.

Initially it seemed to work. City looked better for the change and Arsenal struggled a little bit to get a hold of the game. City were a bit more threatening but we coped with set-pieces well enough and slowly but surely began to get back into it. Most of our final third action came through Gervinho. He was certainly a willing runner and his movement was good but with the ball at his feet he had one of those days. His shooting was erratic and his decision making odd, at times, needing too many touches without any end product.

Giroud and Walcott came on for Diaby and Podolski, who were both quieter than in recent games, and in the end the pressure told and we got the goal we deserved. After Joe Hart made a fine save from Santi Cazorla’s stinging drive, Arsenal took the corner and Koscielny was first to react to a poor header, smashing the ball past Hart and into the roof of the net. Cue raucous, but well merited, celebrations because that was a goal that brought some justice to the scoreline.

Both teams could have won the game subsequent to the equaliser. City had the best chance when, after Mannone saved Kompany’s overhead kick, Koscielny skewed his clearance straight to Aguero at the back post, 6 yards out, but somehow the Argentine put his shot just wide of the far post. Then, when Gervinho had made space for himself on the edge of the box he lashed his shot high and wide. It was typical of his day and while I don’t have any problem with him shooting from there, Giroud was just outside him and if he’d been aware enough to roll the ball out to him the Frenchman had a much easier finish to miss (I kid, I kid).

In the end you’d say the draw was probably a fair result under the circumstances but there’s a lot to be encouraged about from that Arsenal performance. Afterwards, Arsene said:

I am pleased also with the quality of our performance and our spirit. Also a bit frustrated because I feel there was room to do more. We had early chances and very late chances, especially Gervinho at the edge of the box where he missed the target. But overall I hope this will reinforce our belief and confidence and reassure us about our potential in this league.

For the second time in a week Arsenal came from behind to get something from a game, which is testament to the character in the side, but also the confidence they have in their own ability. There was no panic, nor was there any sense that being a goal behind against the champions meant it was game over, instead we worked hard, got back into the game in the second half and took one of the chances that came our way. With a bit more composure/quality up front you’d wonder how it might have gone but this is by no means a bad result.

The post-match work will obviously focus on the corner and what we can do to avoid conceding that kind of goal again but for the rest of the game we defended very well. The whole back four were excellent, Jenkinson’s development continues apace and as pointed out above the BFG was really very good indeed. His reading of the game is exceptional and his brings a calmness to proceedings that’s very reassuring.

Arsene Wenger spoke afterwards of the difficulty he faces when trying to choose from his three ‘first class’ centre-halves. Koscielny came in and played his part – although there were some signs of rustiness in his first start of the season – but having to pick between Mertesacker, Vermaelen and Koscielny is the kind of ‘problem’ that Arsene Wenger will relish. It’s far better than worrying about who’s going to play and how far the pecking order you have to go down to find someone.

And a word for the midfield. Arteta was a metronomic marvel as always – 100 out of 106 passes completed (94%) – but he does it on top of working so hard when we don’t have the ball. He’s an example to any of our young midfielders. Santi Cazorla was a little quieter than in recent games but still gave us an assured focal point when we came forward, while Aaron Ramsey had his best game in a long, long time. With the pressure slightly off the Welshman looks more confident and it was a sign of the manager’s faith in him that he started him on the right hand side to begin with (in a way reminiscent of the way he deployed Benayoun in this kind of game last season) and then moved him back into midfield to replace Diaby.

There was little or nothing between the two sides last season and yesterday’s game showed that on our day we’re more than a match for Man City. It’s how we cope over the duration of the season that will really show us if we’re strong enough or have enough depth, but seeing us go head to head with them should provide plenty of reassurance that this is a team transformed and far better able to cope with the rigours of the league this time around.

Overall, very positive, lots to be encouraged about, and with the Capital One Cup providing some midweek distraction, we ought to be in good shape ahead of another stiffy against Chelsea next weekend.