It looks like Gervinho might finally start living up to the prophecy that he could be as good as Lionel Messi. That was the view of Daniel Jeandupeux, the man responsible for bringing Gervinho to Ligue 1 for Le Mans, who described Gervinho as having the potential to be “like Messi” because of his ability create and score goals. It’s safe to say those are unattainable heights for any player to reach but with 5 assists and 4 goals in his début season, Gervinho fell well short.

Gervinho, though, can replicate Messi in role because in 6-1 win against Southampton, he was used as a roving number 9. However, at the risk of over-complicating the beautiful game, I’d hesitate to call his role a “false nine” as many already have. Because the term “false nine” indicates a player who starts off in the centre-forward position but his natural inclination compels him to drop deeper in search of possession. Gervinho, though, tended to drift laterally (see below) as he’s more comfortable coming inside. But that, along with the combination play around him, was the key to Arsenal’s dominance over Southampton. 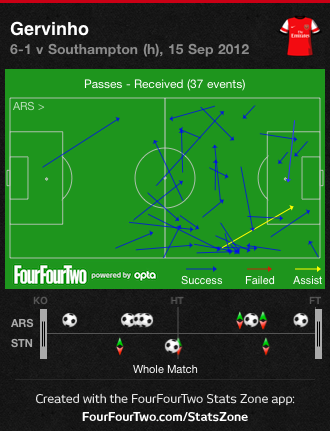 With Arsenal’s paucity of natural striking options, Arsene Wenger resisted the temptation to move Lukas Podolski to a central position and risk breaking up a successful partnership. He admitted as much in his post-match interviewing, saying Podolski “gives us a balance on the left.” So instead, he plumped for the man noted for bad decision-making and a vulnerable interior; thankfully, he displayed none of those unfortunate traits.

Gervinho was wiry in his movement, causing confusion with the way he drifted across the pitch and combining with his team-mates. With no obvious target-man, Arsenal played with one or two touches, always keeping the opponents guessing before suddenly releasing the ball to meet one of the forwards’ runs. Arsenal’s third was probably the archetypal goal – Gervinho spinning off the last defender to finish off Mikel Arteta’s through-pass. But, even if one of Arsenal’s players failed to get onto the end of a cross or a pass, Southampton made sure for them anyway, scoring two own-goals. It was one of those days. 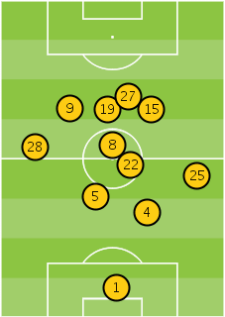 The other advantage of having no discernible focal point, as highlighted by Gervinho’s first goal, is that it makes it harder for the opponents to know who to pick up. As you can see from Opta’s average position diagram, Arsenal’s four forwards played almost in a line, interchanging positions – a 4-2-4-0 if you like – and as such, Southampton were obliged to push up. They played a higher line than they would have wanted to and Arsenal profited from the gaps behind.

*Just a word on Santi Cazorla who was once again superb. So far this season, the striker’s role this season has been most effective acting as a decoy and while Gervinho got two goals as well, Cazorla used the space the Ivorian created to wreak havoc. What’s particularly hard to defend against the Spaniard is that he starts off as a second-striker pressing, but he then drops back to pull the strings. His combination play with Arteta and Podolski in particularly has been fantastic and part of Wenger’s apprehension of moving Podolski higher was that he’d lose that partnership. Alas, the two were unstoppable in the first-half and most of Arsenal’s best play came down the left flank nas a result.

In the case of Saturday’s win, you could almost do without tactical analysis and just put down Arsenal’s dominance to how well they passed and moved the ball around. But as previous seasons have shown, opponents often use their predilection for the intricate against Arsenal by crowding the centre. Indeed, we have already seen it this season when The Gunners’ drew against Sunderland. However, that wasn’t the case this time though as Southampton’s gameplan backfired.

Their plan was to overload the centre and frustrate Arsenal’s typical route towards goal. However, in doing so, they ceded the wings and allowed The Gunners’ full-backs to push forward at will. Except they didn’t; that would have been too obvious and easy for Southampton to defend. They wanted Arsenal to cross the ball. Instead, Arsenal looked to move the ball across the pitch and back again, dragging Southampton’s midfielders around, creating space for the onrushing full-backs to cross. That meant crossing was always unexpected and the proof told when Kieran Gibbs forced two-own goals.

While Arsenal have the best goal difference and thus with it, best defensive record, we still don’t truly know where Arsenal are as a team. Wenger says he’ll leave that assessment until ten games or so when he learns more about his rivals. Certainly, that Arsenal “have played,” writes Miguel Delaney for ESPN, “two of the deepest-lying teams in the Premier League painted an unfair picture of their attack as well as a flattering one of their defence” while are a “side who have problems at both ends.” That’s a bit harsh as Stoke away is one of the toughest tests in the Premier League and tactically, Arsenal were impenetrable against Liverpool, not to mention efficient.

Southampton sit somewhere in between the level of opposition Arsenal have faced so far although to the lower echelons of the spectrum. They showed ambition – more thanSunderland– but lacked the quality to take advantage of their possession. They had 49% of the ball which not only indicates Southampton are a better side than the scoreline shows, Arsenal also defended very deep at times. That’s unheard of at The Emirates, underlying the Steve Bould influence. It was effective as Southampton were never able to penetrate the final third until their goal late in the first-half. It came, unsurprisingly, from a goalkeeping mistake but what’s not unexpected is that it came from a cross.

If Arsenal persist dropping that far deep, they’ll have to accept crosses will be conceded and they need to make sure they defend them well. They can’t accept, however, when the cross comes, mistakes like Wojciech Szczesny’s which gifted Danny Fox a consolation goal and with it, Arsenal’s perfect defensive record.