How very Arsenal. One moment nothing, the next we’ve signed a player and a player that not one Arsenal website, not one tabloid, not one reader of Arsenal websites and tabloids had predicted for a second. Classic Arsene.

Eduardo da Silva joins on the usual terms, a long term contract for an undisclosed fee. Despite reports suggesting the fee might be the whole Â£16m we got for Thierry Henry I’m told it’s closer to Â£7.8m which is still a fair chunk of money. 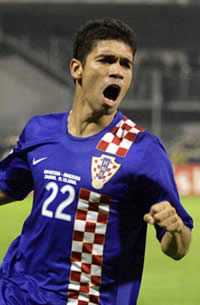 So, what do we know about him?

Well, we don’t really know that last one but who doesn’t like toasted cheese sandwiches from a Breville sandwich maker? Only those in league with Satan, that’s who.

Here’s a YouTube link to his 34 goals in 32 games last season for Dinamo Zagreb and his finishing and arriving into the box late puts me in mind of Robert Pires (not that I’m trying to raise people’s expectations here but it does). And here’s an article from last month in the Guardian about him.

I am excited and happy at the same time, also very proud that I am going to play in such a big club. Every football player wants to play for Barcelona, Real, Manchester United or Arsenal one day and so do I.

Excellent, just what you’d expect him to say. Personally I think this could be a very good signing indeed. The reaction yesterday was quite amusing, I thought. Reading around the blogs once people had got over the excitement of us actually making a signing then people’s opinions were quite mixed. Yes, it’s a big step up in quality from the Croatian league to the Premiership but he’s already been called ‘special’, and not in a window licking way, by Croatia coach Slaven Bilic who was fullsome in his praise of our new boy.

However, his goalscoring record and the way he scores his goals is very promising indeed. The idea that Arsenal NEED a big money signing to make some kind of statement or to keep certain sections of fans happy is just ridiculous. What we need are players who can come in and do a job straight away whether they cost Â£1m or Â£20m and despite all the evidence to the contrary there are still people who think that big money transfer = big success.

It just shows that even though some people are accusing the club of doing nothing there’s a lot going on behind the scenes that we don’t know about. Here’s hoping there’s more going on we don’t know about. More stuff like this. Anyway, the proof is in the pudding so we shall have to wait to see him in an Arsenal shirt before we make our first real judgement of the player so until then let’s just welcome him to the best football club in the galaxy and hope that Arsene has unearthed another gem. He’s due one, in fairness.

The Chairman, PH-on the down low-Wicky, wicky, wild wild West, spoke about the transfer and hinted there might be further purchases, saying:

As always with Arsene there is a lot of work going on behind the scenes.

More good news yesterday came from Cesc’s agent who dismissed the interest of Real Madrid and Barcelona in the player and said he was looking forward to the new season. He also hinted at more transfer activity, saying:

Arsenal are going to buy a lot of good players and they are going to be a major team both in the Premier League and Champions League. Without Thierry, Cesc is one of the best players at Arsenal and this is fine for him, he is happy with the responsibility.

Various reports in the broadsheets suggest Arsene Wenger is set to sign Bakary Sagna, the right back we don’t need, so we’ll either sign someone else entirely or there’s a plan about where to play this lad. As well as that some papers are saying that doesn’t signal the end of our attacking purchases with Martins and Anelka still on the radar but we shall have to wait and see what happens there.

So, the curious way of the Arsenal strikes again. Never one to do things the conventional way I expect our next signing to be announced by Arsene Wenger wearing comedy Groucho Marx glasses and ‘tache from an Italian restaurant with red and white checked tablecloths and drinking a carafe of house red.