Happy Wednesday to you from a thoroughly miserable Dublin. It’s cold and wet, like an aroused Ice Queen of some kind.

We are delighted to have signed Eduardo Da Silva. He has great qualities and will integrate very well into our style of football. He is a very good finisher and although he is predominantly a striker, he is a very adaptable player. 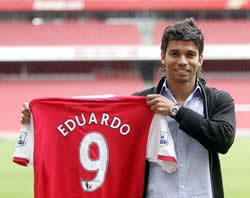 And I for one would like to welcome our new left back. The player himself was full of the usual waffle a player who joins a club comes out with and you can read an interview with him about how the transfer came about and all that stuff here. He will wear the number 9 shirt which has been worn with such distinction in recent years by JosÃ© Antonio Reyes, Julio Baptista and, erm, Francis Jeffers. Here’s hoping he fares better than those lads with the quite obviously cursed number. Not keen on that new Premiership lettering either but no doubt we’ll get used to it.

Croatia coach Slaven Bilic and former Gunner Davor Suker both reckon he’s got what it takes to make it at Arsenal. Bilic says:

He’s going to be amazing for Arsenal. He’s very young and very quick. He’s a goalscorer but his game does not just depend on scoring goals. He’s a team player and he opens up space for others.

No doubt he’ll have to pop back over to Croatia and pick up Playstation and B52s albums (he’s a massive fan) and then he’ll be back at the club for pre-season training. Good stuff.

The club also officially announced the signing of 17 year defender Harvard Nordtveit again on a long term deal for an undisclosed fee, but then we’ve known about that for weeks now. I can confirm the fee was around â‚¬2m and he’s signed for three hundred years. The deal is so long term that his children will sign for Arsenal at birth.

After hearing from Cesc’s agent yesterday about how he (Cesc) was looking forward to the new season we heard from the player himself. Talking about how much of a success he thinks Thierry is going to be at Barcelona he spoke about his future, saying:

The summer is now over for me. I am going back to pre-season training very soon at Arsenal. My team. I am staying in London.

Awww, I love that little guy. His team is like my team! Sometimes players need something like the departure of a big player like Henry to move up a gear themselves and take more responsibility. I expect that to happen with Cesc and the likes of Robin van Persie as their importance to the team grows.

The Sun is reporting that Arsenal have offered Arsene Wenger a new 4 year deal worth Â£75,000 a week and they want him to sign it by the end of the week. They also say we’re still after Obafemi Martins but are battling with Juventus for his signature. They also probably have some pictures of boobs. Still, a new deal for the boss would provide the stability that’s needed at this moment and deprive some journos of their current favourite Arsenal story.

Paul Merson, he really makes me laugh when he’s on Sky, but he’s such a negative Nancy. He talks about being worried about Arsenal and while I can see where he’s coming from his natural pessimism shines through in this article.

Bakary Sagna has pleaded with Auxerre to let him move and Arsenal is his ‘dream’ apparently. He’s a strange talking guy. He says “Auxerre directors ask for a lot of money, I am not lucky. It is capital for my future”. Quite. Still haven’t figured out how he fits into the plans, if he genuinely is a target, but we’ll wait and see.

And that’s about that. I was going to mention Jeremie Aliadiere and his comedy accent but who are we to question the wisdom of Gareth Soutgate.

Finally, a happy 4th of July to all our American readers. Remember, if you light a firework and it doesn’t go off you have to nudge it along the ground with your nose to make it work again!