After signing Leandro Trossard, Arsenal wasted little time diving back into the transfer market to complete a deal for Spezia defender Jakub Kiwior.

But who is the Poland international, what will he bring to the side and why is he costing upwards of £20 million? Phil Costa reports.

Football has the wonderful ability to remind you that development occurs at different rates for players. Olivier Giroud was playing in France’s third tier at 22, but is now his country’s all-time top goalscorer. Bojan Krkić couldn’t stop breaking records as a teenager but spent his next decade in the Championship, Canada and now Japan. Similar applies to Jakub Kiwior who suddenly finds himself at Premier League leaders Arsenal, having worked his way up at Anderlecht, two Slovak clubs and Italian strugglers Spezia.

This was no story of overnight success and Spezia deserve credit for their initial intuition, signing the defender for €2m after MŠK Žilina were forced to declare bankruptcy during the coronavirus pandemic. Since joining the club, Kiwior has impressed and saw his domestic form rewarded with a call-up for the 2022 World Cup, where he started all four games for Poland. His growing reputation quickly coincided with interest from several top clubs; including AC Milan, Juventus and Borussia Dortmund.

What instantly becomes clear when watching Kiwior is how naturally he welcomes first-phase responsibility. Those entrusted with this role are typically more senior players, tasked with dictating the tempo of their sides’ play while also being expected to handle themselves physically. Upon signing for Spezia, the 22-year-old was brought straight into their starting eleven by former manager Thiago Motta and quickly became the reference point for his goalkeeper and defensive partners. He would drop as the deepest defender in a back three – or as the spare man in midfield – turn, and spray diagonals across the pitch with pinpoint accuracy.

This will have been a major factor in catching the eyes of club scouts due to the responsibility being placed on their centre backs to progress play. Granted, William Saliba and Gabriel are statistically superior for passes attempted, passes completed and progressive passes per 90 this season, but Kiwior currently averages 44 passes per game with a success rate of 85% for I Aquilotti – WhoScored data – ranking second and first, respectively, against all other teammates. There is also variety to his passing despite those long diagonals standing out, with driven passes into midfield and delicate chips down the line all part of his playbook.

The 22-year-old is also an accomplished ball carrier which helps explain previous stints at left back and midfield, and looks surprisingly graceful when breezing past players into the middle third, sharing similarities with Nemanja Matić in how they control their taller bodies. He currently sits in the 90th percentile for dribbles completed (0.4) per 90 among positional peers in Serie A, and is often called upon to provide an alternative ‘out ball’ for Spezia should they struggle to pass through the thirds. There is a mobility and sharpness to his movement that belies his frame, which allows him to evade pressure smoothly despite the occasional sense of overplaying.

More importantly, there is a welcome steel to Kiwior despite his modern approach to defending. Only two players have blocked more shots than the Poland international (18) in Serie A this season, while no other Spezia teammate can better his 1.4 interceptions per 90 – highlighting his proficiency for pushing up, touch-tight with strikers and forcing them back towards their goal. Stylistically, he presents a large, imposing figure with the athletic capacity to defend in space, which conveniently mirrors the current role of Gabriel who is often left isolated behind Oleksandr Zinchenko when pushing into midfield. 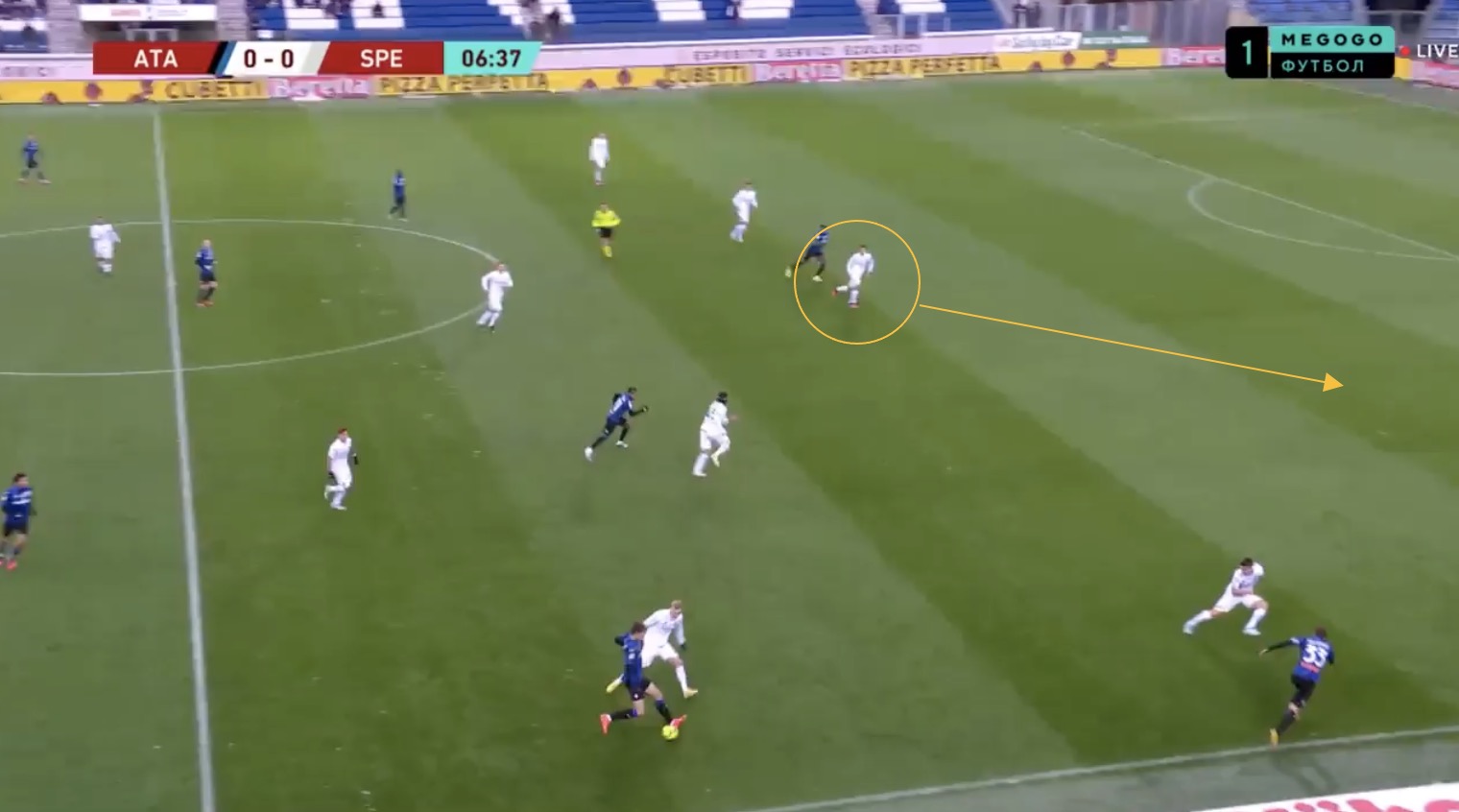 Unsurprisingly for a young player with limited top-level experience, there are kinks to his game that need ironing out. Spezia are one of the poorer sides in Italy and concede more shots per game (16.9) than any other top flight team, which means their defenders are regularly called upon to intervene. Kiwior is no stranger to last ditch blocks or tackles, but will have to curb his habit of going to ground too easily when ushering players away from goal would prove just as effective.

There is a slight ‘all or nothing’ feel to his play which Mikel Arteta has done well to stray from – especially defensively – although this could stem from the sheer amount of pressure being faced each week. The 22-year-old will also need to manage his aggression more effectively as there have been strikers able to pin him (and spin him) this season, particularly against Inter and Lazio – with Romelu Lukaku and Ciro Immobile both able to expose that rawness.

Recently there has been a real shift in how Arsenal identify players, who now focus on specific attributes and qualities, as opposed to the individuals themselves. The system is clear, what’s more important is where you fit – in the five behind or ahead of the ball – and how your qualities translate to the role. When watching Kiwior it’s hard to look past his suitability for this team based on his technical level, left-footed distribution and physical capacity to defend in isolation. The raw ingredients are there, but impetus now moves onto the defender and his ability step up.

It’s worth noting that Kiwior has only spent eighteen months in a top five European league despite his rapid rise, clocking up just 43 appearances for Spezia. But he and the club will take comfort in how the current environment at London Colney offers a smooth transition to a higher level while still remaining competitive, where the defender can acclimatise without feeling an instant demand to settle.

There is no magic formula for gambling on potential. But it’s apparent that scouts have done their homework, with the players’ agent even revealing how his client was ‘enchanted’ by Arteta during conversations ahead of the move. There is total trust in the process and quite simply: who wouldn’t want to be a part of this?