But who is the Belgian, what will he bring to the side and why is he costing (up to) £27 million? Phil Costa reports.

When it comes to scouting, few in recent years can match the track record of Brighton in English football. Following their promotion to the Premier League five years ago, they have signed the likes of Marc Cucurella, Yves Bissouma, Moisés Caicedo and recent World Cup winner Alexis Mac Allister, from Getafe, Lille, Independiente del Valle and Boca Juniors respectively. In-demand winger Leandro Trossard was also brought to the club in 2019 after impressing for Genk, where former manager Graham Potter pushed for his arrival.

And most would agree that his £15m transfer fee was money well spent – despite a difficult ending. The Belgian has been a mainstay for Brighton since stepping through the doors at AMEX Stadium, thriving in several different positions and was even voted the club’s Player of the Year for 2022. He departs with 39 goal contributions (25G, 14A) in 121 appearances and more than played his part in establishing the Seagulls’ top flight status in recent seasons.

What instantly stands out whilst watching Trossard is his technical security. The Belgian lacks natural pace to create separation from defenders, but instead uses his low centre of gravity, ability to manipulate the ball and neat touches to escape pressure. Stylistically, he will not be able to replicate the hard-running, direct styles of Gabriel Martinelli or Bukayo Saka but offers Mikel Arteta more variety when looking to break down deep defences.

He currently sits in the 95th percentile for progressive passes (3.4) and passes into the penalty area (2.4) per 90 among positional peers in the Premier League – Opta data – while his 3.7 shot-creating actions per 90 leaves him in the 89th percentile; highlighting his more creative instincts.

The 28-year-old has also proven his knack for goalscoring without being prolific. This season alone, Trossard has netted against Manchester City and Chelsea, in addition to his hat-trick at Anfield back in October. There is a hint of streakiness to the Belgian but that capacity to contribute in big games could prove crucial. More importantly, Trossard is extremely decisive in the penalty area with accomplished ball striking technique on both feet and awareness to set up teammates. He is able to generate significant power with little backlift and likes to take shots on early, which affords goalkeepers little time to reset their positioning. 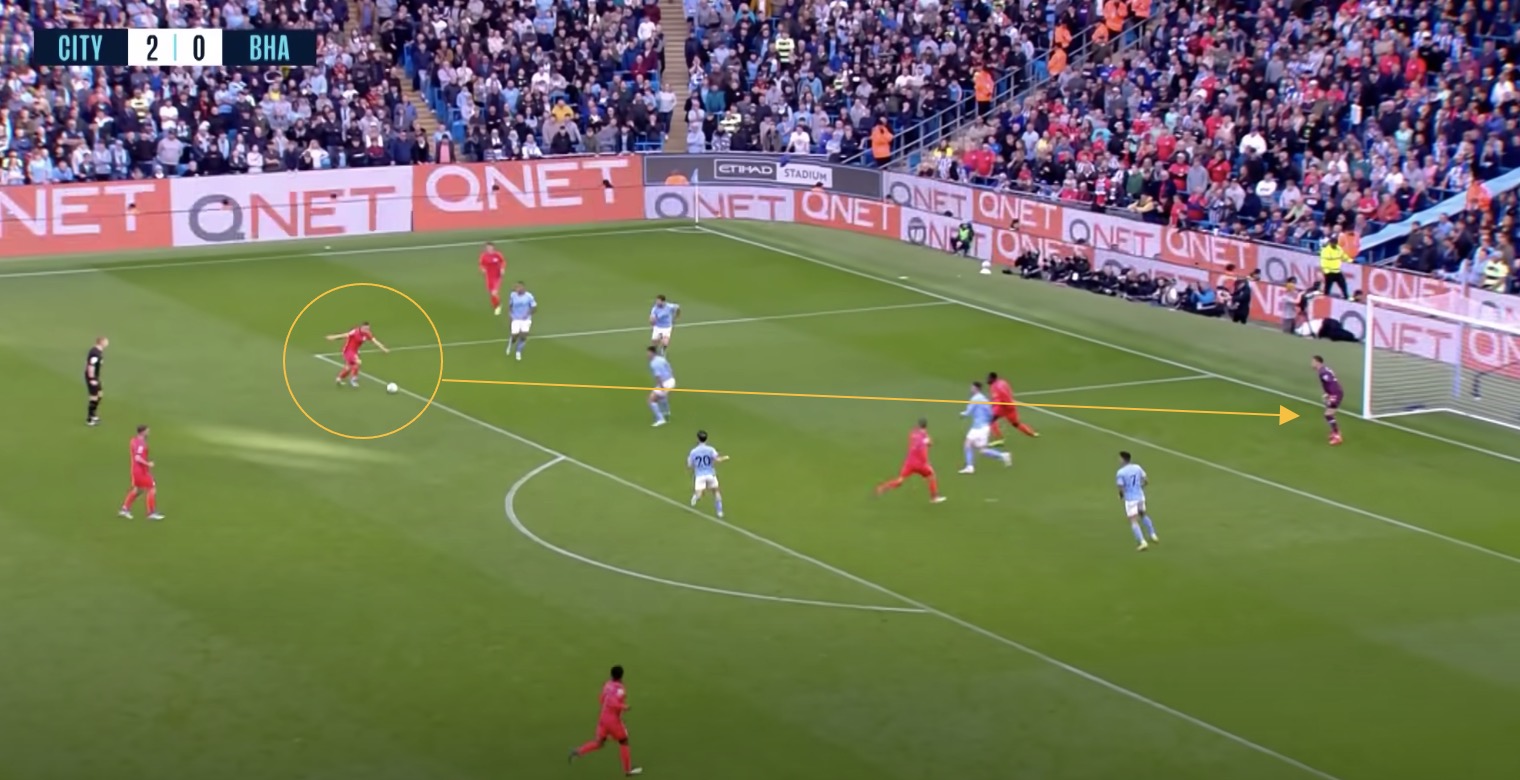 As pointed out by Dan Critchlow, the Maasmechelen-born forward has taken an identical number of shots with his left and right foot in the Premier League this season (19-19), which also rang true during the 2020/21 season (28-28). More encouragingly, his non-penalty xG of 4.4 can only be bettered by Saka from the current squad, which Trossard is still over-performing on seven goals. His shot selection is clearly very considered – the majority of which come from inside the penalty box – with 16 of those 34 shots hitting the target this season.

He also offers Arsenal greater versatility having played at wing-back, on both flanks and even false nine for Brighton since joining the club. While Mykhaylo Mudryk was clearly earmarked for a significant role in this team, he has only played at left wing throughout his career. Trossard comes in as important cover across the frontline – able to compete with and ease the burden on first choice options – while also taking Emile Smith Rowe and Gabriel Jesus into account, whose integrations will need managing after long injury absences. 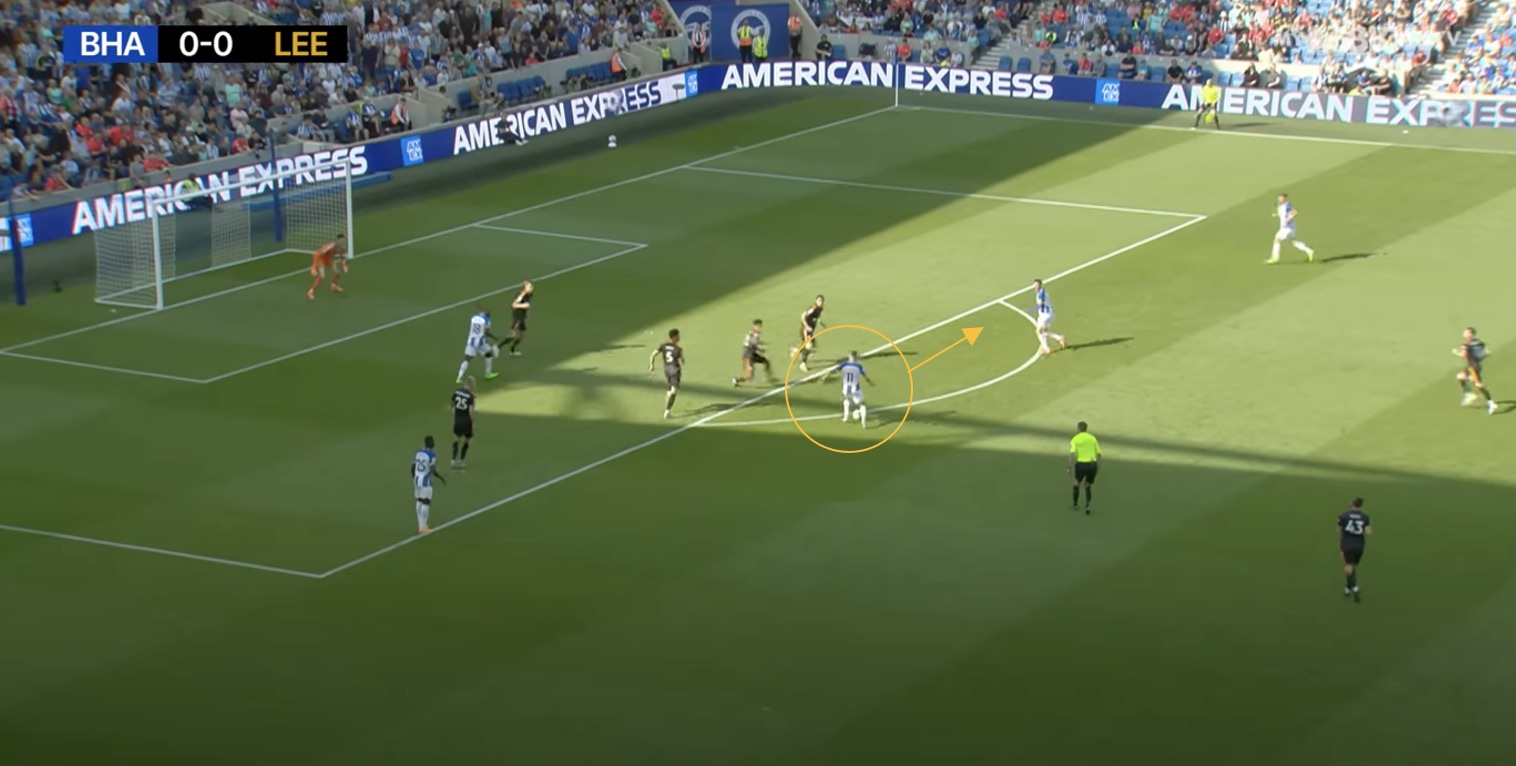 Defensively, the Belgian is hardworking but must be stronger in direct duels (doo-ells?) to play under Arteta. His defensive output has dropped considerably this season compared to previous campaigns – whether that is down to instruction or otherwise remains unclear – but he often feels light and non-committal heading into challenges. Alternatively, the 28-year-old currently sits fourth in the Premier League for ball recoveries (4.5) per 90 which highlights his capacity to identify space and exploit pressing triggers.

Another habit Trossard will have to curb is doing ‘too much’ in possession, especially after beating players where he often dribbles back into trouble or gives other teammates a chance to surround him. His ‘streakiness’ was also mentioned above – there is an ongoing joke amongst Brighton fans that he disappears between November and March every year which is something to keep in mind – especially with him likely to be playing fewer minutes.

It’s fair to say that Arsenal fans have been brought back down to earth after failed pursuits of Mudryk and João Félix this month. The storyline was written: young players with skill and star quality to arrive and help secure a first domestic title in 19 years. Trossard may not have the same gravity but his proven Premier League quality ticks plenty of boxes for this squad and their targets.

Last January, the club opted against signing anybody after parting ways with Pierre-Emerick Aubameyang, leaving their top four pursuit in the hands of Saka, Martinelli and Eddie Nketiah who quickly usurped Alexandre Lacazette up front. That gamble failed – letting it happen again wouldn’t be another gamble but pure negligence. This young group are edging towards something special but desperately need help, before their hamstrings turn into dust after playing 90 minutes twice-a-week until June.

Trossard joins with experience, a high technical level and consistent output to help this group in arguably his last chance to impress at a big club. The recent falling out with Roberto De Zerbi deserves consideration but scouts will have done their homework – this was a player being followed four years ago when they bought Nicolas Pépé. Arsenal, meanwhile, are searching for all the above. Someone with top flight know-how and quality to push their attacking starlets but also protect them during the final stages of a ruthless schedule.

This doesn’t need to be the perfect marriage but it’s one that undoubtedly works. After all, we are better judges of convenience than we are of love.