Morning, happy Friday to you all, and here’s a quick World Cup round-up for you.

Obviously there’s a lot to talk about when it comes to Japan, Spain and Germany, and position of the football in the build-up to the winning goal, but before all that, can we just take a moment to give Japan their dues for what they’ve done in this group.

1-0 down at half-time to Germany in their opening game, they transform themselves in the second half, take advantage of some German hubris, and turn the game around to win 2-1. Next up, they lose to Costa Rica who were absolutely demolished by Spain in their opening game. And then last night they were 1-0 down at half-time again, after conceding early too, and once more they flipped that deficit to go on and win the game.

Leaving aside everything else, it’s a remarkable sequence of results and to top the group in the way they did deserves a lot of credit. I’ve seen people talk about how Spain didn’t really try last night, and I’m a bit confused as to what game people were watching. Japan defended really well, and they had to defend really well because Spain were trying to score. I don’t believe they sat off or anything like it.

As for the Japanese goals, Unai Simon was not great for the first, he had Almunia wrists for that one, but all the discussion is about the second and whether the ball was out of play before it was crossed back in. From this angle that we were served up on TV it definitely looks out: 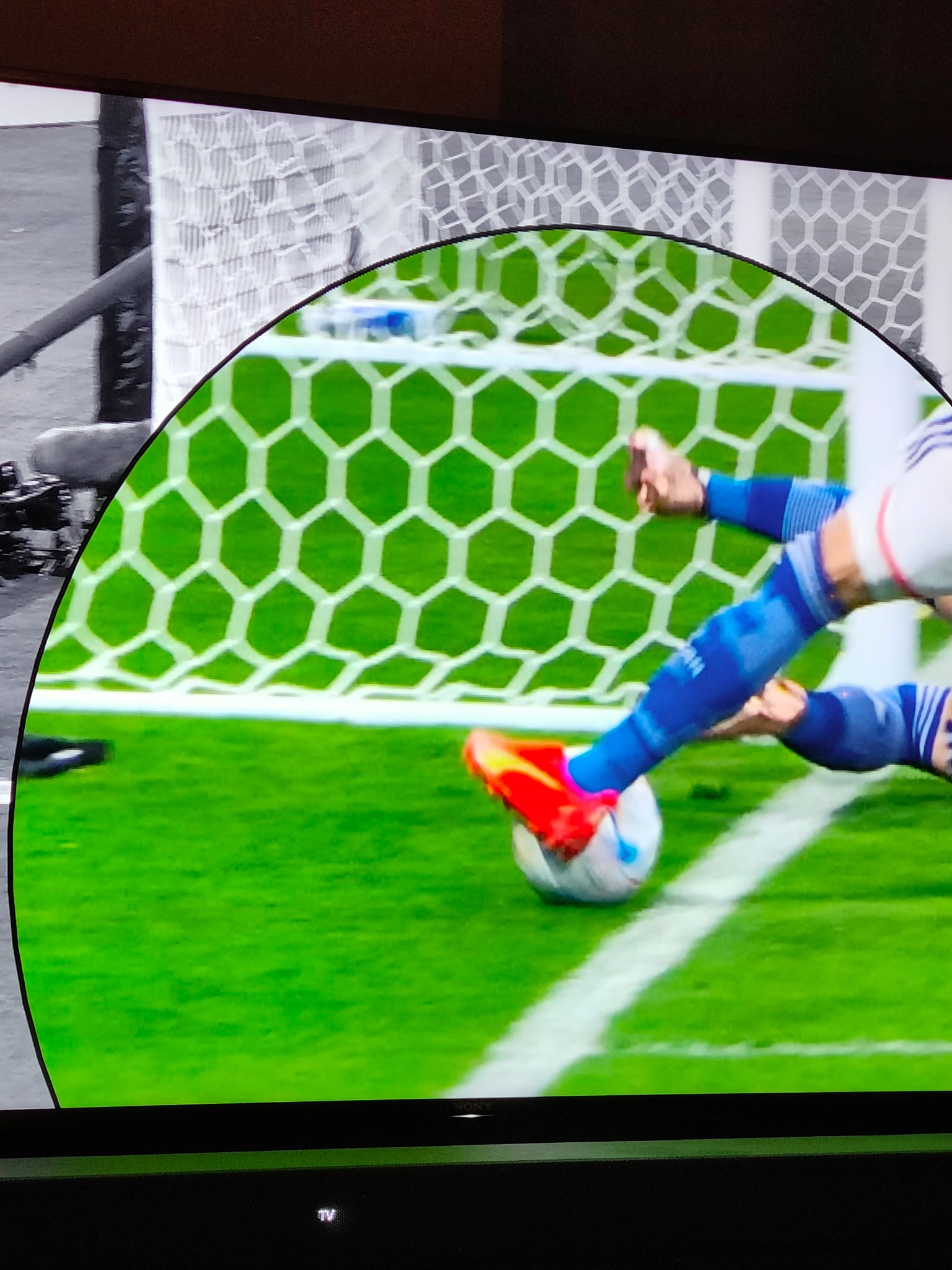 But when you see it from above, you can see that by the tiniest of margins all of the ball has not gone over the line: 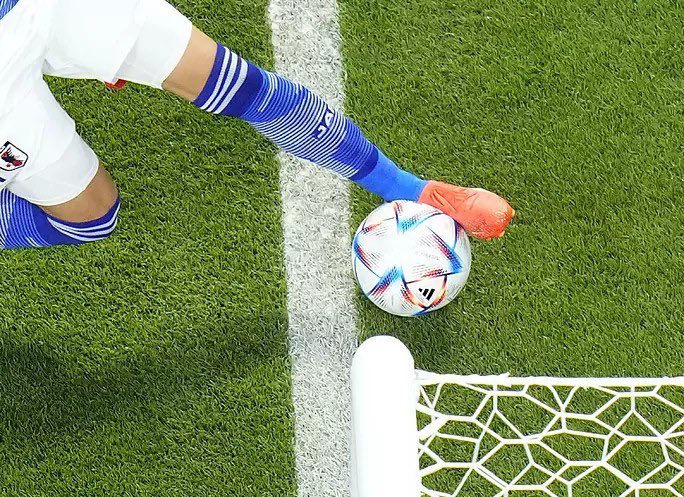 Honestly, I think this an issue that people will continue to argue until kingdom come, and I suspect opinions in Germany will differ from those in Japan. Perhaps one thing that’s lost in the discussion is the quality of the ball back in – perhaps it was just fortuitous but the chop between the post and the defender to allow Tanaka to score was quite brilliant.

And as I said, Japan defended really well after that. We saw Takehiro Tomiyasu come on and play his part in that for the rest of the game and the injury time, and that’s an aspect of this game that won’t get as much discussion as the tiny amount of  the ball that was/wasn’t touching the line, depending on your point of view.

In the other game, Costa Rica actually went 2-1 up on Germany for a couple of minutes, which gave us a scenario where both of the big European sides would have been eliminated, but they proved too strong in the end and ran out 4-2 winners.

An underrated feature of this World Cup has been sheepish Man of the Match photos. For example, Kevin de Bruyne after Belgium’s lucky win over Canada in their opening game: 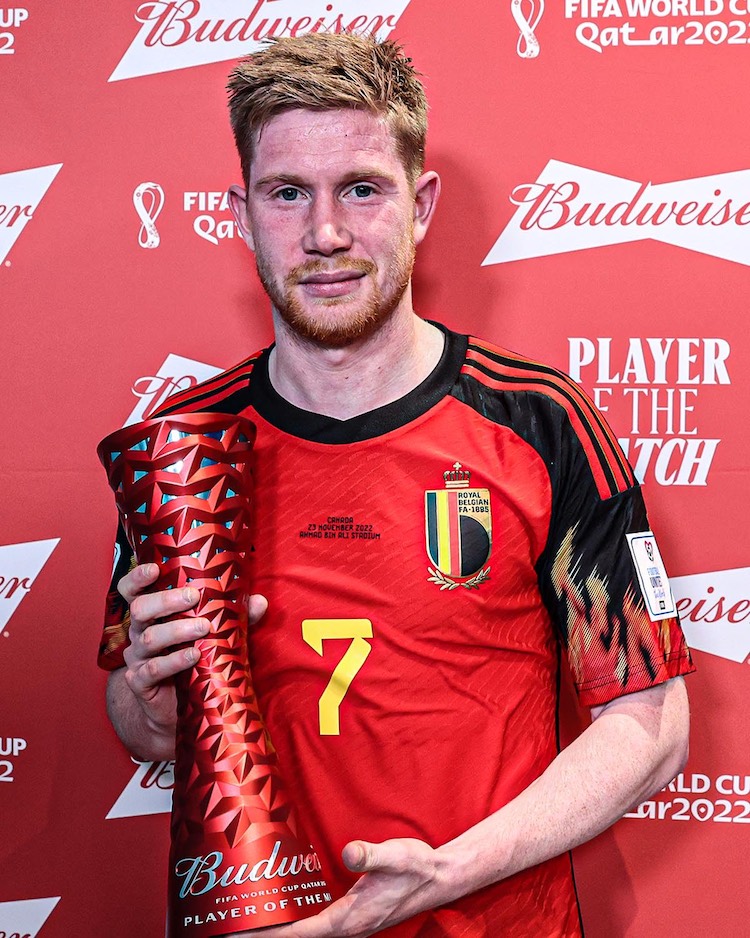 And we can now add Kai Havertz to the list, standing there with his Budweiser trophy after Germany had been knocked out: 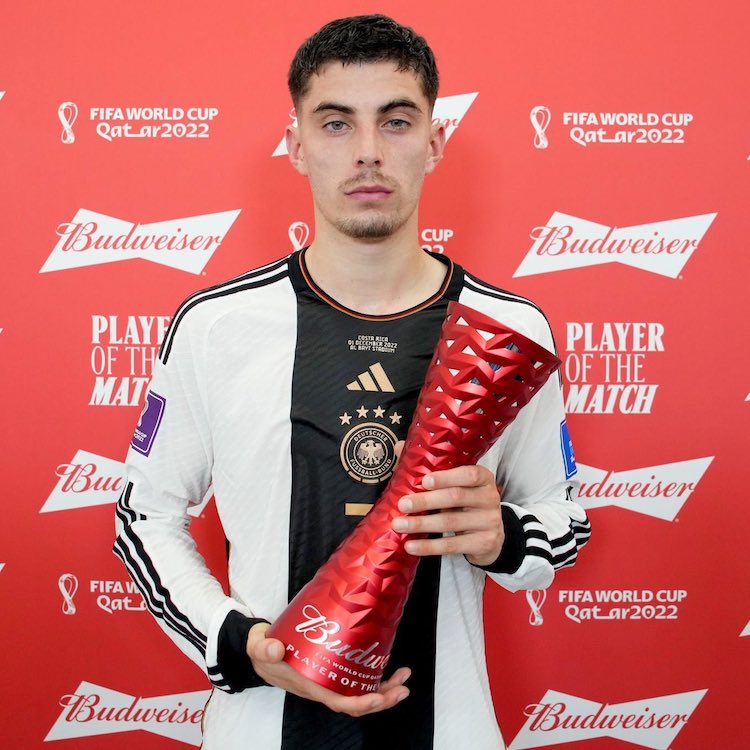 Japan won the group and now face Croatia on Monday, while Morocco’s ‘reward’ for topping their group is a game against Spain on Tuesday. On paper, they would likely have thought it’d be Spain or Germany anyway, and they’ve done well enough in the tournament thus far to feel confident they can get a result in that game.

Earlier in the day, Belgium went out in vaguely ridiculous fashion after a 0-0 with Croatia. The first half was interminably dull, the second an astonishing sequence of missed chances by the Belgians and Romelu Lukaku. To be fair to him, he’s hardly played this season due to a hamstring problem, but a player of his experience really ought to have done better with some of the opportunities he got. You just can’t miss those at this level and expect to get through.

It’s also worth noting the tackle of the tournament so far from centre-half Josko Gvardiol. Late on, as Lukaku swung his leg to apply a near post finish (which probably would have ended up in the car park anyway), the 20 year snaked a foot in at the last second to get the ball away. We’ll probably be asked to vote for the goal of the tournament and the save of the tournament, but maybe we need a new award so defenders can get the props they deserve.

Today, there’s expected Arsenal interest for Brazil as both Gabriel Jesus and Gabriel Martinelli are reportedly set to start against Cameroon, while Switzerland v Serbia – with Granit Xhaka captaining the Swiss – could well be tasty. There’s some history there, as there is with Ghana v Uruguay taking place this afternoon.

Right, let’s leave it there for now. There’s a brand new Arsecast for you below in which I chat to the writer and producer of the excellent Netflix documentary, FIFA Uncovered. Enjoy!