Morning all, a Saturday round-up for you.

The final group stage games of the World Cup took place yesterday, and there were mixed results for two Arsenal midfielders. Thomas Partey’s Ghana are out after they lost 2-0 to Uruguay, but so too are the South Americans after South Korea beat Portugal 2-1.

Their late goal meant Uruguay needed to score, and Luis Suarez on the bench reacted … emotionally to the prospect of being eliminated. I’m not joking when I say that my Twitter timeline – and by that I mean posts from the people I actively follow – was awash with images of him in various states of distress, angst, and tears. I get he’s an emotional guy and this is his last World Cup etc etc, but I just thought while the game was going on it was a bit much. At the end when you’ve gone out? Sure. I understand, and the sheer volume of those images demonstrated that Suarez is really not the most popular man in this particular neck of the football Twitter woods.

Uruguay did everything to try and get a goal. The Ghana keeper made a couple of saves, and there was fury from their players and bench when they didn’t get a penalty, but I was so glad to see it not given. It was a classic of the ‘Throw your leg into the defender and fall over’ genre from Edinson Cavani. The kind Harry Kane gets a lot in the Premier League, the kind Wayne Rooney used to get a lot during his time, and I find them the most infuriating penalty awards of all. I remember one in particular when Rooney threw himself into an onrushing Almunia, and every commentator and pundit spoke about the Arsenal keeper taking Rooney out while every replay showed exactly the opposite.

“WHAT IS WRONG WITH YOUR EYES?!”, I might have shouted at the TV back then.

Later, Gabriel Jesus and Gabriel Martinelli started for Brazil. I didn’t see much of this one. Brazil got beaten, Jesus was taken off around the hour mark, and there are reports this morning that he felt pain in his knee and is due to undergo some tests today. Like me, I’m sure you will be keeping everything crossed that there’s nothing serious, because that would be a significant problem for us when we return at the end of December. Apparently Martinelli was very impressive, but then that should be of no surprise to any Arsenal fan.

Meanwhile, Granit Xhaka and Switzerland went through after a 3-2 win over Serbia, in which our man was given the Man of the Match award, and unlike some of the other players in this tournament, looked very happy with it. 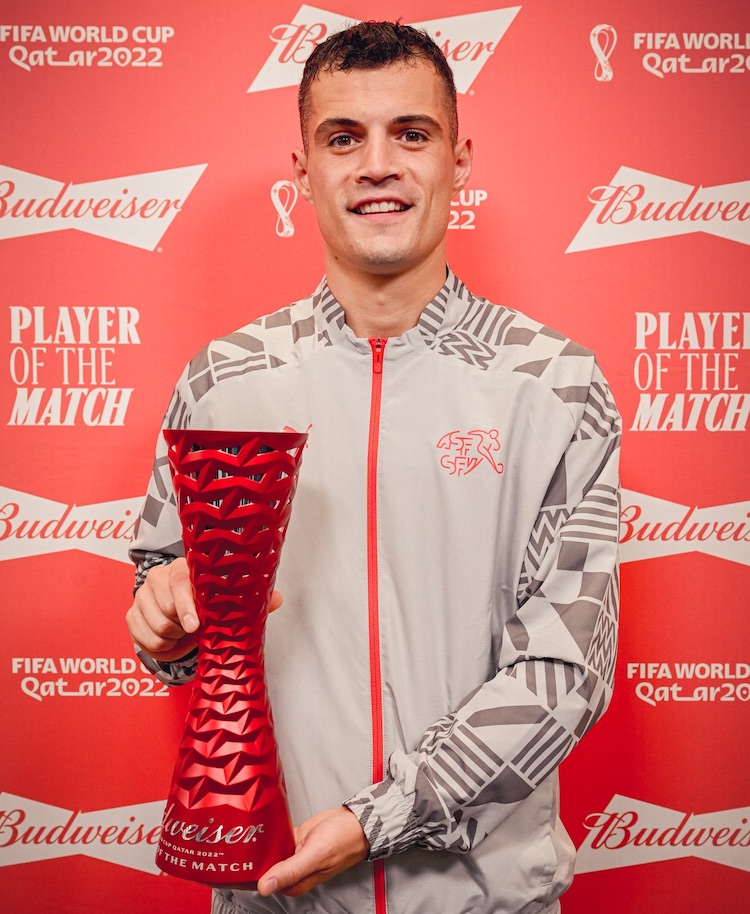 I thought some of the goals in this game were fantastic, and beyond a place in the Round of 16, there was a lot other stuff bubbling beneath the surface. There were, it’s fair to say, some shenanigans. Xhaka making the Serbian bench go nuts with … well … his nuts, was really quite funny, and the late pushing and shoving with their giant goalkeeper, Kratos, was something to behold.

I don’t know if you can say this is a new Xhaka, because he is who he is, but I think there’s now just a streak of maturity running through him which is good, because it makes this kind of stuff more effective. If you wind people up but then let yourself get wound up too, it kinda defeats the purpose. The best shit-stirring is when your own shit remains un-stirred. Anyway, I think it’s fair to say that Xhaka will have enjoyed the result first and foremost, but when you beat a team there’s some rivalry or personal history with, it’s even more gratifying.

Today, the knock-out rounds start with Netherlands v USA and based on what we’ve seen so far at this tournament, this should be a close game. I worry about the lack of end product in the American side – what they would give for a top forward to round-out their team – but I also think the Dutch are vulnerable. Hopefully it’s an exciting pme. Then later on we’ve got Argentina v Australia – on paper there’s a clear favourite, but this tournament has throw up surprises so let’s see.

Right, that’s it for this morning. James and I will be recording the Arsecast Extra later on this afternoon. Keep an eye out for the call for questions on Twitter @gunnerblog and @arseblog on Twitter with the hashtag #arsecastextra – or if you’re on Arseblog Member on Patreon, leave your question in the #arsecast-extra-questions channel on our Discord server.

We’ll have the pod for you early evening. Until then.