Tactics Column: Xhaka and The Blind Side

Rewind two years, or even one, and the idea of an opposition team having to come up with a way to deal with Granit Xhaka would have been laughable. You wouldn’t have even banked on him reaching 200 Premier League appearances for Arsenal. Yet here we are. Xhaka hit the 200 mark on Sunday and, with three goals and three assists to his name in just 12 games this Premier League season, the midfielder has been reinvented and reinvigorated by his new role.

The next question is whether he can keep it up as opponents pay him more attention and Sunday looked like a promising opening response. A year ago, and before that, Arteta’s Arsenal were predictable for opponents. Xhaka didn’t move upfield, the left-winger tucked in, the left-back pushed on, a front five was formed at the top of the pitch but it was easy to prepare for and the opponent could easily discuss who was whose man before the game and stick to the plan.

Stifling Mikel Arteta’s team has become a whole lot harder and Xhaka’s role is key. Just 692 league minutes into the season, Xhaka has now had more touches in the opposition area in 2022/23 (43) than in the 4,201 Premier League minutes he played in the previous two season combined (42).

He was, nominally, Ryan Yates’ man on Sunday. Yates would watch and follow Xhaka consistently, clearly looking to prevent him adding to his already impressive goal tally for the season. But Xhaka’s movement, and the way the Arsenal players now rotate positions, gave Yates and Forest a headache.

Typically, turning up in a 4-5-1 and looking to frustrate a superior side, you would look to keep the spaces between players as small as possible. But Xhaka’s movement dragged his marker around constantly and gave Arsenal team-mates space to play. It was common to see the Swiss keep his his position to pin Yates back and beckon Gabriel forward on the ball. With striker Taiwo Awoniyi forced to close down Thomas Partey at the base of the midfield, Arsenal easily created space for their defenders. If Forest were ever interested in pressing they would have had to alter their entire shape, with Xhaka keeping Yates honest by staying high upfield and outside him, playing on his blind side. 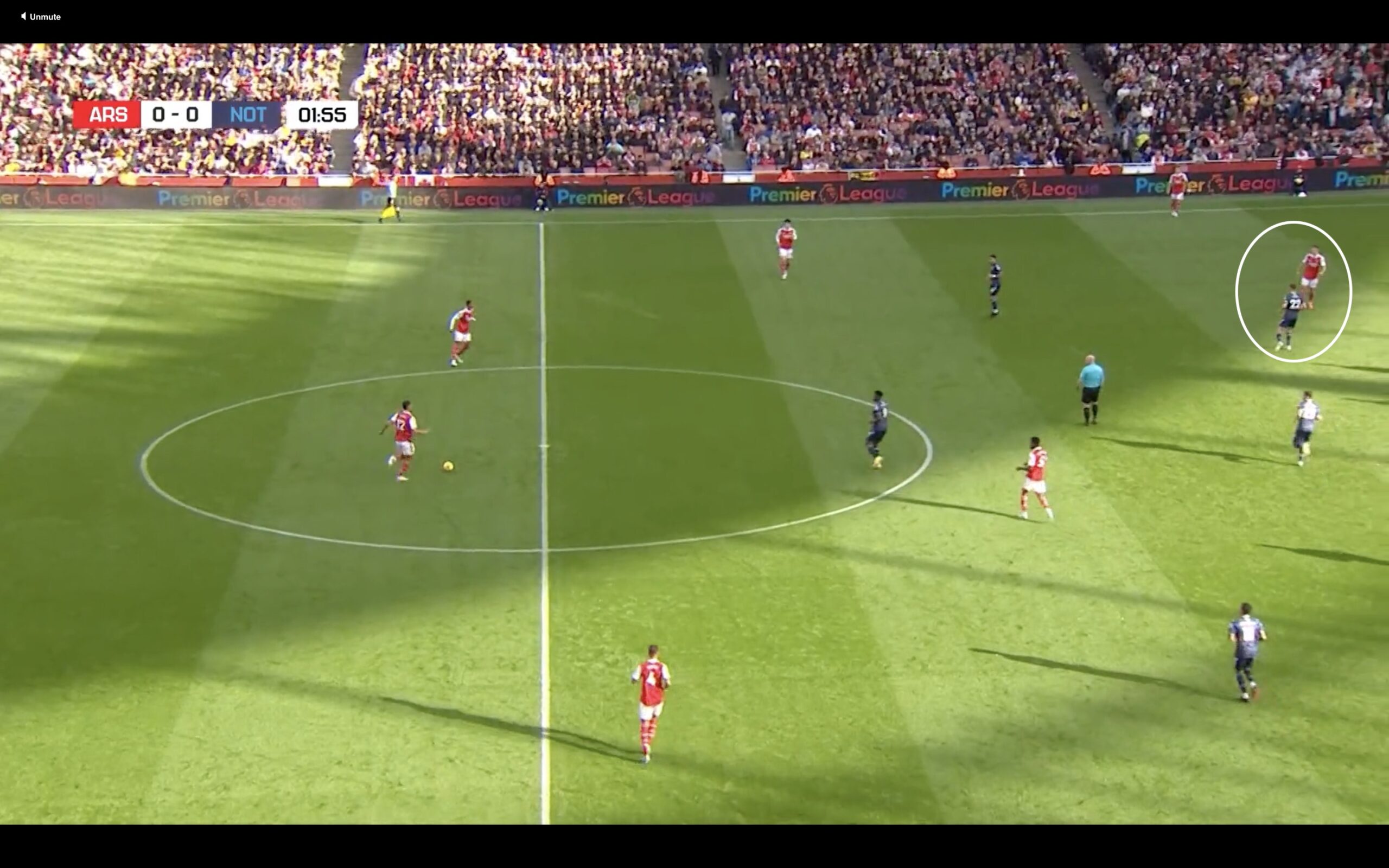 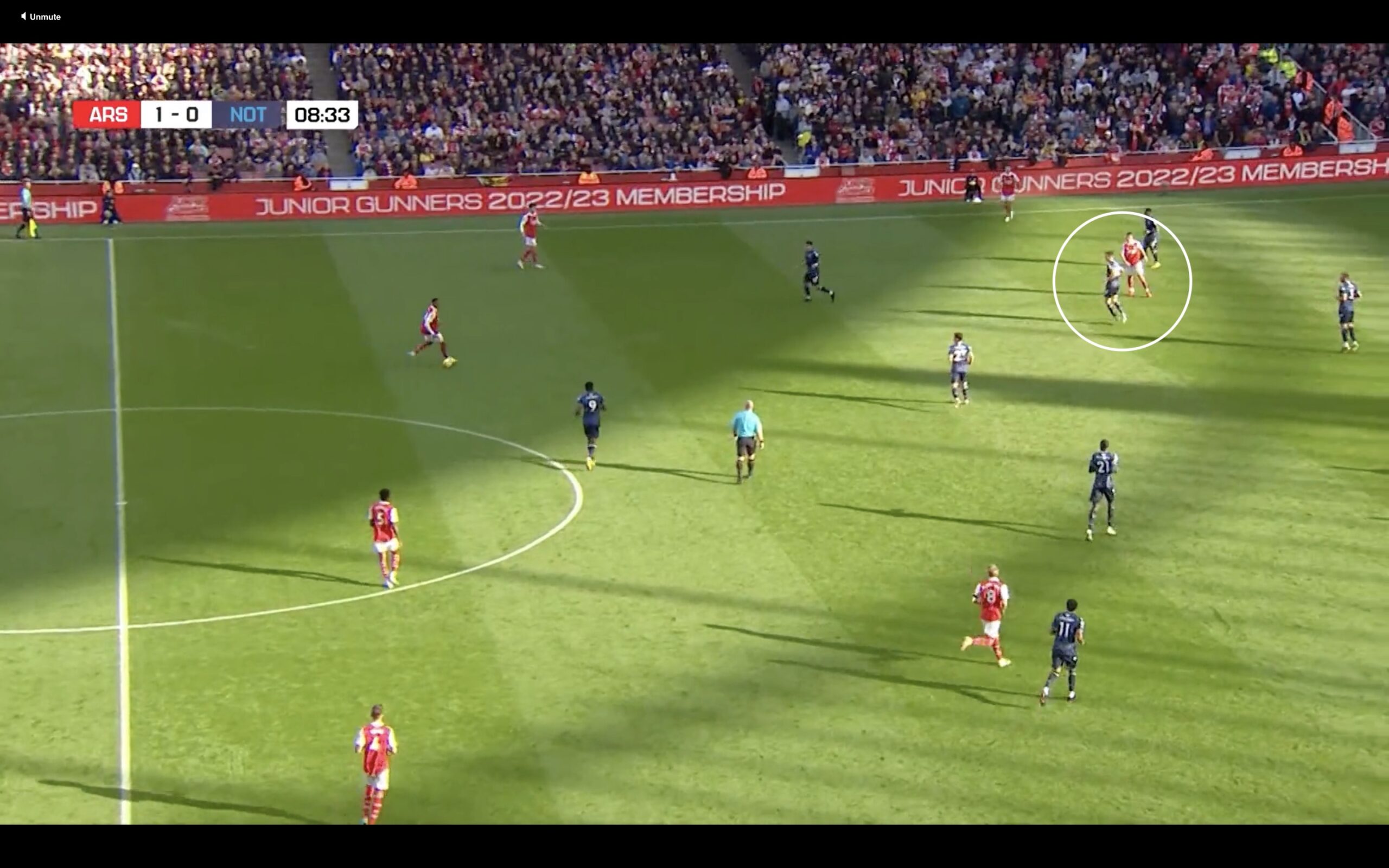 And in case it just looks like an accident that Yates, the Forest 22 is always tight on Xhaka — a case of simply being his direct opponent and not a clear plan to man-mark the Swiss — he followed him not just deeper or further upfield, but also wider. And Xhaka never had more space than a moment he popped up on the other side of the midfield having chased back on the break. Clearly on that occasion he was too far for Yates to follow and the message to stay tight had not been given to the entire midfield, just the one Xhaka was up against throughout.

So Xhaka staying high, like in the first few images, gave the Arsenal centre-backs time and space on the ball, stretching the pitch vertically and keeping the Forest midfield honest in its positioning, but even after that, Arsenal still had to create chances against what you would expect to be a compact midfield.

Xhaka’s movement came to the fore again here. He played outside Yates, at times drifting all the way to the touchline so the space in the centre of the pitch created could be used by Gabriel Jesus or Gabriel Martinelli. 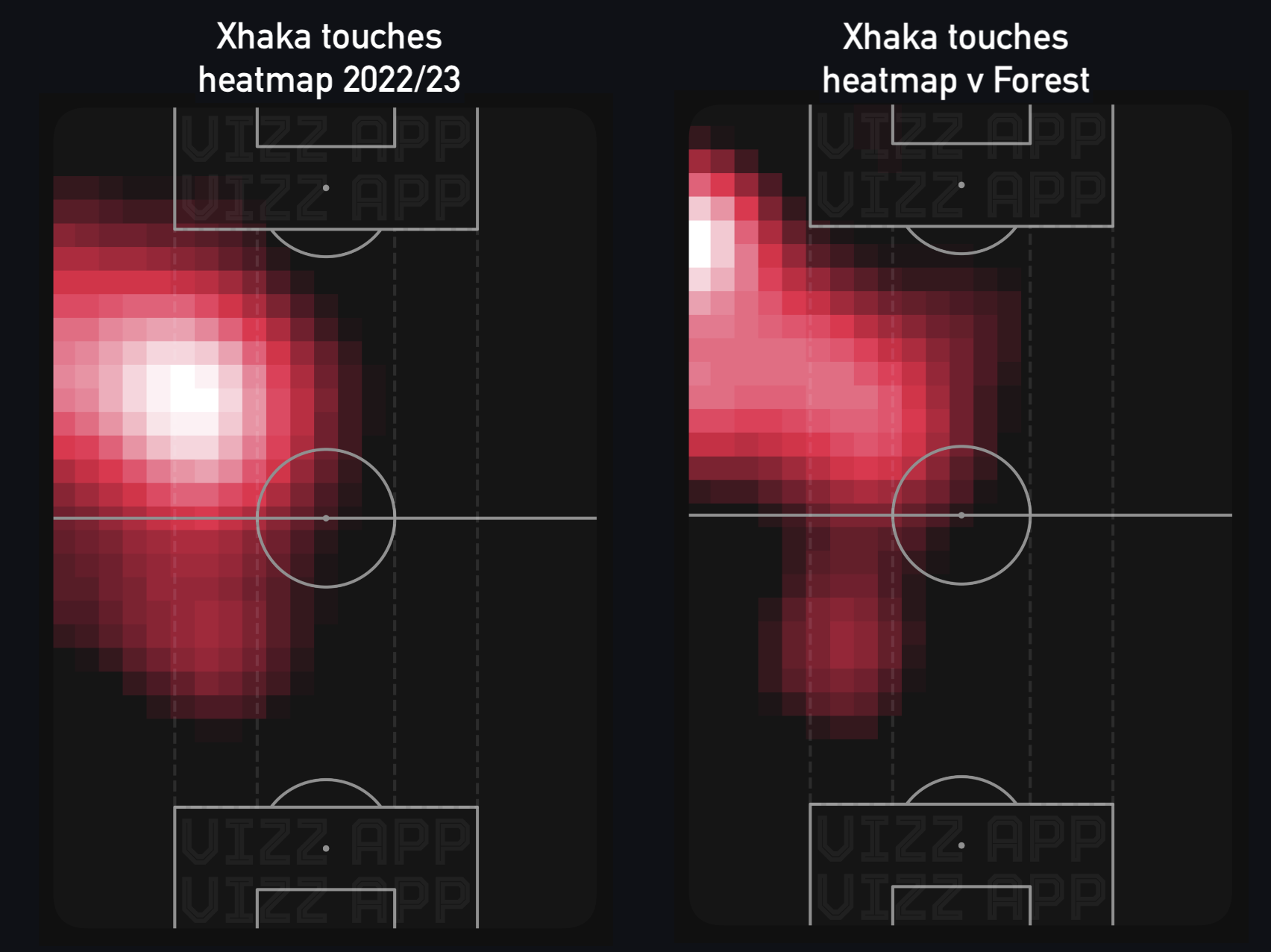 In the example below, Xhaka actually received the next pass, played wide by Thomas Partey as Serge Aurier followed Martinelli inside and vacated the flank … 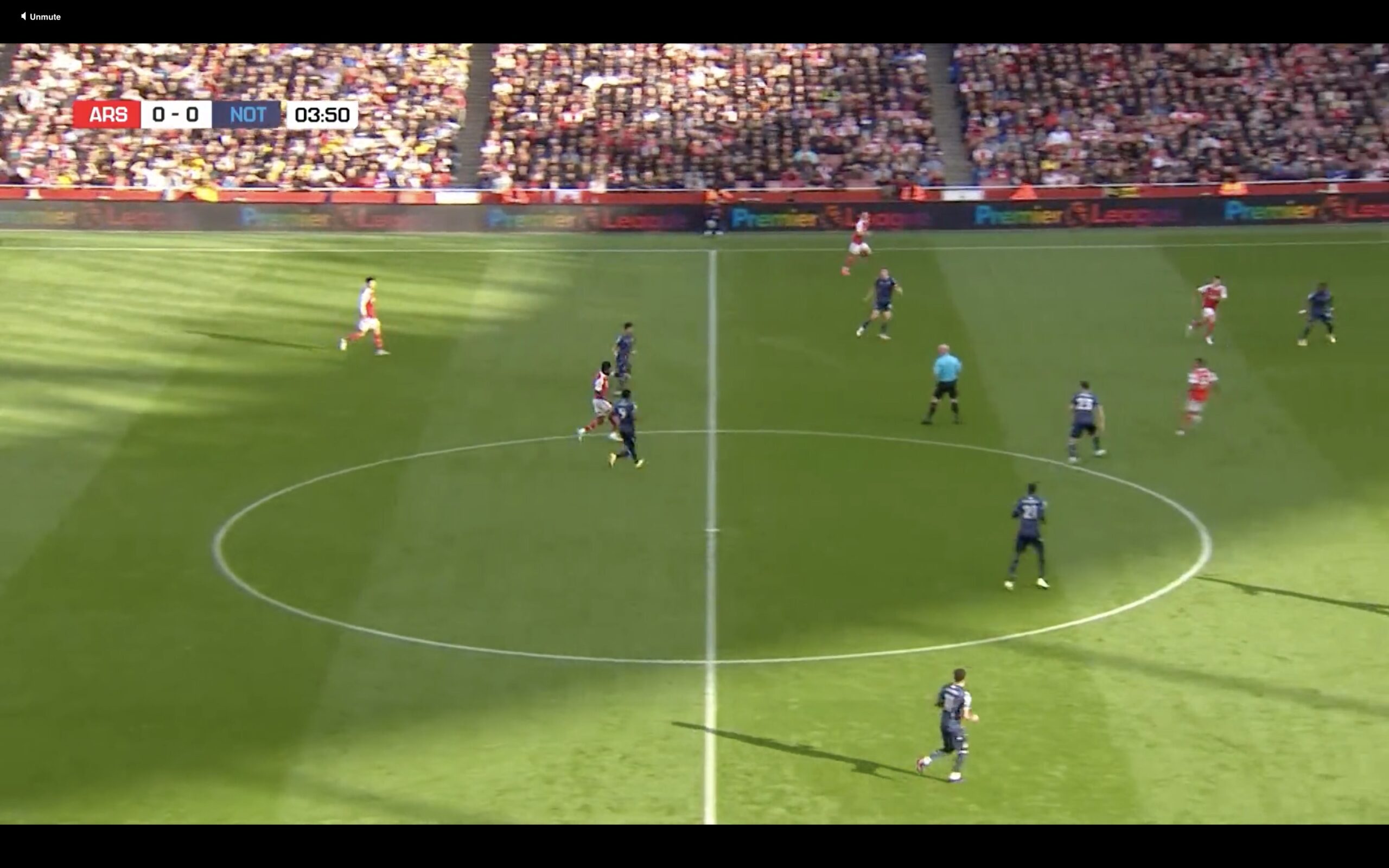 … but these situations often saw Gabriel Jesus pick up the ball. The striker received five progressive passes from Gabriel at centre-back on Sunday. Prior to the game, the defender had found his countryman with just 11 progressive passes all season.

That ball through the middle, and Jesus’ inclination to drop, allowed Gabriel Martinelli to attack the centre of the pitch too. With Forest looking to stay narrow and compact, Arsenal’s attempts to stretch them had Xhaka and Martin Odegaard both peeling wide, creating overloads on the flanks if and when the ball arrived, and leaving Forest with a dilemma: follow the midfielders and create space in the middle for the likes of Jesus, or leave them and end up outnumbered if the ball went wide.

Whether drifting out wide or sitting narrower, Xhaka’s positioning saw him constantly outside Yates (22), playing on his shoulder. 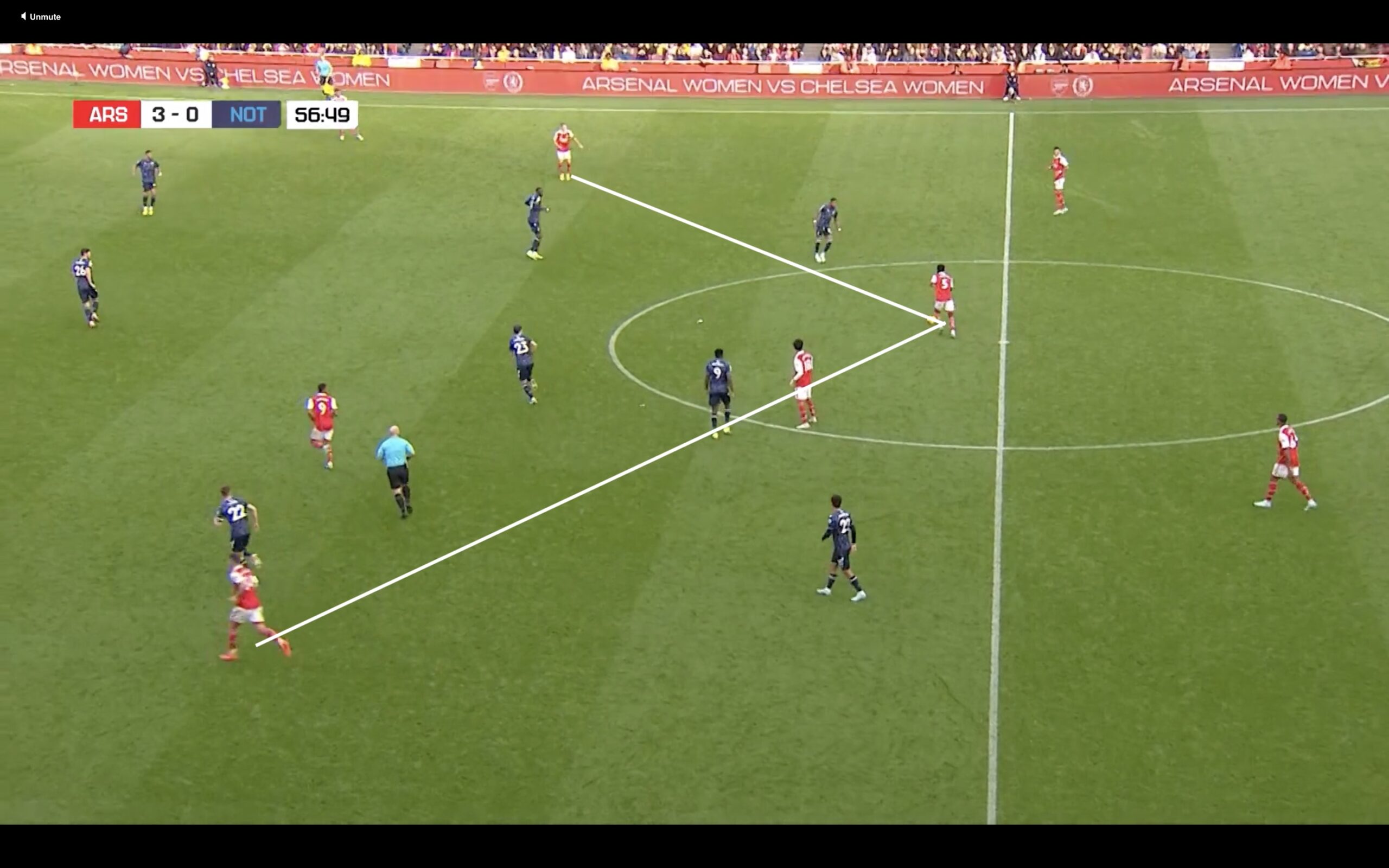 Steve Cooper’s side never found a solution and also didn’t actually manage prevent Xhaka from making the dangerous final third runs that have become something of a forte this season.

The midfielder’s wide positioning saw him repeatedly peel escape Yates’ attention before bending a run on the Forest man’s blind side. There were repeated warning signs in the first half, with one such run leading to a Gabriel Martinelli effort being cleared off the line, and others going unpunished as the weight on various passes just wasn’t right … 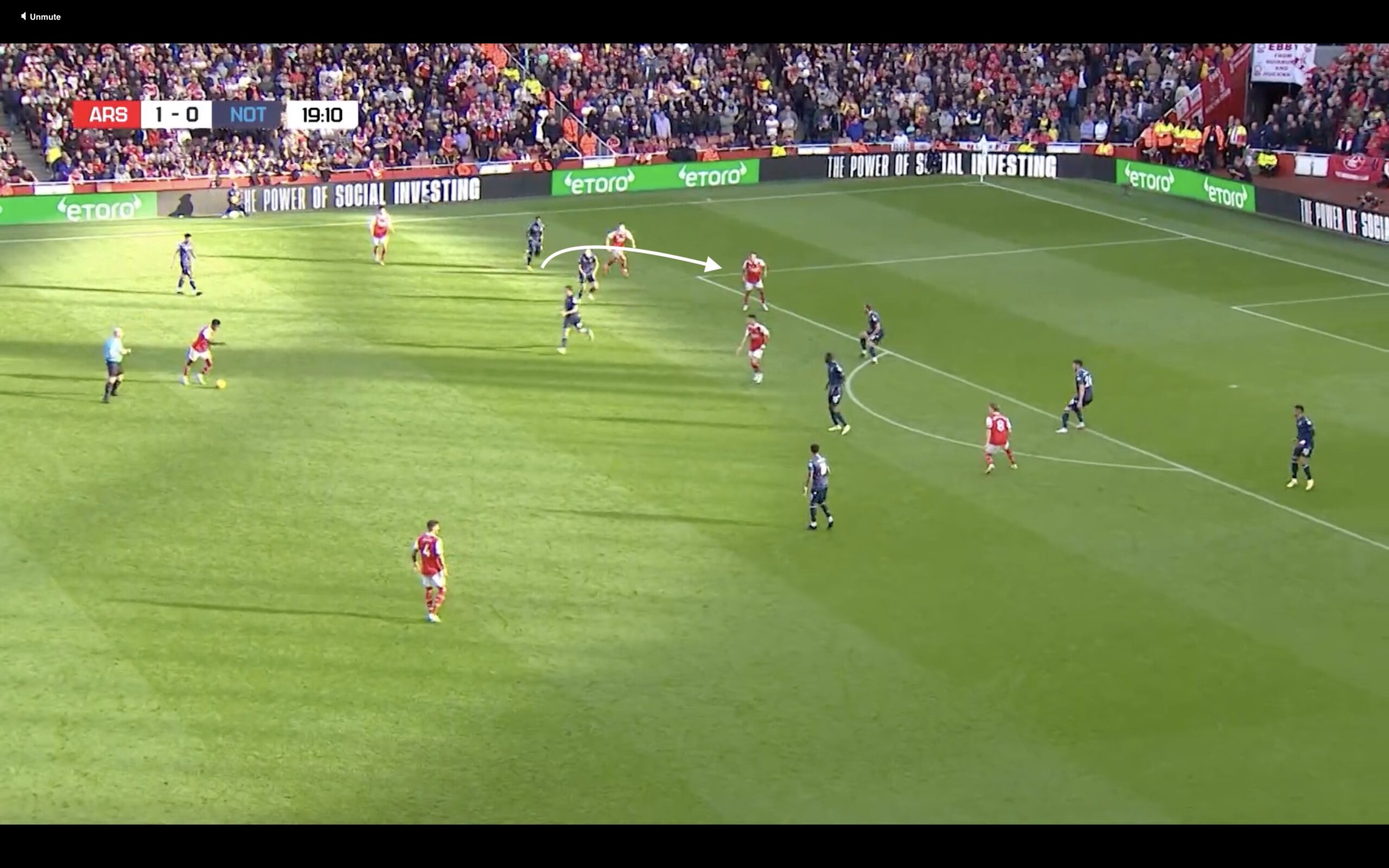 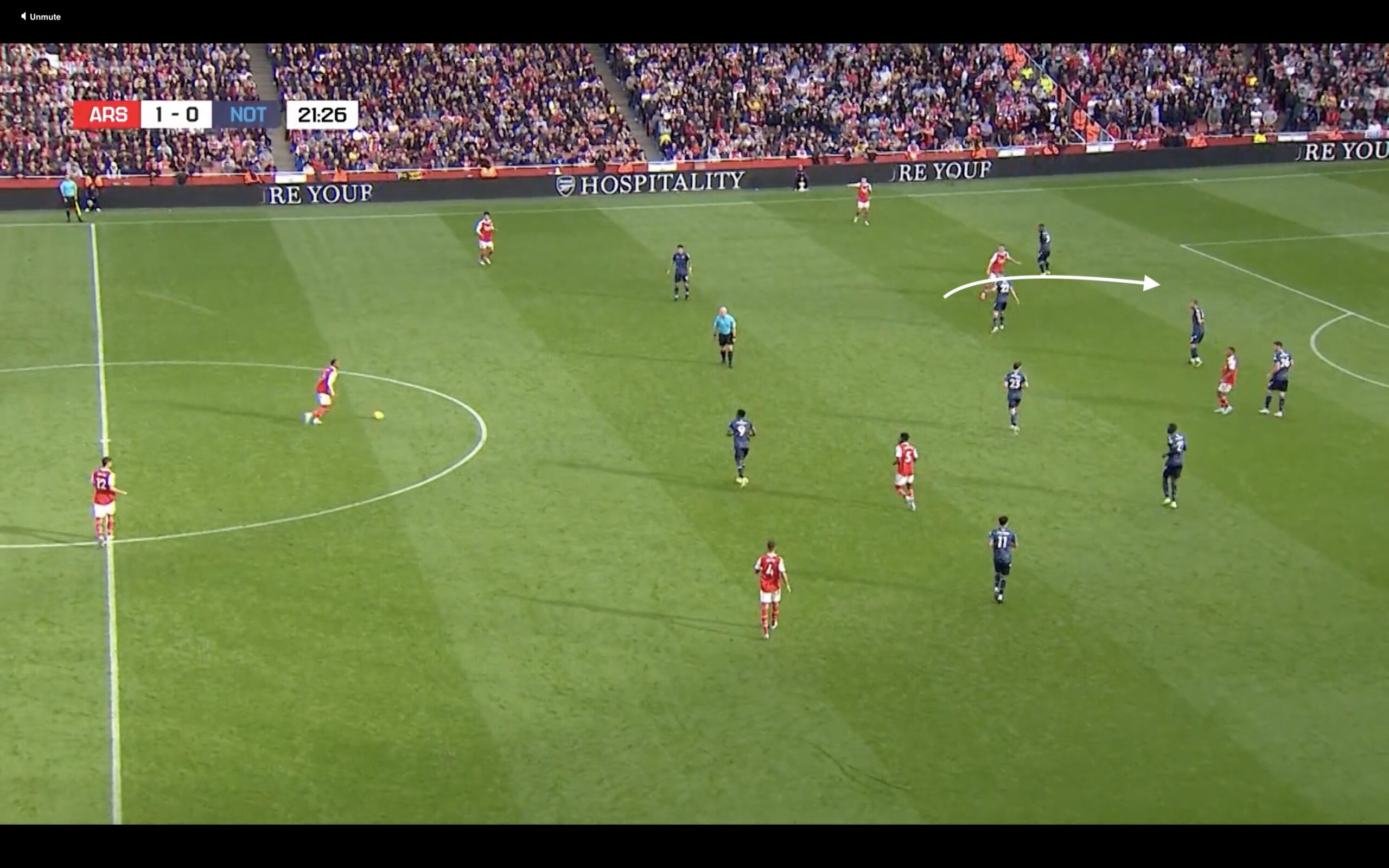 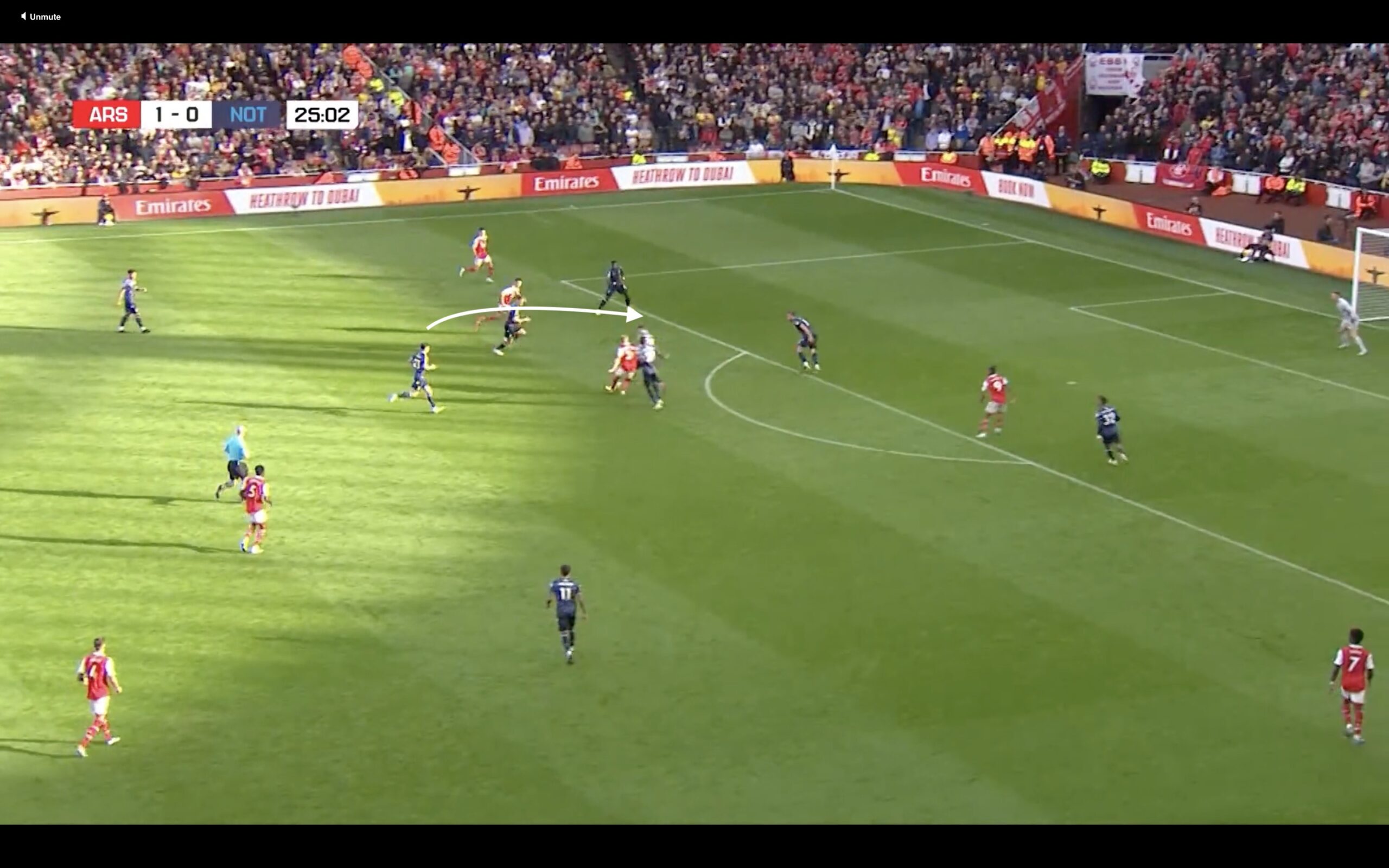 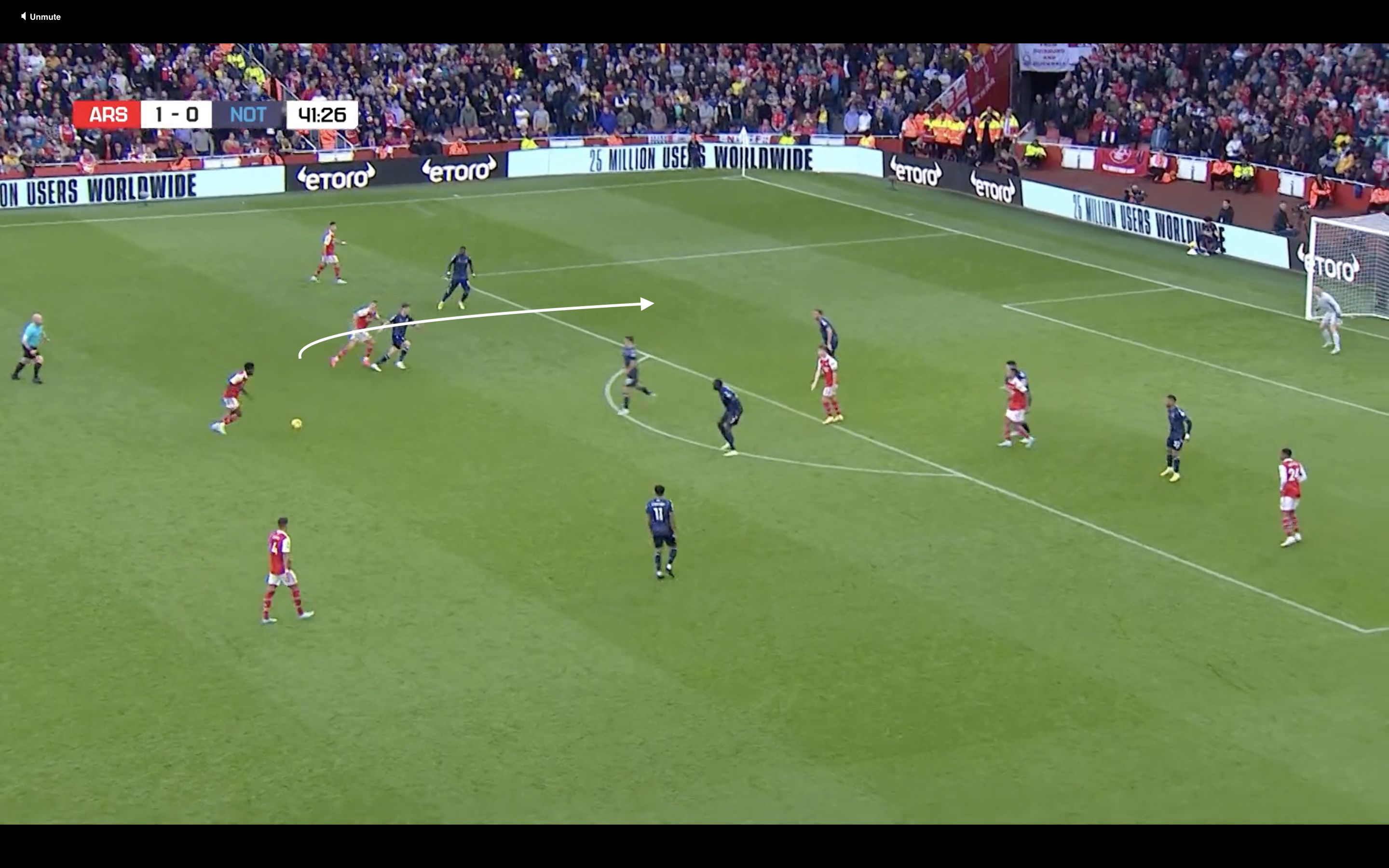 And then Arsenal were finally rewarded when another similar Xhaka run led to the second goal after the break. 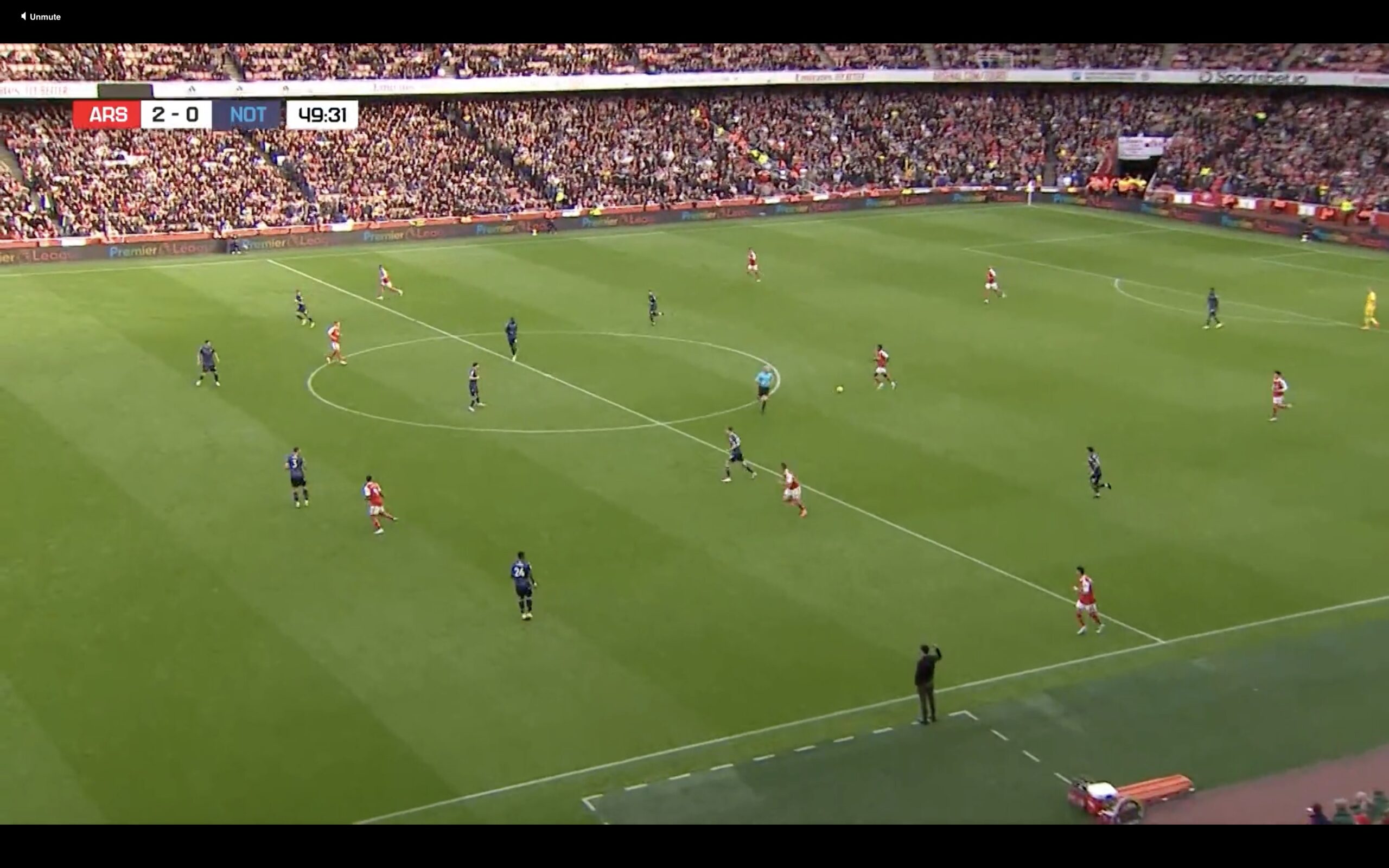 We saw a team have a clear plan to deal with Xhaka’s movement (seriously, what a sentence that is) on Sunday and we also saw it fail. He may lack pace but the midfielder has shown really sharp movement in his new role. Only 25 players have had more touches in the box than him this season and he leads the likes of Heung-min Son and Kevin De Bruyne in the stat.

Xhaka’s movement is good and he uses the presence of Martinelli on the left flank as it pulls defenders out wide and opens spaces to attack. Playing outside of the opposition midfield is nothing new but it was great to see it work against a team that looked like they really did have a specific plan to follow Xhaka on Sunday.

A new-look, more fluid approach to attacking began midway through last season but only this season has it started to look like it all comes as second nature. If Xhaka and his table-topping team-mates can stay fluid and unpredictable the will keep stretching teams and creating openings often enough to make sure this season is a huge success.

Previous articleArsenal top, others fester below
Next articleSaka, fouls, and a lack of protection