The chief tactical challenge for coaches in the modern game is setting up a team that is well-drilled and organised, yet flexible and unpredictable. With the ball, ideally, the entire width and depth of the pitch is used to stretch the opposition. Without it, you want pressure on the ball and spaces between your players to be minimal, essentially making the pitch as small as possible.

Arsenal currently look capable of all of the above.

In the opening weeks of the season, the addition of Oleksandr Zinchenko saw the ball gravitate towards the left. A midfielder for Ukraine, Zinchenko wants the ball and wants to dictate the game. He tucked infield, Gabriel Martinelli held the width outside him, and Granit Xhaka vacated the base of the midfield, playing higher up than Arsenal fans have seen him before to give Zinchenko room to operate.

The concern then, because we always need to have one, was that the right wing wasn’t delivering. That our game was maybe too concentrated to the left.

Fast-forward a few weeks and things have balanced out. Zinchenko has, of course, missed a few games in the meantime, and Arsenal have tilted to the right again. But that does not mean the left has become ineffective. Arsenal are considered, each player knowing their role according to where everyone else is. That has never been more obvious than it was against Brentford on Sunday, when the usual plan was adapted a little.

With the opposition playing in a narrow 5-3-2 formation, there was no need for left-back Kieran Tierney to tuck inside and clog up an already congested middle of the park. The space was outside, so that’s where Arsenal played. Tierney may not be the same player as Zinchenko but he has interpreted the position similarly this season. But at Brentford the shift infield came higher up the pitch and primarily as a defensive tactic, guarding against any possible counter-attacks, rather than a method to build attacks. In Arsenal’s own half, Tierney stayed wider than he has in previous games (as did Ben White on the other flank). He had more touches centrally further upfield but he is there to prevent counter-attacks when the ball is on the opposite wing more than he’s there to do anything in possession. 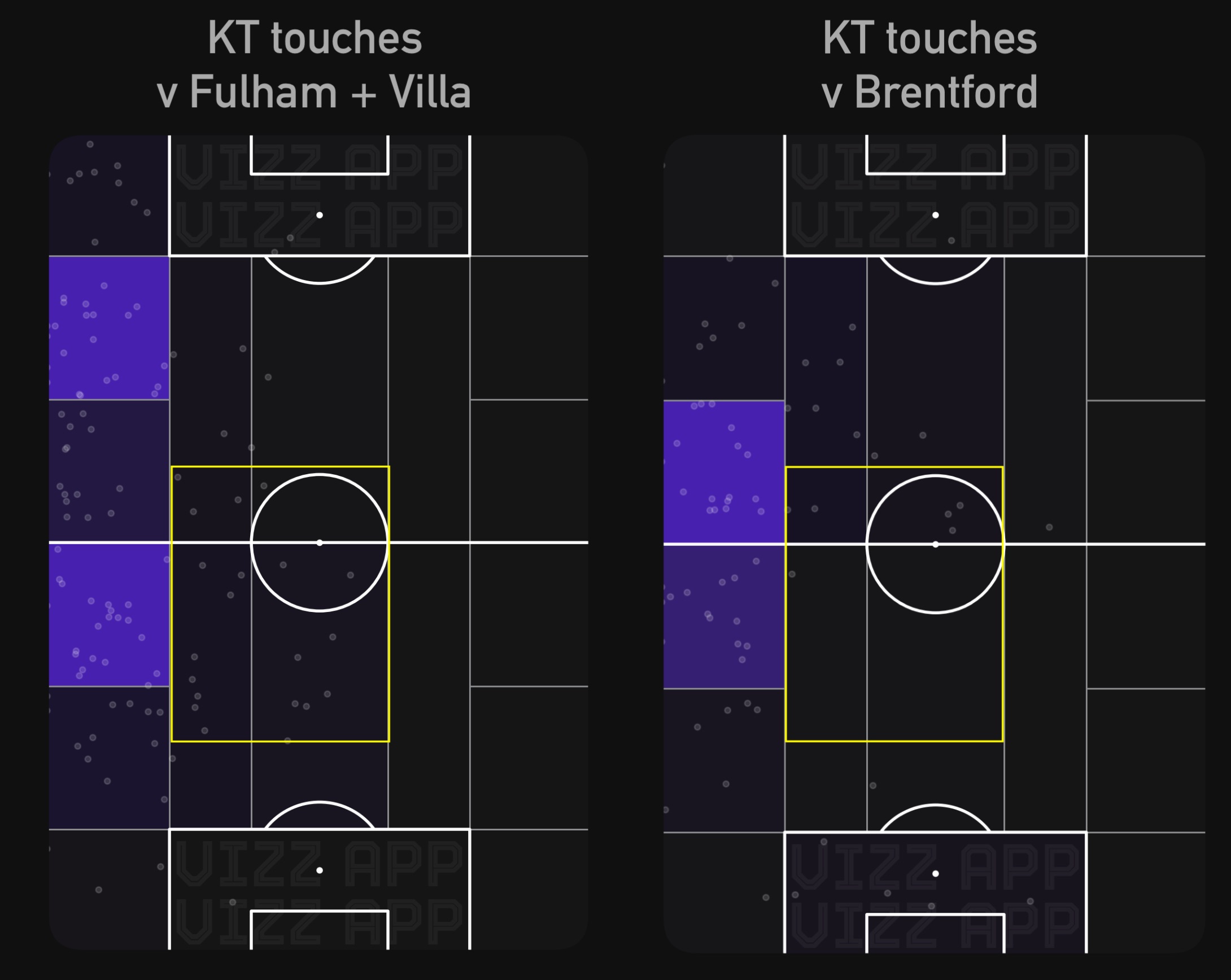 And that was just one cog in a synchronised, whirring machine. With Tierney wider, Gabriel Martinelli drifted infield more than he has previously this season, plugging gaps vacated by Gabriel Jesus as he dropped off of the Brentford backline (happy to either to bring a centre-back with him to create space for a runner, or happy to drift unattended and receive the ball in space) or gaps that were not being filled by Xhaka, who didn’t crash the box as we have become used to seeing. The Swiss had 67 touches, more than his season average, but just one in the box, compared to the four (Leicester, Fulham, Villa) or five (Bournemouth, Man Utd) we have become accustomed to. And that one on Sunday came in the opening two minutes of the game.

As those positions all rotated, gaps opened up on Brentford’s right. With all three centre-backs occupied and Arsenal leaning to the right-hand side, even a compact back five becomes stretched. In the opening two minutes, Granit Xhaka drove into space between the right-wingback (occupied by Tierney) and the right centre-back (attracted to Martinelli) to receive possession and almost lay on the opener.

When that gap appeared 25 minutes later it was quickly followed by a goal, with Brentford careful to fill it with a midfielder and Xhaka using the extra space outside the area to assist Gabriel Jesus.

A long passing move included Fabio Vieira in possession on the touchline, rotating with Bukayo Saka to create space and stretch Brentford before Ben White arrived on the overlap and Vieira found a chance to cut inside and switch play, with Xhaka in space and Tierney pinning the wingback on the flank. 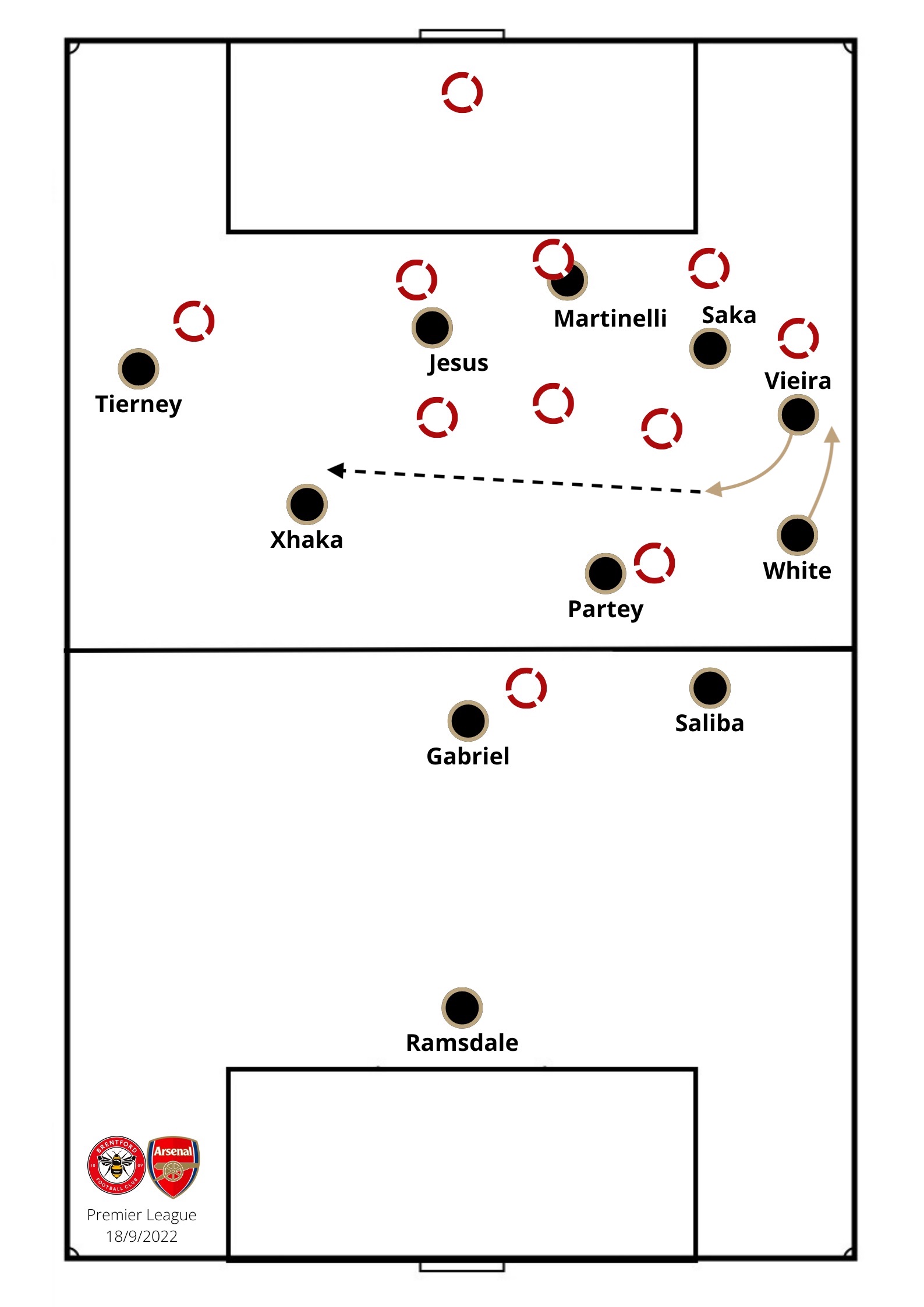 When the ball came over to the left, midfielder Josh Dasilva looked to plug the gap Xhaka had previously exploited, so the Swiss stood off in space, where Tierney found him. Martinelli dropped off to from the box to the left shoulder of Vitaly Janelt (the midfielder preparing to close Xhaka down) forced him to take one small step to the left, giving Xhaka an extra second to pick out Gabriel Jesus. 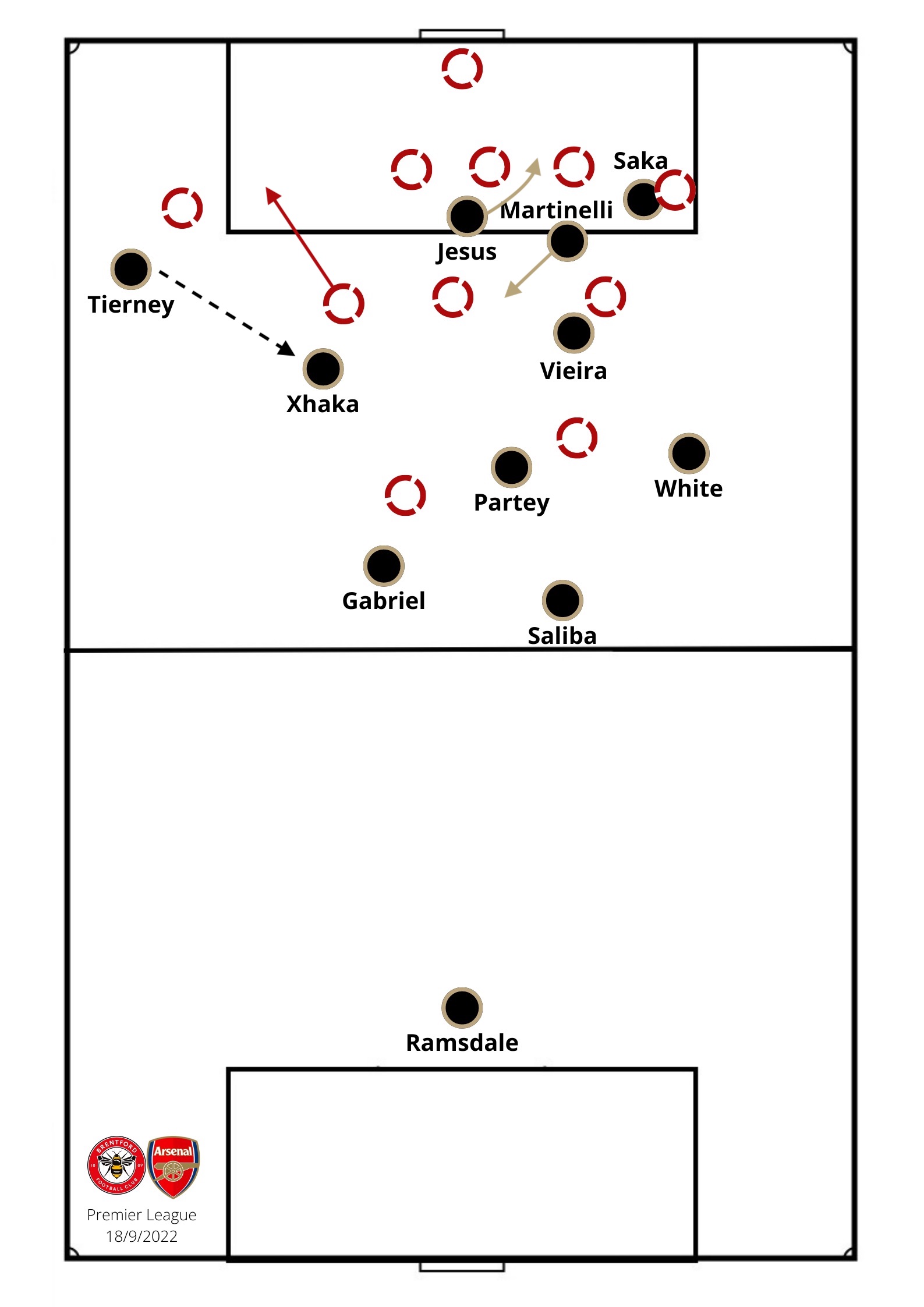 It seems like too small a thing to make any difference but the angle for Xhaka’s cross doesn’t exist without Martinelli’s positioning dragging Janelt one step across. The ball simply would have hit him.

Haven’t seen it mentioned by many that Jesus’ goal against Brentford had strong Haaland vibes.

An emphatic finish by the Arsenal number 9 seemingly out of nowhere.pic.twitter.com/51pWLciezp

The contrast couldn’t be greater that awful autumn of two years ago, when Arsenal were incredibly static. It was always obvious where each player would be and the team was easy to defend. Now the variety of movement and rotations make it hard for opposition players to know who to pick up, or whose job it is to cover a particular player. Arsenal are hard to defend against.

When Gabriel Jesus drops, runners move beyond him. If the left-back moves forward out wide, Xhaka sits deeper. When the left-back tucks in, Xhaka pushes wider or further forward, depending on whether Martinelli is holding the width or has drifted infield. And all that on the right too.

The pitch is being made big in attack but small in defence. Seconds after overlapping Vieira in the build up to the goal, Ben White drifts back inside with the ball on the left flank. A sloppy touch or a blocked cross shouldn’t lead to a dangerous break, with Arsenal completely smothering the two Brentford strikers if and when the ball falls for them. That’s how to sustain pressure and do so without leaving gaps waiting to be punished.

Stretch the opposition in attack, smother them in defence. The Arsenal accordion has us top of the league.