Good morning to you all and happy Tuesday.

I enjoyed Aaron Ramsdale’s post-game comments, talking like some kind of Bob Seger about how there’s a ‘fire inside’ this Arsenal team after the pain of the way last season ended. I like this, because while it’s an intangible, it’s also very real.

I’m convinced that the Invincible season doesn’t happen without the way the 2002-03 season played out. For younger readers and newer fans, with four games to go we were just three points behind Man Utd with a game in hand. We were +1 on goal difference compared to theirs, then Sam Allardyce’s Bolton kicked three of our players off the pitch and late Martin Keown own goal made it 2-2. Then, drawing 2-2 with Leeds at home, Mark bloody Viduka grabbed a late winner and that was that.

Looking back, the Arsenal response was immediate. We destroyed Southampton 6-1 in what became the first of 49 games unbeaten, but boy oh boy did those Bolton and Leeds games hurt. Not least because a couple of weeks before that, United’s 2-2 draw at Highbury – as the rivalry simmered and bubbled like a volcano about to explode – Sol Campbell got sent off because Ole Gunnar Solskjaer pretended he’d been elbowed in the face.

The frustration and the annoyance of that incident played out at Old Trafford a few months later when Ruud van Nistelrooy missed that penalty and the mayhem happened and who among us will ever forget Lauren throttling a terrified Phil Neville? Truly one of football’s most beautiful moments. 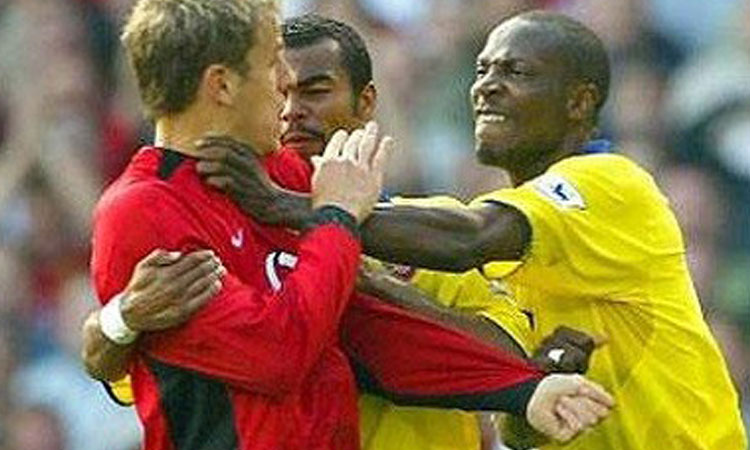 But the wider pain the end of that season caused was, to my mind at least, a huge motivation for the 2003-04 campaign. I’m not saying missing out on 4th is the same as being pipped to a title you were desperate to defend, especially against a truly hated rival, but it’s all relative, isn’t it? Last season we had that in our hands, then lost out to the old enemy. And in many ways, it was on us. We didn’t have the depth to deal with the final part of last season, and the idea that it was – in some way at least – self-inflicted probably stings a bit more.

So, if these players and this manager want to use that, then I’m all for it. Football is very often a game of fine margins. A missed tackle here, some poor positioning there, and that’s all it takes to change 3 points 1, or 1 to none. I’m sure that this week, there will be one or two pieces on the video analysis that Mikel Arteta uses to remind his players that sometimes you can get away with it, but if you can dig in and give it a bit more, those situations don’t develop in the same way.

I also liked Ramsdale talking about how they’re feeling the reaction from the crowd when we do concede goal. There was a moment of silence after Harry Kane scored his inevitable penalty on Saturday (point of order: we should stop giving away penalties), but that was followed by a rousing cheer from all sides of the ground to get the team going again. The Arsenal keeper said:

“Any time something has happened this season — Fulham, Leicester, when we concede a goal — it is like we have scored a goal with the noise the fans are making and it gives us a boost. It is a never-say-die attitude, the way I would word it is a ‘F*ck-it mentality’. Who cares we have conceded?

“We have got 10 minutes, 70 minutes, we will play our way. We never run out of time. That is the big thing for us and the manager — we don’t stop working.”

That ethic was very clear during All Or Nothing: what Arteta demands of his players at every moment, from training to the games themselves, is obvious. Compare what Ramsdale just said to the mentality of this team just before Arteta took over in 2019. He was at the Emirates as assistant to Pep Guardiola, and the look on his face as he sat in the away dugout spoke volumes as Man City never had to get out of first gear to beat us 3-0. That was a team that was defeated in the tunnel beforehand, never mind on the pitch itself.

We have to keep qualifying things because it’s ‘only 8 games’ this season, which is absolutely true, but it’s also true there’s a lot to be encouraged about due to how we’re playing, what we’re doing, and the fact we’re top of the table despite the terrifying efficiency and quality of Man City. Keep it up.

Ok, that’s it for this morning. Over on Patreon we have a new episode of The 30, in which we take do a 30 minute round-up of the weekend’s Premier League action, including some North London derby chat, Haaland, Brighton, lucky Chelsea and lots more. You can listen here if you’re a subscriber, and if you’re not, instant access to that and everything else we do on Patreon costs just €5 a month.