A big factor in Arsenal’s spring implosion last season was the loss of first-choice full-backs Kieran Tierney and Takehiro Tomiyasu. Losing Kieran Tierney to injury is, I think, considered the first sign of spring in England along with budding flowers, rising temperatures and the clocks going forward. Tomiyasu enjoyed an immense debut campaign- well, half a campaign anyway.

Muscular injuries dogged him in the second half of 2021-22. The upshot was that Arsenal finished the season with Cedric Soares and Nuno Tavares as their full-backs (most of the time). Fast forward to this season and Arsenal have bought Oleksandr Zinchenko and the long-awaited arrival of William Saliba has seen Ben White move to right-back.

Consequently, Tierney and Tomiyasu’s absences have not been felt. In fact, neither is probably an automatic first-choice pick at the moment. In a twist that can almost be described as irony, the door has opened for Kieran Tierney again because Zinchenko’s soft tissue has been a little bit on the spongey side lately.

To be able to alternate between Tierney and Zinchenko on the left-side has served an obvious upgrade on the situation last season when the talented but raw Nuno Tavares was played on the left in Tierney’s absences. (Though it is worth noting there was a point last October when Tavares was selected ahead of Tierney).

Ben White has been a revelation at right-back and, as a result, Tomiyasu has been eased back into the team following muscular issues and has been unable to force his way back into the team in any case. However, the Japanese international need not worry. The season is long and Arsenal will need him. What is interesting, however, is not just the increased depth at full-back that Arteta has at his disposal.

The situation is similar at right-back between White and Tomiyasu- if we assume that Saliba has impressed to the point that he is now considered an indispensable part of the back four (and Saliba’s rise is a timely reminder of the definite lack of definition in football- situations can change very quickly indeed).

Broadly, one of the reasons that I think Arteta has stuck with White is not just because the player has performed so well. I think he makes Arsenal’s shape slightly more aggressive. Most people know by now that Arteta employs the principles of positional play which means that there are pretty much always five players forward and five players behind the ball.

Tomiyasu proved to be such an inspired signing because of his ability to roll inside and create a back three while the left-back- Tierney- pushed right up on that side. Ahead of that unit of three, there would be a two-man midfield barrier formed by Thomas Partey and Granit Xhaka to his left, with everyone else advanced into the famed five lanes of attack (see diagram below). 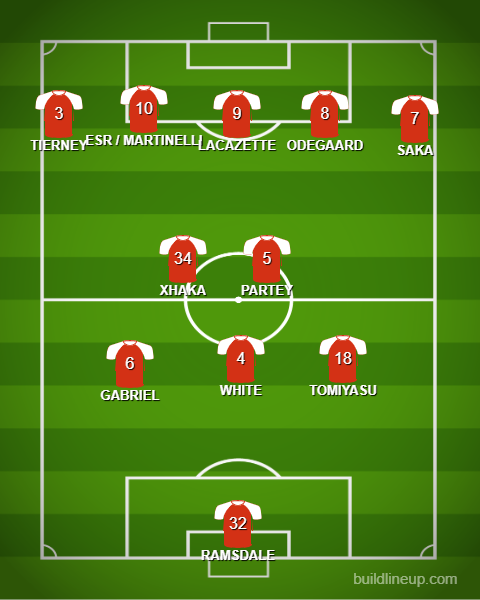 The introduction of Saliba into the right centre-half spot and Ben White at right-back, together with the addition of Zinchenko inverting into midfield has changed this 325 shape into slightly more of a 235 (see diagram below). Clearly there are lots of rotations within this structure, especially on the left, whereas the right tends to be a little more fixed, positionally. 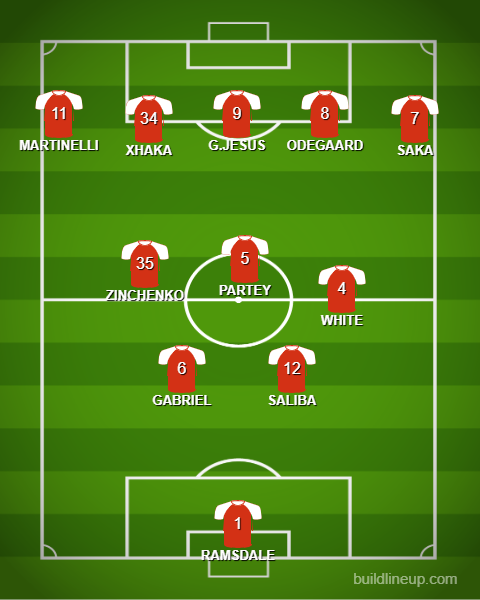 Zinchenko frees Xhaka to push forward but White, I think, plays that right-back role a little more like a third midfielder than a third centre-half. Whereas Tomiyasu is a right-back who plays like an auxiliary centre-back White is a right-back who creeps into some of those half spaces that we see Zinchenko in, just on the opposite flank.

Saliba is so good at defending the right channel that he can more or less be left alone. White advancing leaves the right-back space more vulnerable in theory. Crystal Palace tried to exploit this on the opening night of the season because their number one tactic is to hit Zaha early on the left. White and Saliba between them dealt very well with that tactic on the night and largely shackled Zaha.

However, Manchester United were able to expose Arsenal more effectively in these spaces. On Saturday, that is the exact space that Tottenham will want to hit too. Arsenal need to hope they repeat their shutdown of Zaha at Selhurst Park and not their exposure by Rashford at Old Trafford.

Back in May at Tottenham, that space was the responsibility of Cedric and Holding and we all saw how that turned out. What is interesting for Arteta is how he deploys his full-backs across the season. At Spurs, Mauricio Pochettino regularly rotated both of his full-backs but this was an acknowledgement of the physical feats he asked of them in ploughing the touchline.

White, Tomiyasu and Zinchenko all play a more reserved style, inverting into defensive and attacking spaces. I think a development to look out for is whether the full-backs come in pairs. We haven’t seen enough of the pairings to judge yet but I wonder whether, for example, Tomiyasu might be a very natural balancer for Tierney, while White and Zinchenko’s penchant for helping to control midfield might be complementary.

I suspect it won’t be quite as cut and dried as that but, all the same, what is clear is that the coach has four options across the two full-back roles and there isn’t a bad apple in the barrel. For now, I think White’s continued selection over Tomiyasu is due to a mixture of looking after Tomiyasu’s health and because White is simply playing too well to omit.

That’s a transient situation though and Tomiyasu will become more prominent in the coming weeks, especially given the tight October schedule. I will be fascinated to see how the full-back roles map out over the course of the season, whether Arteta will consider the four players as different horses for different courses or whether form and fitness will continue to guide the selections.