Oleksandr Zinchenko was a very welcome signing from Manchester City this summer for a number of reasons. His age and success profiles fit very much within the club’s transfer strategy over the last 12 months or so. Kieran Tierney has been available for just a touch over 50% of the Premier League fixtures that have taken place since he signed from Celtic in 2019.

His absences were too punishing for a team short on reliable back-up. However, what is really interesting about the signing of Zinchenko is not just his overall quality but how different he is from Tierney. Broadly speaking, Tierney is a winger converted into a full-back much like Ashley Cole was. He hugs the touchline and provides width and likes to whip the ball into the penalty area.

Zinchenko is a midfielder converted into a full-back. He inverts and often in the first three games has formed a double pivot with Thomas Partey at the base of the midfield. Tierney and Zinchenko are both established international players, there can’t be many teams in Europe that boast this kind of strength-in-depth at left-back.

I think one of the most fascinating questions for this season is whether their differing profiles will prove to be a good thing or a bad thing, particularly for Tierney. The Scot seems to be the most vulnerable of the two given that Zinchenko is newly signed and Kieran has such a chequered medical history. The Ukrainian held the shirt for the first three matches before he was himself injured.

Now, a lot of that was because Tierney’s pre-season was deliberately cooled and elongated after a season-ending knee injury at the back end of the previous campaign. Having two very different profiles of left-back could well be a good thing for Arsenal and for both players- especially since Zinchenko can also play in midfield.

That’s another fascinating facet of the signing. Zinchenko can offer support and competition to Tierney and Xhaka, both of whom have spent their entire Arsenal careers to this point as automatic picks. A range of profiles could provide texture and flexibility to the squad, offering different solutions for different problems.

At Crystal Palace for example, Zinchenko was outstanding in the first half as the Gunners monopolised the ball. In the second half, the team came under pressure and while Zinchenko is a superior technician to Tierney, the Scot is the better one-on-one defender. Tierney came on for the final section of the game at Selhurst Park and Arsenal looked more secure defensively whilst retaining counter-attacking threat.

However, having two very different profiles of player can also be problematic for a squad. It can unbalance a team and cause too much disruption to swap between them. A couple of weeks ago, I highlighted how Zinchenko and Xhaka often swapped positions while in possession. Below offers just one example.

Whereas Tierney stays largely on the interior of the team. Here we see Arsenal building play against Fulham, a game for which Zinchenko was unavailable. In this match, Tierney did invert into midfield but with nowhere near the regularity (and comfort) of his Ukrainian counterpart.

Neither of these approaches is inherently superior, it just means that Arsenal operate in a slightly different way. Again, this could simply add variety to Arsenal’s game or else it could confuse it. The end result will, in my view, be largely down to Kieran Tierney and how he develops his game. He ought to take Zinchenko’s arrival as a challenge and a positive one.

We must be careful not to fall into new, shiny toy syndrome with Tierney and disregard his abilities simply because Zinchenko is fresh out of his cellophane. There are elements I think the Scot can add to his game, using Zinchenko as a model. While I believe Tierney to be a better one-on-one defender, Zinchenko can help the team to defend better through possession.

Zinchenko On The Ball 😎 pic.twitter.com/T3HUPIiLya

In the example above, Zinchenko remains calm under fire and regains and retains the ball. Not only does he snuff out the danger but he retains the ball and Arsenal can mount another attack. In comparison, Tierney’s first defensive action against Fulham illustrates a development point. Tim Ream hits a long diagonal towards Bobby Bobby Decordova-Reid and Tierney reads the play comfortably.

However, instead of trying to bring the ball down and retain possession, he elects to head the ball clear into space and Fulham win a throw-in. He clears the initial danger but cedes possession in doing so. This is not a terminal flaw, simply a crease to iron out. The challenge to Tierney is to add technical layers to his game without losing the good Kieran Tierney actions that he does.

Against Fulham he came inside to support Elneny in midfield but not as often as Zinchenko does. That is fine, if he can sprinkle some of that seasoning to his game, he doesn’t have to be a working facsimile of his Ukrainian counterpart. Inverting is a relatively modern phenomenon for left-backs, most of them wouldn’t have been doing it in their youth teams.

In the Aston Villa game, Tierney inverted far less frequently, which was, almost certainly, down to instruction. With Albert Sambi Lokonga at the base of the midfield, Xhaka had a brief to stay much closer to the young Belgian and mind him through the game. This meant less complication in terms of Xhaka and Tierney swapping positions. This is where having a different profile of left-back came in very handy, Tierney playing his natural game on the outside was what Arsenal needed. 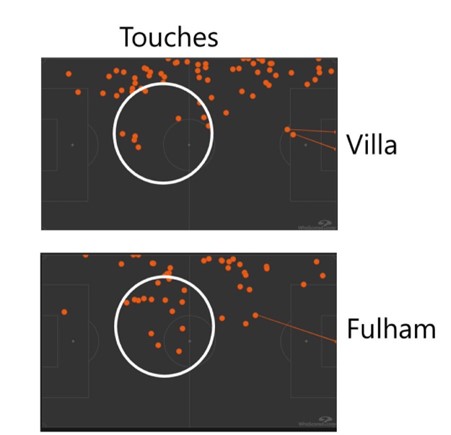 The signing of Nuno Tavares last summer suggested that Arteta was interested in a left-back who could invert. The Portuguese has the incredibly rare attribute of being very two footed (an especially rare trait in a left-back), meaning that he could drive inside as well as outside with the ball. The issue for Tavares was not only the fact that he struggled to switch on defensively, but that he can be loose in possession.

We know that Tierney can operate in a dual role, he has done so for Arsenal before. When Arteta moved to a back three during his first season in charge, Tierney played on the left of the three centre-halves. When Arsenal had possession, Ainsley Maitland-Niles at left wing-back would often drift inside into midfield, leaving Tierney to roll outside and play on the extremity of the pitch. This is the role he operates in for his country.

On this occasion, he was rolling from inside to out and in a more defensive zone. Now he will be asked to move outside to in and in an area where he might come under more pressure on the ball. However, his understanding of spacing is clearly good enough to play a dual role. If he can add this to his game and, crucially, stay fit, he could bring the focus of competition onto Granit Xhaka.

Zinchenko would almost certainly do a lot of the same things in the same spaces whether he started at left-back or left central-midfield. If what he adds does become truly indispensable then Tierney can deflect the question mark away from himself and onto Granit Xhaka (though the Swiss is in excellent form). It’s also important to understand that different opponents provide different challenges.

Last season, Emile Smith Rowe and Gabriel Martinelli shared the left-forward role. They both executed it in slightly different ways and responded to the challenge issued by the other. Smith Rowe added the end-product Martinelli had always threatened and the Brazilian cleaned up on his technical fundamentals. Both have become better players for it, seeing attributes in the other and looking to add them to their own games.

Tierney should see this challenge in much the same way. As the season wears on, there will be games where his ability to go outside and provide threat from wide areas will be required. His challenge is to make sure that isn’t an occasional Plan B style need, while adding another layer to his game and becoming a more complete full-back in the process. Otherwise, the risk will be that he becomes a square peg trying to cram himself into a round hole.

Previous articleArsenal 2-1 Aston Villa: Double Gabriel all the way …
Next articleDeadline day a dud + thoughts on the summer window