In the 50th minute of the game against Everton on Monday night, Ben Godfrey committed what felt like his 10th foul of the night. Of course he was lucky to still be on the pitch having somehow escaped a red card for putting his studs into the face of Takehiro Tomiyasu as the Arsenal right back was on the ground. There were shades of Danny Rose during the Watford game a few weeks ago when he was allowed career around the pitch clattering and battering everything he saw in red and white, remarkably going through the 90 minutes without a booking.

For the foul below – which is a bit blurry but you can see he’s late, over the ball and studs up into the bottom of Saka’s shin before landing on his foot – he got a yellow card. Some Arsenal players remonstrated. Lacazette was there asking the question of referee Mike Dean. He was backed up by Odegaard who flashed the ‘card’ sign; Martinelli came over; Xhaka trundled across. 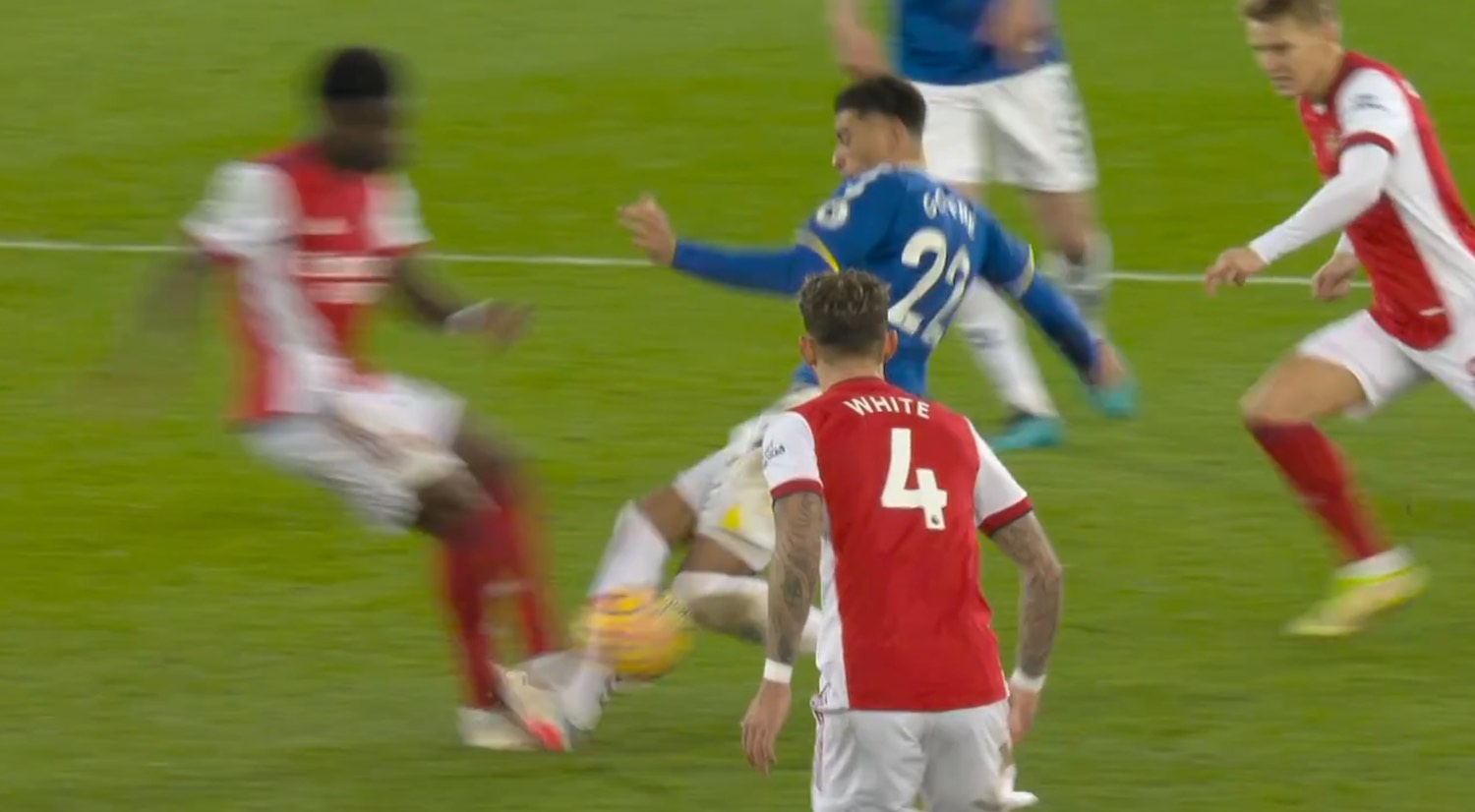 That’s pretty much what you want to see, but while I accept that we have some bigger issues we need to take care of when it comes to our football and our recent results, this is an area we can improve in. If one of the aspects of our recent recruitment has been to change the character of the team, let’s see a bit more of it.

Bukayo Saka was fouled 5 times during the Everton game. It’s second time this season he’s endured that many fouls in a game, the other was against Aston Villa. In the 1-0 win over Norwich he was fouled 6 times. He is clearly and repeatedly being targetted by the opposition. I’m not saying every foul is an egregious one or a potential leg-breaker, but it stands to reason that if you are fouled a lot, your chances of picking up an injury are exponentially higher.

So, I did some digging into stats about how often our players get fouled, and this opposition focus on Saka is not new. Here’s how it matches up to some of our other players who played regularly last season and this, in positions where you expect them to be fouled.

There are obvious reasons why one player might get fouled more than another. When you’re good and your team needs you, or is even reliant on you, you get the ball more. Jack Grealish with his heavenly calves is a great example of this. Last season he was fouled 123 times in the Premier League, which is still some way short of the previous season where that tally was 180 (what a bullseye he was). But then a lot of Villa’s plan was basically give it to Grealish, let him run and dribble at the opposition, get fouled and go from there.

I don’t think Arsenal are anywhere near as reliant on Saka as they were on Grealish, but the foul tally tells you plenty. It says that we do give him the ball a lot, and that the opposition know he can hurt them when he has it, so they do what they need to do to stop him. I can’t be alone in wincing every time he goes down, fearing an injury, and I don’t think there’s a single Arsenal player that takes such a battering on such a consistent basis.

So, coming back to my earlier point, I want to see Arsenal players backing each other up when they get fouled. It’s not as if we need to go full Roy Keane leading the charge of United players into the face of Andy Durso, but get on top of it. When an opponent lands his studs on the face of one of your teammates, don’t stand for it, either with the officials or that player. I know it’s a fine line between reaction and retaliation, but I do wish we’d be a bit less passive around serious foul play and incidents like Tomiyasu, or the Saka/McArthur one in the Crystal Palace game (another absurdity that a red card wasn’t issued).

I obviously don’t know what happened in the dressing room at Goodison Park on Monday night, but a bit of siege mentality might have been useful going into the second half. I don’t get the sense that was in play. Afterwards, Mikel Arteta said of the Tomiyasu incident:

That decision was made, I’m sure the VAR reviewed it and what I want is more from my team.

I understood it at the time. On this blog I said that we couldn’t use that decision as any kind of excuse, and I still believe that. However, on reflection, I think Arteta could easily have made the same point. I understand it’s more difficult for managers, especially in the heat of the moment post-game when he’s got cameras pointing at him and frustration levels are high, but maybe going public on how unhappy he was with that decision might have a bearing on future decisions and provide some protection to his players. We’re not just talking about a 50/50 which went a bit too far one way here, we’re talking about an opponent who deliberately landed his studs on the face of an Arsenal player.

You can acknowledge that Arsenal weren’t good enough and also make a point of this. Mikel Arteta is an intelligent man. He can find the words. I get there would be a cohort who would accuse him of making excuses, but you can’t avoid saying things because basic comprehension is a challenge for some people.

Ultimately, I want this team to achieve and I have doubts about that for obvious reasons. It’s also impossible to measure intangibles, like character and desire, but we’ve seen Arsenal sides in the past respond positively to incidents when it feels like we’ve been on the end of an injustice. There have been a few this season, not massive ones, but enough to sow the seeds of an us against them mentality which might genuinely be useful in games when the slide-rule, precision-based football isn’t enough.