After the Everton game, Mikel Arteta was asked why he chose to leave Nicolas Pepe on the bench again. He replied, in typical fashion, by saying nothing much about the Ivorian, and spoke instead about his decision to throw on Eddie Nketiah.

I decided to play Eddie today, to bring him on and he created three chances and hit the post once in 25 minutes.

Which is fine. Nketiah did have a positive impact, although hitting the post from a couple of yards out was a glaring miss. Another one that felt huge because we don’t make enough chances, and a few minutes later especially so because Everton won the game late on. He then went on to explain why a striker who has rejected a contract offer in the last couple of weeks was preferred to the club’s record signing, saying:

He does every day in training what you saw in 25 minutes here. Every single day. That’s why I picked him.

Again fine, but if that’s your thinking, it raises some questions. Has this been a new development? Because until the last two games, Eddie was barely involved in our Premier League season. 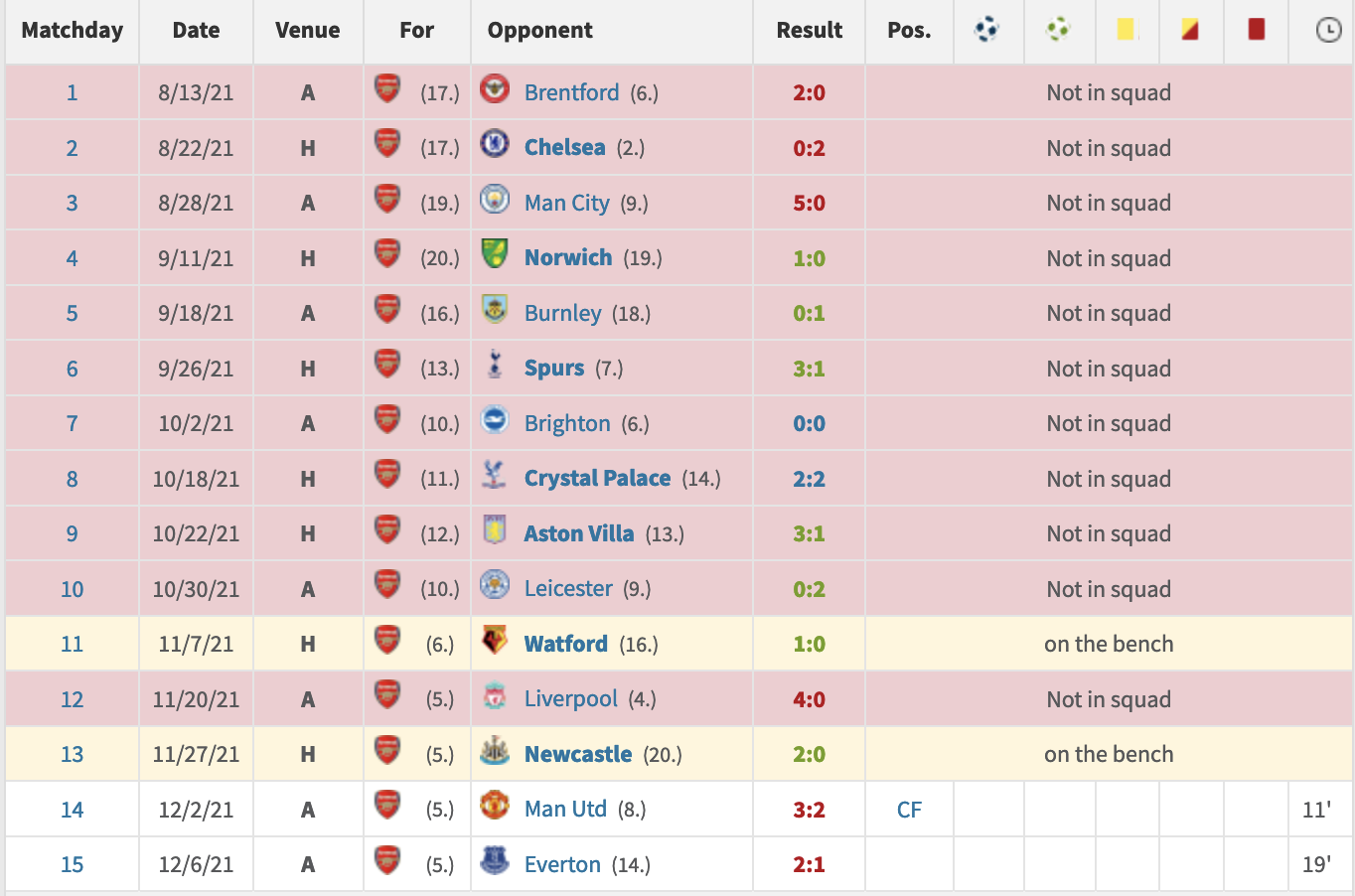 Zero minutes in the Premier League until December. Then he is thrown on as a kind of Hail Mary at Old Trafford, and then against Everton. What was his training like before then? If it was so good and so consistent, surely he’d have been involved before now? Why the about-turn on his importance?

It seems likely to me that Eddie Nketiah’s training this season has been pretty consistent. I can’t say for sure, but I’d wager he’s a good young professional who works hard, does his best and his performance level at London Colney hasn’t changed a great deal between August and now. It might make people wonder then if Nicolas Pepe hasn’t been doing the same, but if we’re to make the initial assumption about Nketiah, we have to give Pepe the benefit of that doubt too. If he was well below par, or simply not making the effort, surely he wouldn’t even be in the squad. It’s not as if there isn’t precedent for that in recent times.

I’ve seen some chat about how Pepe is now on 98 first team appearances for Arsenal, and perhaps there might be a payment triggered at 100. I have no idea if that’s the case or not. It sounds like a nice theory, the kind that does the rounds a bit from time to time, but how true it is, I can’t say. I suspect not very.

What is unquestionable though is that Arsenal have a Pepe problem. Whether you think Mikel Arteta has created a Pepe problem or that the Pepe problem has been thrust upon him is a matter of personal opinion. Perhaps it was always there, but recent weeks have just exacerbated it. He played a bit at the start of the season, but then the minutes started dwindling: 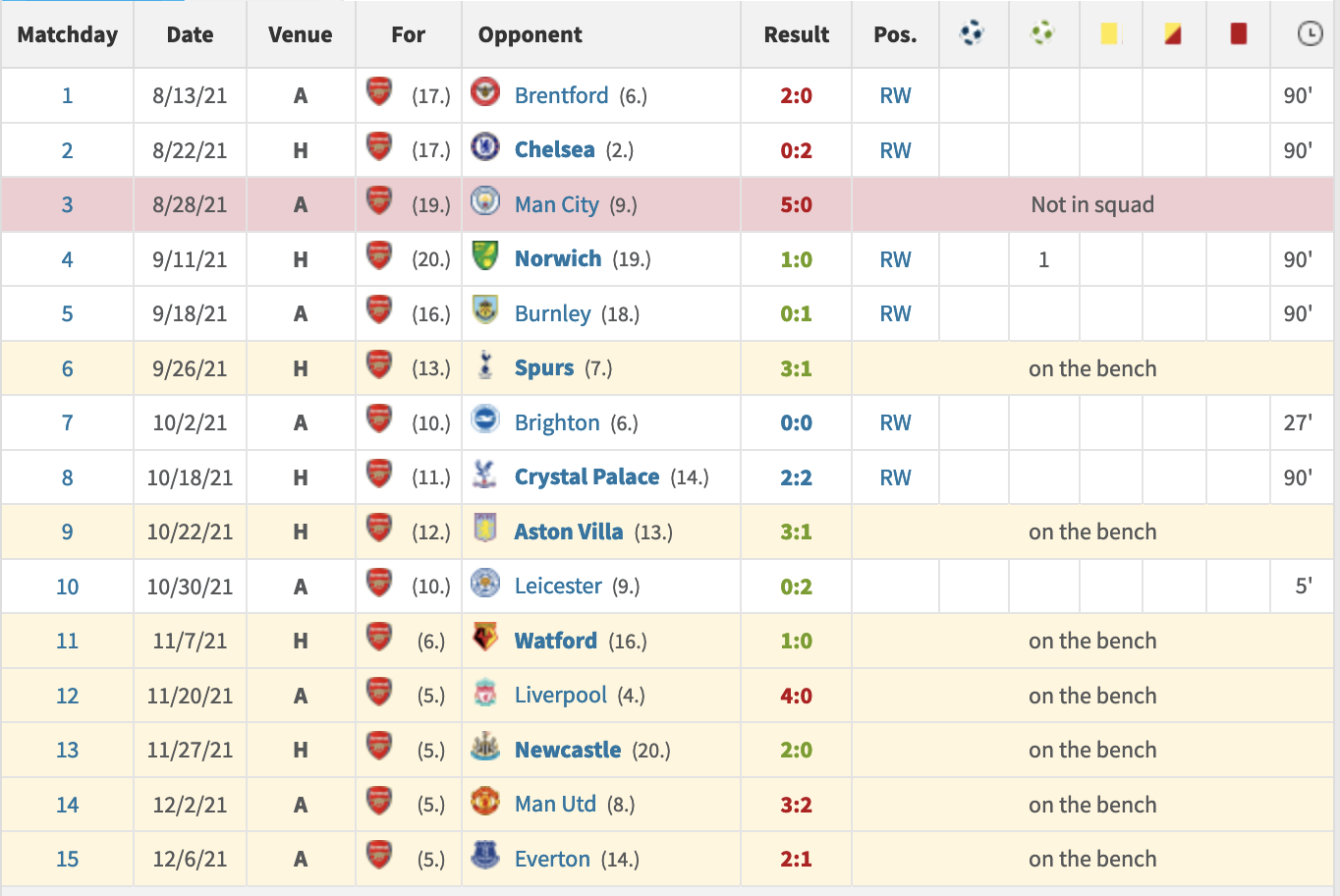 Now, he sits stony faced on the Arsenal bench as a want-away striker gets on in a game to play as a winger when he’s the most obvious replacement on the bench – aside from the club captain who himself was overlooked. I think it’s fair to say Pepe has been hit and miss in his Arsenal career, since that big money move in the summer of 2019. There’s been some good, some bad, and lot of mediocre stuff inbetween.

It’s also fair to say that Arteta has never been convinced. So much so that last summer, after Pepe had finished the 2019-20 season quite strongly he sanctioned a move for a washed-up, over the hill Chelsea mercenary who was out for a final pay day and a comfortable final few years in the Premier League. That worked out well, eh? Last season he finished the campaign pretty well, goals against West Brom, Palace and Brighton in the last few games bolstered his goal tally, but it felt like something to work with and perhaps to build on.

Now, he’s the latest to fall foul of the manager. Seemingly unusable in any circumstance. Not an option when you need a goal in a big game at Old Trafford or in a game against Everton when everyone watching knows you need another goal to make a 1-0 lead safe. He’s had 5 minutes of football in the last 630. Something is very wrong. It feels like you’re either in with Arteta, or very much out. Until you’re in again. At which point you must wonder how long it’s going to take to be out.

When we think about this current Arsenal team, the next obvious arrival is a striker. Everyone knows we’ve got to improve there. I don’t think there’s a single person who would argue with that. I’m not here to defend anyone’s form – and it’s absolutely reasonable to have concerns about Aubameyang (4 goals in 15 Premier League games); Lacazette (1 goal in 10 appearances this season); and Pepe because of his inconsistency – but these are the tools the manager has to work with right now. He might be unhappy with them, they may not be exactly what he’s looking for, but they’re what he’s got.

As it stands, we have issues with our three most senior attacking players. There might be a variety of reasons, but it doesn’t just feel like bad luck, does it? Then you can’t help but wonder is it really an issue of personnel as much as system. What use is a shiny new striker if you only make him one half chance per game? You might, if you’re lucky, find one of those rare forwards who are so good they make something out of nothing for themselves, but a) players of that quality aren’t going to play for this iteration of Arsenal and b) it’s not a sustainable way to construct that aspect of your team. An injury or a suspension and you’re derailed.

Coming back to Pepe, he wasn’t great when he did play this season, but then who was? He’s competing with Bukayo Saka for a place on the right, which obviously plays a part, but his complete lack of involvement is still a bit odd. Other senior players, like Aubameyang, Lacazette, and Thomas Partey haven’t delivered as much as we expected this season, but they play, so why is Pepe the one so ruthlessly frozen out? I’m not saying he should be starting every week, but his total exclusion and the manager’s refusal to address it in any meaningful way is a talking point.

In reality, I don’t think he’s got much of a future at Arsenal under Mikel Arteta, but in the present we still have football games to try and win, and using every bit of our squad to try and do that should be in the manager’s remit. Obviously he’s been found wanting in that regard in the last few weeks. Maybe there’s a chance for some Pepe redemption as he tries to fix it, because unless he does, and quickly, December could become far from festive.

For lots of chat on the Everton game, Arteta, our football, and lots more, the brand new Arsecast Extra is below. Enjoy.