Questions for the manager

A Mikel Arteta press conference takes place today ahead of our game against Southampton tomorrow. Far be it for me to make recommendations to good men and women of the press, but there are some obvious questions.

Why did Granit Xhaka play 90 minutes against Everton?

I don’t think he played particularly badly or anything like that, but after two months out with a very serious injury – one that was supposed to be keep him out until January – how on earth was he expected to play a full game at Premier League intensity? He had no training games, no run out for the U23s, just thrust back into action.

It was obvious he was knackered after about an hour, and while the Gabriel Martinelli change was unplanned, we made that scenario worse because we took off Kieran Tierney.

Obviously he lost his place to Nuno Tavares because of an injury, but in mid-November he played twice for Scotland and on both occasions basically played the full game. 90 minutes away to Moldova, 87 minutes at home to Denmark and there were highlights of him defending like a monster. It is, of course, quite possible he tweaked something in those games, but he was still on the bench for us when Nuno started.

If Xhaka can play 90 minutes (even though he couldn’t, but you know what I mean), why couldn’t Tierney? Why ‘waste’ a substitution – not least because as well as Xhaka you also started Alexandre Lacazette who is not a 90 minute player. If there were some ‘match fitness’ issues, why didn’t we give him any minutes in the last couple of weeks to get some of that into his legs?

I absolutely accept the fact that selection decisions are made by managers who have far more information about the physical state of players than we have, but then that’s why questions are useful because we can understand the decision making process better.

What is actually going on with Nicolas Pepe?

When he was asked about it the other night, he ignored the question and spoke about Eddie Nketiah and how well he’s training. It was an obvious deflection, and while I don’t expect Arteta, or any manager really, to go into the nuts and bolts of every decision he makes and why, when you have a £72m club record signing sitting on the bench being overlooked for a young striker who has rejected a contract offer and will leave on a free, it’s a talking point.

I did write about this the other day, and it’s not that I’m Pepe’s biggest fan and demanding to see him back, but you can’t ignore that this is a story. It would be the same at any other club if their record signing wasn’t getting any playing time and looked to be frozen out. Another thing to consider around this is that the French speaking trio of Pepe, Lacazette and Pierre-Emerick Aubameyang are pretty tight, and given their seniority if they get disgruntled, it might have an impact.

I wonder how Aubameyang feels about the Nketiah sub. Again, this isn’t to defend him or his form which has been poor, but even if your point of view is ‘It’s up to him to do better’ let’s not pretend that decisions like this don’t affect players. If you’re the captain of a football club and you see a young player come on ahead of you, one without any real track record of goalscoring in the Premier League either, your pride could be wounded.

If Aubameyang bounces back and scores goals, then you can say it’s a smart piece of management, but it could go the other way too, and that’s not what you want. It feels a bit high stakes for no good reason. It’s not as if we gave the minutes to an up and coming striker who is chomping at the bit to be part of our future.

Why can’t we score more goals?

The $64 thousand million billion dollar question. Look at these stats from Opta (via @Orbinho): 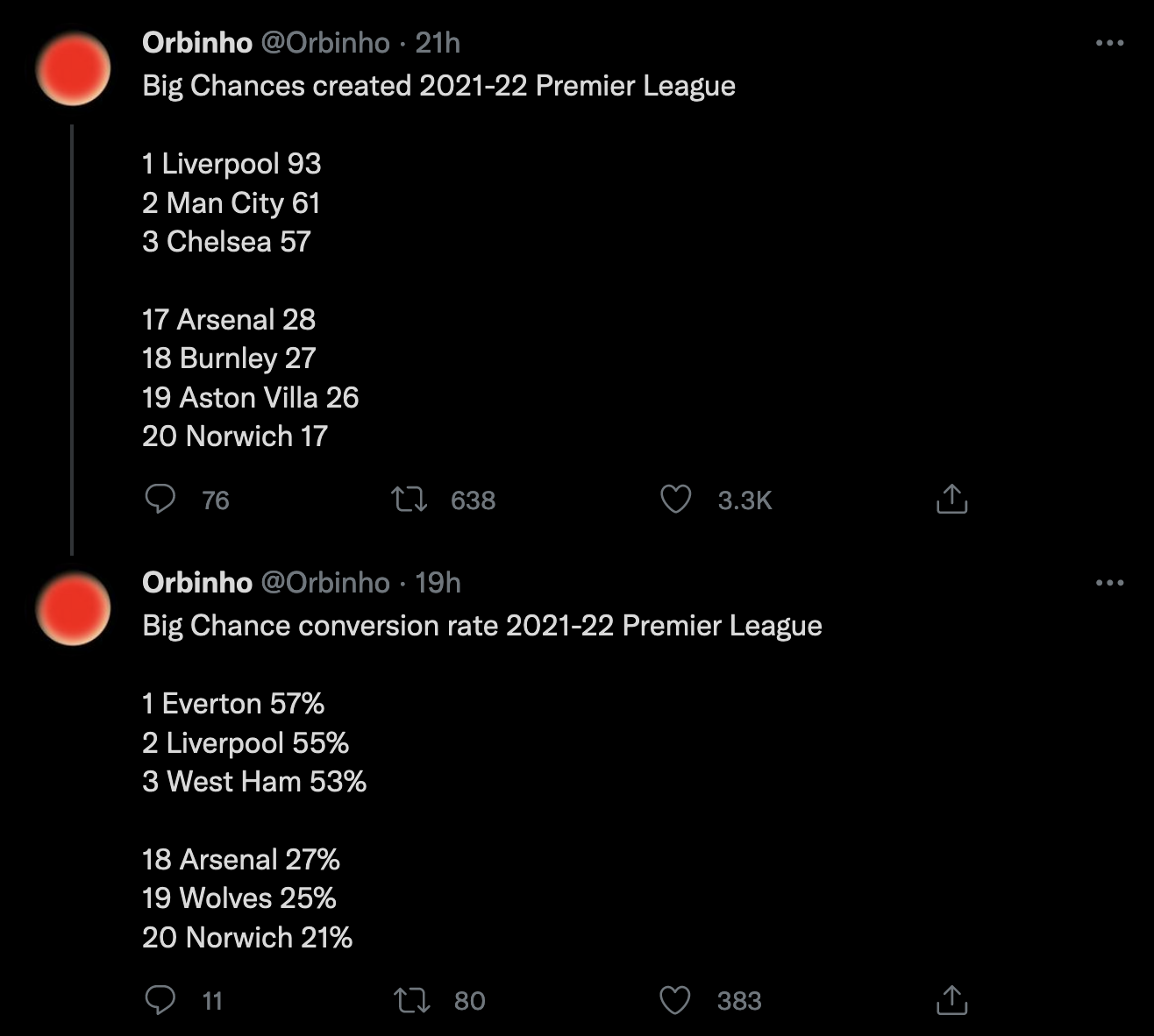 Here’s a quote from Mikel Arteta:

“To become a top top team you have to score 90 or 100 goals to be competing with the top guns and it’s a challenge for us and an area that we have to improve and do better.”

So, what is he going to do about it? I can’t believe for one second it’s not an issue he’s unaware of and hasn’t tried to address, but it’s been a consistent problem since he took over nearly two years ago. By his own admission, you have to score a lot of goals to become a top team. Right now, we’re on target for a 46 goal season. Unless we produce a lot of 1-0s, that’s not going to get us anywhere close to where we want to be in terms of final league position, or how we view the progress of this team.

Our list of Premier League goalscorers and their tallies this season doesn’t inspire a great deal of confidence:

It’s like being a boxer who doesn’t really punch. You might be able to stay out of the way long enough not to avoid getting knocked out, but you’re not going to win many points from the judges. I’d love to hear him expand on this, because it’s so, so important.

Right, let’s leave it there for now. There was plenty to chat about on the new Arsecast with Andrew Allen and Clive Palmer. All the links you need to listen/subscribe are below. Enjoy.

Previous articleEpisode 657 – Slugs in the garden
Next articleHow soon is now?