“When you play 60 metres away from your goal then the controlling the counter-attack is important,” Pep Guardiola told Sky Sports last season as Manchester City strolled to the Premier League title.

Controlling the counter-attack has become one of the keys to the modern game. The vast majority of top teams dominate possession and spend most of their time in the opposition half, which obviously leaves a lot of space to break into when they do lose the ball. So how do you control that space to kill counter-attacks?

This was one of the first big questions for Mikel Arteta when he arrived at Arsenal.

“We had a problem transition-wise so they got shots on target and chances just from the transition of an eight-yard sprint, which we need to stop,” interim boss Freddie Ljungberg said in December 2019 after his first game in charge, a draw at Norwich. It’s something Arteta sought to change immediately and the same principles guided the win over Watford in his 100th game in the Arsenal dugout.

Central to the win and that particular aspect of the performance was Ainsley Maitland-Niles. Awarded Man of the Match by Sky, Maitland-Niles was characteristically calm on the ball, covered Nuno Tavares well on the left but changed up his positioning in build-up often enough to remain unpredictable, dropping narrow or pushing higher depending on where Tavares and Emile Smith Rowe moved, and looked solid overall.

But where the 24-year-old really made a difference was in the seconds after Arsenal lost the ball in the Watford half. He kept Arsenal on top and negated Watford’s most dangerous player in one.

It was evident as early as the Bukayo Saka goal that was chalked off for offside. With arsenal losing the ball, Watford look to play out, but Maitland-Niles wasn’t prepared to allow Isamila Sarr any time as the pass came into his feet. 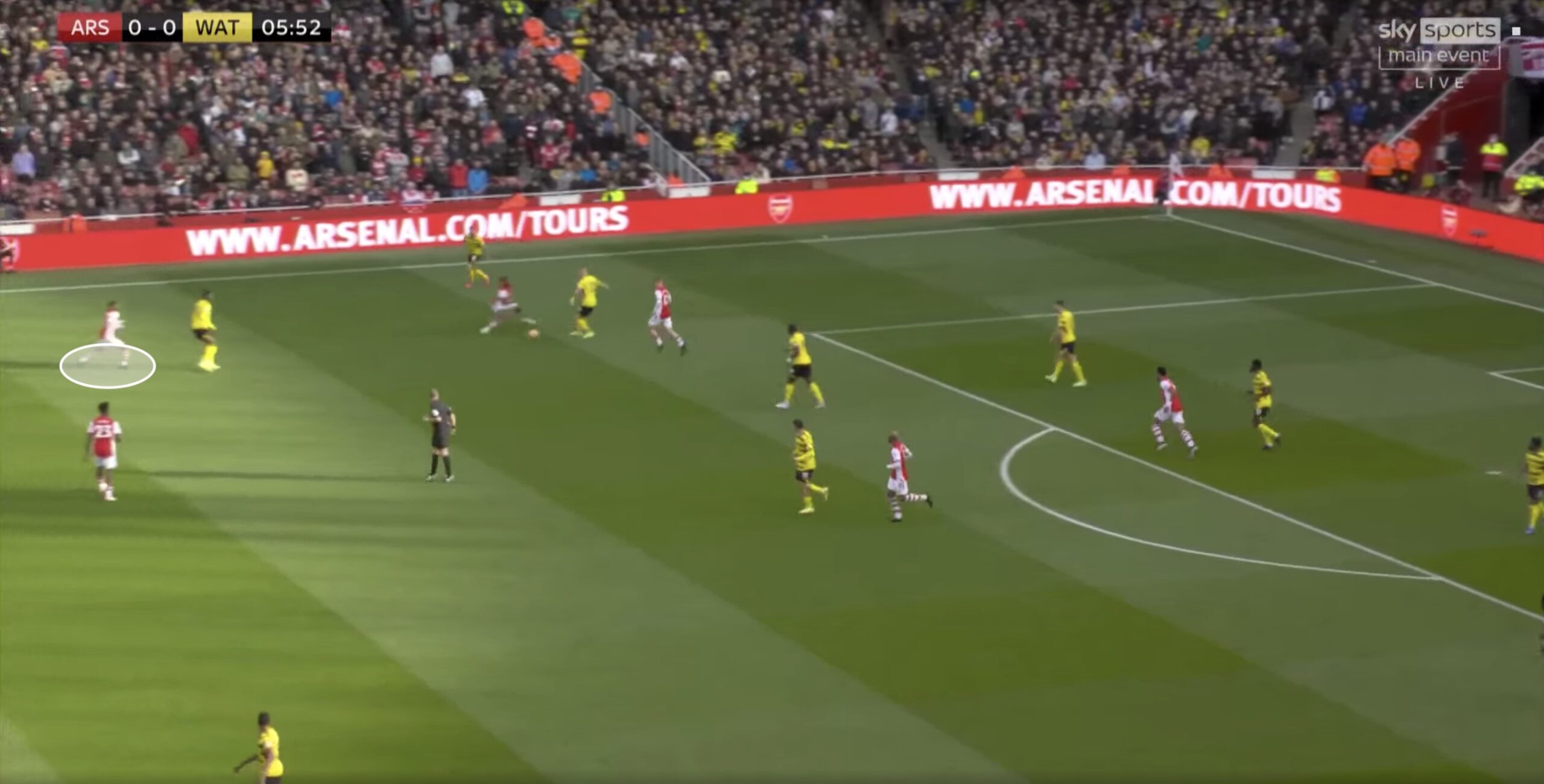 And the Arsenal man won possession before jinking away and finding Alexandre Lacazette in the box. 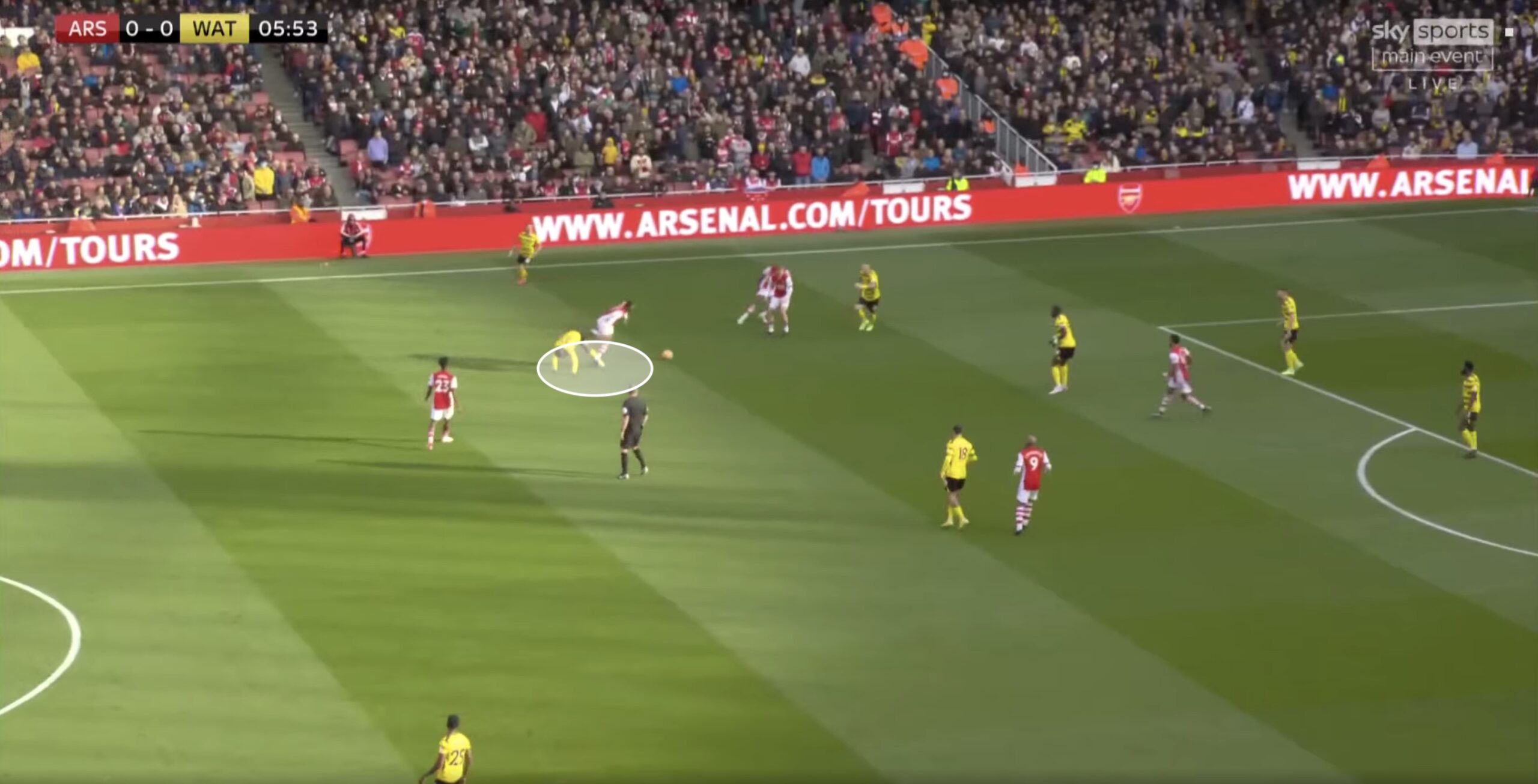 There was more of this to come. Arsenal have had issues with maintaining periods of pressure throughout Arteta’s reign but this wasn’t the case on Sunday. As Watford regained possession deep in their own half and looked to move forward, Maitland-Niles was there to rush them into errors. 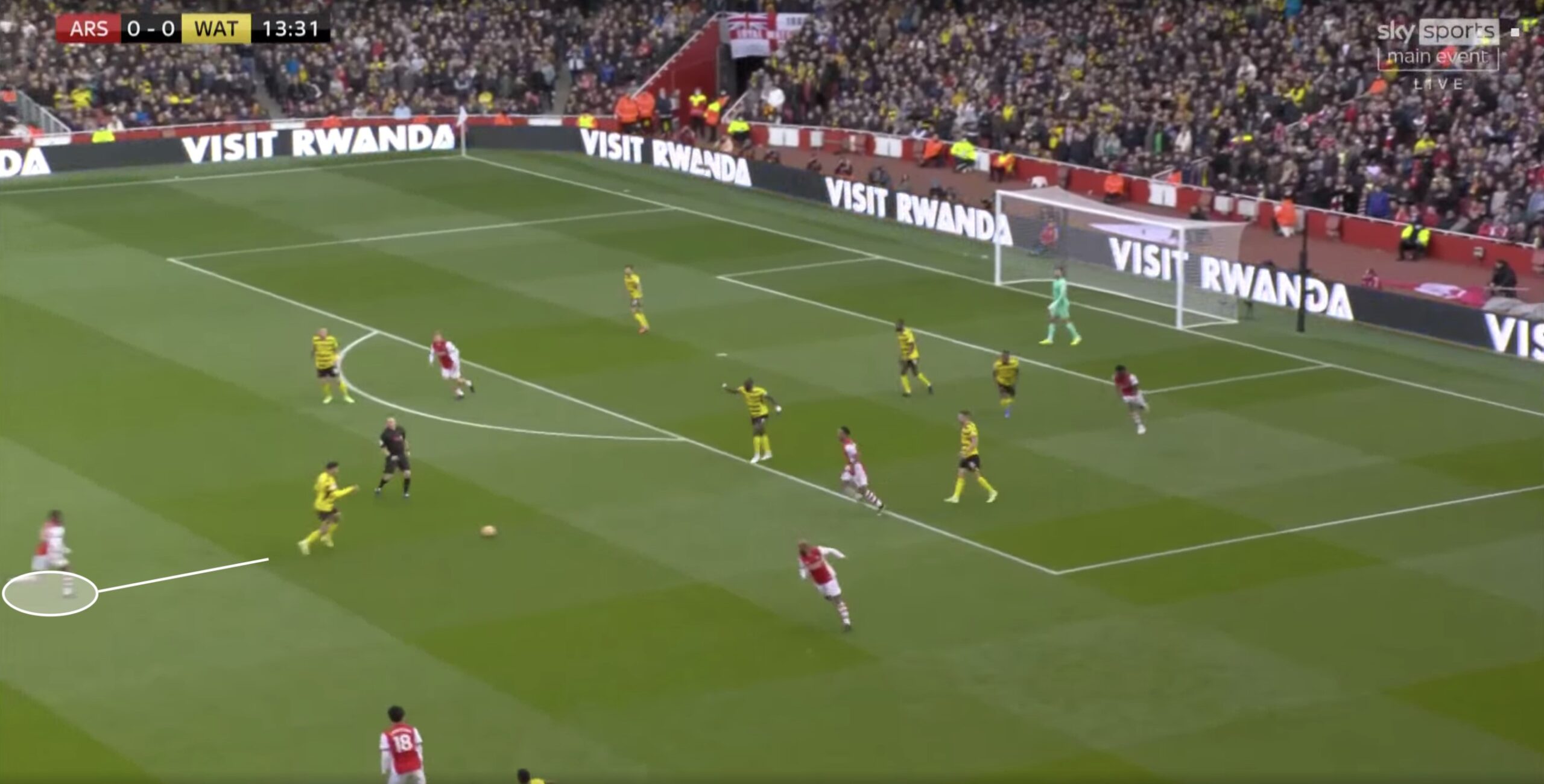 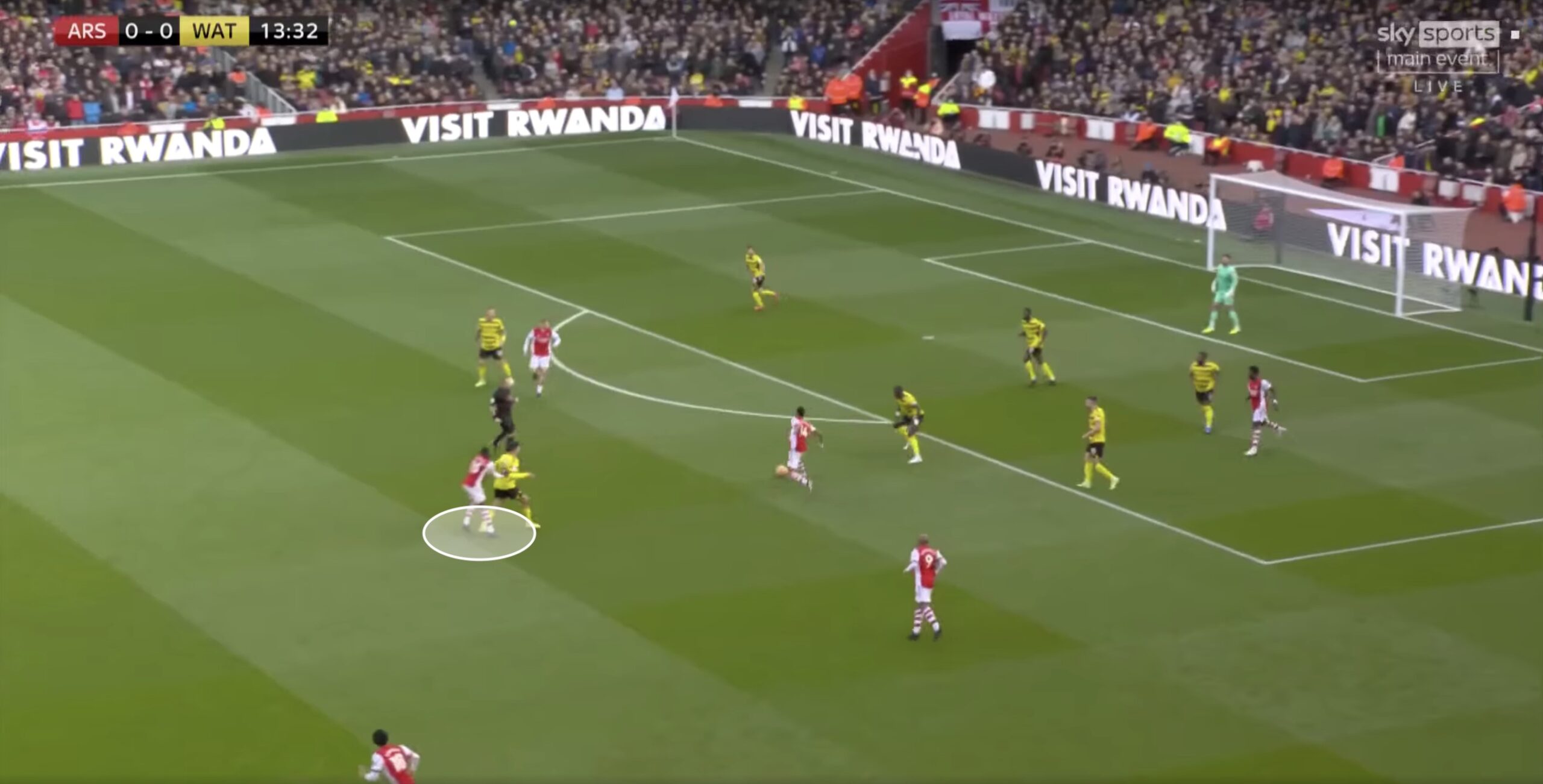 The great thing about his first half performance in particular was how he has the legs and awareness to quickly make up for situations that saw Watford have a little more success. Here he looks to press Moussa Sissoko but the ball is quickly played into Juraj Kucka instead. 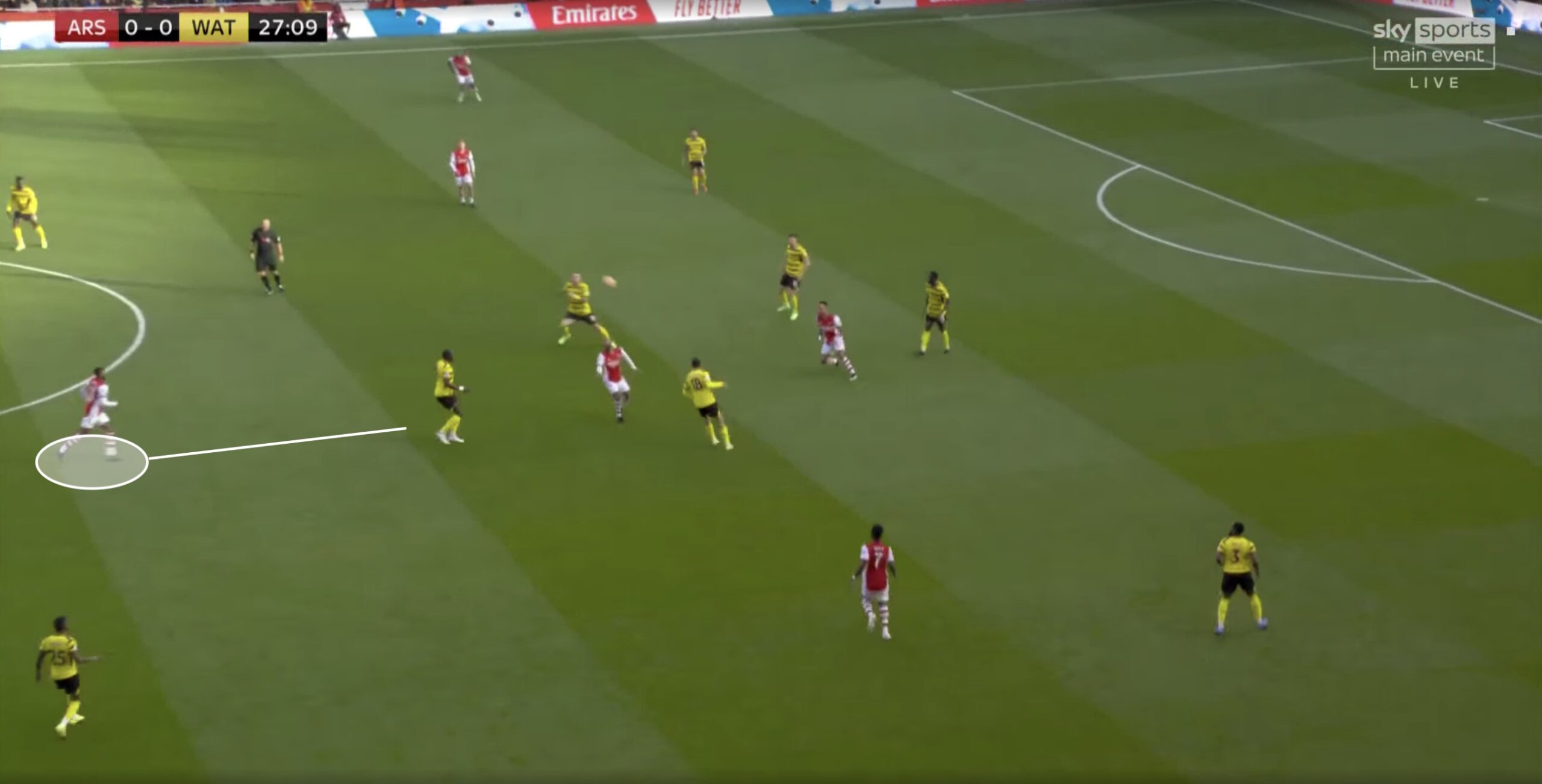 Having moved to close Sissoko down, Maitland Niles is quick to turn and run with Kucka as he drives with the ball.

And there was a similar case shortly before half-time, when Watford broke through some counter-pressure from Alexandre Lacazette and Emile Smith Rowe but met their match in Maitland-Niles, sweeping up in front of the backline. 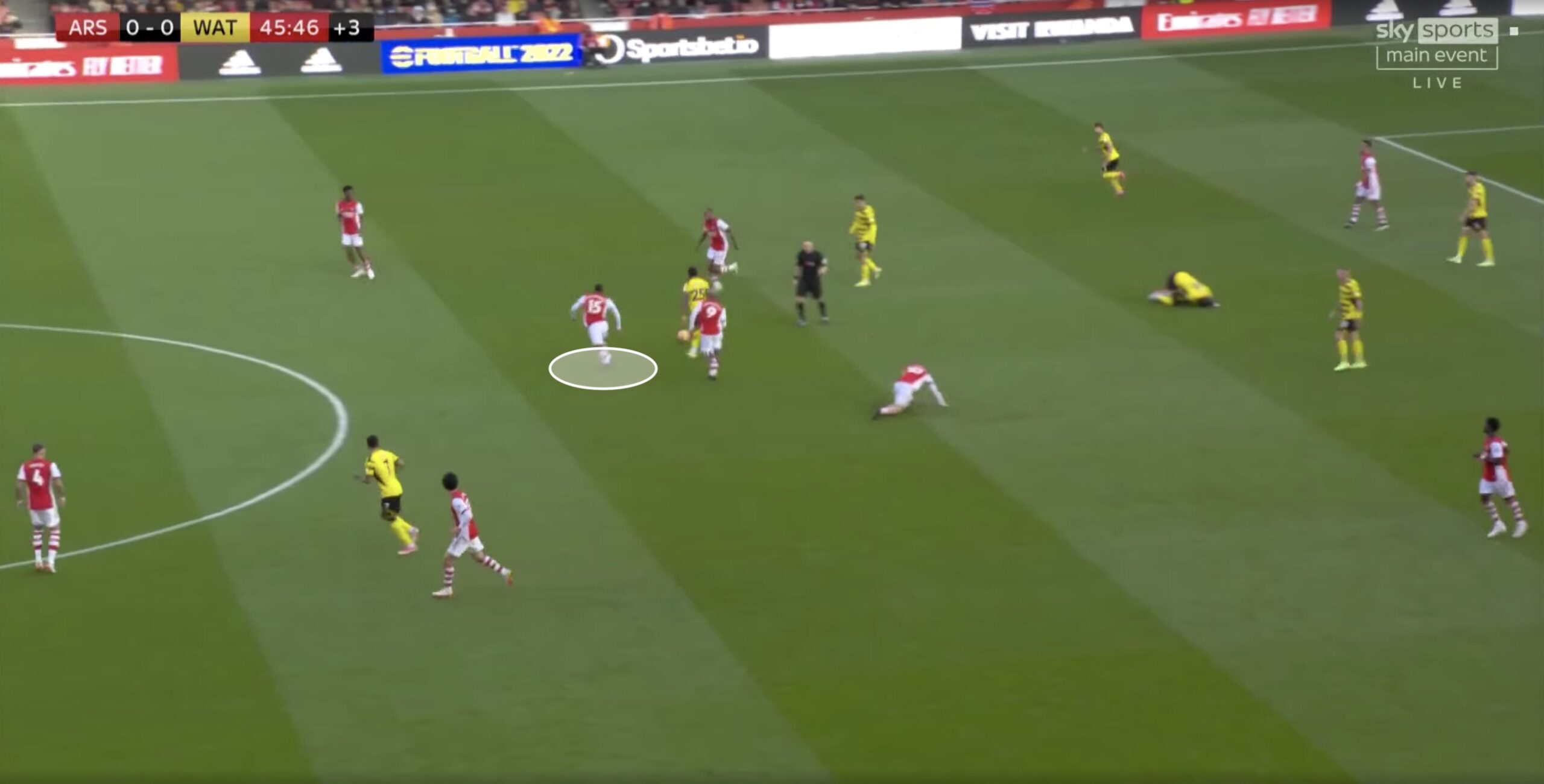 The pressure immediately after losing the ball, and a particular focus on stopping Sarr, was even more apparent after the break.

Whenever Arsenal broke into the Watford area on the attack, Maitland-Niles was prepared for the team to lose the ball. He essentially man-marked Sarr, Watford’s most threatening attacking player and the man most likely to cause damage on the break, when his Arsenal team-mates had the ball out wide. 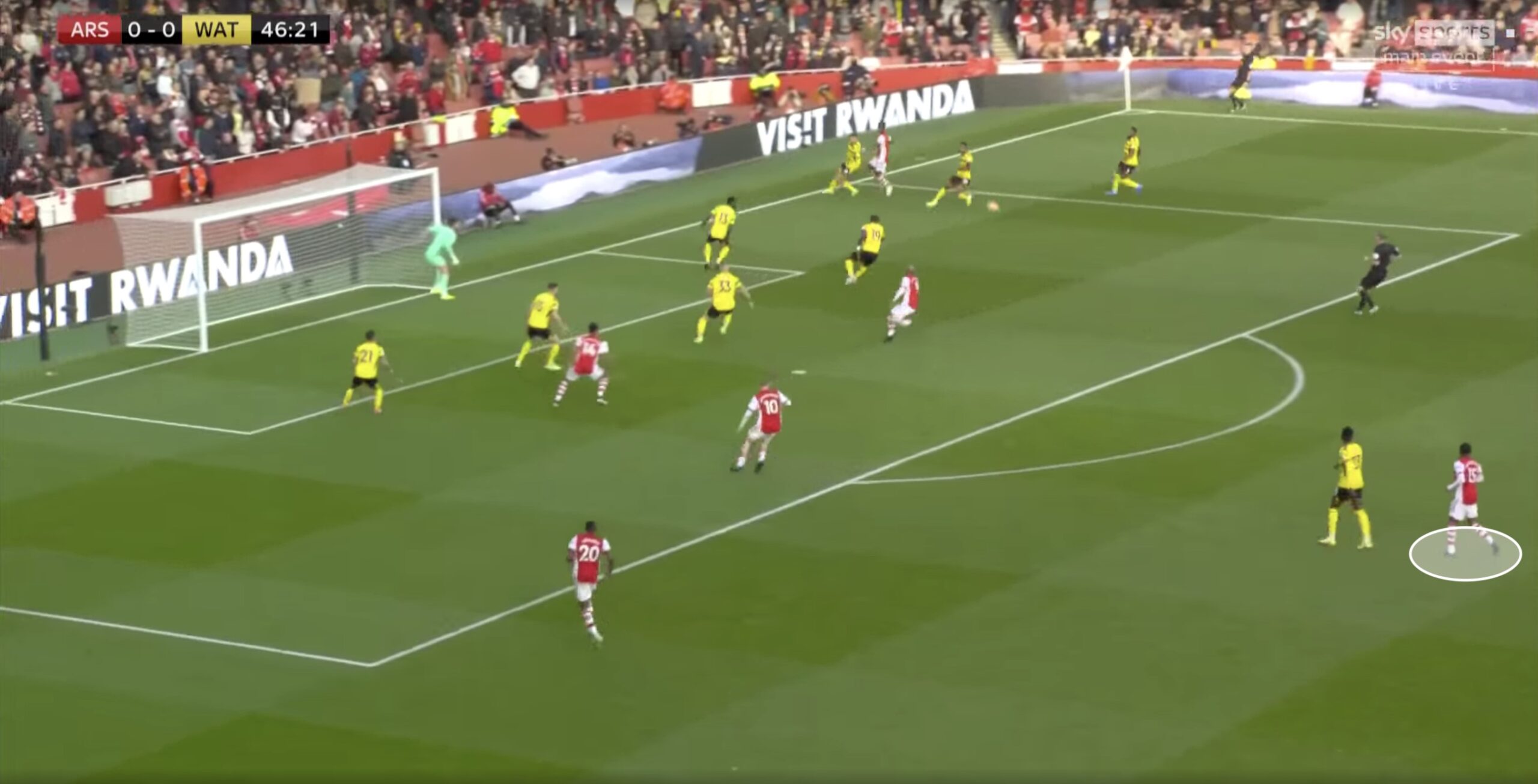 And if and when Josh King dropped back, he was followed by Ben White. 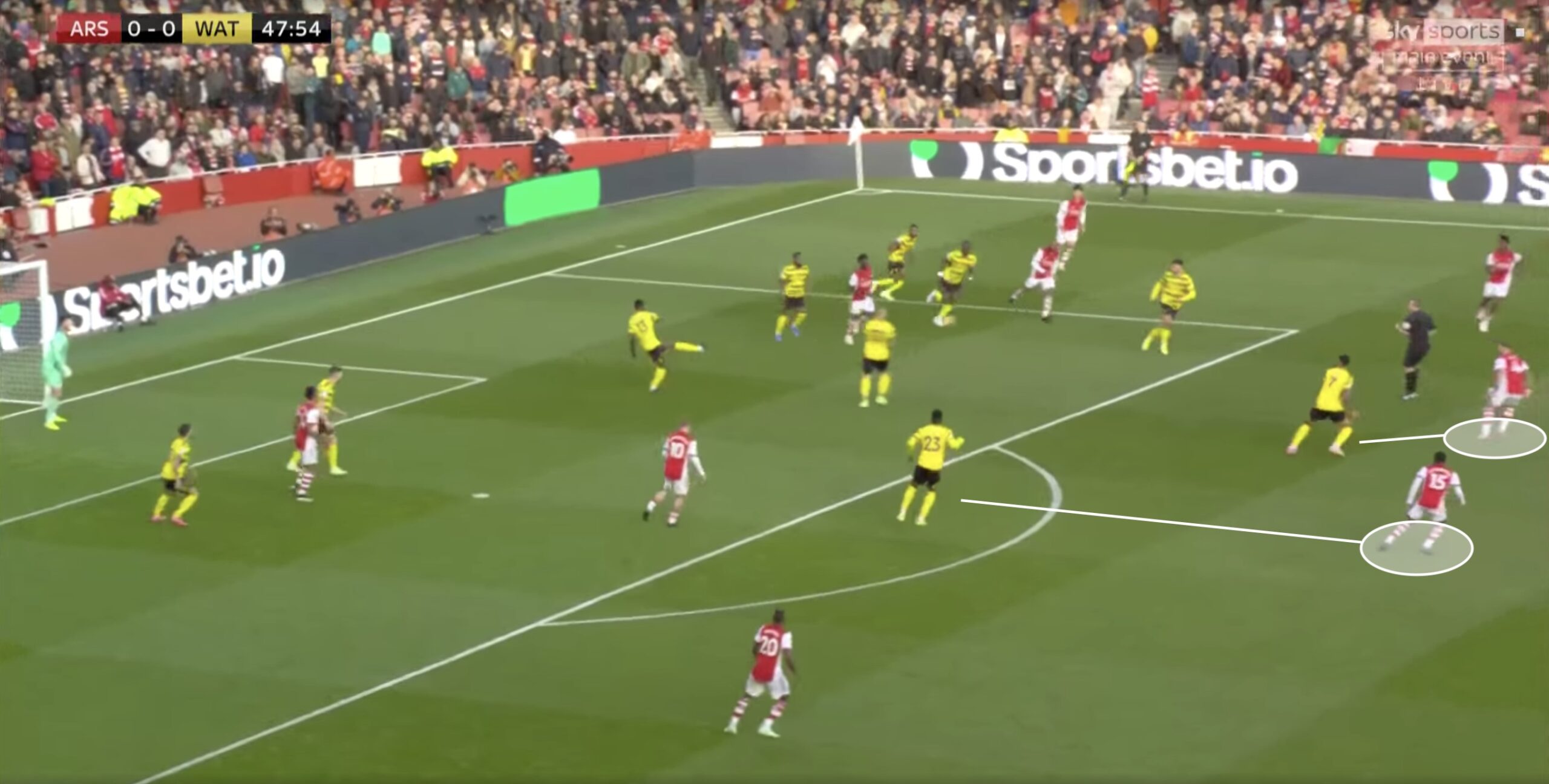 So it really should have been no surprise that this high-pressure man-marking in advance of losing the ball led to the breakthrough.

With the ball out wide, there would be a temptation for a midfielder to get into the area, but Maitland-Niles is happy to hang back in case the ball breaks for Sarr. 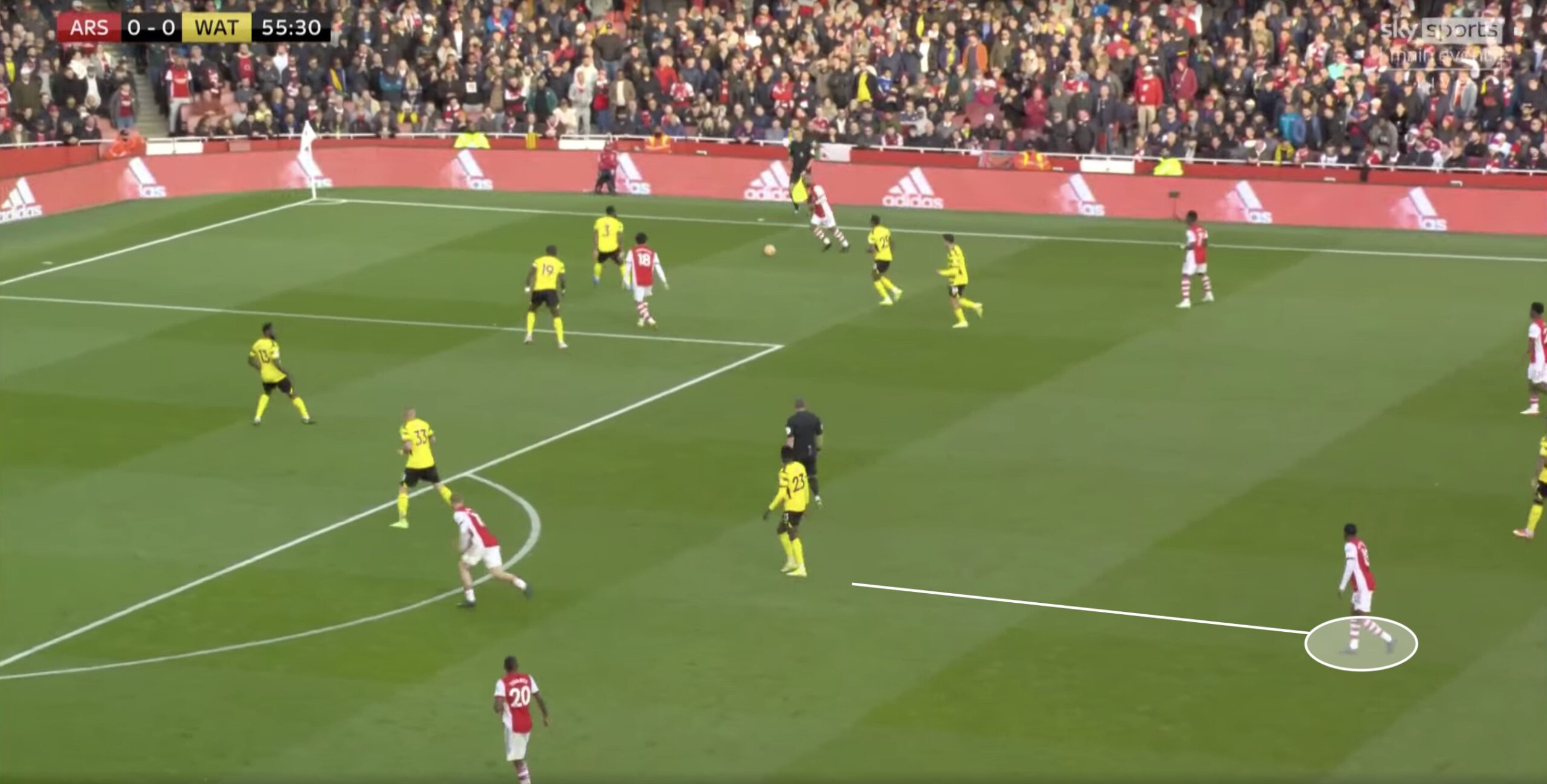 It does, and he is rushed into a backwards pass. Watford are under pressure near their own goal and Arsenal are marking all their out balls. The pass back into the area leads to a pass into Josh King, again closely tracked by Ben White, who jumps in to steal possession and begin another wave of attack. 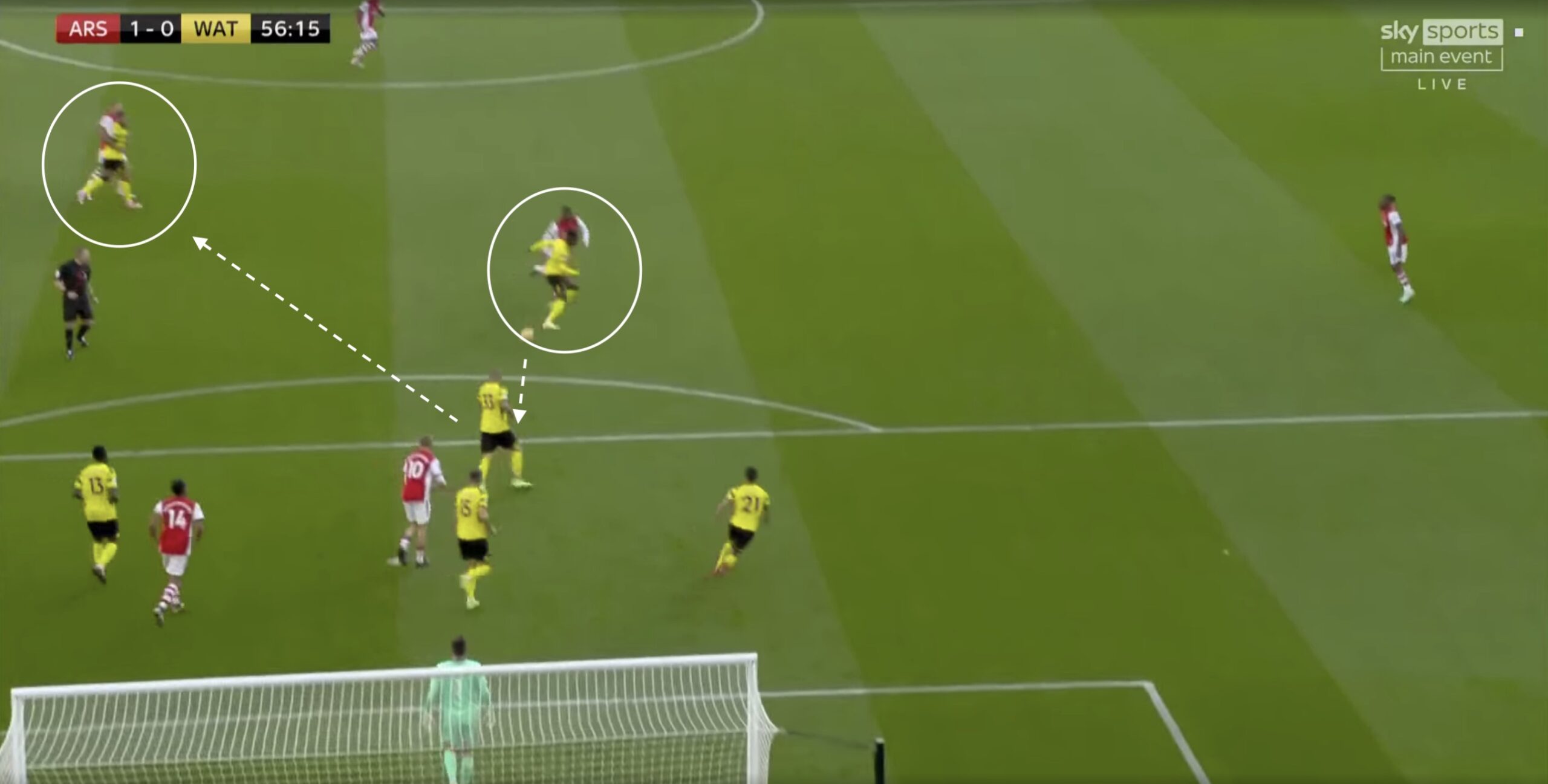 This particular aspect of Maitland-Niles’ game didn’t just help Arsenal offensively but defensively. That’s the secret of effective counter-pressing, which allows you to win the ball high upfield to keep the pressure on but also makes it harder for the opposition to escape and get anywhere near your goal.

Nothing was more central to Sunday’s clean sheet than Sarr’s inability to get involved. He had fewer touches than in any other game this season and nobody has restricted him to less final third touches, with Arsenal and Liverpool both keeping him to 14. He also carried the ball just 102 metres, the least in any Premier League game this season, and completed just five passes, the same season low he was kept to by Liverpool and Leeds.

After a string of early leads, one question heading into the weekend was how Arsenal would respond if there wasn’t an early goal this time around, or whenever that might happen next, and could this team keep the pressure on for a longer period? We did get an early goal, though it was disallowed, and the emphatic answer was clear when the legal opener was scored in similar fashion. The team didn’t panic, the plan didn’t change.

That was the first new test in a while and Arsenal passed it, with Maitland-Niles playing a starring role.

Previous articleArsecast Extra Episode 441 – 08.11.2021
Next articleLooking for the edge