The Mikel Arteta era is underway and he recorded his first win as Arsenal boss with a 2-0 win against Manchester United on Wednesday evening. Happy New Year!

After 18 months of Unai Emery and a few weeks of Freddie Ljungberg, the team is once again under new management, with new ideas, new instructions, and new patterns to get used to.

Showings against Bournemouth and Chelsea were positive but the results weren’t. On Wednesday, the team delivered both. Rather than go through the game like other match-focused tactics columns here on Arseblog, I thought I would try to break down the new Arsenal with a few questions about what Arteta had his team doing differently in his first win.

How do Arsenal build up in possession?

Patiently, calmly, and from the back. Arsenal’s build up play under Emery was also often very patient but it felt aimless more often than not, with the team regularly pressed into mistakes. The early days under Arteta thus far are much more encouraging, with players always given options on the ball.

The Arsenal team in Arteta’s early days can be roughly split into a back five and a front five in possession. On the left, Sead Kolasinac (or, previously, Bukayo Saka) will generally exclude themselves from the build up, providing width and an option on the flank, and bringing the opposition right-midfielder with them to relieve pressure on Granit Xhaka, who frequently drifts to the left of David Luiz. On the opposite flank, Ainsley Maitland-Niles has the option to either stay wide, stretching the opposition across the pitch and opening passing lanes, or move centrally, to outnumber the opposition and play through them. 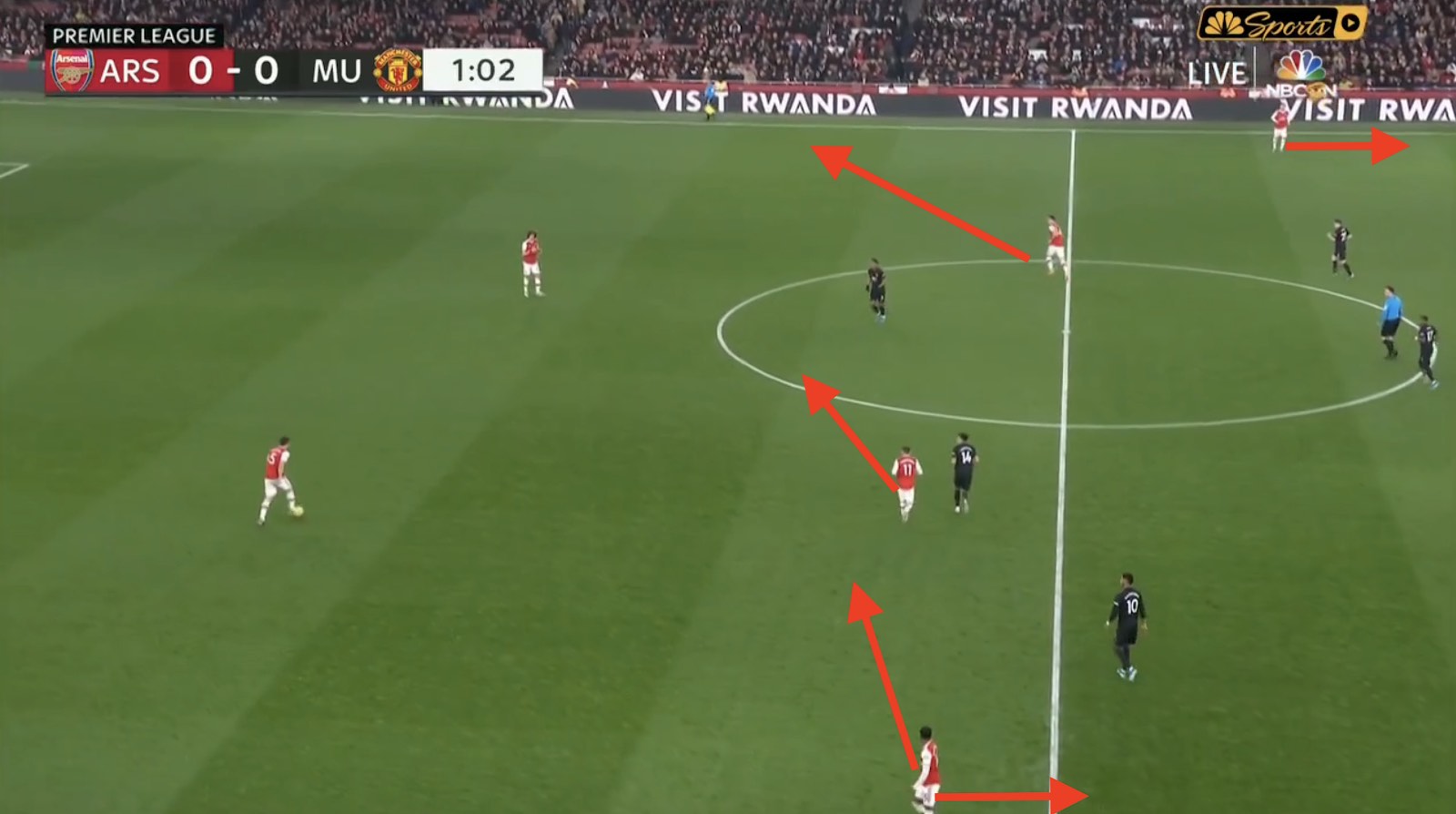 Xhaka sometimes keeps his central position too, offering David Luiz in particular a more direct pass into midfield. The most important thing, though, is that the opposition becomes stretched and the man in possession has options.

Both Luiz and Xhaka have impressed as their abilities on the ball are used to break lines. With Arsenal stretching opponents across the pitch and making deep runs with the likes of Kolasinac and Aubameyang, the Gunners have immediately bought themselves more time on the ball. With Luiz and Xhaka both playing to the left, the ball is often circulated on the right, attracting the opposition across the pitch before quickly switching it. Throughout Wednesday’s first half, Maitland-Niles would calmly keep possession, threatening to dribble before turning back and releasing David Luiz with time and space to play out. 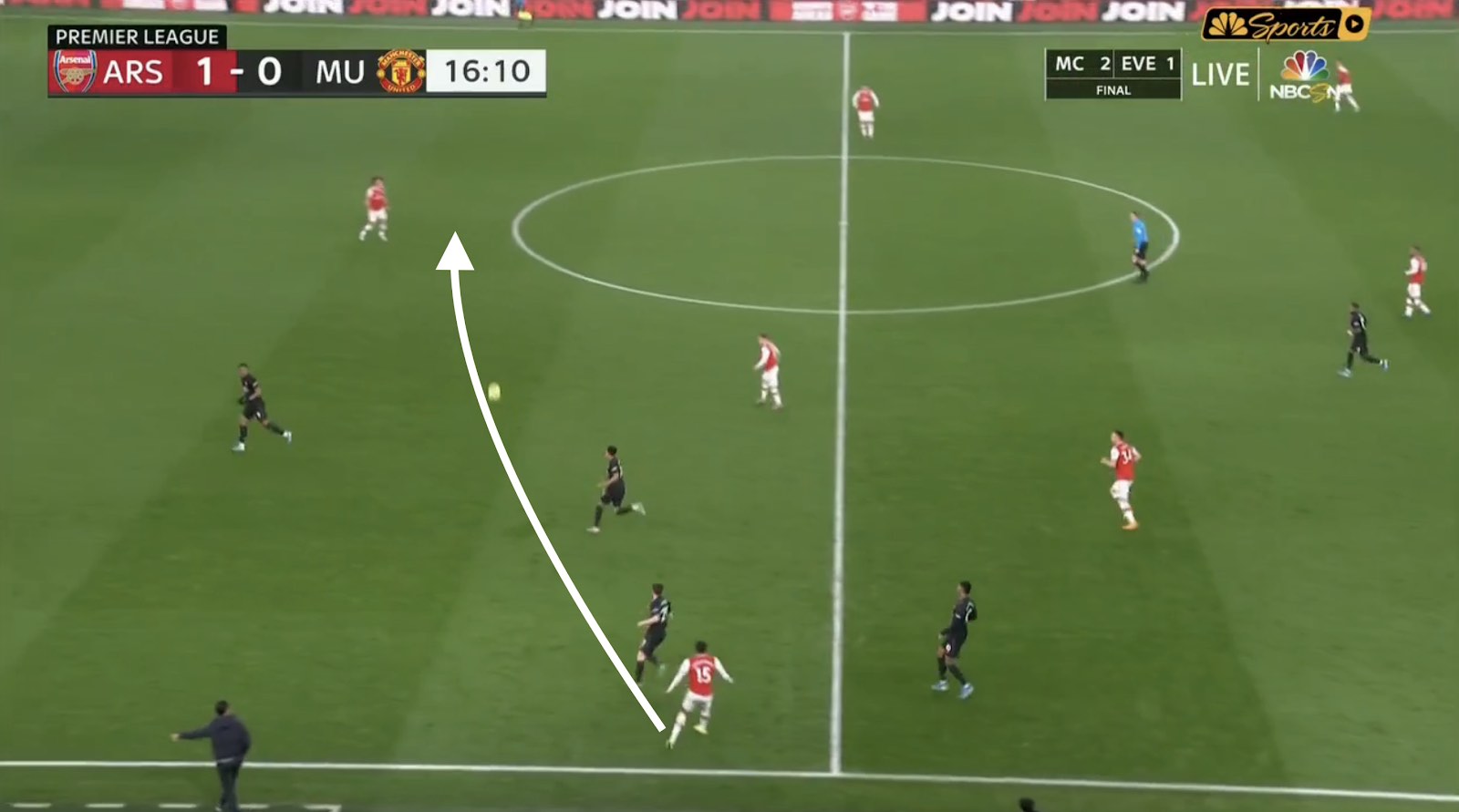 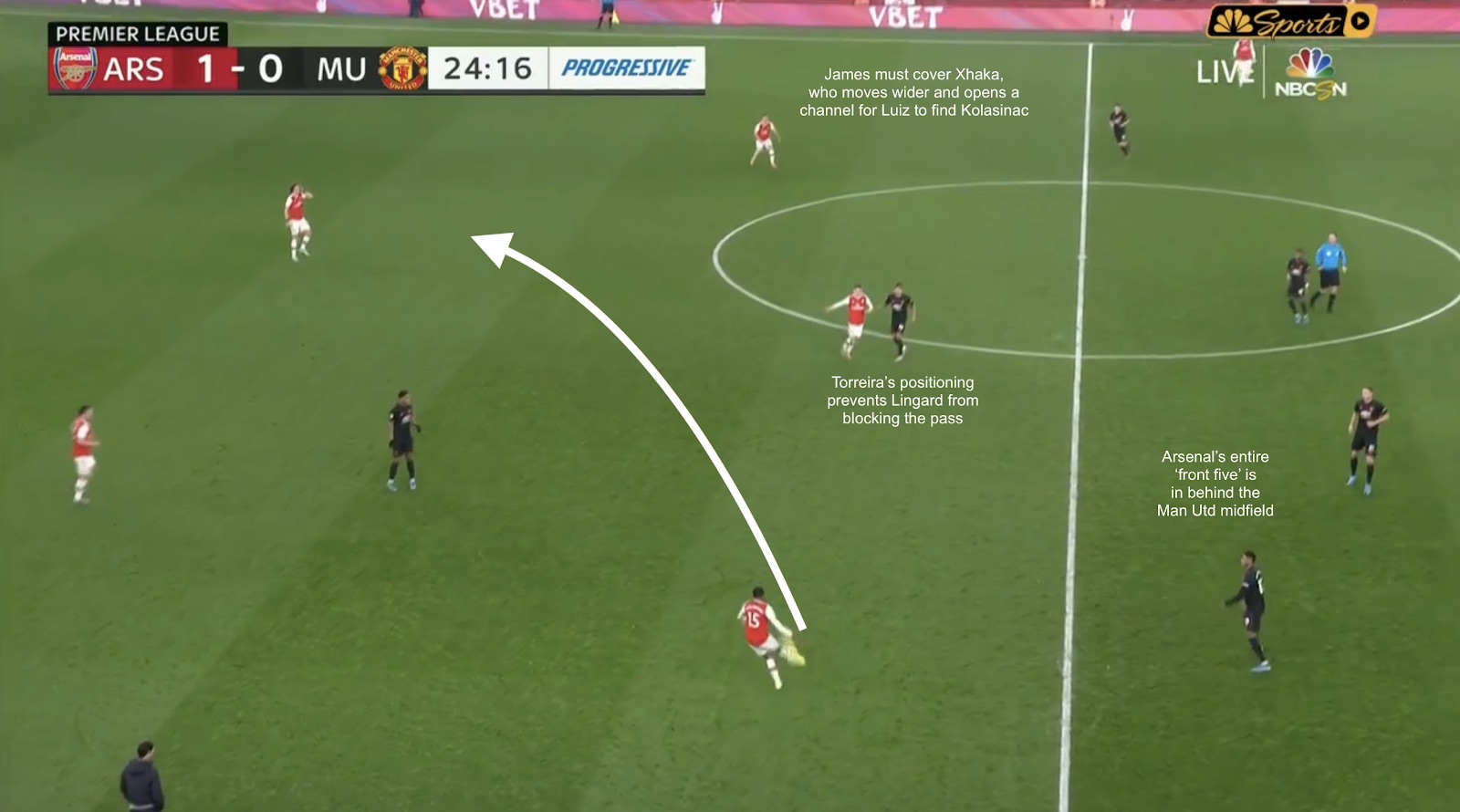 How do Arsenal manipulate the opposition in possession?

The above example already demonstrates how Arsenal’s spacing across the pitch creates more options, more openings, and more time for our players to play out from the back but there is also valuable work being done from the ‘front five’ to create space.

The 5-5 split is clear to see from this first half free-kick, as are some common features of Arsenal’s play. First of all, the entire width of the pitch is utilised, with Kolasinac on the left and Pepe on the right. Lacazette drops off of the centre-backs and Aubameyang darts into the centre of the pitch, bringing Aaron Wan-Bissaka with him and leaving Kolasinac with the entire wing to himself. 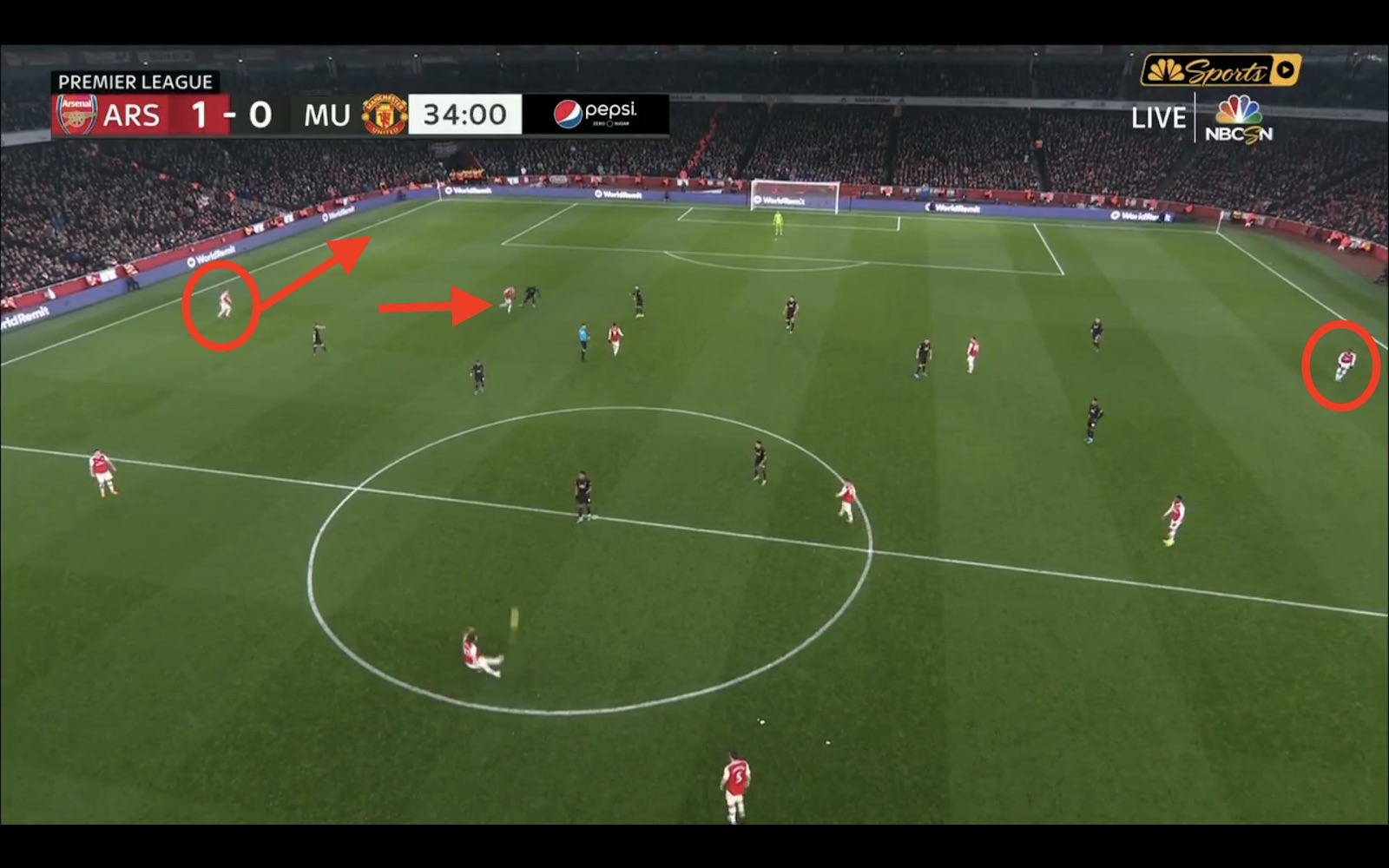 Lacazette would often drop deep to either hold the ball up and or drag one of United’s centre-backs into midfield, creating space for Aubameyang to move into. As he did, Kolasinac would be freed up and have space to drive into.

Such is the rehearsed nature of the plan (James McNicholas writes in The Athletic that Arsenal practice such moves in the warm up), players would often direct team-mates when they thought the time was right to play the pass – like Lacazette here, deeper signalling to Xhaka to feed the open Kolasinac on the touchline after Aubameyang has made his customary movement inside. With Aubameyang tying up Wan-Bissaka and moving centrally, Kolasinac has time and the centre-backs are left questioning whether they can afford to follow Lacazette into midfield. 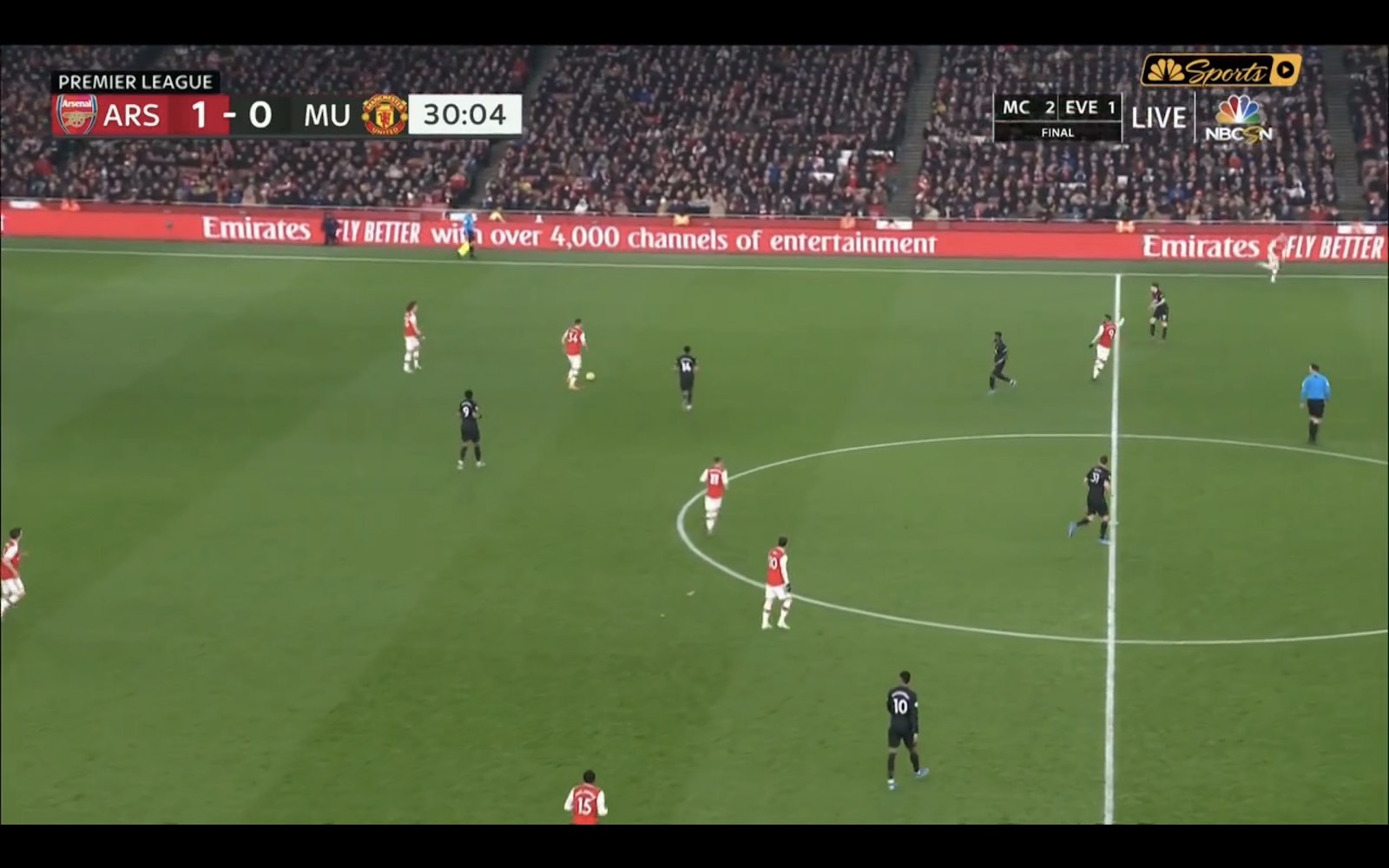 This happened for the opening goal, where Aubameyang moved inside, then back outside to receive the ball behind Wan-Bissaka and pull Lindelof out of the middle.

By the time Kolasinac moved inside the Arsenal captain and received the ball again, the Gunners had three players (the remaining three of that ‘front five’ all in the middle of the box waiting for a delivery. It was, of course, Nicolas Pepe who received the ball and he found himself in plenty of space, in part thanks to the width he held even when the ball was on the other side of the pitch. 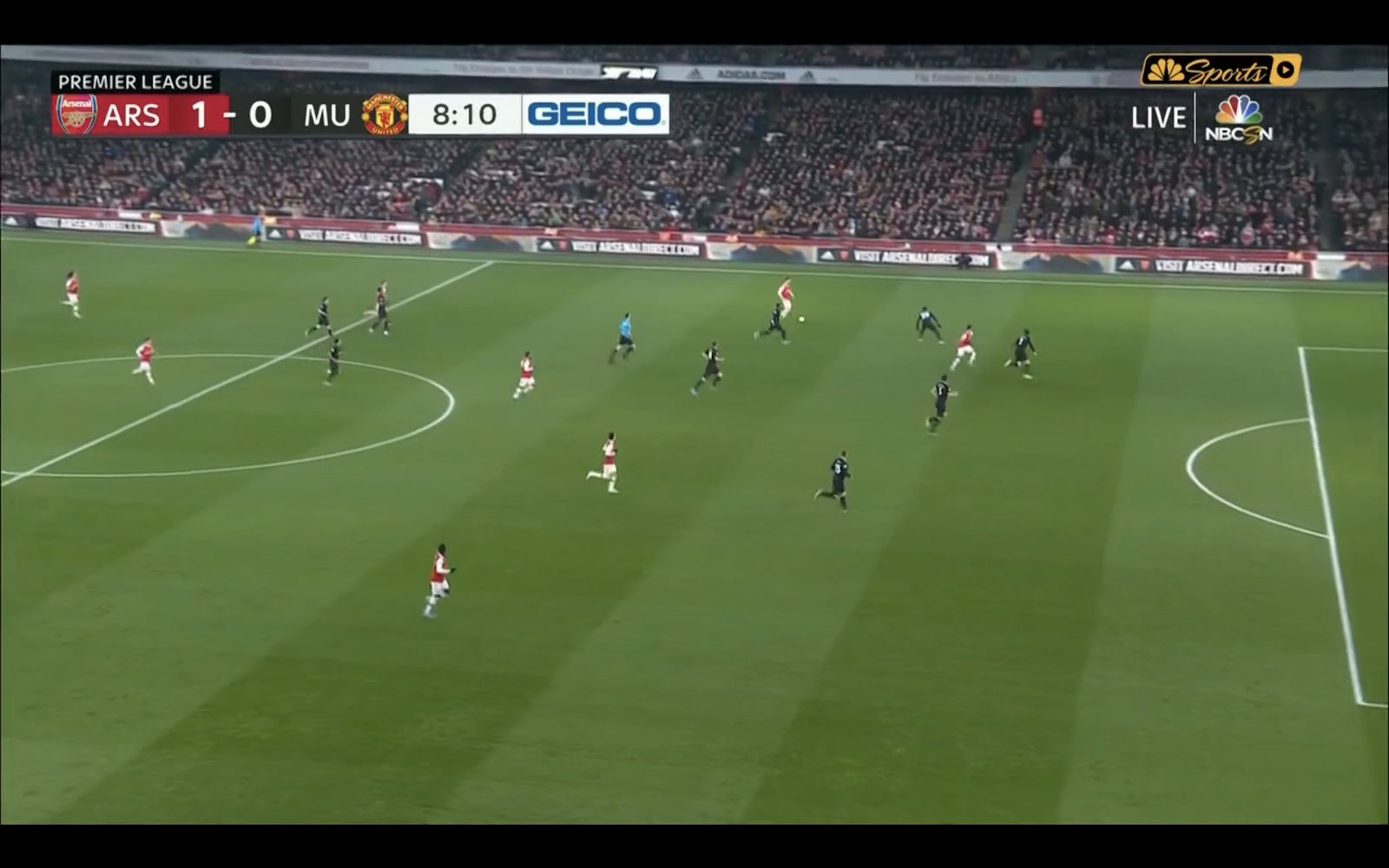 This was reminiscent of Thierry Henry speaking about playing for Pep Guardiola’s Barcelona.

“He used to say: ‘My job is to bring you to the last third; your job is to finish it’. The last third was freedom for us. But if you don’t do what he is asking you to do, you’re going to be in trouble. When Pep has a plan, respect his plan.”

It’s unlikely to be a coincidence that Arsenal are doing this already and Arteta spent almost three-and-a-half years working alongside the former Barcelona boss at Manchester City.

When do Arsenal press?

It felt like Wednesday’s game could be easily split into two halves. In the first, Arsenal pressed high. In the second, they were tired and sat in. In truth, the first half also showed a bit more of that discipline than I first remembered.

On the rare occasions that United held possession outside of their own third, Arsenal would generally sit back in something like a compact 4-4-1-1/4-4-2 shape, with Ozil and Lacazette the first line of defence. 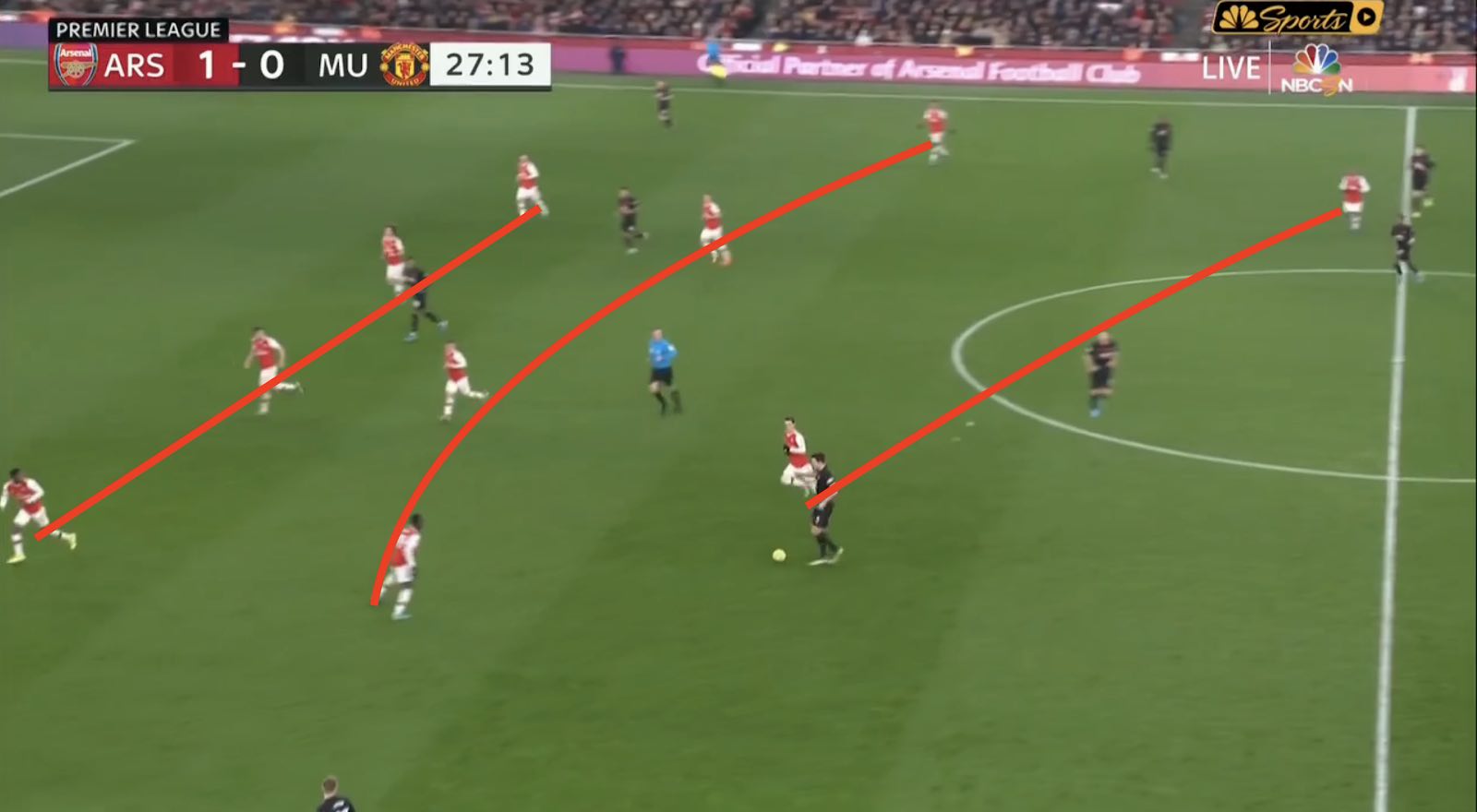 There were two crucial elements to the defensive effort. Firstly, the gaps between the lines were minimal, forcing United to move the ball out wide, or attempt risky passes or dribbles.

Secondly, Arsenal showed huge desire not to let any player rest on the ball. When the ball was moved into midfield, Xhaka or Torreira shut their man down before he had time to turn, often forcing the ball back. Maitland-Niles and Kolasinac did the same on the flanks.

When the ball did move backwards or sideways across the defence, Arsenal launched their press. See Aubameyang here, going through the gears as he anticipates a flat sideways pass from Maguire. 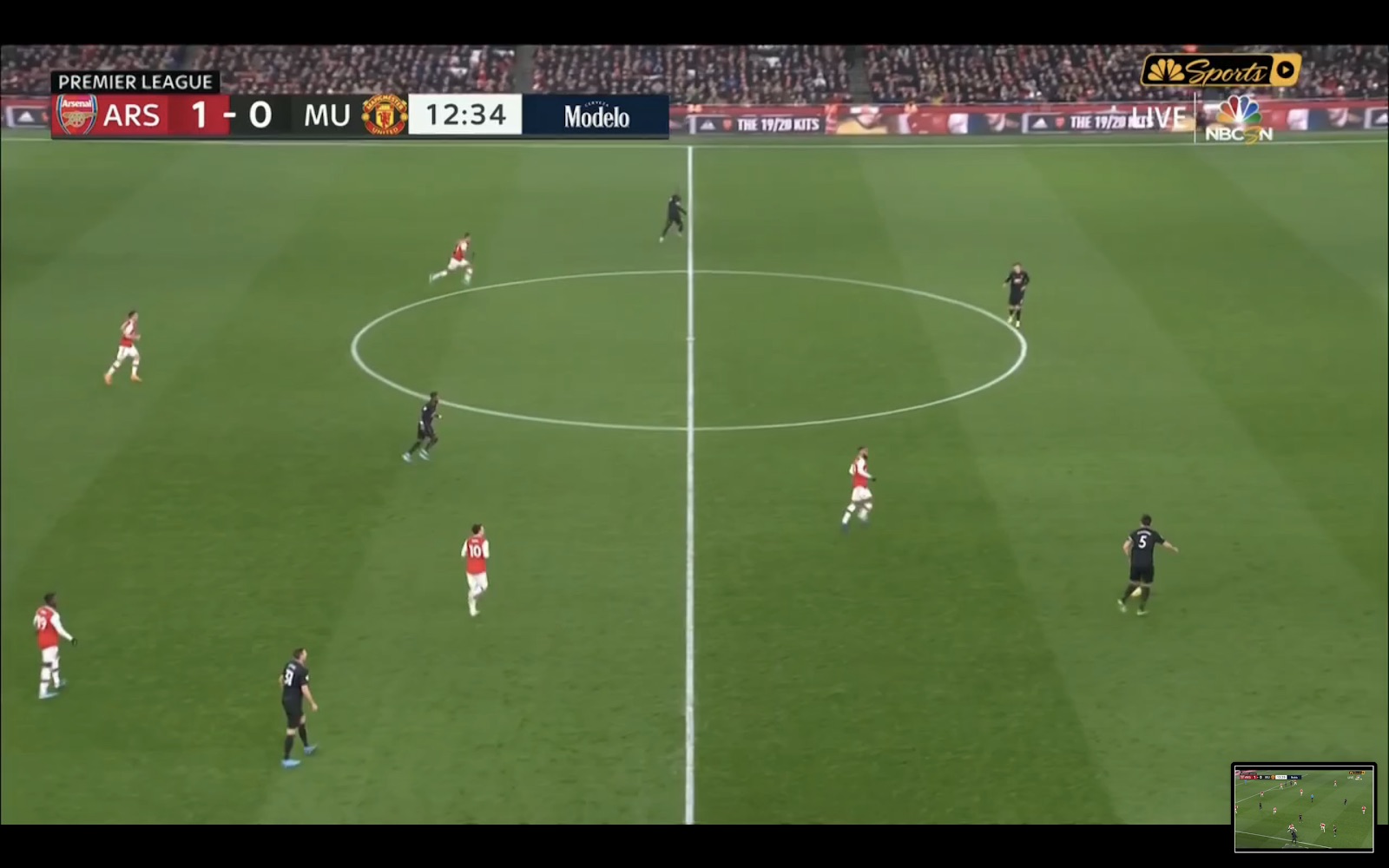 And when the ball was forced back, Arsenal covered each option with man-marking or blocked men off with curved runs and their cover shadows – @ThatGooner has already made a superb analysis of one particular scene in the first half.

Small one-clip analysis of our pressing yesterday (uninterrupted clip, then breakdown from ~00:30).

Pretty remarkable not only how much better the fundamentals are but also how quickly the players have bought into it, Özil most of all.https://t.co/CH8I6PsX9X #afc

How do Arsenal protect against the counter?

Transitions, transitions, transitions. Unai Emery’s Arsenal couldn’t handle them. Freddie Ljungberg spotted the issue but could do little to fix it, and when improvements were made it completely stifled the team’s attacking talent. And Chelsea scored a winner on the break late in Arteta’s second game in charge.

So what are Arsenal going to do differently and how did they protect themselves against one of the most dangerous counter-attacking teams in the country on Wednesday?

The central positioning from Maitland-Niles since Arteta came in has attracted some attention, and understandably so. It’s not exactly normal to see your right-back in the middle of the park, exchanging passes in midfield. But his function there isn’t just for when Arsenal have the ball but for when they lose it.

Frequently forming what could be mistaken for a three-man midfield with Torreira and Xhaka, Maitland-Niles offers Arsenal security in the middle of the pitch immediately after losing possession. 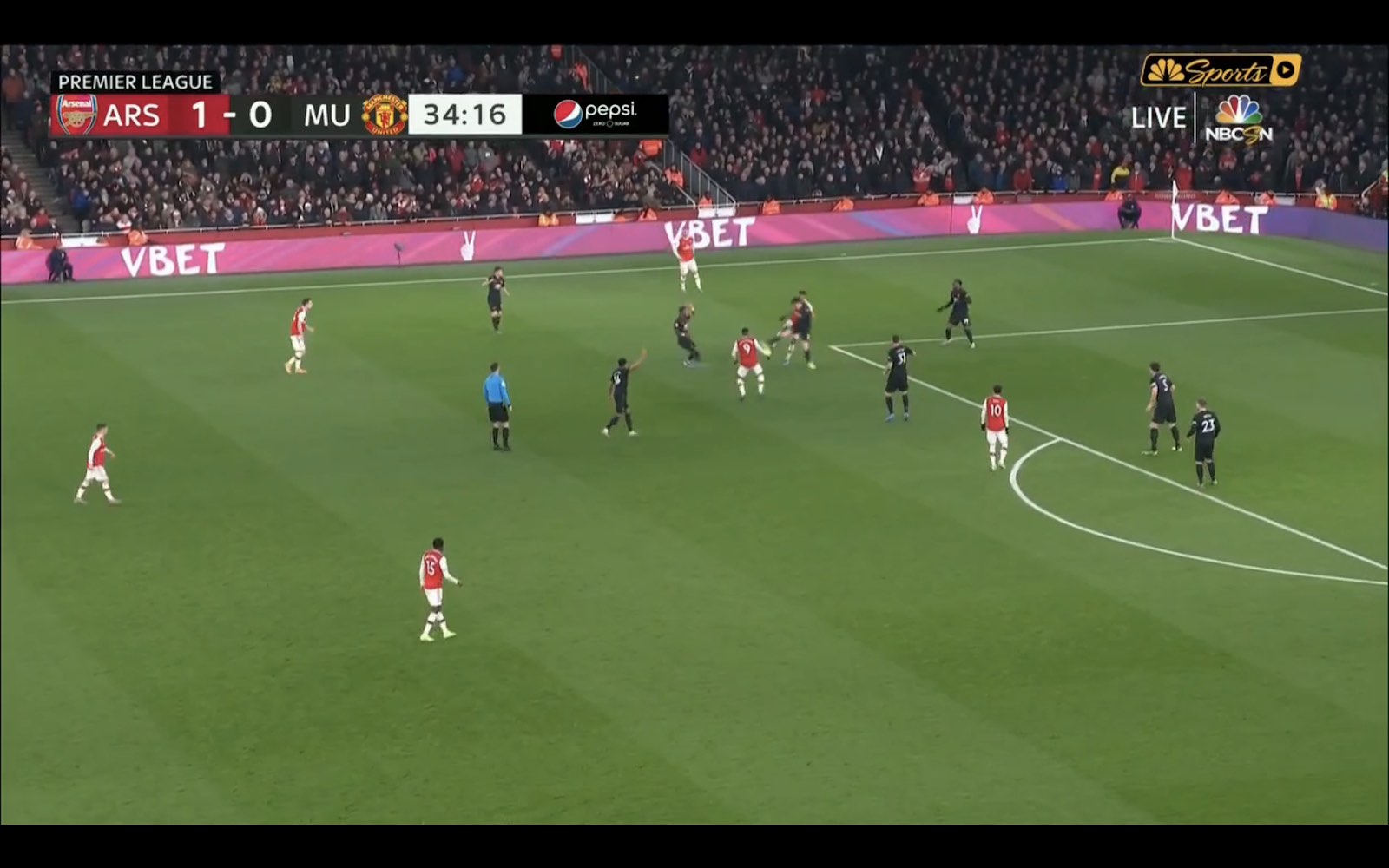 While central midfielders have previously been tasked with covering the entire width of the pitch between just one or two of them, suddenly Arsenal are well positioned to at least slow down a quick break and/or force an opponent wide.

While the two players closest to the ball – Aubameyang and Lacazette – chase after it after possession is lost, the three behind them provide protection ahead of David Luiz and Sokratis.

It was particularly nice to see this in place when Arsenal scored. The failsafe wasn’t required but the every possible counter-attacking threat was being marked from behind, with (L-R in the image below) Maitland-Niles, Torreira, Luiz and Xhaka keeping close tabs on their respective opposition players as the ball made its way to Nicolas Pepe. 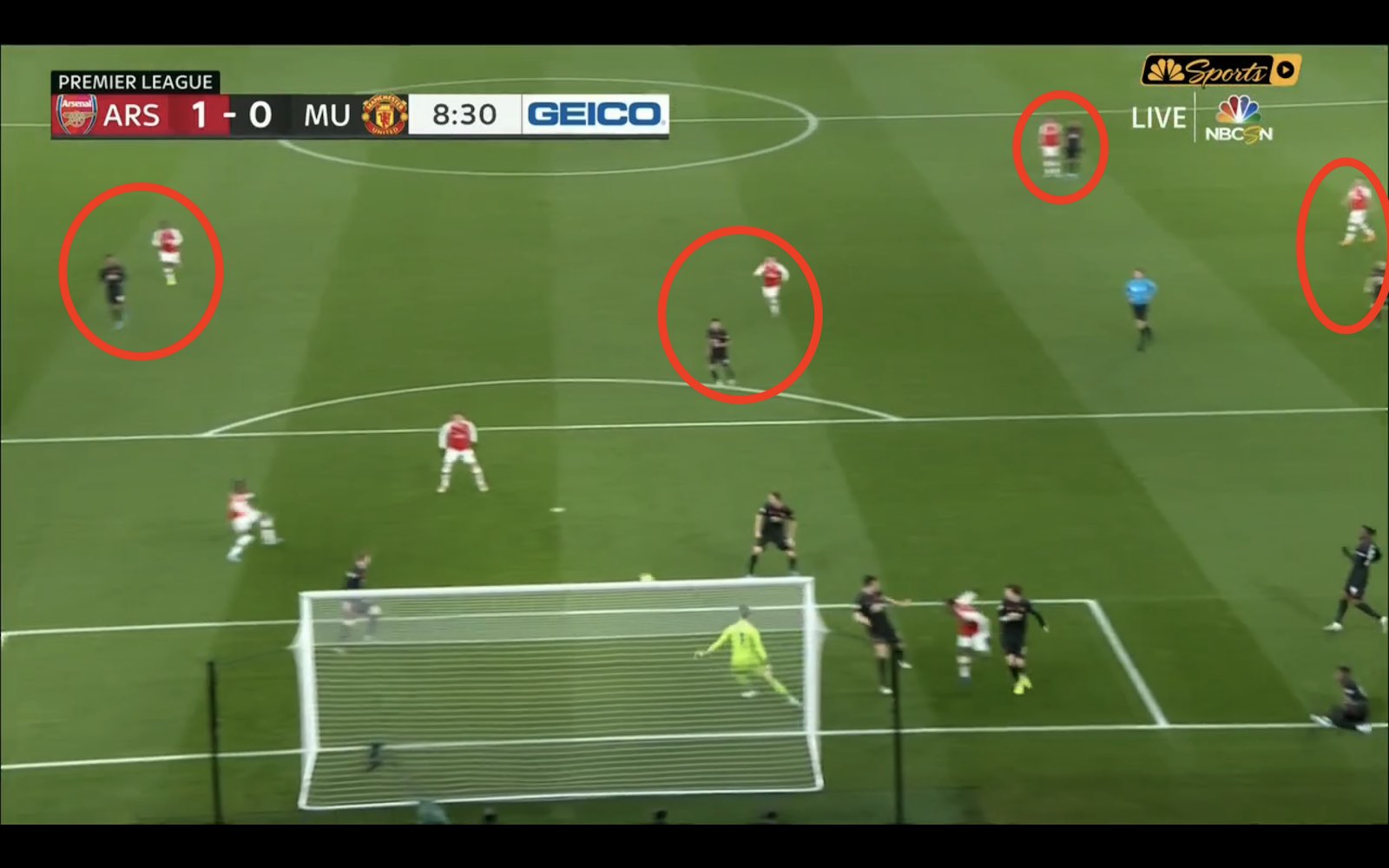 If Arsenal can keep this up, they should be much better equipped to face counter-attacking sides.

As far as I’m concerned, these questions are the biggest ones Arteta has to answer to turn Arsenal around and it’s remarkable how quickly we’re seeing his answers to them. If Arsenal can be better in possession, can play against a high press better, can press better themselves, and can protect against counter-attacks we’ll be a very long way towards being the team we all want to see.

Previous articleSomething In The Air
Next articleEpisode 558 – Everything is awesome