Home Arseblog, the arsenal blog Arsenal 2-0 Man Utd: Arteta is turning us into a team again 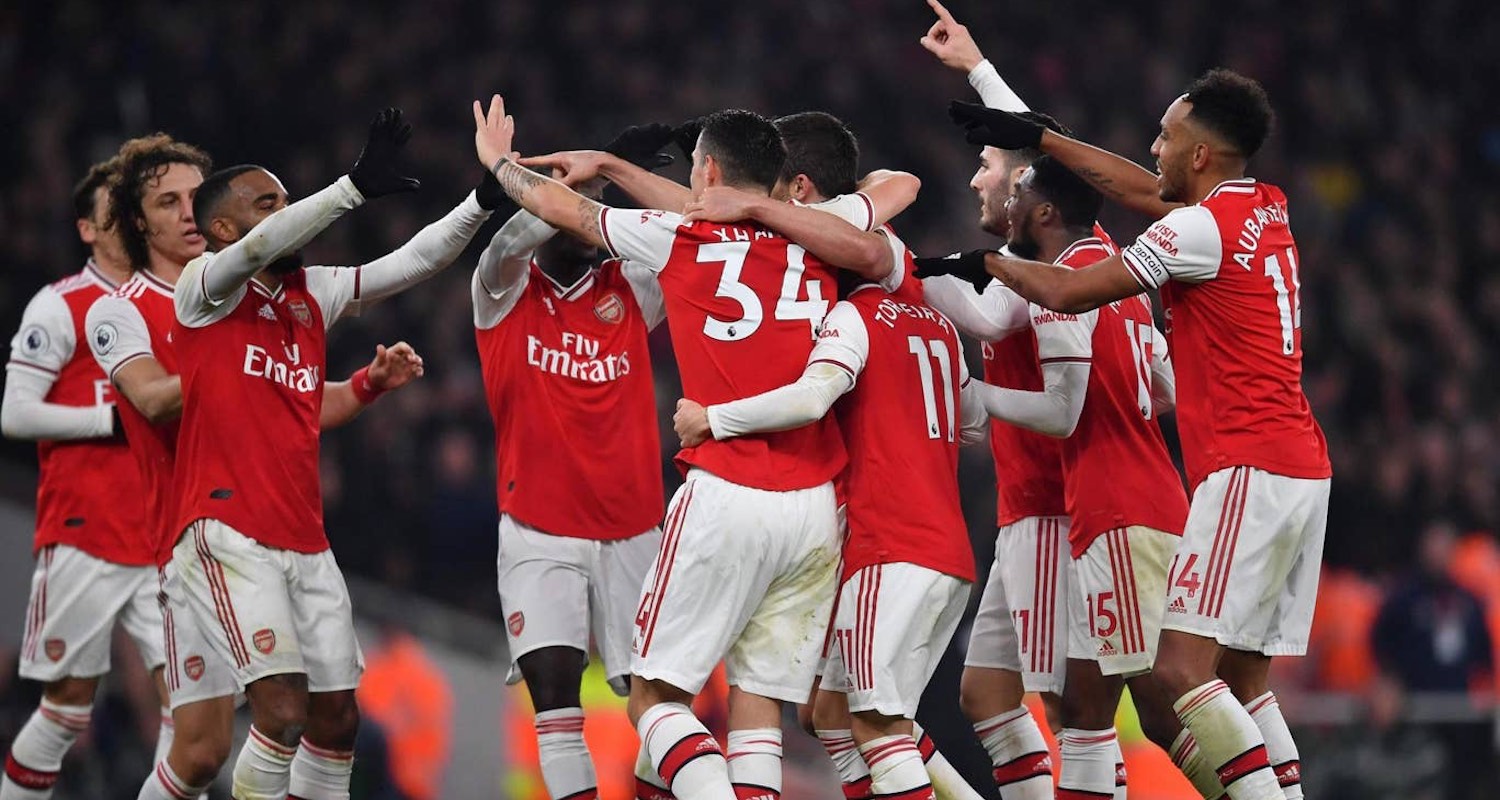 There was a moment in the 50th minute of the game when Man Utd regained possession in their own half. They had begun the second half quite brightly, as you’d expect from a team 2-0 down and looking to get back into the game. Arsenal, playing a third game in six days, might have been forgiven for sitting off, but like a kind of hive mind, the players snapped into action.

I’m sure Mikel Arteta has told them to press, but this felt like something more. Instigated by Granit Xhaka and Lucas Torreira they swarmed the United players with real intent, forcing them backwards. This was no half-hearted effort, this was full-on, a demonstration that the new manager has brought the mindset back around to the importance of the collective. Yesterday, Arsenal began to look like a team again … and it was great to see.

Perhaps there’s an element of any morsel of food being delicious to a starving man, but you couldn’t come away from that game last night and not be impressed by the impact Arteta has had. There are players in that team last night who have frustrated us, played well below the level acceptable, and they were absolutely superb. When things go wrong – and they have been going wrong at Arsenal for some time – there’s a tendency to dismiss the possibility that any of them might be halfway decent. Similarly, a good performance can see people put players on pedestals they don’t necessarily belong on, but by focusing on the importance of the 11 players as a unit, individuals are playing better.

I know it’s still really early days, but almost to a man there’s an individual improvement, and it was very interesting to hear David Luiz and Sokratis talk to BT Sport afterwards about how the players are enjoying the kind of football Arteta wants them to play. If you want to read it as tacit criticism of the previous regime, that’s not an unreasonable takeaway from it, but I prefer to look forward and consider what it might mean for this side in the future.

In the last few weeks, people have wondered where our new manager bounce was. We fell too far and too fast for a bounce, but what we saw yesterday shows we’re back on our feet at least and ready to go again. From back to front the difference between what we saw last night and what we’ve produced for most of this season is remarkable. These are the same players that couldn’t kick their way out of a wet paper bag just a few weeks ago, so what’s the difference? It’s structure, organisation, clear communication, and a genuine understanding of their jobs which allows them to play like this.

Yes, it requires commitment, a ‘buy-in’ (the buzzword of the moment) to what Arteta is asking them to do, and they have to push themselves physically, but at the end of it is a performance and a result like that. Legs feel much more tired when you lose, winning is hard work, but those players last night will have loved it. It shows that hard work will be rewarded, and that if you do what’s asked of you, we’ve got the ability to win games again.

It seems almost pointless talking about individual performances, but it’s hard not to. David Luiz looks like a real defender again, and seems to have taken up the mantle of a leader. Ainsley Maitland-Niles is flourishing under Arteta in a position he says he doesn’t want to play in, but which gives him a massive opportunity to stake a regular claim for first team football. Granit Xhaka is hardly Mr Popular around these parts, but he was superb and looked happy for the first time in a while.

One of the biggest indictments of the Emery era will be his refusal to play Lucas Torreira in his best position because he didn’t think he was big enough. The Uruguayan was phenomenal again last night. Mesut Ozil ran further than almost any other player, and this time did it for 90 minutes. Lacazette’s got a problem in front of goal right now, but along with Aubameyang worked his socks off, and then there was Nicolas Pepe. Starting a game in the Premier League for the first time under Arteta, he made a telling contribution early on with the opening goal after good work from Sead Kolasinac down the left hand side.

You can see there’s a very good player in there, but he’s an unpolished gem with aspects of his game that need some considerable work. However, his goal and his £72m price-tag meant nothing when his focus and effort began to wane a little in the second half. Arteta made the decision quickly, taking him off for Reiss Nelson in the 62nd minute, and while the record signing didn’t look especially pleased by the decision, that’s what will happen if you fall below the standards this manager expects. Nobody should be exempt from what he continues to call his ‘non-negotiables’.

Pepe had played a part in our second too, whipping in a corner which Lacazette flicked on, de Gea palmed out, and Sokratis thumped into the roof of the net. The set-piece was won by Maitland-Niles making a run down the right hand side and Ozil finding him with a delicious ball over the top. It took vision from the German, and positive intent from the full-back, but it was enough to play the game in their final third, and score the second goal we needed to get against Chelsea on Sunday.

Perhaps the most impressive thing about this performance for me was how we produced it in the context of this festive schedule. It’s been hard, energy sapping work, but this was a monumental physical effort. Obviously there are tactical elements, but underpinning that is a commitment to running those hard yards and staying true to the manager’s philosophy.

It sounds simple to say a footballer should be able to run – it’s his job after all – but we can all see a team where the players are giving everything they can and one that isn’t. We’ve been watching one of the latter for most of this season, in fairness, and that obviously begs questions of the players, but the bottom line is that when you have the wrong man in charge and they don’t believe, or understand, in what they’re being asked to do, that’s the obvious consequence. It’s not unique to Arsenal, it happens all the time in football.

Afterwards, a very pleased Mikel Arteta spoke about what the result will bring:

At the end of the day, we’re getting judged by results. That’s going to give the players a massive lift in terms of confidence, that they can play against any opponent in this league and be better than them, dominate them, and compete against them. That’s something that, in my opinion, for many weeks, they haven’t been doing together.

As well, what we are trying to create is not just words, it’s actually happening and you can see that happening. That generates more belief. That’s only about winning games.

Last night’s performance carried on from what we saw against Chelsea, but with a much improved result. Arteta has that first win monkey off his back, and you can see in the way we’ve played there’s a blueprint there which augurs well for what lies ahead. It’s early days still, but those green shoots are beginning to emerge from the scorched earth. Arsenal haven’t been enjoyable for such a long time, so to play like that, beat a team like United (even if they’ve got issues of their own), and take so much from a single game is really very pleasing.

We now have a little break from the Premier League grind, with an FA Cup tie against Leeds on Monday evening. I suspect that we’ll see a heavily rotated side for that, albeit one which will try to carry on the momentum of finally winning a game again. Much as I love the cup though, Arteta has to prioritise. He’s asked a lot of the players physically in the last week, and we have a thin squad as it is, so no doubt his selection will be informed by medical reports, ‘red zones’, and all the rest.

More on that over the coming days, and of course it’ll all be up for discussion in tomorrow’s Arsecast, so tune in/subscribe and all the rest.

Just a quick word on Arseblog News – we’re experiencing some issues at the moment which are making the site hard to visit at busy periods. First off, apologies for the inconvenience, I know how frustrating it is, but we are working on something which should alleviate the issues, so bear with us and we’ll get it sorted as soon as we possibly can.

For now though, just bask in the warm glow of a very good win, and hopefully we can kick on from here.