Despite having four potential options already at the club, Arsenal’s difficult start to the season only highlighted their need for improvement at right-back.

Their search concluded with Bologna defender Takehiro Tomiyasu arriving on deadline day. But who is the Japanese international, what will he bring to Arsenal and why is he costing €20 million?

Japanese football has produced the occasional creative midfield gem in Europe – Hidetoshi Nakata, Keisuke Honda and Shinji Kagawa spring to mind – but defenders have struggled to make their mark. One noteworthy example from the Bundesliga is Wataru Endo, who now captains Stuttgart after impressing in Belgium for Pro League side Sint-Truden.

History looks to have repeated itself with Takehiro Tomiyasu who was also brought to Europe by Sint-Truden, before joining Bologna who, like Stuttgart, are garnering a reputation for their intelligence in the transfer market. The 22-year-old thrived in Italy and now has the opportunity to fulfil his self-confessed dream of playing in the Premier League.

At face value, there is nothing ambiguous or subtle about Tomiyasu. He is a defender that loves defending. Bologna are tactically pragmatic under Sinisa Mihajlovic and used a variety of systems last term, involving both three and four at the back. The Japan international has a Cesar Azpilicueta-esque quality of not only being able to play across the defensive line – but play well across the defensive line. He was used at right back, right centre back, left centre back and even in midfield last season and performed well in each role, affording Arsenal options should they seek to mix things up.

Tomiyasu primarily thrives in direct duels. Like Gabriel, and to a lesser extent Ben White, he is naturally front-footed and feels comfortable in contact. As per FBref, his 1.8 interceptions per 90 minutes leave him in the 85th percentile against positional peers (full back) and you will often see him pressed up against attackers, looking to steal or divert the ball with an outstretched leg. But an encouraging facet to the 22-year-old’s game is his ability to assess situations and back off if needed – stalking the ball as opposed to hunting it – before pouncing. He is extremely measured despite his natural tendency to be proactive.

Even for those who haven’t watched the player; his aerial ability jumps off the page. A 6ft 2in tall full back who wins 3.5 aerial duels per 90 makes him a footballing unicorn. That statistic leaves him in the 99th percentile against other full backs – or the 85th percentile if you rate him against centre backs. Whether this was considered by Arsenal alongside the aerial ‘struggles’ of White (needing to babysit your new £50m defender is far from ideal) but Tomiyasu excels in his own merit. He times his leaps well and technically, opts to approach the ball late – with a small run up – to give himself more momentum in the duel. No more back post headers from tiny Manchester City midfielders, please.

But his penchant for defending should not detract from his technical ability. Tomiyasu can look clunky and unorthodox on the ball, but he moves quite smoothly (and with decent pace) considering his size. What will surprise people is his ability to distribute from deep and on both feet. Bologna are naturally conservative and do not demand line-breaking passes from their defenders, but the 22-year-old played 5.37 progressive passes per 90 last season – the second-highest in the team.

He also made 4.95 passes per 90 into the final third, second only to midfielder Nicolas Dominguez. He has the ability to play these passes but will mainly play safe upon instruction. He does boast one trademark lofted pass into the channel, similar to that of a golfer guiding his opening shot onto the green, which could prove useful for runners in behind. 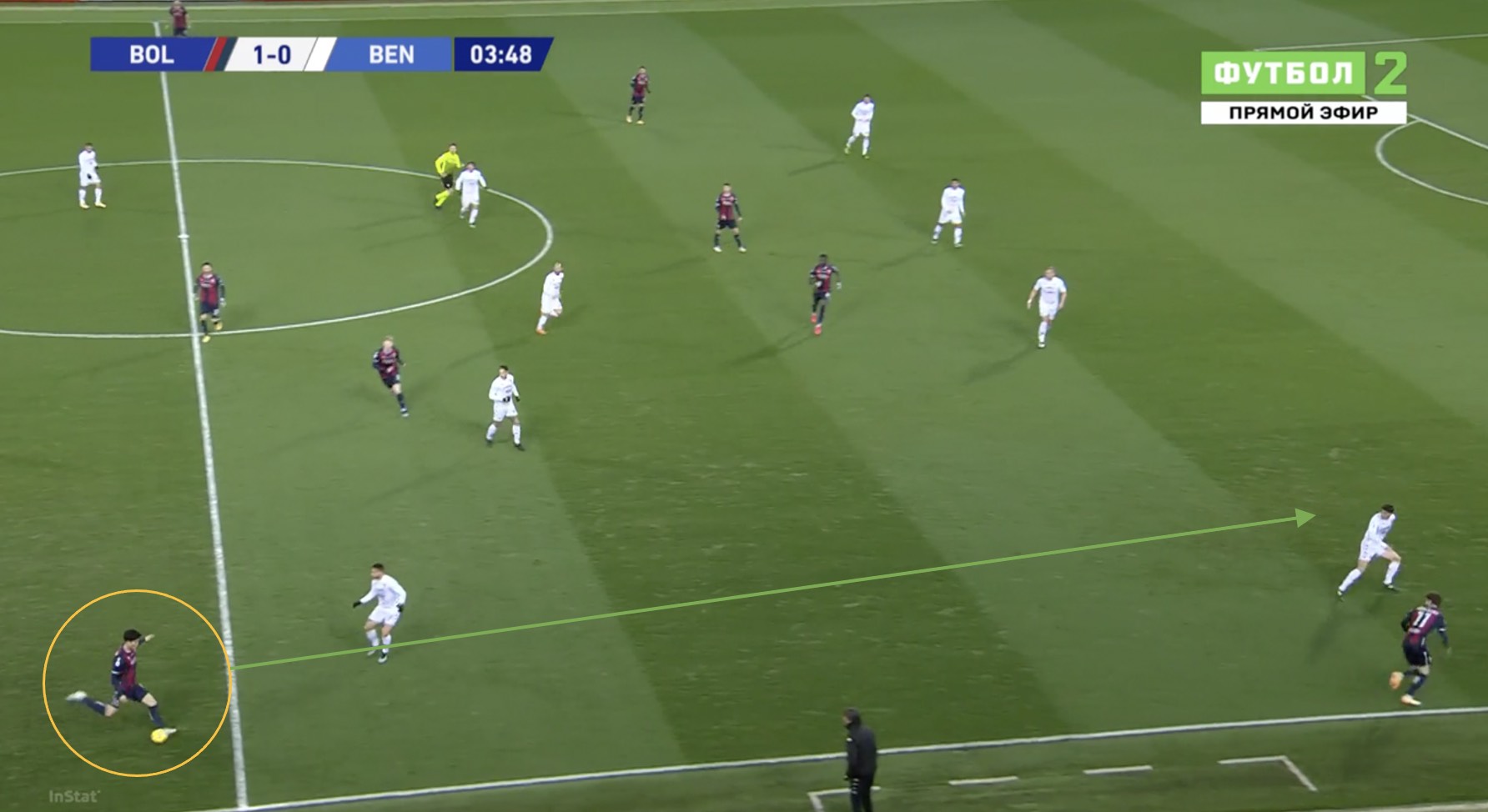 “In any emergency, he (Tomiyasu) would be my first contact,” Mihajlovic joked when asked about the defender last November.

“Tomi gives us full commitment in every game, in every position. We cannot ask for more.”

And that quote gives you an insight into the player. Arsene Wenger often marvelled at the attitude of Japanese players, who were hardworking and committed to the collective. Tomiyasu follows that trend which is an instant green tick next to his scout report. But there are some questions that require answering.

Calum Chambers forced his way back into the Arsenal side last term, largely in part to his hybrid skillset as a right back, centre back and everything in between. Tomiyasu replicates that role stylistically – is that what we want? Someone to tuck in as the third centre back during build up – like Chambers – but better? Or should we require more from our right back? The Englishman dwarfs our new signing in open play xA, key passes and xG build up – whether he can add further attacking quality to his play remains unclear.

And while many will consider his versatility a plus point, his best long-term position remains unclear. With Mikel Arteta muddling through tactics and systems – hopefully he will not fall victim to constant chopping and changing.

As explained in previous player profiles, the club have centred their summer business around talented, young players who immediately raise the floor of the squad and offer excitement for the future. Tomiyasu follows that brief and considering the standard of clubs who were interested in him – Milan, Atalanta and Tottenham to name just three – his €20m price tag represents good value.

His rapid rise in European football should be commended and despite needing time to settle, will be expected to come in and contribute immediately as Arsenal get closer to fielding their ‘favoured XI’ under Arteta. Tomiyasu has the physicality and defensive nous to excel in English football, adding some attacking prowess to his game would make this signing an excellent one.

Previous articleDeadline day deals (and no deals) + overall window thoughts
Next articleOh well, back in the team