I would suggest it wasn’t just the calibre of player that caused issues for Mikel Arteta and Arsenal but their positions. They are all central players, Arsenal had all their right-backs, left-backs and wingers available for the opening three games. By the time the Norwich game came around, the spine of the team looked very different.

Did I make this specifically for @YankeeGunner? I prefer not speak. pic.twitter.com/Yk2C7gOPtm

While Thomas Partey was eased back in from the bench, Arteta made an unenforced change in goal with Aaron Ramsdale replacing Bernd Leno. A lack of centrality was one of the team’s fundamental issues last season. For the first half of the campaign, they played without any kind of number 10 and it showed in the results. Thomas Partey was signed very late in an extended transfer window and subsequently struggled for fitness.

The ideal method of attack is to use central zones because, well, the goal is pretty central isn’t it? Teams use width because central zones are usually well guarded, going wide is a means to stretch teams out of shape so that you can eventually get into the middle. For large chunks of last season, using the flanks was Arsenal’s Plan A, B and C. They had little to no presence in the centre.

The returns of Gabriel, Ben White and Thomas Partey, as well as the signing of Martin Odegaard ought to go some way to fixing this for Arsenal. I would also argue that Aaron Ramsdale was signed with this purpose in mind. Ramsdale played more long passes than any other Premier League goalkeeper at Sheffield United last season.

This caused many to ask why Arsenal would sign a goalkeeper with a penchant for long kicking when playing out from the back is such a big part of the coach’s philosophy. I always felt Ramsdale’s long kicking was the point- in the day and age of advanced data, a club does not accidentally sign someone with these attributes.

This is the sort of pass that Arsenal don’t really get from Leno. Will be interesting to see if Ramsdale can produce it regularly against better teams

Arteta trusted David Luiz at centre-half and when Luiz’s contract expired, he signed the defender that maps most closely to his passing range in the Premier League in Ben White. Luiz wasn’t considered useful because he was tippy tappying around the edge of his area, his superpower was the big, booming diagonal ball that travelled 60 yards.

Long passes from the back are also a key part of Arteta’s philosophy. The whole point of playing out from the back is to invite teams to squeeze up the pitch and press. Having a goalkeeper that can drop the ball over their heads when they do so is pretty useful. It’s why Manchester City bought the foremost exponent of the art in Ederson.

It seems that Ramsdale gets more emphasis and more distance on his long kicks than Leno, who elects to put lots of backspin and loft on his long passes, which means the ball travels more slowly and takes longer to collect. It’s a small sample size, admittedly, but look at the difference in distance between Ramsdale’s distribution against Norwich and Leno’s against Brentford. 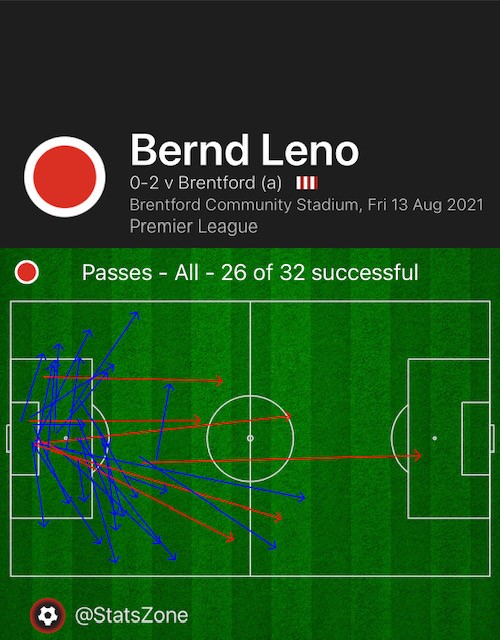 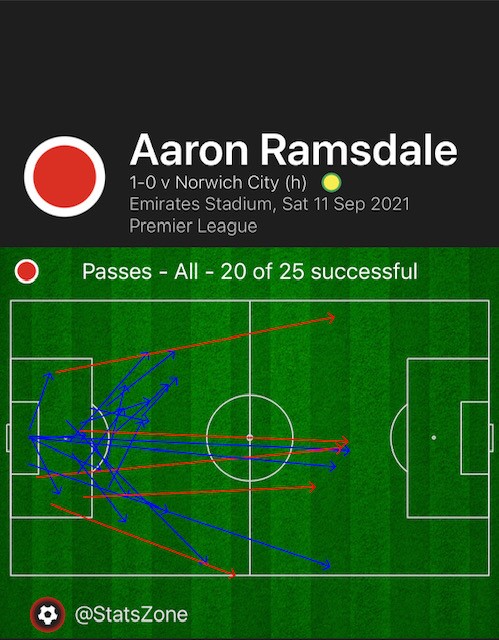 Longer passes put greater stress on defences so even if they are not completed, they open up avenues for counter pressing the opposition high up the pitch. It’s really an updated version of the “playing the percentages” theory espoused by coaches with a preference for long-balls and competing for second balls and knockdowns, which, though not to everyone’s taste, is an effective way of playing (as Arsenal found to their cost many times through recent years).

Gabriel is not famed for his distribution from centre-half, particularly. The way I look at the partnership between him and White is that Gabriel will very much be the bad cop, dirty shorts defender, with Ben White as the ball-player. However, again, look at the difference between Gabriel’s distribution against Norwich compared to Pablo Mari’s against Brentford. 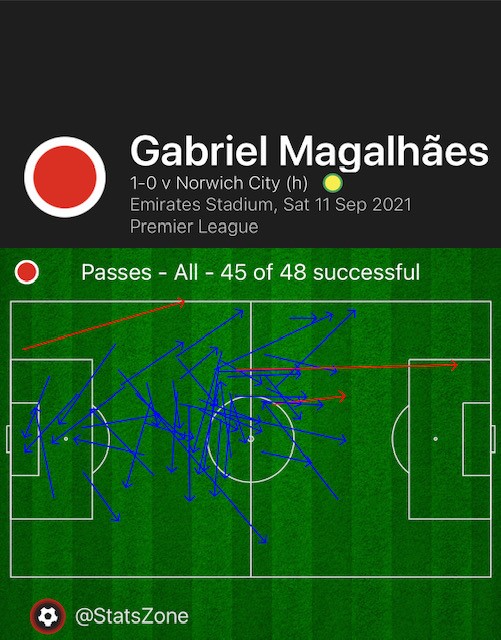 Gabriel passed into central zones far more often. Granted, this was partially due to the presence of Martin Odegaard and the absence of Granit Xhaka who sits in that left half-space and therefore impacts the distribution pattern of the left centre-half. Odegaard is crucial to Arsenal’s need for centrality, even though he drifts to the right half-space, when he does, he usually looks to come in-field and it balances off Arsenal’s tendency towards using Tierney on the left.

At this stage of his development, I prefer Smith Rowe in the left wide-forward position. I think he is the sort of player adept at creating wide overloads, while Odegaard has more of the natural qualities you would expect from a 10. Odegaard’s role is especially important given that Aubameyang does not relish dropping deep and joining in with the build-up. It puts extra onus on Odegaard to be present in that area and link the midfield and the forward line.

He likes to take the ball on the right and move in-field, with an overlapping run from the right-back used as a decoy. It’s worth keeping an eye on how the Norwegian’s relationship with Bukayo Saka develops. When Saka plays on the right, he too likes to receive the ball there and make knifing runs in-field. There is a fine line between getting your good players close together and combining and them getting in one another’s way.

That said, Arsenal were still missing something through the centre against Norwich until the introduction of Thomas Partey in the second half. His pass to Saka in the build-up to Aubameyang’s winner was the game breaking moment. Not only was it a sensational vertical pass but look at the position of Odegaard, attracting Norwich players towards him and opening up the passing lane. The partnership between Partey and Odegaard will be critical in this respect, whether it is through combinations, Partey finding Odegaard in central spaces or Odegaard drawing defenders away so that wide players can drift in-field. In this scenario, Aubameyang’s disinclination to join build-up doesn’t matter and he is able to simply score a tap in on the goal-line at the climax of the move.

Arsenal’s prospects of a good season rely a lot on the fitness of Thomas Partey. Albert Sambi Lokonga is a promising prospect but, at this moment in time, nobody else in the Arsenal team has that pass. Ramsdale and Gabriel can add some flourishes to Arsenal’s central play, White, Partey and Odegaard really hold the keys though.