With Arsenal planning a major summer rebuild, one of their oversights from the January transfer window remained high on the priority list – a new left back.

Their search varied across experience and leagues before landing at Benfica defender Nuno Tavares, who was officially announced today. But who is the Portuguese, what will he bring to Arsenal and why is he costing just €8 million?

Lisbon is not only home to the Belém Tower, rickety trams and unlimited supplies of pastel de nata – but two major football clubs in Benfica and Sporting CP. Both have dominated the Portuguese top flight throughout their histories and pride themselves on developing young players that succeed both domestically and internationally. But their rivalry is fierce and few have crossed the divide without resistance.

Nuno Tavares is unique in that aspect (although he experienced a watered-down version) having started his playing career at Sporting before joining the Seixal academy years later. After impressing at youth level, the defender made his first-team breakthrough during the 2019/20 season – filling in at right back for the injured André Almeida – before establishing himself further the following campaign with 14 appearances across all competitions.

Stylistically, the 21-year-old is very much an attacking full back and afforded license to bomb forward alongside the more reserved Gilberto. Under Jorge Jesus, Benfica deploy a standard 4-4-2 formation that places emphasis on their wide men to support strikers Haris Seferović and Darwin Nuñez up front. In theory, this could stifle the full backs but Álex Grimaldo (their first choice option) is also attack minded and made nine assists last season – more than any other Benfica player.

This system suits Tavares as when needed, he can replace Grimaldo without their formation needing to be changed. His starting position is very high and when receiving possession, his natural inclination is to burst forward or take on his opposite full back. Standing at 6’0”, the Portuguese is taller than most modern full backs but possesses great power when driving at full force. He completed 1.5 successful dribbles per 90 last term – a number bettered by just three left backs across the Primeira Liga. 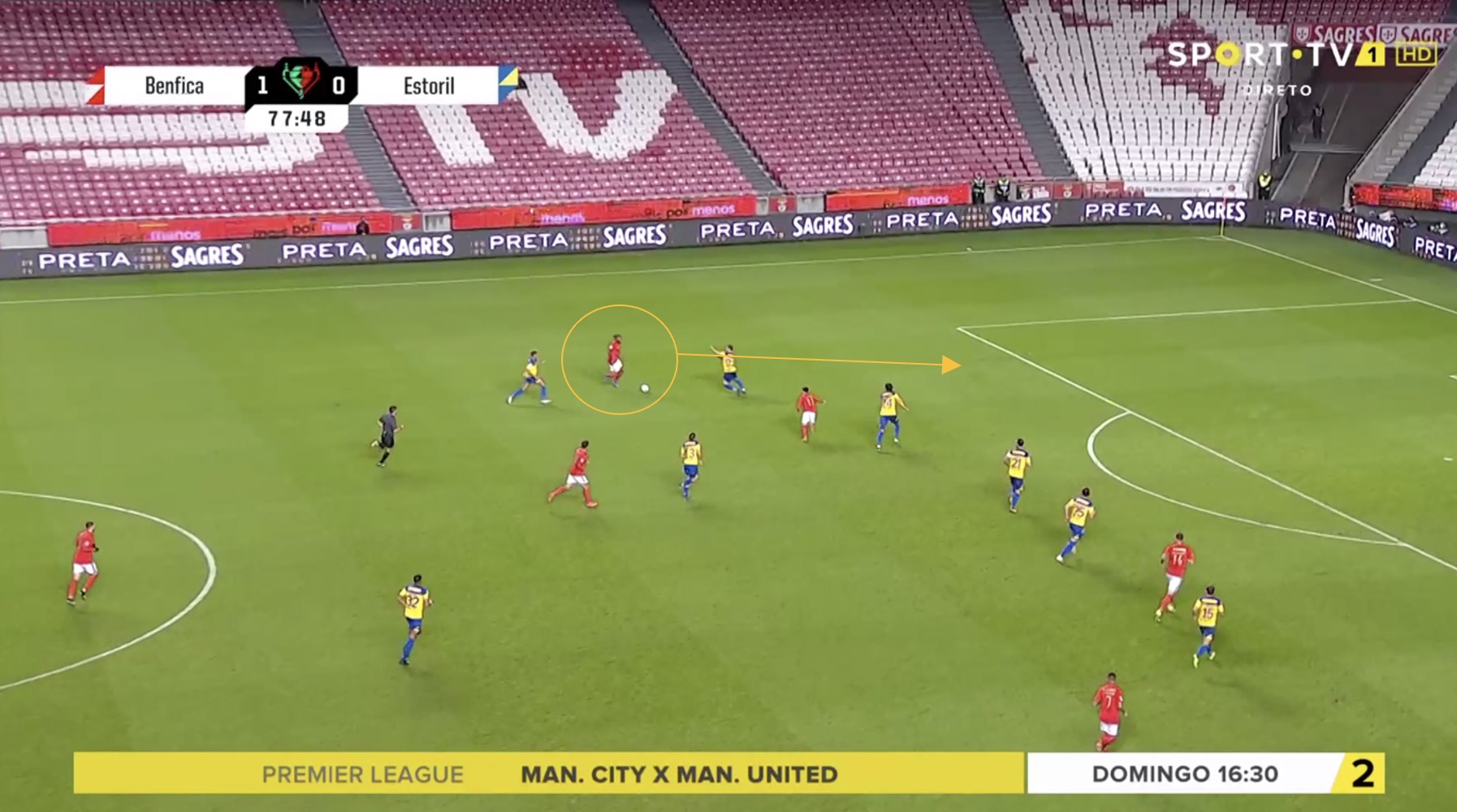 His running style can be compared to Alphonso Davies and Marcos Alonso, rangy with long strides, back hunched forward, but extremely difficult to stop when driving infield. But the 21-year-old isn’t just useful in the final third, but in his own and middle third as well. As per CrabStats data viz, Tavares sits in the 96th percentile for both progressive carries and passes compared to Premeira Liga full backs – proving again how dangerous he can be in transition. Fair warning: the sample size is small (90s completed – 9.8) but having that ability to cover ground and distress defences from deep will always prove valuable.

Undoubtedly his biggest strength is his crossing. What has made Kieran Tierney so striking at Arsenal (among other positive traits) is his ability to pick out teammates in the final third – a welcome change from Sead Kolašinac smashing the ball across with Hulk-like force. Tavares has great technique and puts in a variety of crosses; curled into the corridor of uncertainty, pulled back to the edge of the box and lofted to the back post. He is quick to execute these deliveries which unsettles defences, but there is a methodical nature to his end product that belies his frantic style. 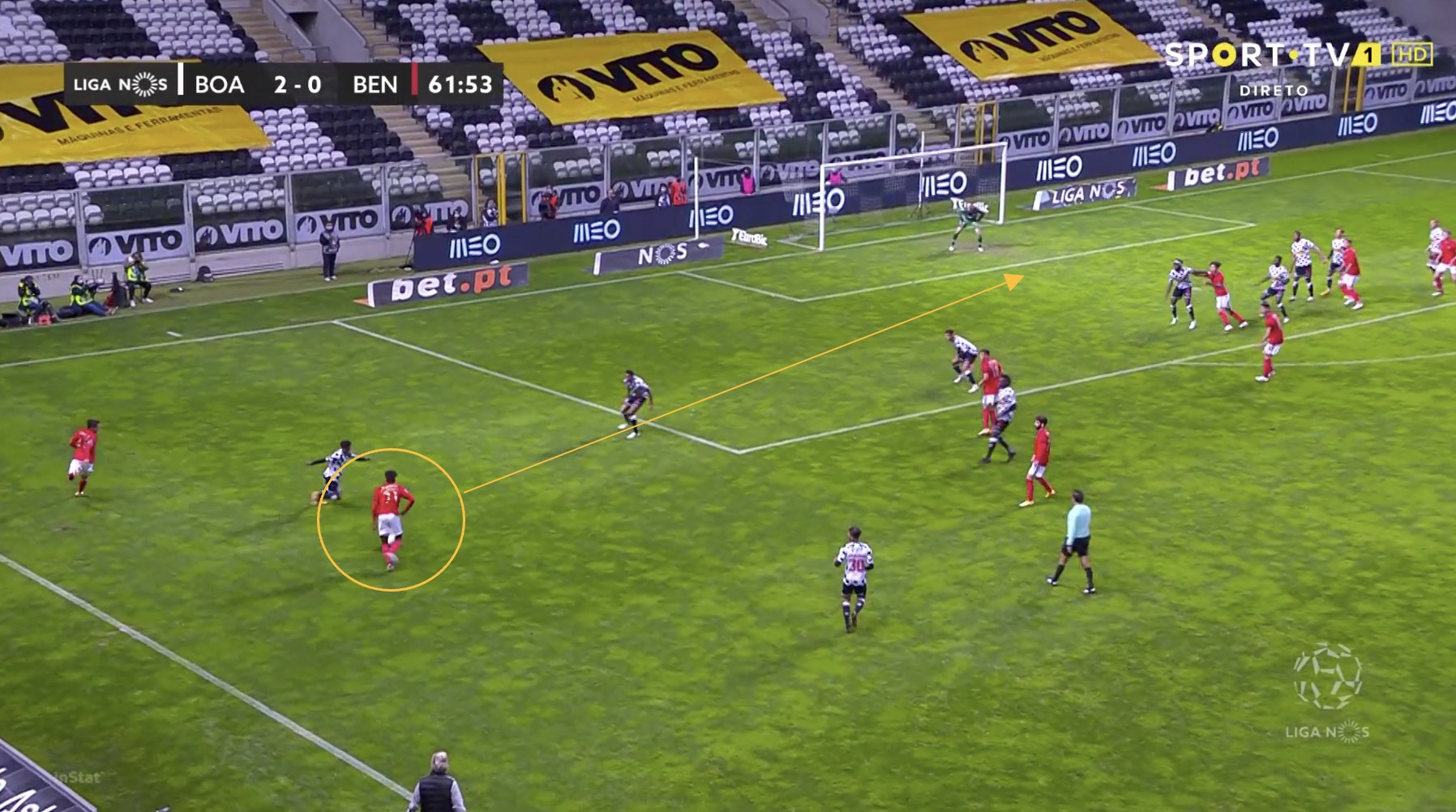 Defensively, the Lisbon-born full back embodies the spirit of Jekyll and Hyde. One minute he can make a goal-saving intervention and the next he is thinking about what to eat for dinner later on. His physicality in duels is impressive; Tavares is a stand-up tackler and shows good recovery pace against tricky wingers. But positionally he struggles, often getting caught flat footed and fails to track runners (before worryingly passing off blame to others). The hope is that young players are naturally inconsistent and Arsenal could coach these habits away but having watched the player at youth and senior level, his defensive instincts are always likely to be secondary.

“Nuno Tavares will be the future left back for Benfica and the Portuguese national team,” Jesus claimed when asked about Tavares last October.

“I have no doubts. Yes, he has a lot to learn, but I like his offensive qualities and his desire to always play forward.”

Things haven’t quite worked out that way. Despite his growing influence at Benfica, Tavares was at the centre of controversy after a private video – in which his barber called teammate Grimaldo a ‘Spanish c***’ – was leaked on social media. This led to some difficult exchanges with Benfica fans, before he later revealed a lion tattoo, which happens to be the nickname and emblem of fierce rivals Sporting. There are also concerns that he bought into his potential too quickly, with his mouth writing cheques that his performances couldn’t cash.

Considering the value Mikel Arteta places on culture and non-negotiables, these incidents seem undesirable for someone they want to bring into the club. But if conversations have been held and both parties are on the same page – then maybe a change of scenery could benefit everybody.

On a footballing level, the move makes total sense. Instead of bringing another veteran to the club – who fancies settling in London on their last big contract – they sign a young player with scope to achieve one of three things: provide back-up for Tierney, displace Tierney or move on without losing value. His lack of senior minutes makes assessing his ceiling difficult, but this was (and still is) a highly rated prospect coming in for a reported €8 million.

Arsenal needed a left back and they’ve signed one with minimal fuss. Tavares certainly has the tools to thrive in English football – whether he can is another story.

Previous articleAll or Nothing, or something inbetween?
Next articleNuno Tavares: Arsenal’s first signing of the summer