Pretty quiet one today. Nothing of any significance happened in the world of football in the last 24 hours, so there’s a dearth of news or incident to reflect on.

Oh, silly me. Of course. Congratulations to Brentford who earned promotion to the Premier League, beating Swansea 2-0 in the playoff final. There may be some ‘repercussions’, if that’s the right word, for Arsenal because for some time we’ve been linked with goalkeeper David Raya.

We were after him last summer, but they resisted our overtures and the Spaniard signed a new deal with a release clause. A clause that apparently does not come into play if they gain promotion to the Premier League (as per James in his big piece on summer transfers in The Athletic).

I can’t say I’m particularly worried about that. We may well need a goalkeeper this summer, and we have to consider the homegrown aspect of signings during this window, but this is a player that goalkeeping coach Inaki Cana is pushing for and given that his last recommendation was Alex Runarsson, I don’t think he’s earned himself another one. I know it was a weird window last time around, but if that’s the best he could come up with, he should stick to training ground drills. I mean, it also says something about our recruitment process that he’s even involved, but that’s another discussion altogether.

Elsewhere, Matteo Guendouzi is ‘close’ to Marseille, according to various sources, including L’Equipe and @AFC_TRANSFER_TRUTH98539402. This is quite a surprise to me after his ‘come and get me, oh please come and get me’ to Unai Emery this week after Villarreal won the Europa League, the only European final to take place this season for some reason.

This was his Tweet in case you hadn’t seen it: 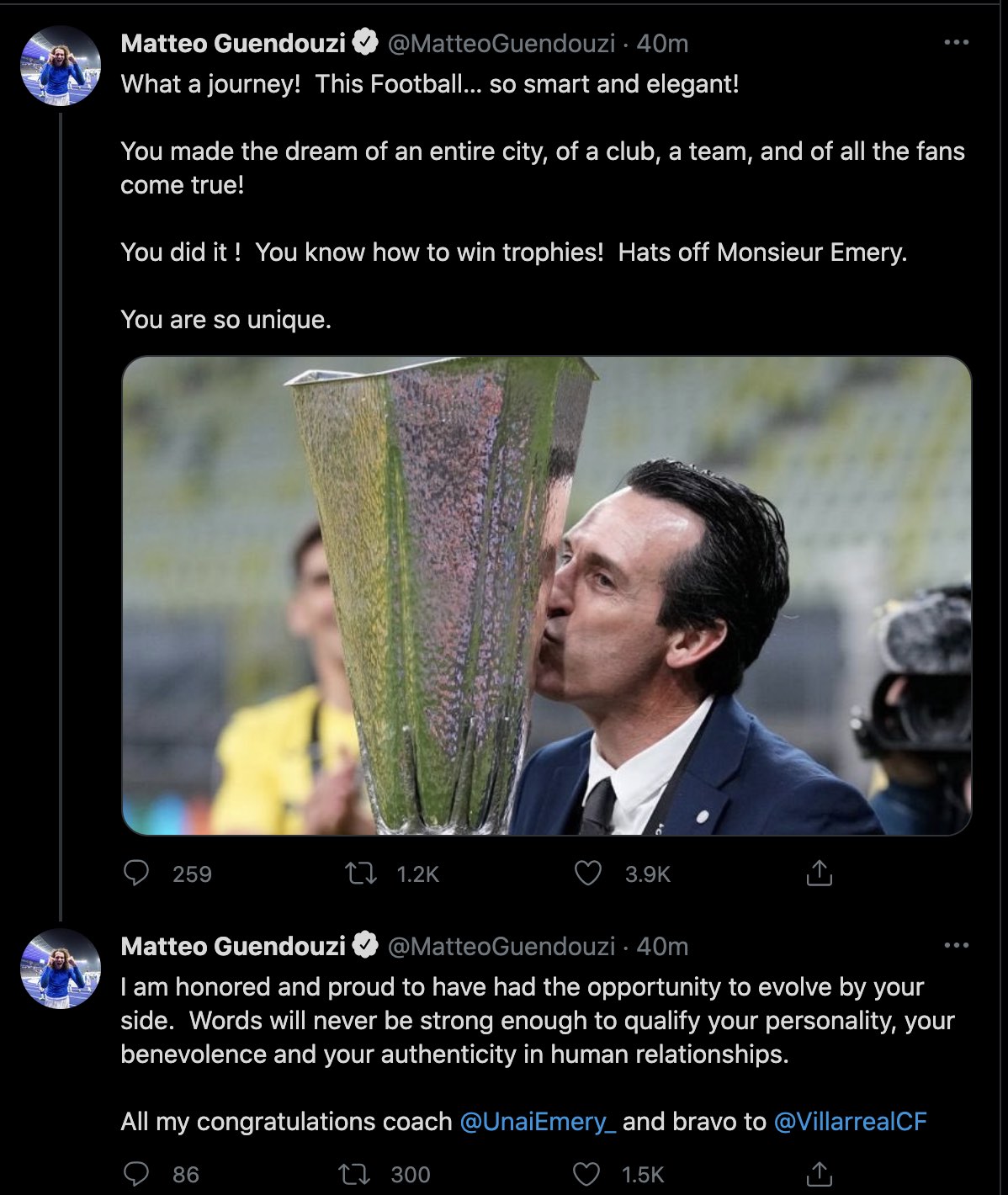 As a reminder, when Arsenal won the FA Cup last season, he posted this to congratulate his club and teammates: 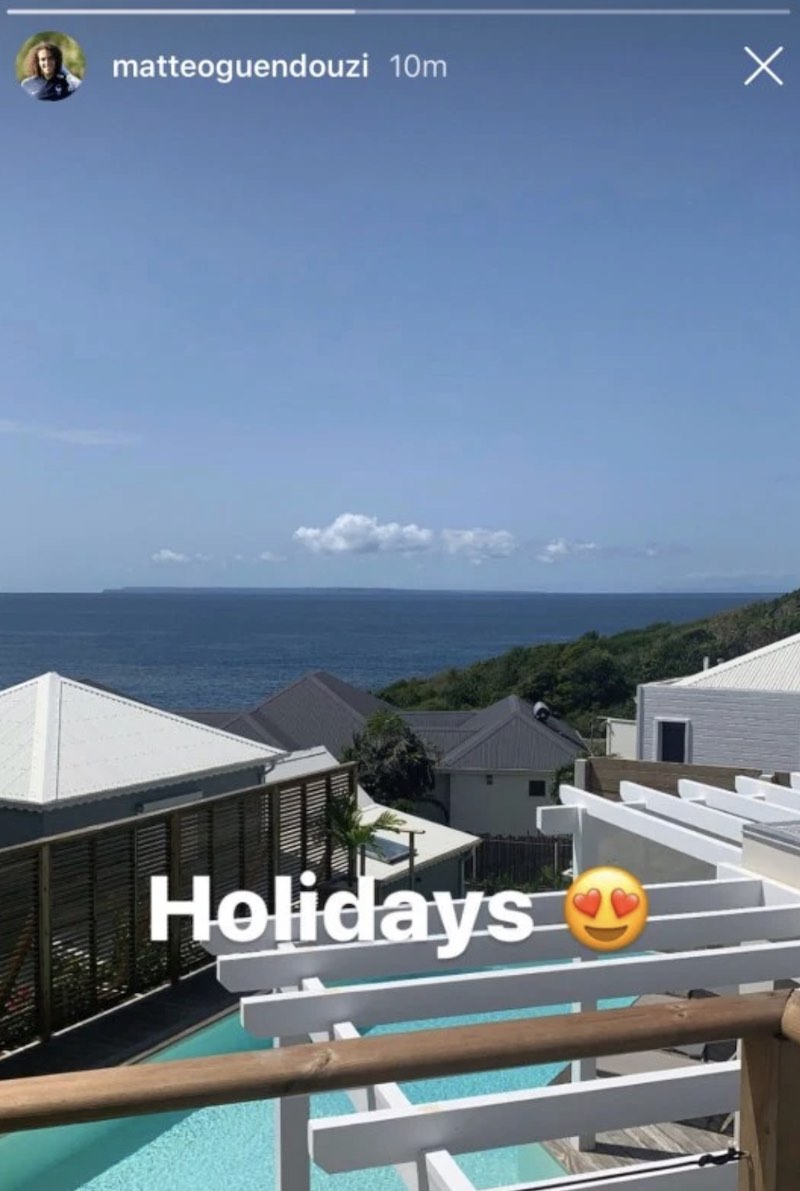 The fee is believed to be around €8m, which could rise a bit, and I do see the point of view that Arsenal played a part in tanking his value. That said, you could also argue that disciplinary issues that saw him unceremoniously dropped from the squad, a mediocre loan spell with Hertha Berlin, a worldwide pandemic, and the fact he’s got just a year on his contract also played a part. That, and the fact he’s just a pretty average player who was probably never worth the kind of fees people were bandying around.

Interesting to see some stories about Marseille also wanting William Saliba on loan. Take that first name, drop the M, replace it with an N, and then we can start talking. I’ll even throw in a robust, if somewhat scatty, left-back who could really put Marseille shirt sales through the roof in Bosnia and Herzegovina. Think of the bigger picture here, lads.

In seriousness though, the fact that Arsenal are very openly seeking a centre-half this summer, makes me think the Saliba situation is not as cut and dried as it probably should be. As a club, when you spend £28m on an 18 year old, you have to at least try and make it work, and so far – while I really did understand the need for a loan last season – we appear to be doing as much as possible to place obstacles in the way of this deal being in any way successful. One to keep an eye on, for sure.

Finally for today, over on Arseblog News Jon Ollington has put together a fantastic Data Viz post about Joe Willock, and the kind of player he is. He may not fit the manager’s current playing style, but perhaps that style is something he might give some thought to changing given we finished 8th.

Quite what happens with Joe remains to be seen, but in a summer when we could lose Xhaka, Guendouzi is on his way, Lucas Torreira is likely to follow him, and funds are limited to bring in replacements, I think there’s potentially a place for him next season. Let’s see.

Right, the sun is shining and it’s a beautiful day in Dublin. I have two big dogs who want to make sure everything around town is as it should be (free of cats and squirrels), so I’ll leave it there for now.

More tomorrow, including a brand new Arsecast Extra. Have a good one.

Previous articleGranit Xhaka: if the offer is right, sell.
Next articleIt’s a big, big summer for Edu