It seems almost apt that a week which began with the owners scoring a monumental own goal off the pitch, ended with a ludicrous own goal on it that cost us three points against Everton.

Bernd Leno’s fumble was a horrible error from a player whose form has tanked in recent weeks, and who Mikel Arteta now has to seriously consider dropping. Far from ideal ahead of a European semi-final, but if being ‘rested’ for the Fulham game was in part to just let him refocus after some difficult moments of late, it didn’t work.

There was some danger when Richarlison skipped past Granit Xhaka too easily, but if we’re apportioning blame on the goal it’s 1% on him, 99% on Leno. Your goalkeeper just can’t do that, especially in a game which had been pretty tight, and during a half when we were on top for the most part.

In the live blog, I was halfway through typing ‘Everton have been so poor this half their goal is really gonna sting’, and then that shit happened. Was anyone even remotely surprised? Our self-destruct button went off again, pushed by one of our own players, but it’s so damaging because we don’t do enough to offset it. Unlike other games of late, we don’t have chances to look back on and say ‘if only’. Pickford was barely tested really, and even though we were without Aubameyang and Lacazette, we lacked so much in our game.

You can’t put it down to what happened this week, because it’s happened so often this season. I suppose you can point to the penalty incident, which is a talking point. Was it soft? Absolutely. Was there contact? The smallest amount. Do I hate it when penalties are given against us for that? Yes. However, they are given, as we saw against Fulham last week, so if everyone else gets them, so should we.

Then VAR. Let me make this clear: I am not blaming VAR for our defeat. We didn’t do enough in the 90s minutes and that is our biggest problem. However, as I said last week, this was another example of VAR being used to find the smallest reason to disallow a goal – or a potential goal, as Pepe still had to put the ball in the back of the net.

The Ivorian was given offside in the build up, when he received a pass from Dani Ceballos at 50’45. From there he gave it back to the Spaniard, it was spread wide right to Calum Chambers who crossed it back in, Coleman headed it away, Ceballos picked it up and the foul happened at 50’58. In the room in VAR HQ, which I assume is an underground lair because that’s where all evil villains reside, they drew arbitrary lines, and the message flashed up on screen to say ‘offside’ with an image of Pepe’s elbow.

How? What is this nonsense? 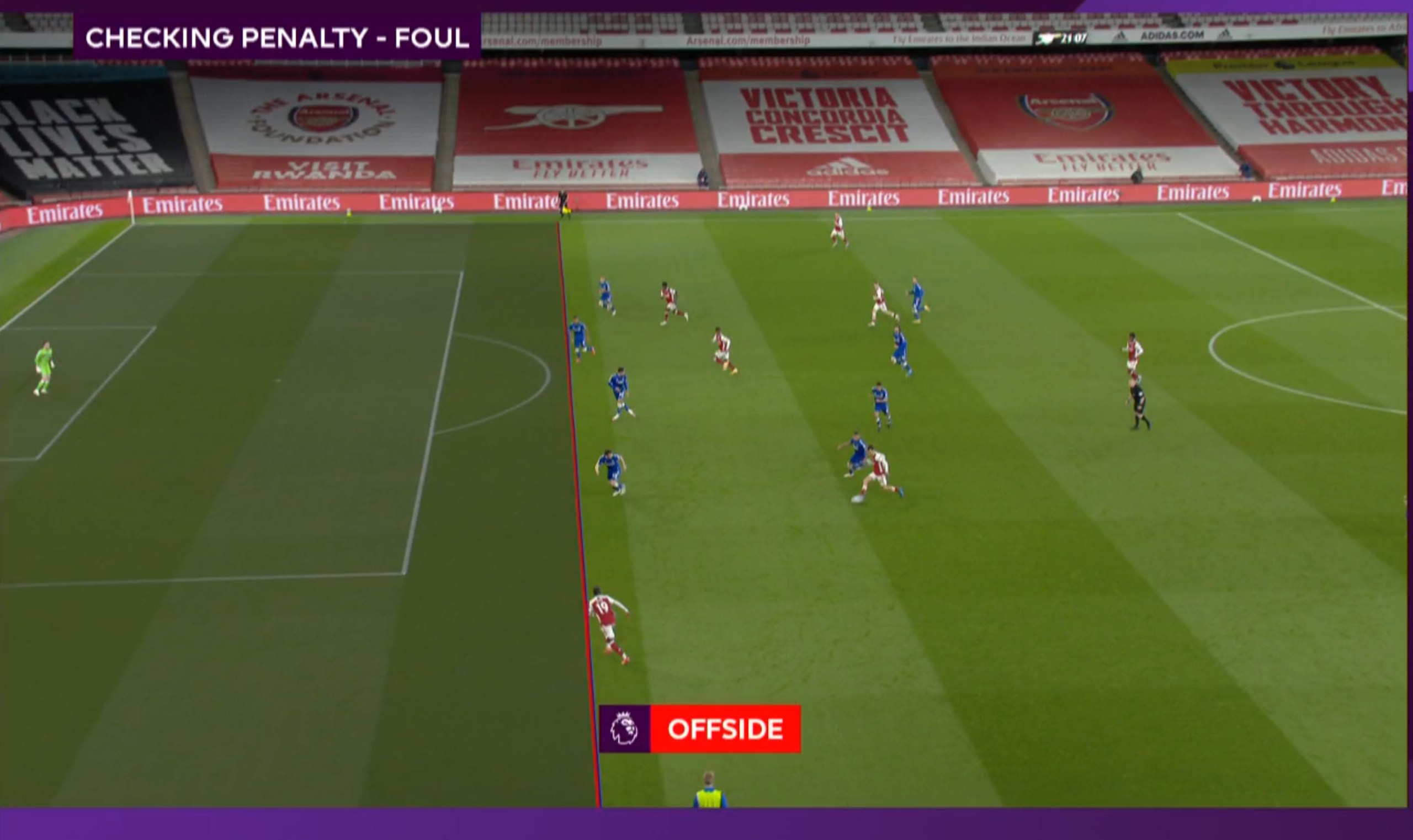 In a week when Florentino Perez, one of the architects of the Super League, insisted it had to happen because the attention span of young people was such they couldn’t concentrate for 90 minutes (I know, right?), football would do well to consider incidents such as these first. Those rare few of us left who can spend 90 minutes watching a game of football can’t be arsed with bullshit like this, where goals – the single most important thing in the game – are being ruled out by wankers with digital rulers for ‘offsides’ that are basically imperceptible without the technology.

Without VAR, that incident would have probably sparked discussion about how soft the decision was to award the penalty. Not a single sane person would have even thought about whether Pepe’s elbow – which you can’t score with anyway! – was millimetres ahead of a defender in a phase of play almost 20 seconds previously.

I just can’t express how much I hate VAR. I wish the collective power of football fans and people who love the game that was on display this week could be harnessed to raise a serious objection to this, because it brings nothing to football, and takes far too much away for it to be considered something worth persevering with. If it was the odd thing here and there in a system which helped you get more right it would be a different thing, but this is too much, far too frequently. KILL IT WITH FIRE.

We have had many of them, and no one explains. When they explain, they say, ‘sorry, it was a mistake’ but unfortunately it is affecting a lot of people, and it is affecting our job and most importantly our football club.

Enough is enough, and today, to be fair, I had enough.

Which, coincidentally, is what many people might feel about a manager who has presided over Arsenal’s 13th league defeat of the season. That’s not good enough either. I had previously thought that whatever happened this season, Arteta would be safe going into the summer, but I have a suspicion that after this week, with the ire directed at the owners, they might feel the need to be more proactive if we don’t achieve Europa League success. If the Kroenkes are on relatively steady ground despite the protests and the weight of public opinion, it feels like Arteta’s is much more shaky and could rest entirely on what happens in Europe.

And how could he possibly argue if that were the case?

We knew beforehand that the Premier League was not the most important thing left this season, but each defeat still hurts, and is damaging in its own way. Now, on top of everything else, the manager has a goalkeeping problem to consider before the first leg with Villarreal, and whatever decision he makes there has repercussions for the rest of the season. Does he stick or twist?

The only real positive was that Martin Odegaard got some playing time ahead of Thursday, but beyond that we learned little we didn’t already know. A painful night on the pitch, while off it protests against the ownership were playing out. I could only see what happened on TV and via Twitter, but that was a hell of a crowd and the message was clear.

To finish today, a first-hand account of the protests from Andrew Allen (@aallensport) who was there to see how it all went down. Have a good Saturday, more from me tomorrow.

The Kroenke out protest

As I hot-footed my way from Holloway Road towards the stadium, I overheard a young girl, probably no more than seven or eight, asking her mum if there was a match on at the Emirates. I couldn’t help but smile. It’s been some time since so many people descended on the stadium en masse – over a year in fact – and for any locals, it must have been a clear sign that nature is healing.

From a few hundred metres away, the chants of the early arrivers grew louder and the acrid smell of the smoke bombs worked its way up the nose. Smoke bombs are great by the way, definitely a fun addition to any occasion.

By the time I reached the roundabout in front of The Armoury, it was immediately obvious that this was not going to be a low-key affair. It was just before 6 pm and there were hundreds of people milling around on the concourse above. Banners of all shapes and sizes, some professionally printed, others spray-painted, were proudly displayed over the media area – “KROENKE OUT, Arsenal One Love”, “KROENKE – GET OUT OF OUR CLUB WE ARE THE ARSENAL”, “KEEP HIGHBURY TIDY! KROENKE OUT”.

A few wore masks, most didn’t. Social distancing was not on display. Youthful enthusiasm most certainly was. As someone pushing 40, I felt old as a crowd of youngsters came pouring down the stairs holding placards and screaming anti-Kroenke ballads in full voice. “Get out of our club, get out of our club, Stan Kroenke, get out of our club”. Simple, effective and easy to sustain.

A few of the most excitable kids clambered above the media entrance and did their best to play cheerleader. One guy raised laughs and a lot of confusion by proudly waving his placard with the simple message that said “Jenas eats babies”. Quite what that had to do with anything, I don’t know, but it underlined that there was a fun, laid back vibe to a gathering convened to get across a serious message. About Kroenke, not Jenas.

The police kept their distance as the crowd continued to swell. More smoke bombs went off. More chanting. More beers. More chatting. More laughs at fresh banners proudly unfurled. Kudos to the guys with “Pin the fail on the Kroenke” scrawled on their piece of cardboard.

You almost have to admire our owners’ part in a project announced just the wrong side of lockdown. Ballsy move waiting for the pubs to open before unleashing hell on yourself.

I caught up with a couple of familiar faces (good to see you, Jim!) and after an hour or so, decided to make my way back to the tube in the hope of getting home in time for kick-off. The carnival didn’t look like ending anytime soon so I wasn’t surprised to hear fireworks going off by the time I tuned into Sky’s coverage of the match.

Well done to the supporters’ groups who mobilised everyone. You’ve done us proud this week. The message is clear: we’ve been embarrassed by the way our club’s name has been dragged through the mud and we’re not going to let those responsible get away with it scot-free.

After a tough week, I felt proud to be a Gooner. It’s just a shame about the football…