It has been interesting in recent weeks to observe Mikel Arteta’s use of his squad. Even with the January “player redundancies”, Arsenal have a large roster and have transitioned into a very mix and match approach with regards team selection. There is a choice between Saka and Pepe as the inverted winger on the right, a choice between Willian and Smith Rowe as the left sided attacker who moves in-field to play as a dual-10.

Smith Rowe and Ødegaard are both capable of playing as the number 10 who drifts more towards the right flank. Lacazette and Aubameyang alternate the number 9 role. The central midfield duo of Xhaka and Partey is pretty set with Elneny and Ceballos capable of plugging in when required. Cedric, Bellerin and Chambers have all put in excellent performances at right-back of late. The centre-halves have also rotated frequently in recent weeks.

It’s really only Kieran Tierney who doesn’t have an obvious rotation option. The most interesting rotation, however, is at centre-half where it is difficult to predict which combination we will see from game to game. Below I have listed the centre-half pairings for the last ten matches and what is striking is the lack of overall consistency.

Broadly, we know that Pablo Mari and Gabriel will play on the left of the centre-half combination. Both are very similar styles of player, they both like to engage with attackers high up the pitch and get touch tight, both know how to cover a marauding left-back as well. Then the right-sided option is between David Luiz and Rob Holding.

Luiz and Holding have not played together since the Brazilian’s red card against Wolves and, interestingly, Luiz has not played on the left of the defensive pairing since then either. This is largely because Gabriel and Mari have that left-sided role on lockdown. Luiz has played the last five games with Holding falling out of favour since errors leading to early concessions against Aston Villa and Manchester City.

Luiz is no stranger to errors of course but he does, in my view, attract an inflated level of publicity for them. Were he responsible for the mistakes that led to the concession of the early goal at Villa Park or The King Power Stadium more sensational headlines would have been generated in my view. Luiz is a magnet for criticism which doesn’t mean it is not deserved per se; but I do think his mistakes draw more attention due to his reputation. (I genuinely believe had he had a short back and sides for the duration of his Premier League career, his reputation would be different).

Arteta likes Luiz in his defence ahead of Holding because of his superior passing range. Moving him to the right of the pairing has suited Arteta too. Granit Xhaka is the key distributor on the left side of the build-up phase so there isn’t the need to have Luiz there too. When Arsenal build-up from the back, they move into a kind of back three shape, with Xhaka (in green in the image below) veering over to the left, Gabriel (circled in black) or Mari stay central while Luiz (in red) inches towards the right touchline and the full-backs push on. 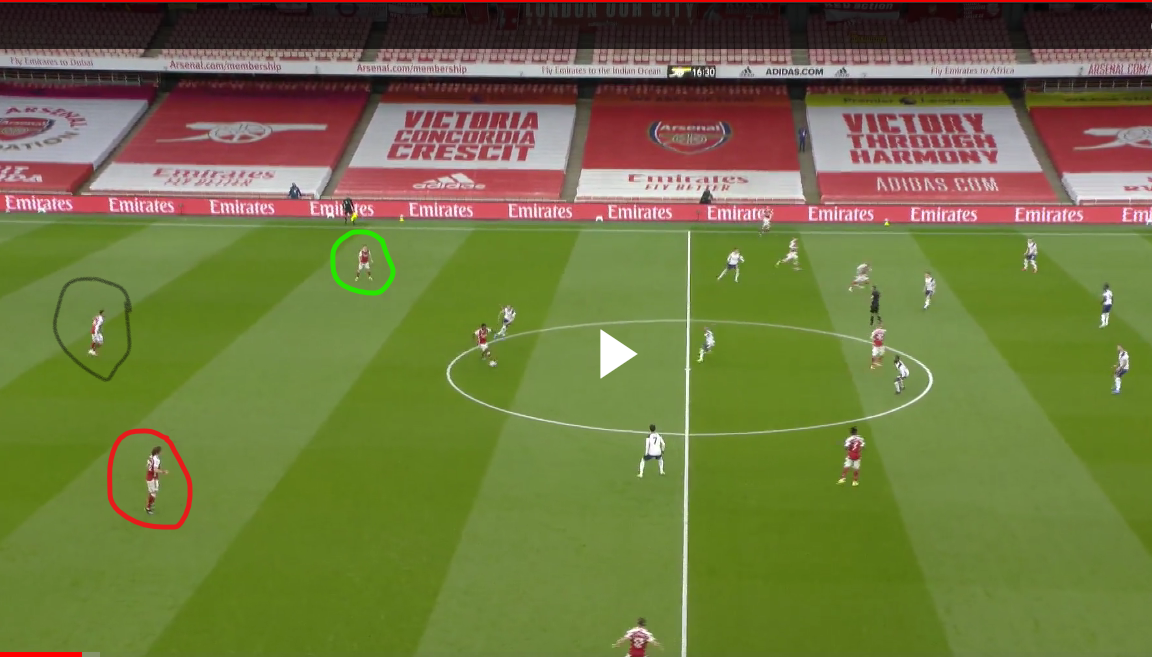 It gives Luiz the opportunity to send the ball up the right flank towards Bellerin / Cedric or Pepe / Saka. The Brazilian’s range also means he can equally switch play to the left quickly with a long diagonal, dropping the ball into the space behind the opposition right-back to either Tierney or Aubameyang. This was a move Arsenal used time and again against Leeds, for instance, look at Luiz’s passing map against Leeds. 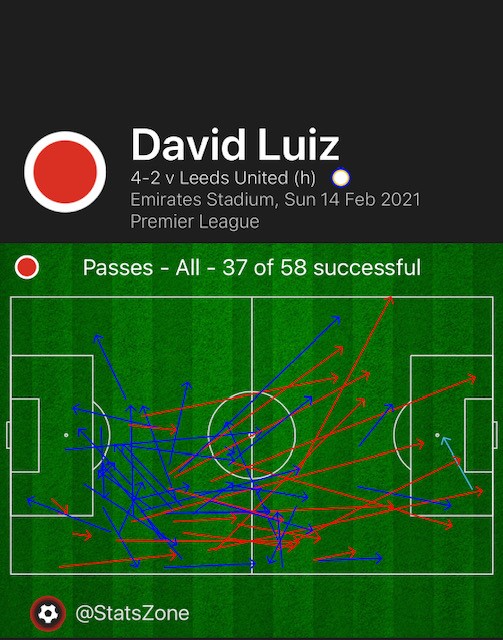 Last season, Arteta tolerated / rejuvenated / indulged (delete as appropriate) Shkodran Mustafi because of his passing range, particularly his ability to hit diagonal passes to the left flank. Luiz does this to a higher level. In the table I posted above showing the centre-back combinations for the last ten matches, Luiz features in eight of them- more than Gabriel (six), Mari (three) and Holding (three).

In short, Arteta likes him possibly more than any of the other centre-halves at his disposal- though there are caveats. Mari and Gabriel have not been available for all ten games due to injury. Prior to this ten-game sample, Rob Holding played in 12 out of the previous 14 fixtures- the two matches he missed were cup games for which he was rested. The picture can change quickly.

All of which leads to the question as to whether Arsenal will extend David Luiz’s contract for one more year. We are told that Arsenal offered Mustafi a new contract last summer which the German turned down. We are also told that Arteta is very keen to procure another centre-half for that right sided spot. The latter point might prove to be an inconvenience for William Saliba, currently on loan at Nice.

With Mari, Gabriel and Holding all considered long-term options in the heart of the defence, one would imagine that Luiz would remain until the torch can be passed to Saliba. Yet the noises we are hearing (and, in fairness, the evidence we have seen) suggests that Arteta is not sufficiently enamoured to hand William Saliba a prominent role.

I think buying another right-sided centre-half would leave Saliba’s Arsenal future in doubt, to say the least. Arteta might reason that one more year of Luiz could allow him to groom and shape Saliba in the background next season, allowing him to play in the early rounds of cup competitions so that he is ready for a more prominent role in 2022-23.

Luiz is seen as an encouraging training ground presence for younger players, dating back to his time at Chelsea and he is a French speaker, if Arsenal wanted to forge a more direct mentoring relationship between Luiz and Saliba. Mari, Holding and Gabriel don’t have the same amount of top-level experience as Luiz and would be far less suited to this type of tutoring role.

Budget might ultimately dictate the decision too. Arsenal’s finances have been hit by covid and we don’t yet know what level of European competition (if any) they will compete in next season. Player sales will continue to be a key driver for summer recruitment again. In short, Arsenal have other priorities and might not have much money to play with.

Signing Luiz on a one-year deal while Arteta proves his coaching attributes by moulding Saliba into the defender he wants might be the most expedient decision. Spending big money on a right-sided centre-half when there are more pressing positions might not be the wisest call. Luiz’s salary is not insignificant, Edu might have to strain his friendship with Kia Joorabchian by negotiating it downwards a little….

This season has seen the schedule compressed and that is not a short-term issue. Next season will be played off the back of a Copa América and a European Championships and the 2022-23 season has a World Cup positioned snugly in the middle of it. Having five centre-halves doesn’t strike me as excessive. I am convinced David Luiz will be offered a new one-year contract and I wouldn’t be surprised at all if he were to be an Arsenal player in 12 months’ time.