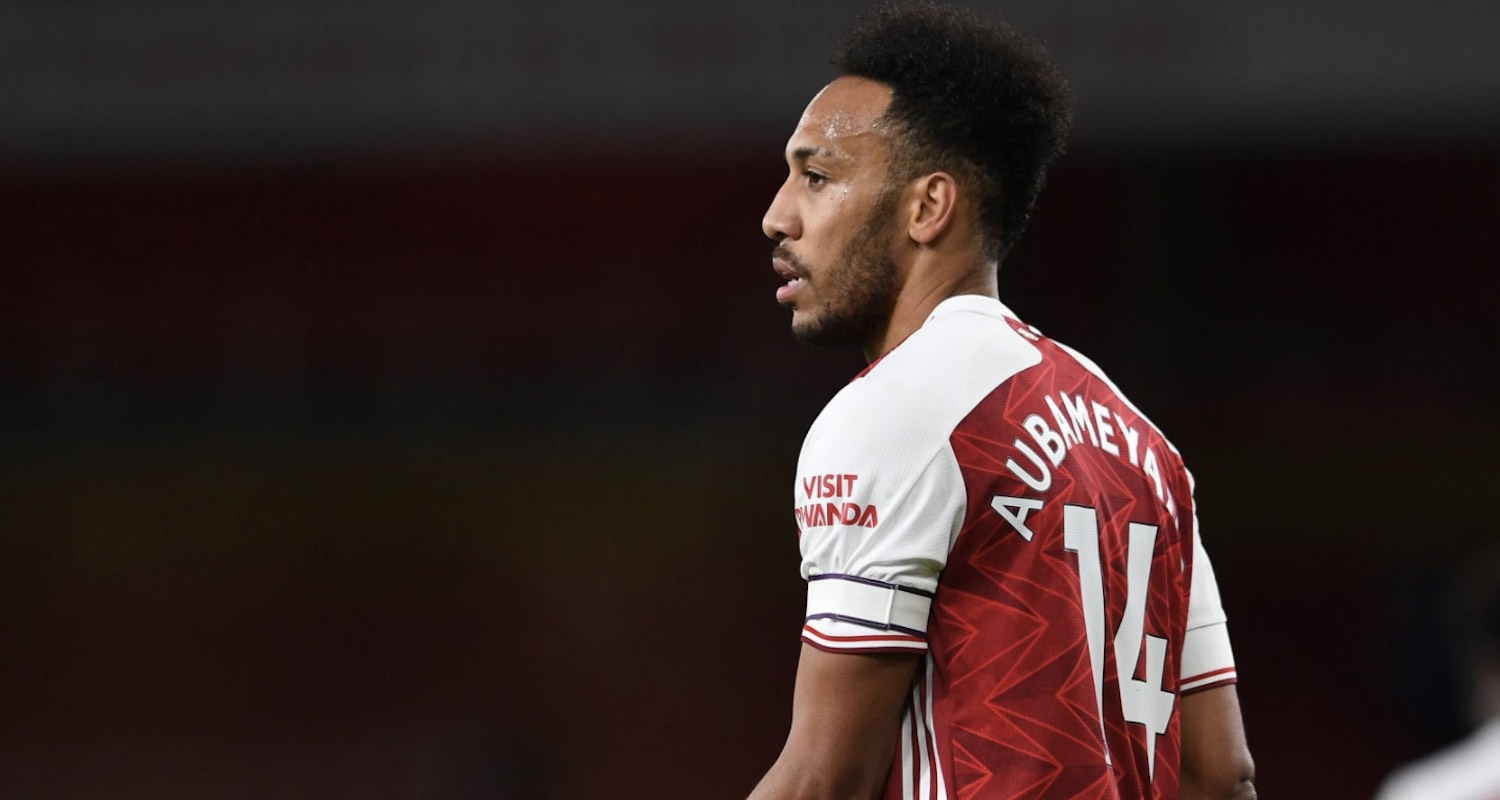 Aubameyang is used to being the scorer in chief, and Arsenal were hoping it was a role that would see him continue to thrive when they handed him an enormous new contract at the start of the season.

The new deal was celebrated by fans and the player alike.

“I believe in Arsenal,” he said. “We can achieve big things together. We have something exciting here and I believe the best is to come for Arsenal.

“I want to leave a legacy, this is where I belong, this is my family.”

The start to Aubameyang’s new deal couldn’t have looked much worse. The Gabonese has scored three goals (one a penalty) in 14 Premier League appearances since finally putting pen to paper in September, despite being moved into his favoured central position for a number of those outings.

Could Arsenal have done more to anticipate this dry spell and should they have held off on giving a 31-year-old striker a big new contract? The key question is whether or not Aubameyang has really declined or if Arsenal are simply failing to create enough good chances for him.

There are two typical goals that come to mind when you look at Aubameyang’s prolific life as a striker. One is a simple finish from a low cross, where he either lurks at the back post and stays there, or lurks there and darts across a defender at the final moment. The other sees him run in behind the opposition backline, then finishing a one-on-one, sometimes with a chip, sometimes a placed finish. That’s the striker Arsenal signed.

Of his 31 Bundesliga goals in 2016/17, an incredible 18 of them were one-touch finishes from the back post or within the width of the goal. Tap-ins. A further six came from him making a run in behind the defence.

His first Arsenal goals follow a similar pattern. Of 10 netted under Arsene Wenger, six were taken quickly from a ball into the box or a rebound. Two were from runs in behind. Of his 41 goals under Unai Emery, 20 came from lurking at the back post and his sharp movement, and five from runs in behind.

And under Mikel Arteta, the majority of his goals have again come in the same way. Back post finishes against Bournemouth, Newcastle, Leicester, Man City and runs in behind against Palace, Everton and City. But they’ve become increasingly rare and he has had no choice but to take shots further and further from goal. 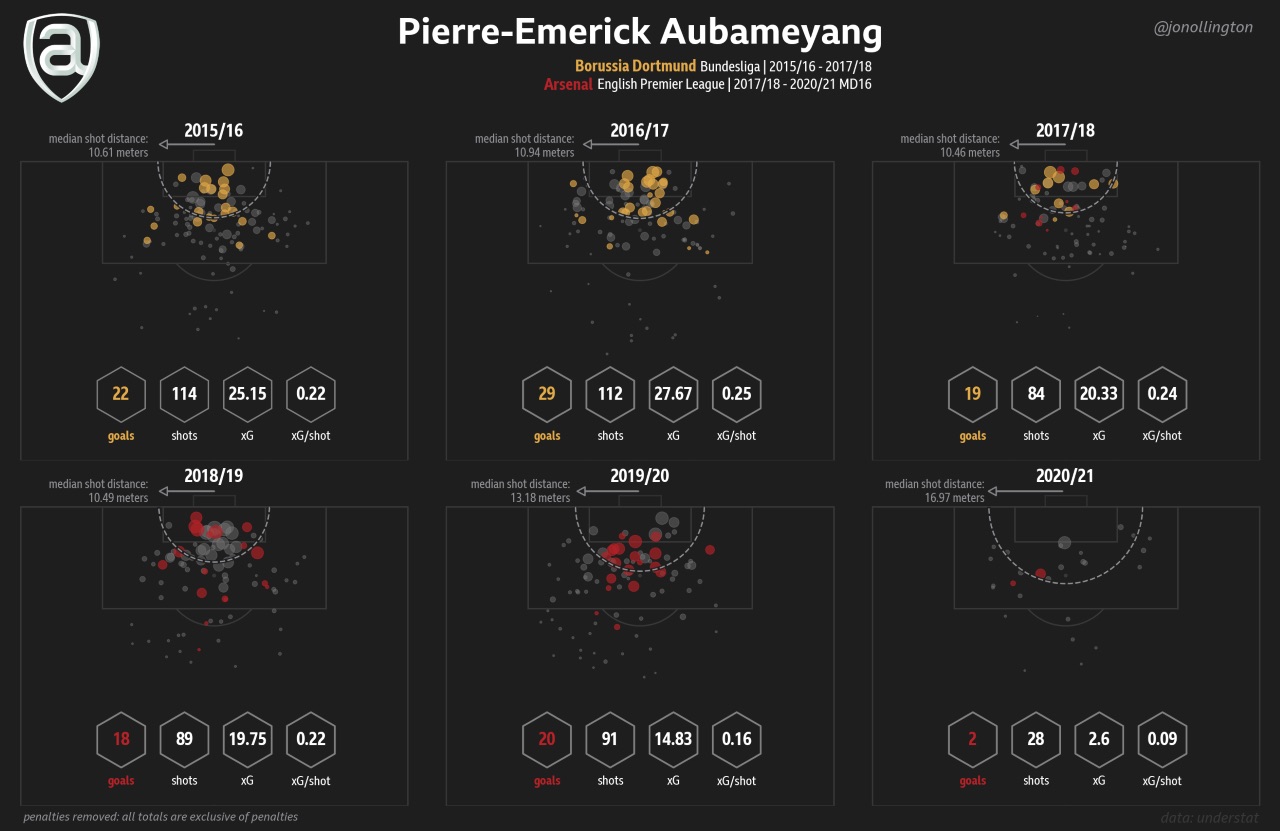 The question is whether those big chances aren’t arriving anymore because of Arsenal or because of Aubameyang. It’s a question that’s harder to parse from the data than many others, and a closer look at his performances suggest it isn’t all the Gabonese’s fault.

His half-hour cameo up front against Sheffield United suggested his movement is as sharp and as intelligent as ever, even if he didn’t get any chances. He then started up front against Wolves and Burnley and barely had a sniff, but looking back at the games with a focus on him and a pattern emerges: his movement was there. The ball just didn’t come. It didn’t come early enough, or driven enough, or accurately enough. And sometimes it didn’t come at all.

Look at his movement from those games and you see the same ticks, the same faints, the same darts that made him so prolific a few years ago. It was there again against Brighton on Tuesday, as Arsenal looked sharp in a 20-minute period. One time it did arrive (more on that later) and another time it didn’t. 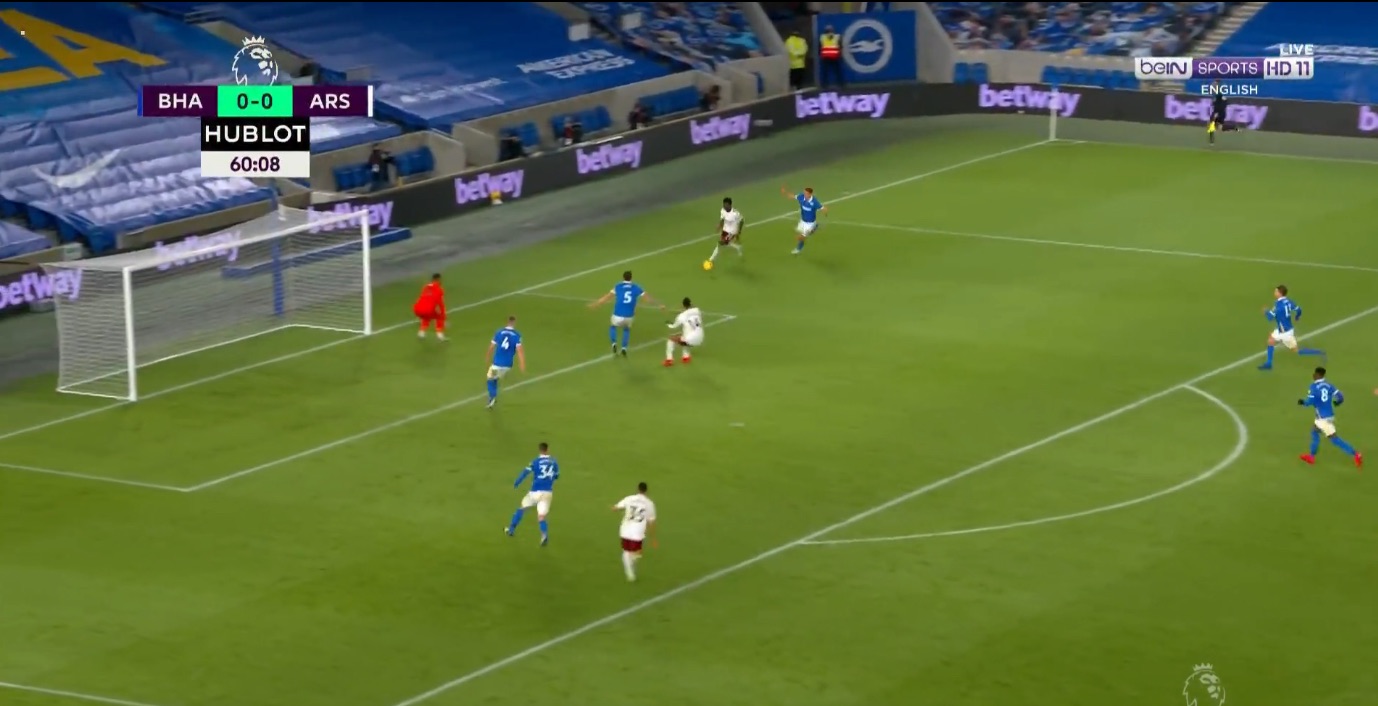 And the data supports the video. Aubameyang used to take an incredible number of shots from central areas (assisted from out wide) either inside or just outside the six yard box. Those efforts have completely dried up. For Arsenal this season, and last, the ball simply hasn’t arrived to Aubameyang in dangerous positions. In fact, it hasn’t since Arteta took over.

Even if the ball had arrived, Arsenal have not been delivering it from the right areas. The ball is, to borrow a basketball term, rarely arriving from the ‘elbow’ of the box and is being swung in from far too wide to pose a threat. See how many of the shot assists at Dortmund (yellow, above) come from inside the area or from the elbow. Compared to Arteta’s Arsenal, where Aubameyang isn’t only shooting from further and less centrally, but the ball is arriving from positions where assists are harder to come by. 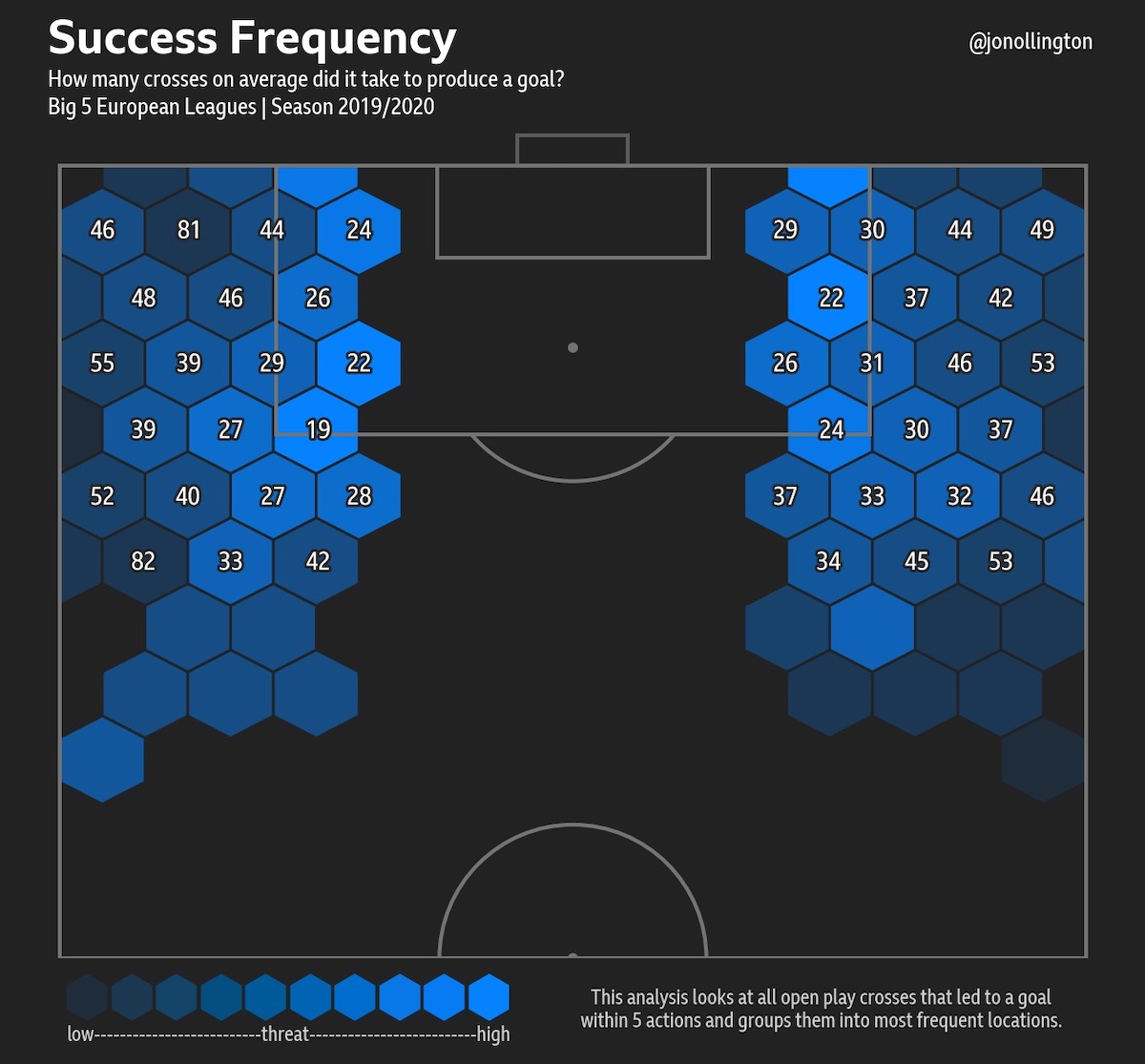 On top of that, the ball was rarely drilled in, as it was over and over again in his Dortmund or early Arsenal days, making it easier to defend. Or the pass came too late, taking away the advantage his sharp movement gives him by giving defenders an extra second to read the danger. He’s in the same positions a lot of the time but the ball isn’t arriving. And an Aubameyang who isn’t receiving regular chances is not an Aubameyang who is likely to score.

Perhaps Arsenal should’ve seen this coming, when Aubameyang still scored regularly but only because he was uncharacteristically clincical. Throughout his career, Aubameyang has not proven himself to be a forward who outperforms expected goals. He has been, to all intents and purposes, a pretty average finisher. And that’s perfectly fine; since the emergence of expected goals, it’s become clear that the true talent that sets the best apart is usually not their consistent ability to finish better than other forwards, but their ability to get on the end of chances.

It was pure finishing over-performance, though, that fueled Aubameyang’s run to to 29 goals in all competitions in 2019/20, as he has continued to find himself on the end of fewer and fewer big chances since arriving in north London.

How aware of this were Arsenal? If they weren’t, then why not? If they were, the wisdom in giving him his new contract has to be questioned. After all, what’s the point of the contract if Arsenal aren’t able to get the best out of their captain? Before this season Aubameyang had scored 195 goals in his last 274 appearances for Arsenal and Dortmund.

He has, though, become increasingly reliant on goals from the penalty spot. From the start of 2014/15 until he left Dortmund in January 2018, just 10 of his 85 league goals came from spot kicks. He averaged a non-penalty goal every 125 minutes, almost all from close range (and just one, a free-kick, from outside the box) as he established himself as one of the world’s top poachers. His 75 non-penalty goals came from shots worth 80.77 expected goals (per Understat). He never scored lots because he was a good finisher, but because he was world class at getting on the end of chances.

Since he joined Arsenal, Aubameyang has shot from further out, had lower quality chances, and accumulated lower xG.

The Premier League is a harder league than the Bundesliga and Aubameyang is in a less dominant side in England than Dortmund are in Germany, but a goal drought had arguably been on the horizon all the same.

Maybe, just maybe, there was something to cling onto against Brighton, as Aubameyang made a classic run of his, peeling to the opposite side of the pitch as Arsenal broke away before darting into the area, and he actually did receive the ball.

Of course, it didn’t go in. But he did get there and he did hit the target. More often than not, he’d find the back of the net. The shot was worth 0.61 xG (Understat), the highest of ANY Aubameyang shot in the Premier League since Arteta took over 12 months ago. Aubameyang used to get shots worth more than 0.5 xG around one every two games, but that dropped all the way to 0.14 per 90 in 2019/20 and that was the reason his expected goals dropped. The key to him scoring more regularly again lies with Arsenal finding him in these positions, as they did that once time against Brighton. If they do, he will score more often than he’ll miss. The good news is he does still possess the movement and the athleticism to get there.

Historically a slightly below average finisher, Aubameyang’s 29 goals in 2019/20 were fuelled by improved finishing. He had fewer top quality chances than ever, his expected goals dropped in turn, but his output didn’t. It was unsustainable. 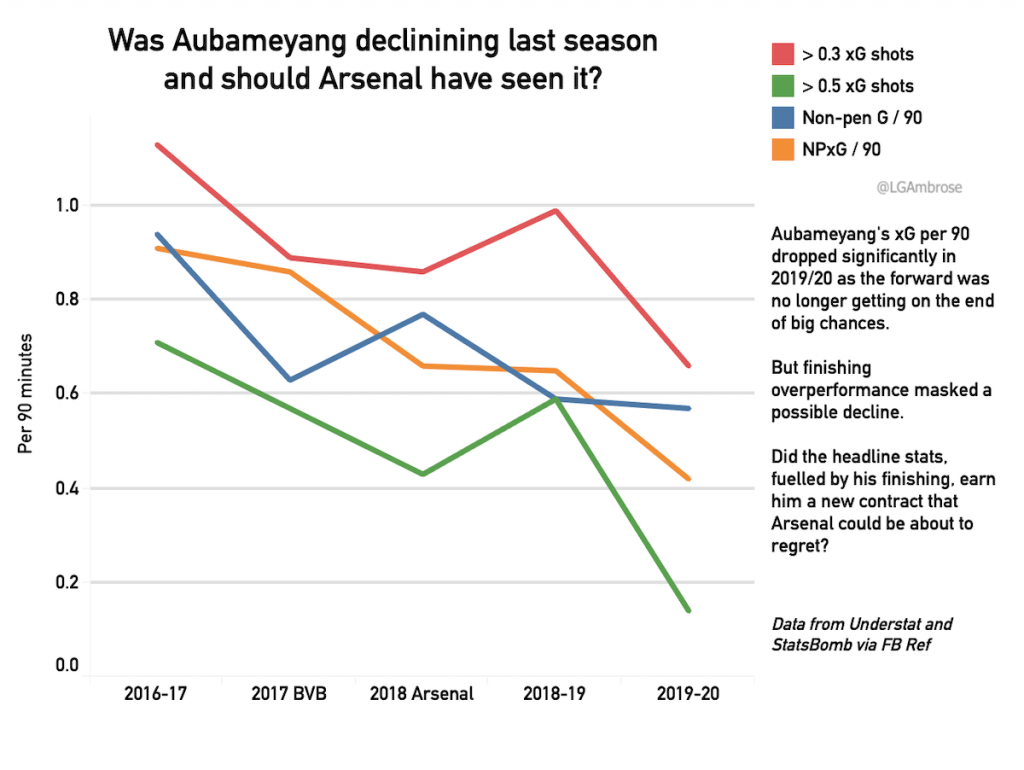 While he managed 0.55 non-penalty xG per 90 minutes in 2018/19 and scored 0.59 non-penalty goals per 90, the striker managed just 0.41 xG per 90 (Statsbomb/FB Ref) last season. Inflated by finishing overperformance, he scored 0.72 non-pen goals in the Premier League. But the underlying numbers should have set off alarm bells.

Arsenal fans were suckered into this once with Aubameyang before, when he started the 2018/19 season with an 11-game hot streak was bookended by long-range efforts against Cardiff and Spurs. He netted nine non-penalty goals, one every 87 minutes on the pitch, from just 5.22 non-penalty xG (Understat) during that run. He was fine for the remainder of the campaign, but his finishing overperformance regressed and he netted just nine more non-penalty goals in his remaining 22 Premier League appearances. As we’re seeing now as we compare his current form to last season, he isn’t a unicorn finisher who regularly makes xG look foolish, and he is always likely to regress over time.

The skill is not the finishing, it is being in the place at the right time to get so many big chances. The reason for Aubameyang’s poor season so far may mainly be that Arsenal are not finding him in those areas anymore, or when they are, he has had to try to score with his head. Maybe he has lost a bit of pace, but Arsenal’s struggles to create good chances seems like a much clearer reason for his troubles in front of goal. Or at least the extent of those troubles.

The fact is, he is still making plenty of his trademark runs (albeit, maybe not quite as quickly as he once was) but the ball doesn’t flash across the box, or at least not precisely enough or from the right areas. There are almost always defenders in the box, thanks to how slowly Arsenal have built attacks, and even when they get into these positions, they don’t find their captain.

If they want any chance of unlocking Aubameyang’s goals again (and there is a real possibility that a 31-year-old striker has simply peaked and is now on the way down) the team has to play faster, deliver the ball better, and deliver it from better areas. Do that, and he can still score plenty, and the signs are promising now that Arteta is using Emile Smith Rowe with Bukayo Saka.

But if Arsenal don’t start creating more big chances for Aubameyang again, and fail to find him when he makes he finds space, his big new contract will end up looking like a big mistake for all involved.