The trademark goal of Mikel Arteta’s early Arsenal reign, seen against Manchester City, Liverpool, Fulham, has a familiar ending. Pierre-Emerick Aubameyang lurks on the far side of the pitch, the left, before the ball arrives at his feet at the final moment. And he scores. The perfect use of Arsenal’s best goalscorer.

But is it a waste of Arsenal’s most intelligent mover? Playing Aubameyang out wide has meant another striker, namely Eddie Nketiah or Alexandre Lacazette, has started every single game since Arteta took over. Even Joe Willock, off the bench, has filled in the sort-of-false-nine-pressing role in the centre of the frontline, with Aubameyang remaining on the left.

But moving the Gabonese into the middle of the pitch against Sheffield United on Sunday allowed Arsenal to have an additional creative player on the pitch and the Gunners instantly looked more dangerous. It might sound counter-intuitive to say Arsenal could look more dangerous by taking an extra goalscorer out of the team to squeeze in a more creative player but the performance after Nicolas Pepe replaced Eddie Nketiah suggested that might just be the way forward.

Aubameyang hasn’t led the line alone in an Arsenal game since December 2019, when Freddie Ljungberg flanked him with Pepe and Gabriel Martinelli. The headline stats from his stint down the middle weren’t that impressive:

But, watching Sunday’s game back, you see that the Gabonese came to life and injected urgency into the entire team after Arteta finally gave him permission to take up the positions of a centre-forward. So I thought that, and not the shift to a four-man backline, is what I’d focus on for the final tactics column before the international break. Watching the second half again, I was exhausted just following Aubameyang on the screen. Just imagining the size of the task when it comes to marking him is making me nervous. He put on an a clinic of how a striker should move.

Here are three typical ways Aubameyang’s movement made him and Arsenal so much more dangerous, even if the Gabonese didn’t actually get any chances himself.

Always outside his marker

Much like in his role from the wing, Aubameyang loves to play off the shoulder of his marker, moving to the opposite side of the pitch from the ball. Instead of clogging up the middle and looking for the ball to feet, he immediately started his spell down the middle by looking to hang on the outsides of the opposition centre-backs.

From that position he could either offer a threat behind, having the advantage to reach a cross over the defender in question’s head, or dart across his marker unexpectedly if a space appeared. 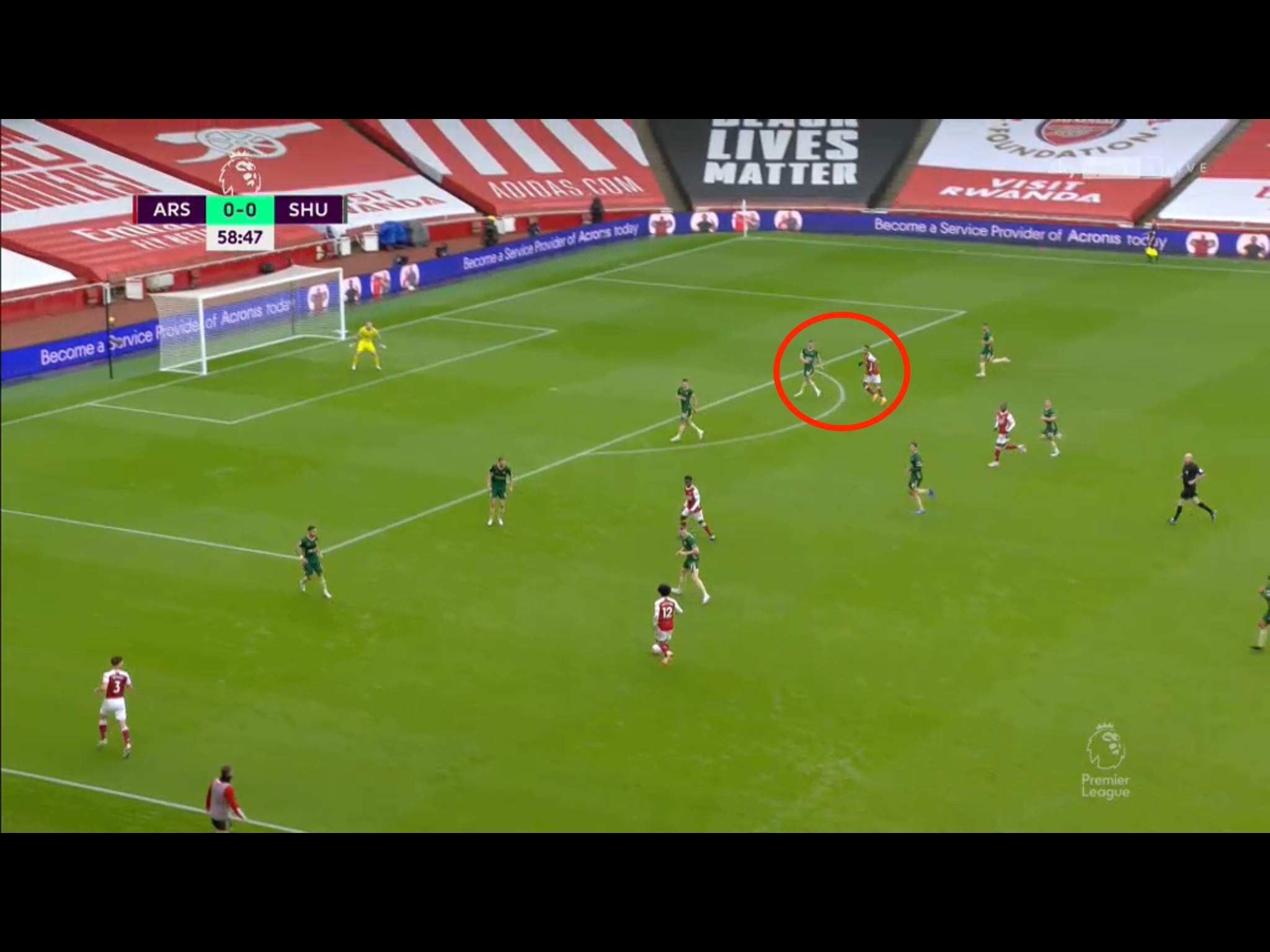 It was clearly a deliberate approach. If there’s one thing we know from Aubameyang’s goals from the left-hand side after those  sweeping moves from the back, it’s that he values having as much of the game in view as possible.

Moving around to get on the opposite side of the box from the ball, he actively worked the backline, leaving the three Sheffield United centre-backs constantly wondering if he was their responsibility or if he was taken care of by a team-mate. The ball switched, and Aubameyang made his movement in the opposite direction. 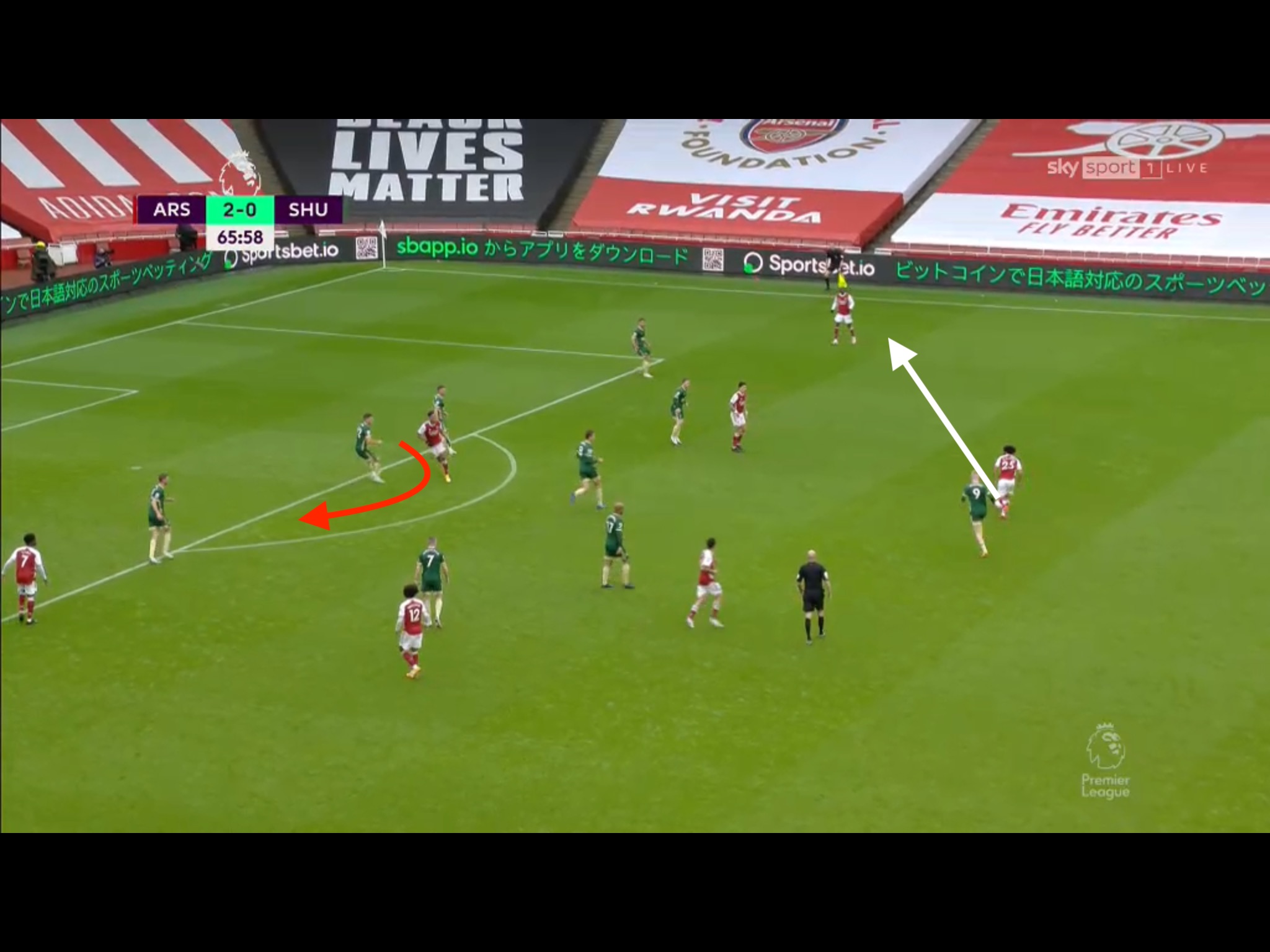 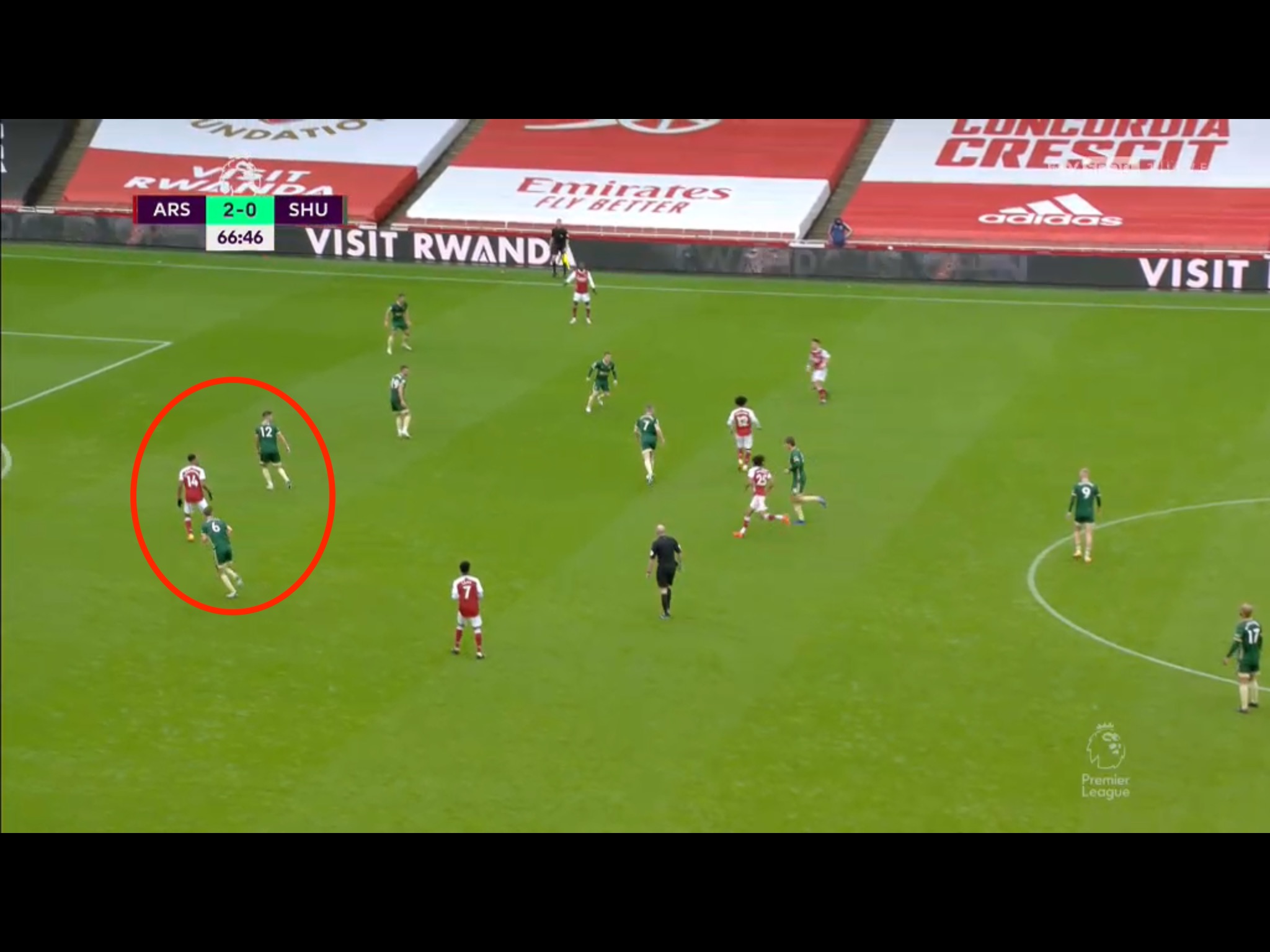 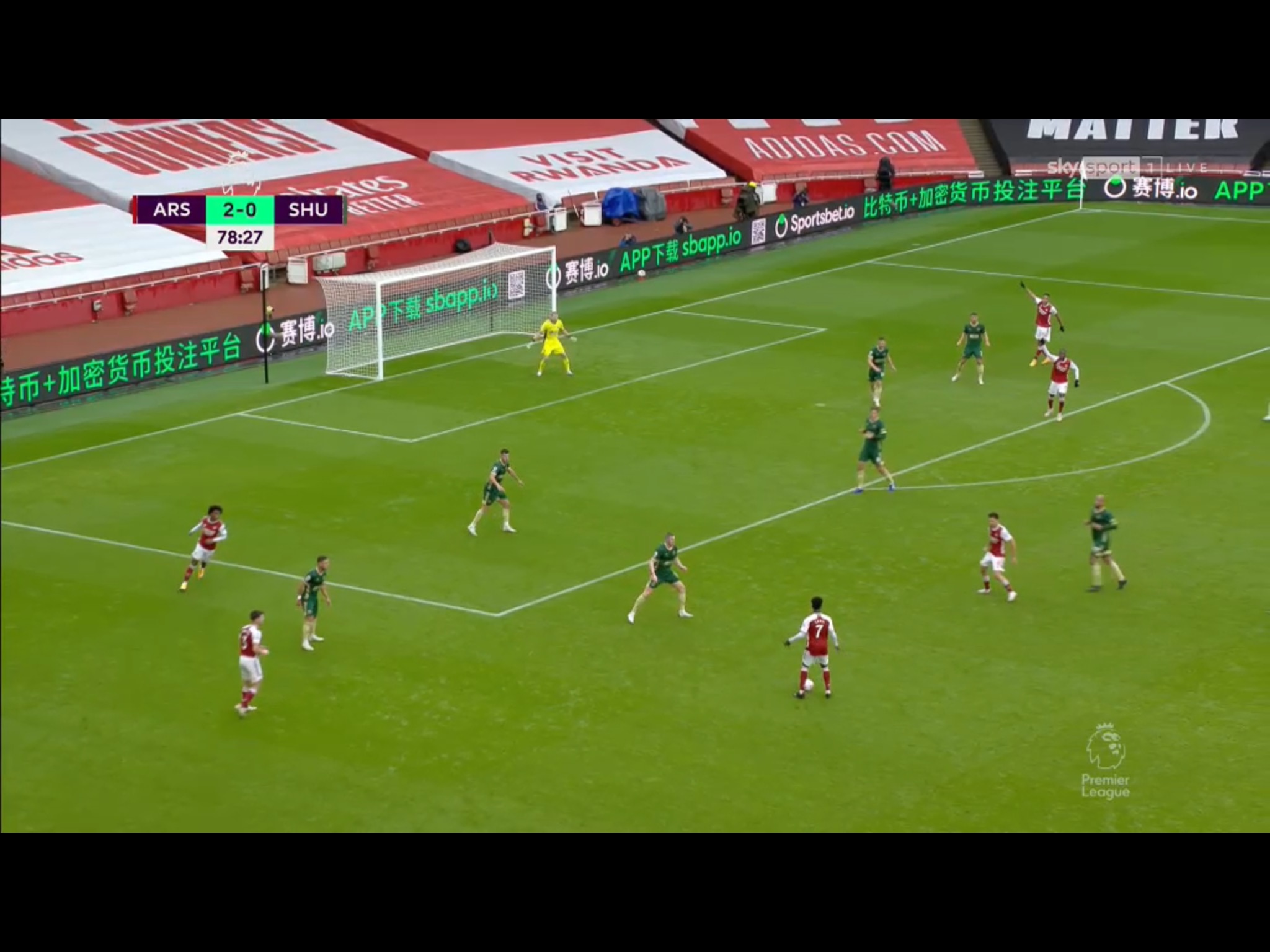 From behind his defensive counterpart, his movement could remain unpredictable. His obvious acceleration is perhaps his biggest asset and he clearly knows how to use it. In the picture above, the box is almost vacant as Aubameyang peels away. Arsenal have struggled to break down deep defences in recent times and Lacazette is more likely to be found coming towards the man in possession – Bukayo Saka in the above example – but Aubameyang’s natural preference lends itself to making the pitch as big as possible.

Moving across the pitch and away from the ball, rather than towards it, means he looks cut off from the game, but the captain’s strength isn’t his combination play (despite his involvement in the opening goal) and his movement away from the ball leaves more space for the creative players in possession. It also forces the opposition to be switched on at all times, no matter where the ball is in relation to the striker.

Aubameyang did just that for the opening goal, getting himself on the back of his marker and making a run into the six-yard box. The ball didn’t come to him. 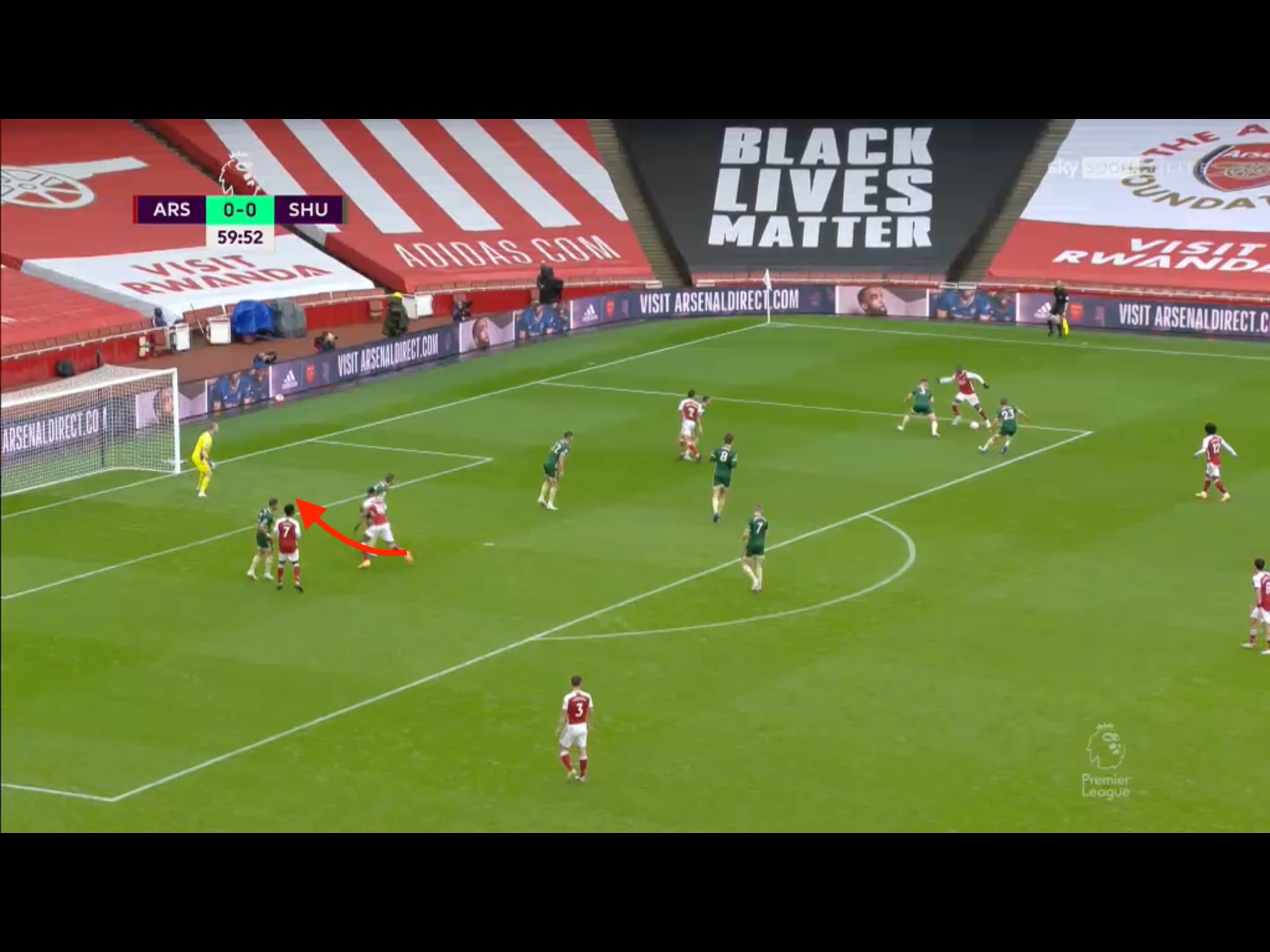 So he moved back behind his marker and waited for the next opportunity to make a run for the ball, just seven seconds later. Willian opted not to flash a ball across the box. 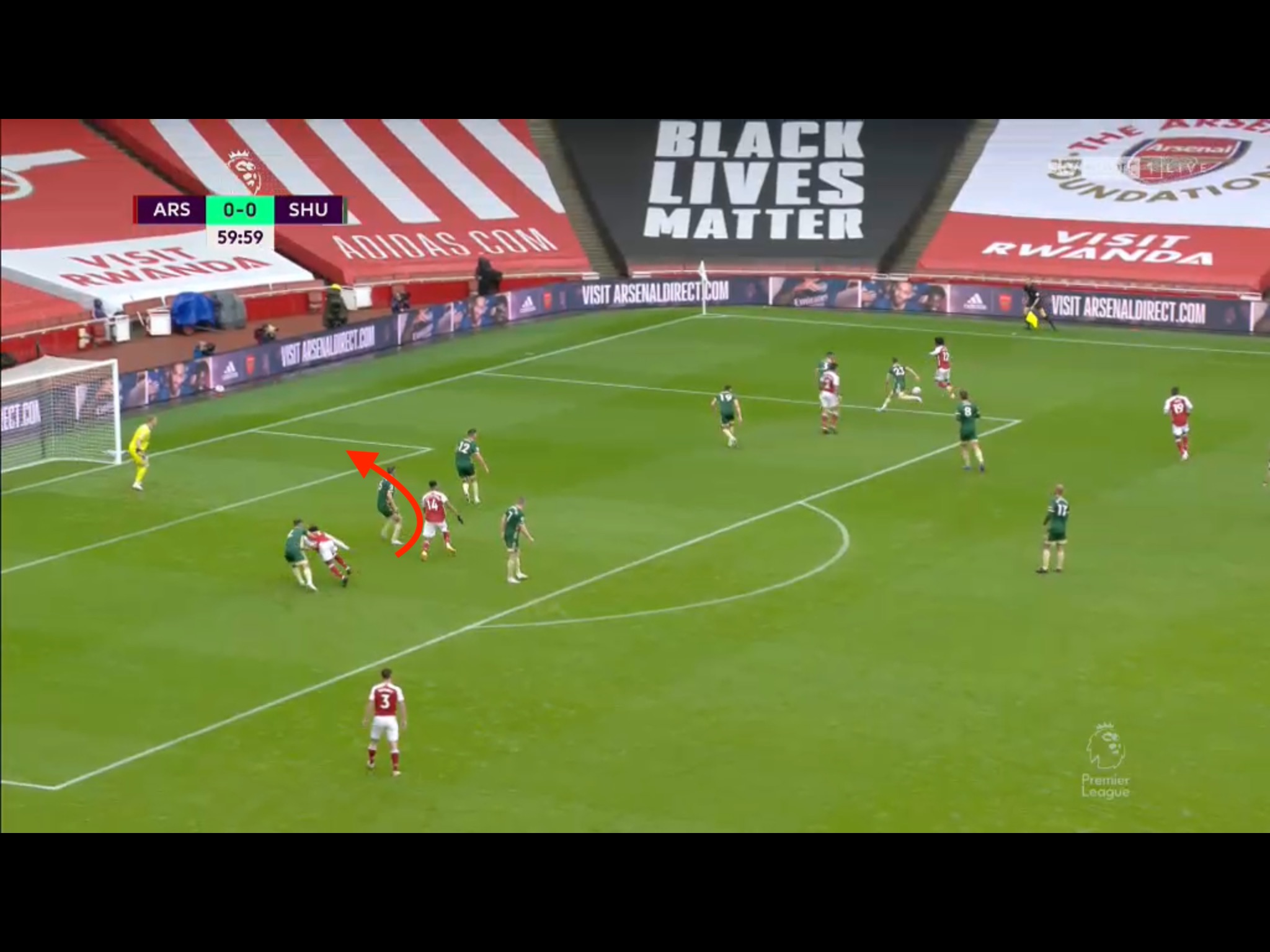 But those two runs have pushed Chris Basham onto the back foot. When Aubameyang offered Mohamed Elneny an option to feet, he wasn’t closely followed, with Basham nervously half-expecting the Gabonese to feint and make another darting run.

Instead he did receive the ball to feet and deftly played it into the path of Hector Bellerin, who assisted Saka at the back post. 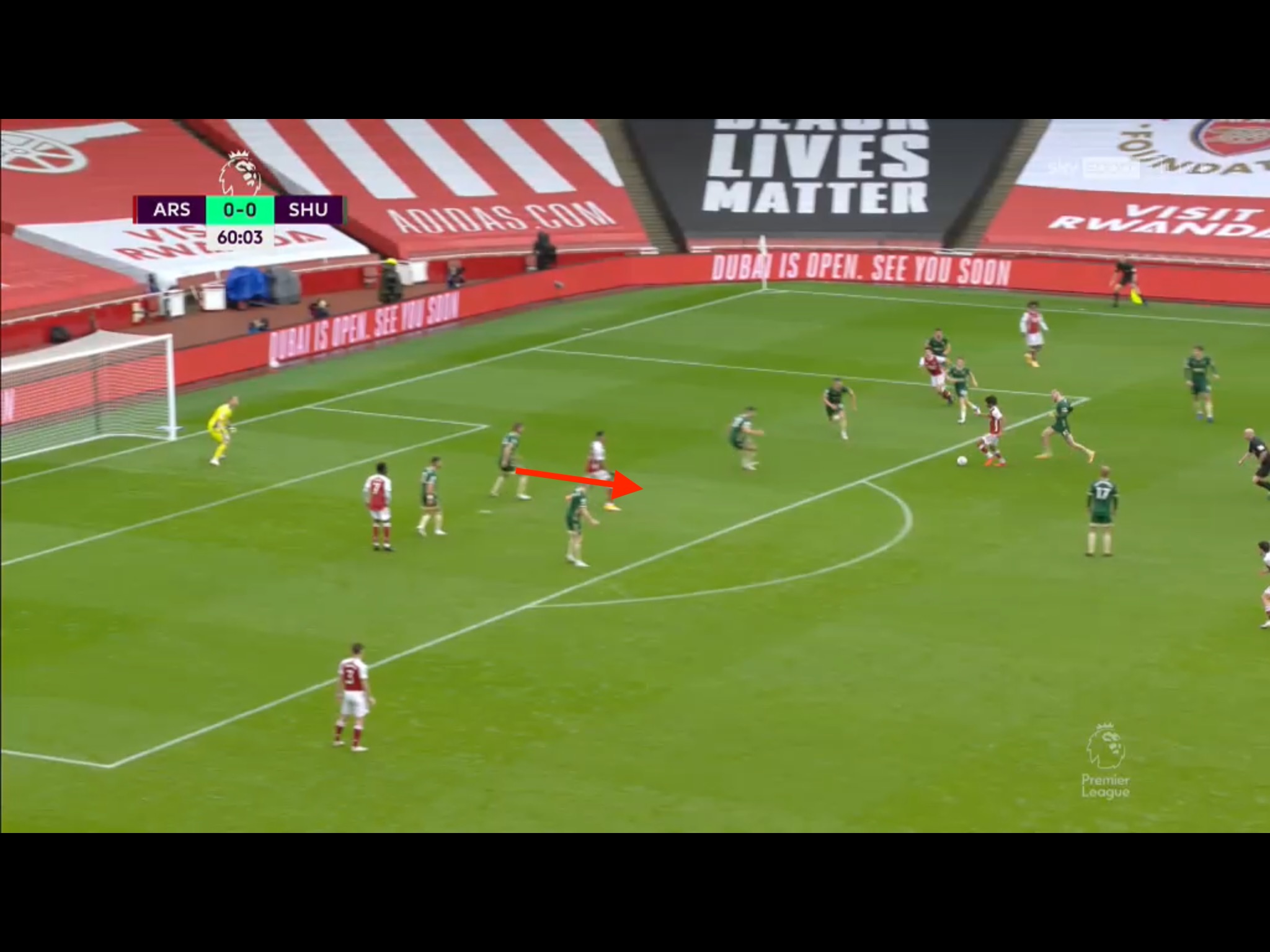 This is what constant movement can do. It exhausts defenders, especially when it’s intelligent. Most of these runs won’t lead to Aubameyang receiving the ball and he knows it. But the second a defender switches off, he’s in.

Every time it looked like the ball might go into the area, the Arsenal skipper sprung into life. Basham was lucky as this Pepe effort didn’t reach Aubameyang, making yet another run across his the defender in the box. 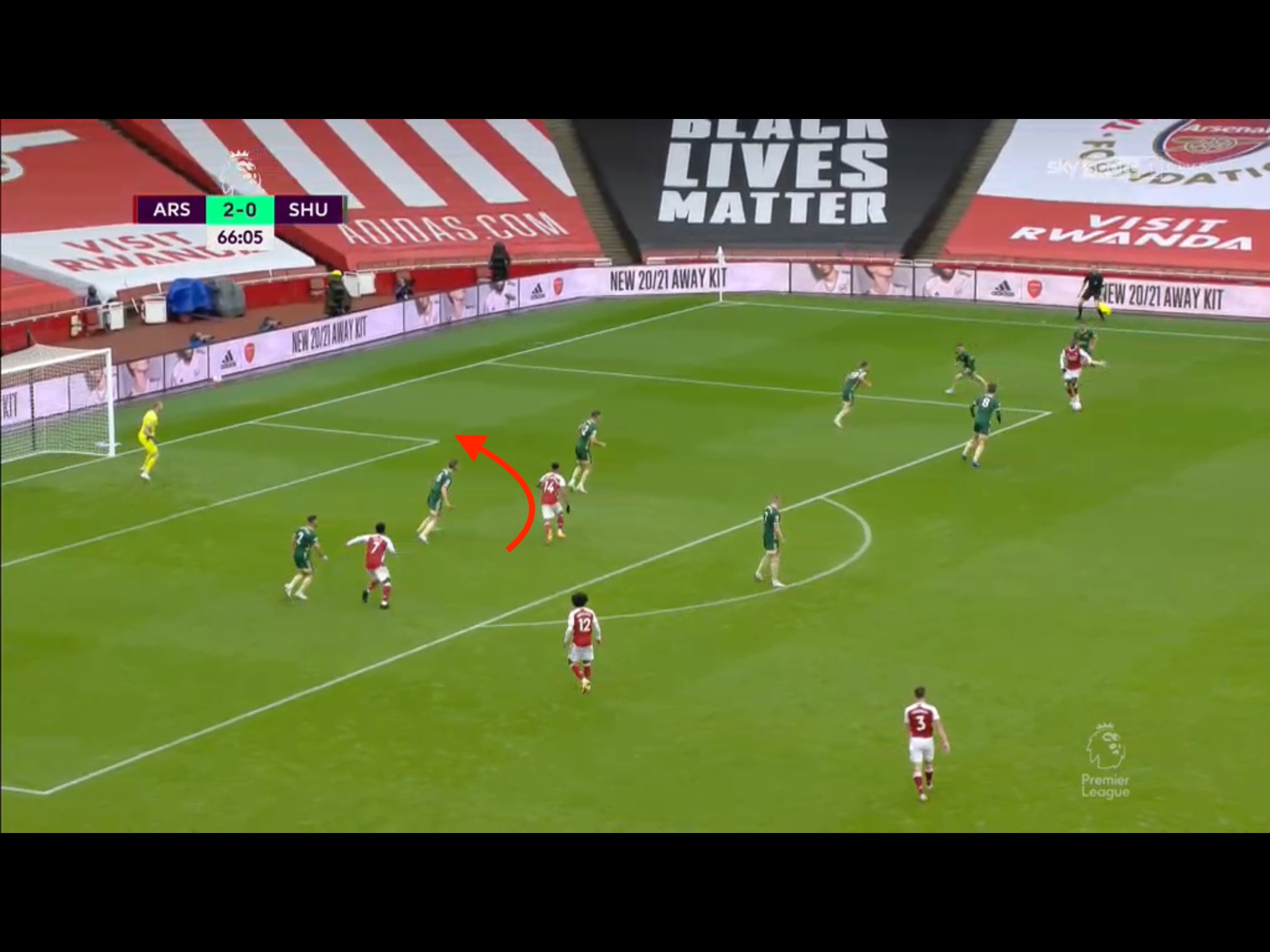 His incredible burst of acceleration and tendency to hang on the back of a defender means Aubameyang almost always has the upper hand when he does make his run. It didn’t lead to any chances on Sunday but, if he does return to this role, it surely won’t take his team-mates long to learn that the Gabonese always gambles.

His happiness to hang on the far post helps create gaps in the defence as they look to press the ball on the opposite side of the pitch and cover Arsenal’s biggest goal threat at the same time. And when those gaps appear, Aubameyang licks his lips and springs into action. 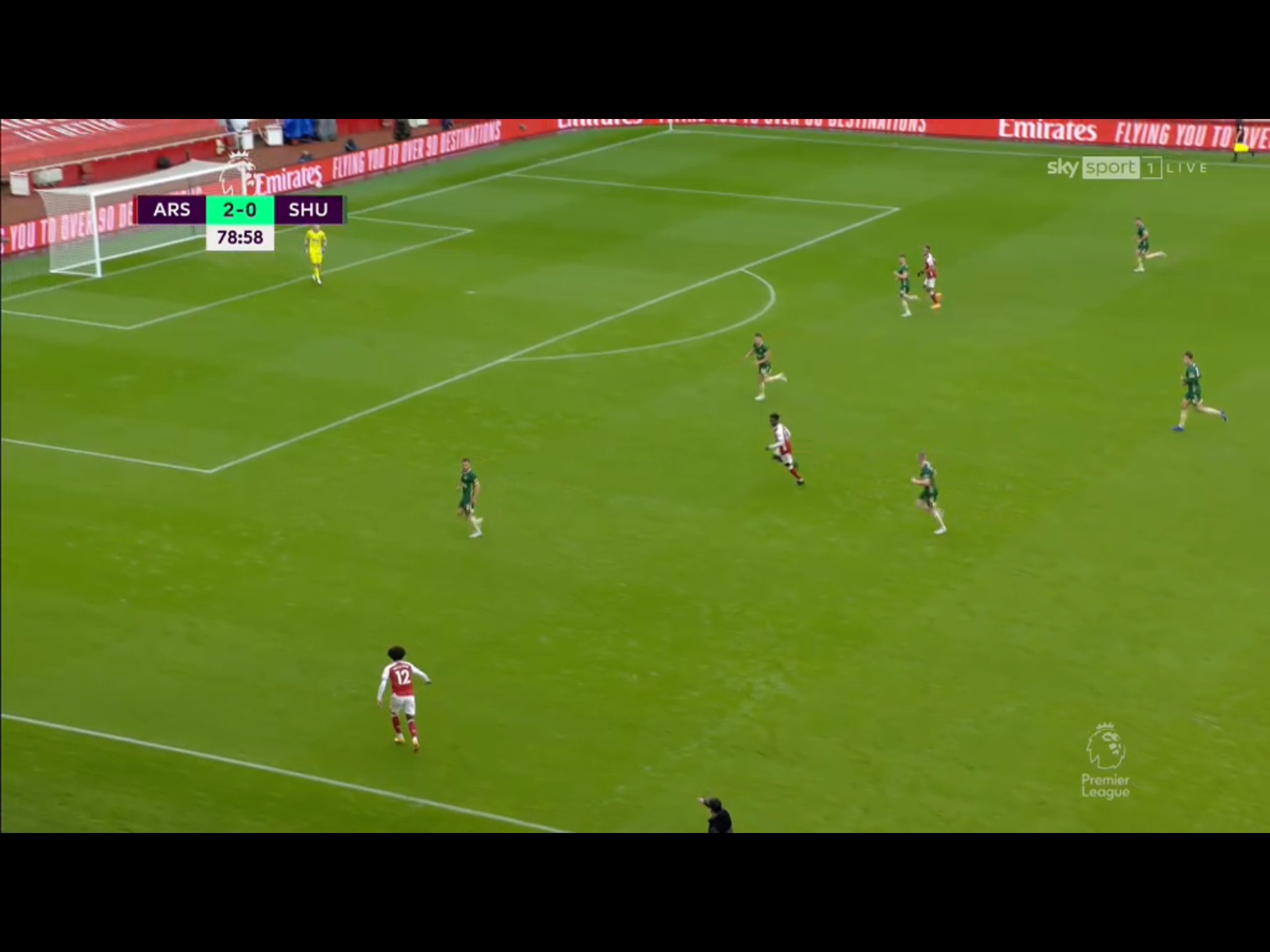 Unfortunately in this case, Willian misread the movement. He’s never, after all, played with Aubameyang in this position. 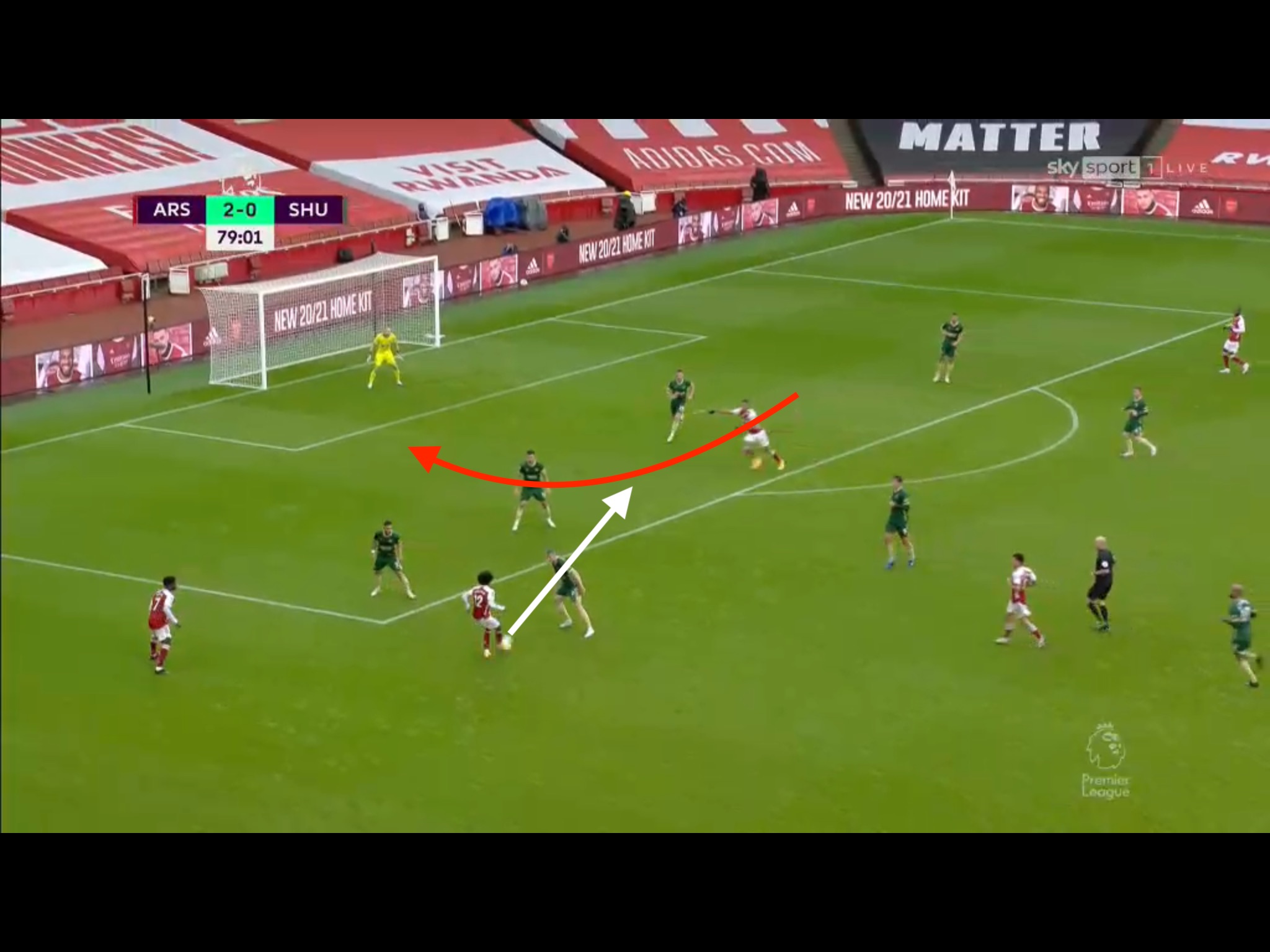 But even that doesn’t matter, because Aubameyang is alive at every moment. One run is immediately followed by another, sometimes in the space of a second, as in the below example. He will drag a defender across, hoping to receive a ball in behind. But as it goes wide instead, he’ll make a second run, behind the same defender, into the space created by his first run. And he has the speed of thought as well as the acceleration of a sprinter to make it work. 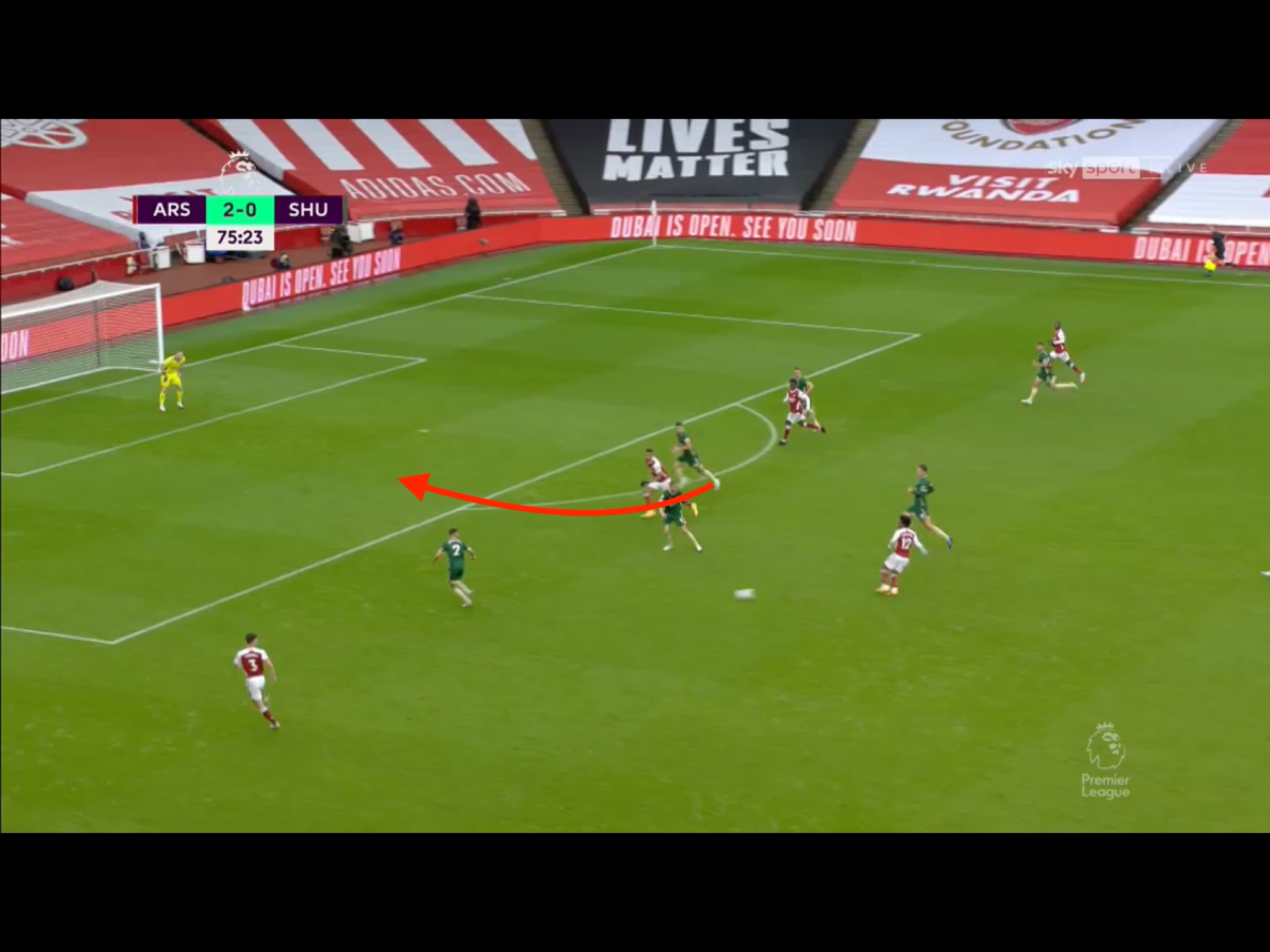 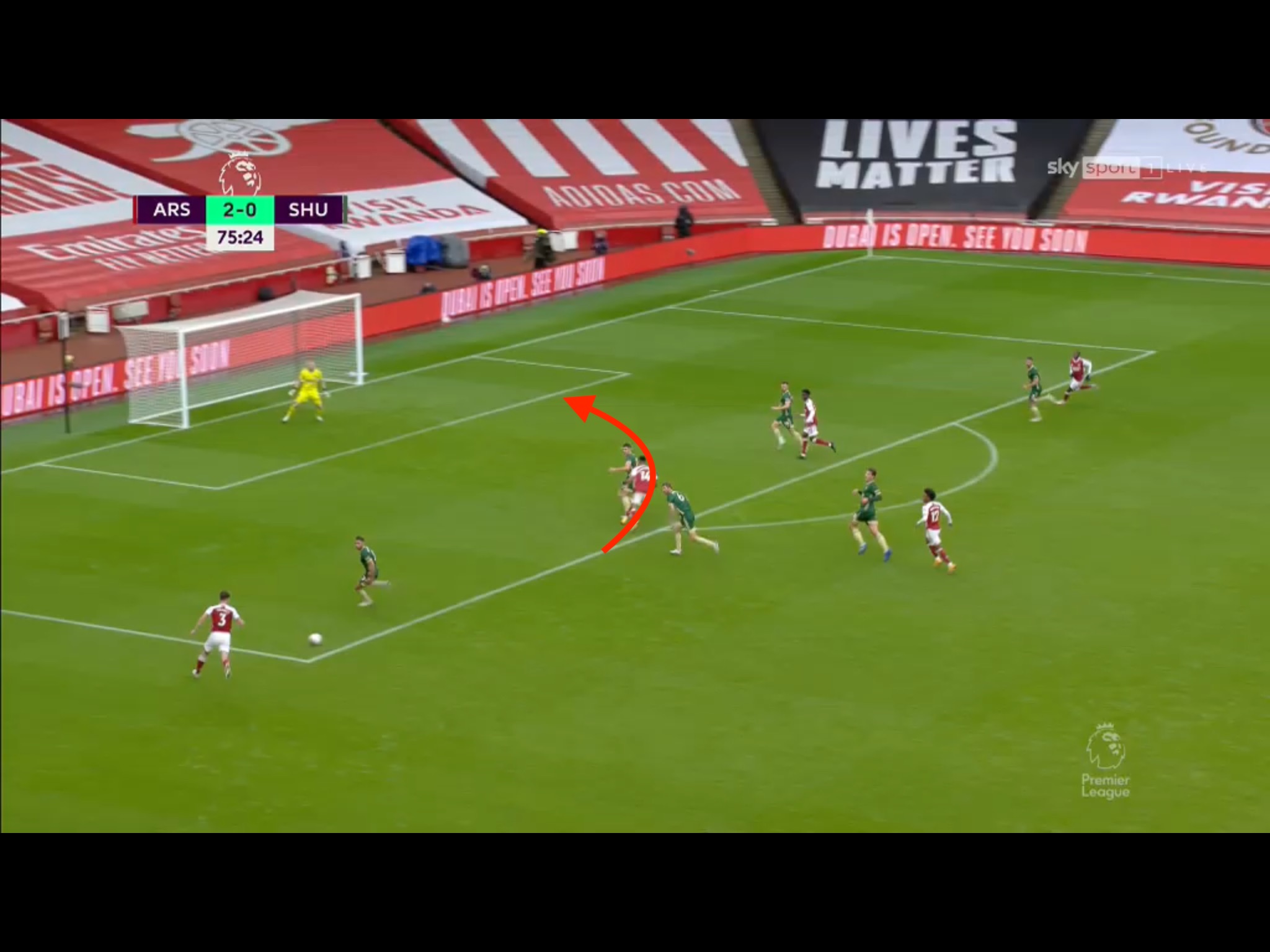 Make the pitch big and balls over the top

Watching Lacazette in particular, we’ve become used to a striker dropping into midfield. But with a three-man midfield, that isn’t quite so necessary. Aubameyang is much more likely to look to spring in behind the opposition defence.

Whenever the opportunity arose, the 31-year-old dared his team-mates to release him over the top. They didn’t find him but they aren’t used to seeing runs like this made from centre-forward. In an age where most Premier League teams push high and look to press, this could become a huge weapon for the Gunners. Either defenders drop deeper and give Arsenal more space to work the ball forward, or they push up and risk Aubameyang escaping behind their high line. 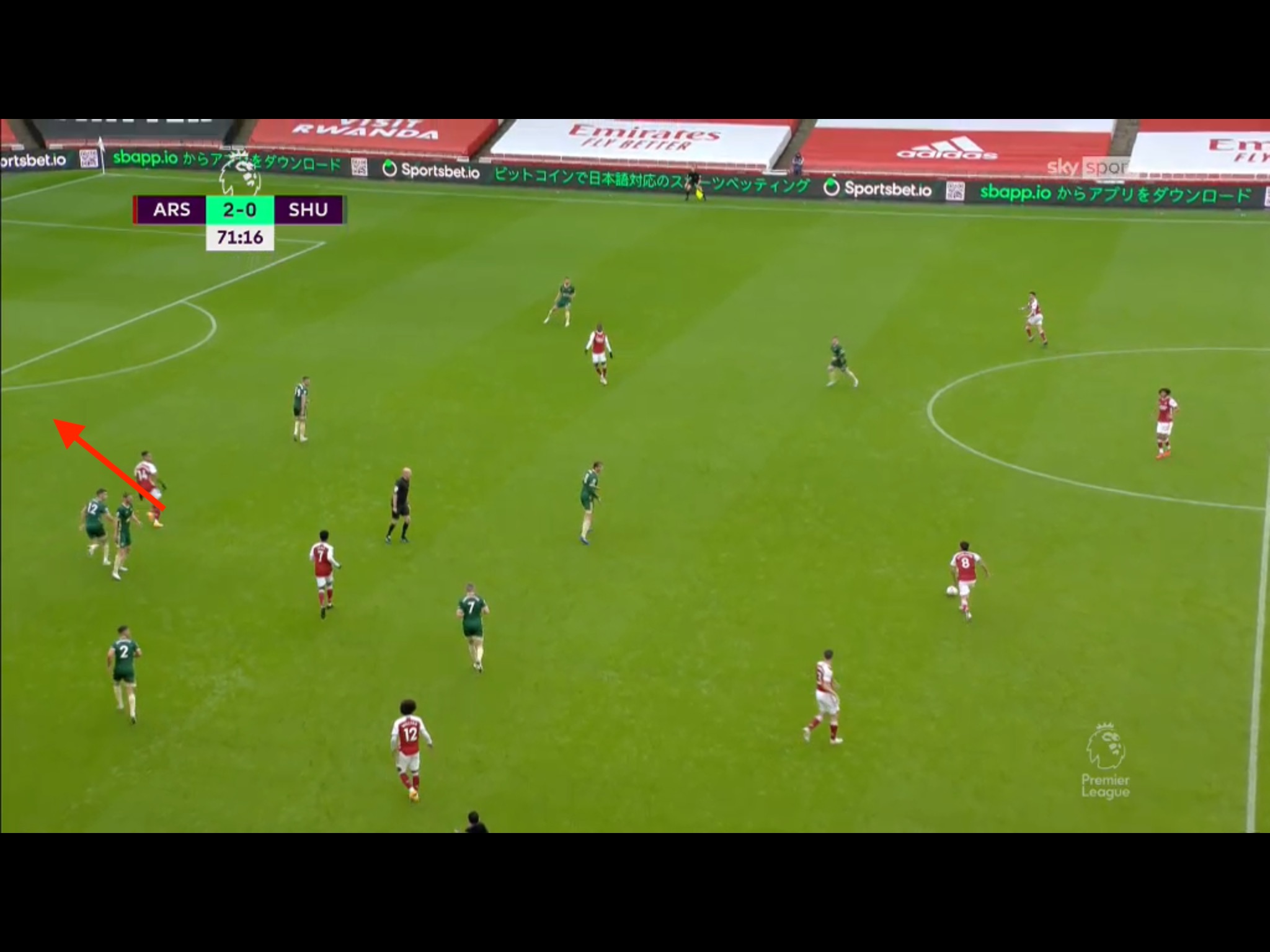 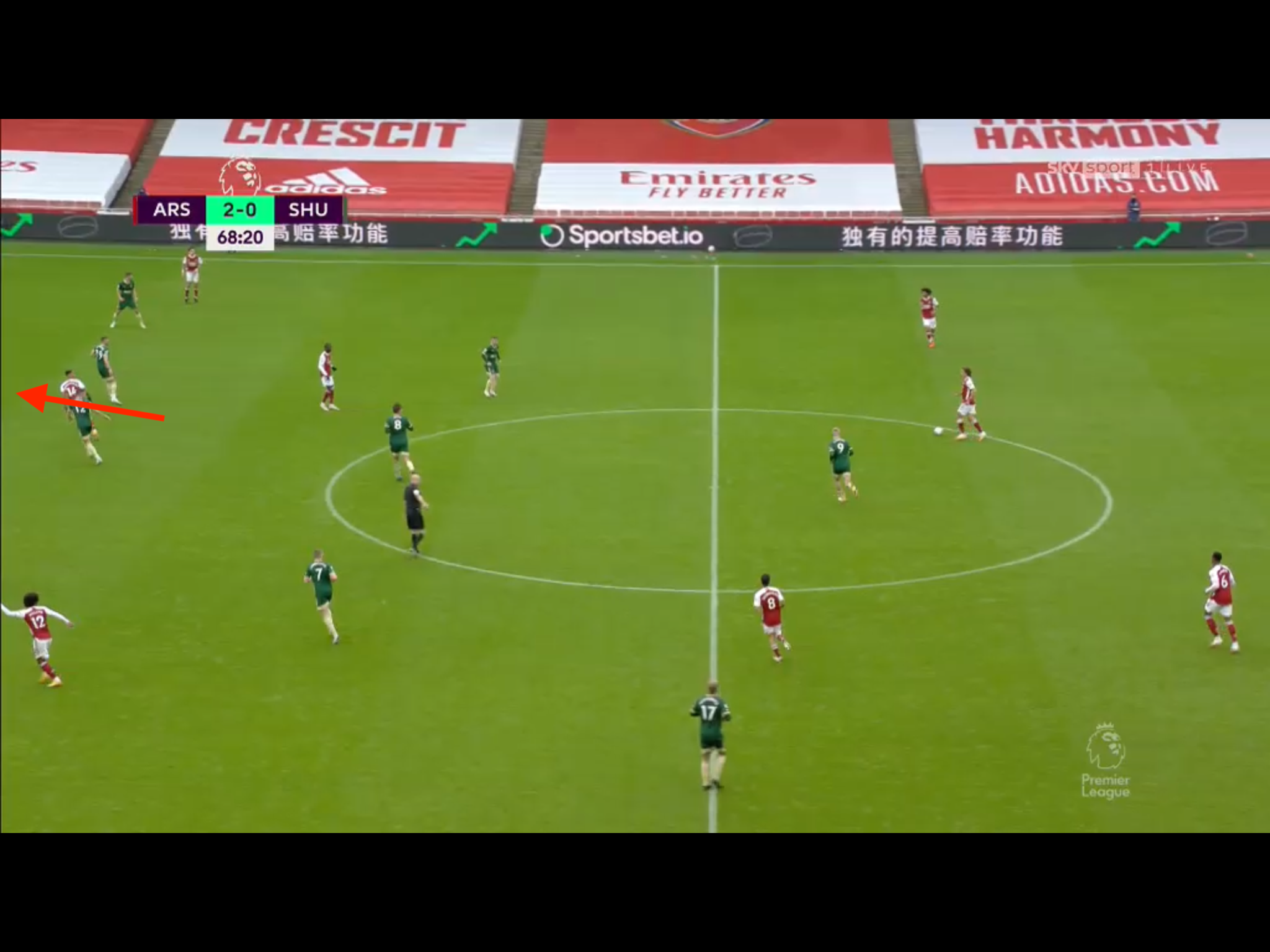 Aubameyang’s movement on the break was also completely unselfish and helped Arsenal get into dangerous positions. Rather than looking for the ball to feet, he drifted across to the flanks and threatening to make those runs behind, stretching the defence as much as possible.

Preoccupied by the striker, the defenders sped back instead of pressing the ball as Arsenal broke. Either the player on the ball or another runner from midfield could drive into the space. Arsenal’s movement on the break as a whole was improved, with players going away from the ball and spaces appearing for others to exploit. 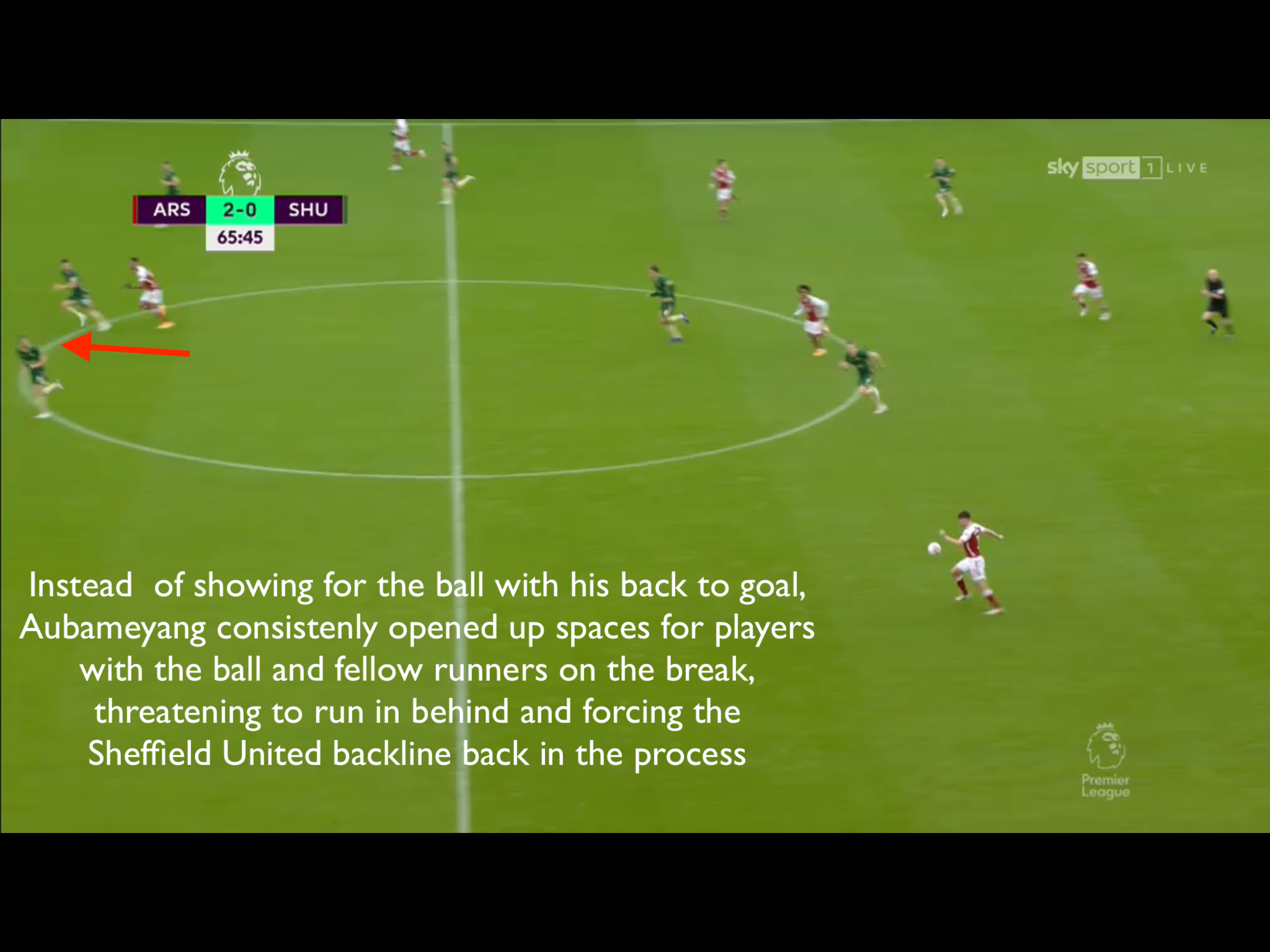 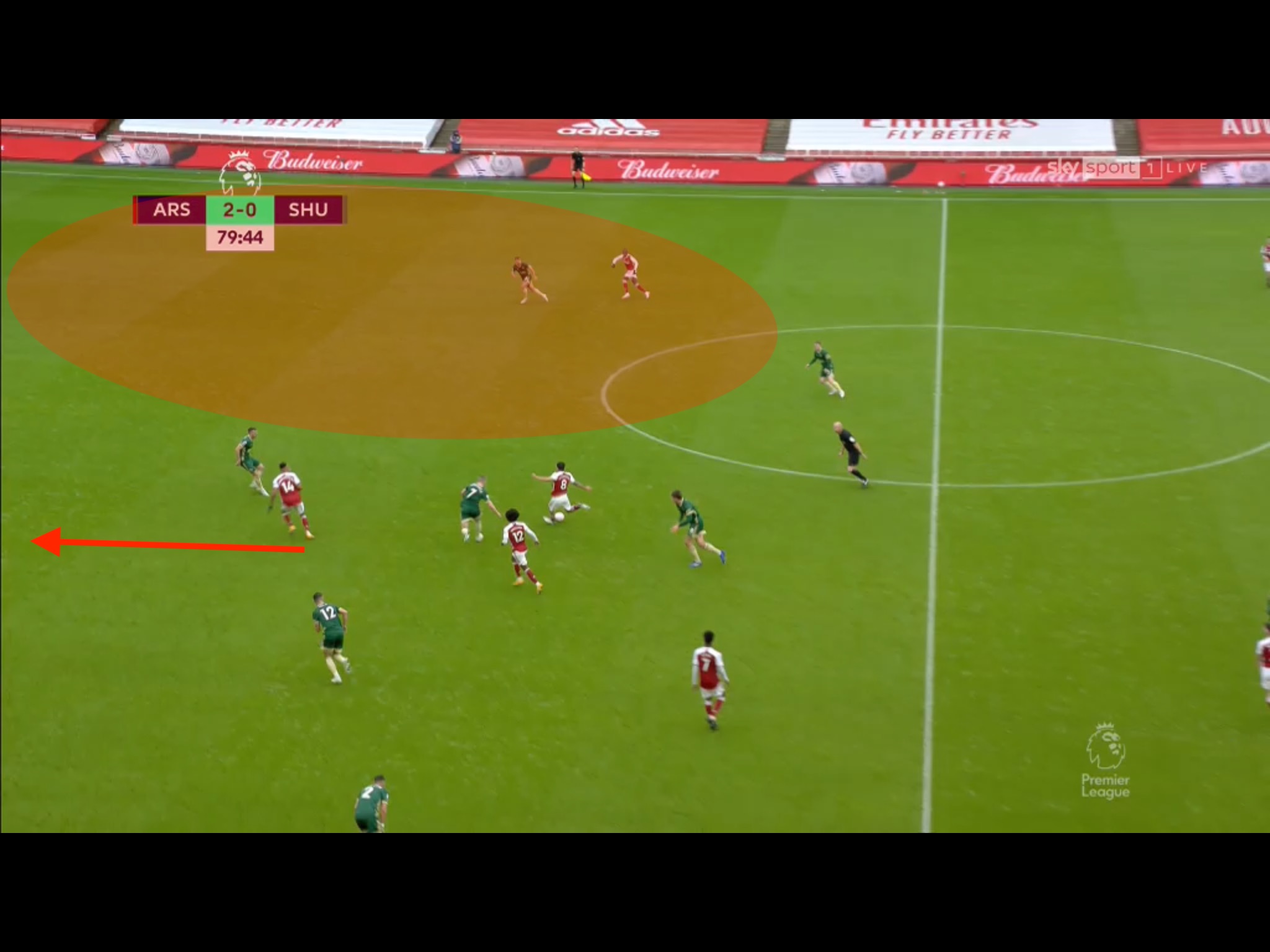 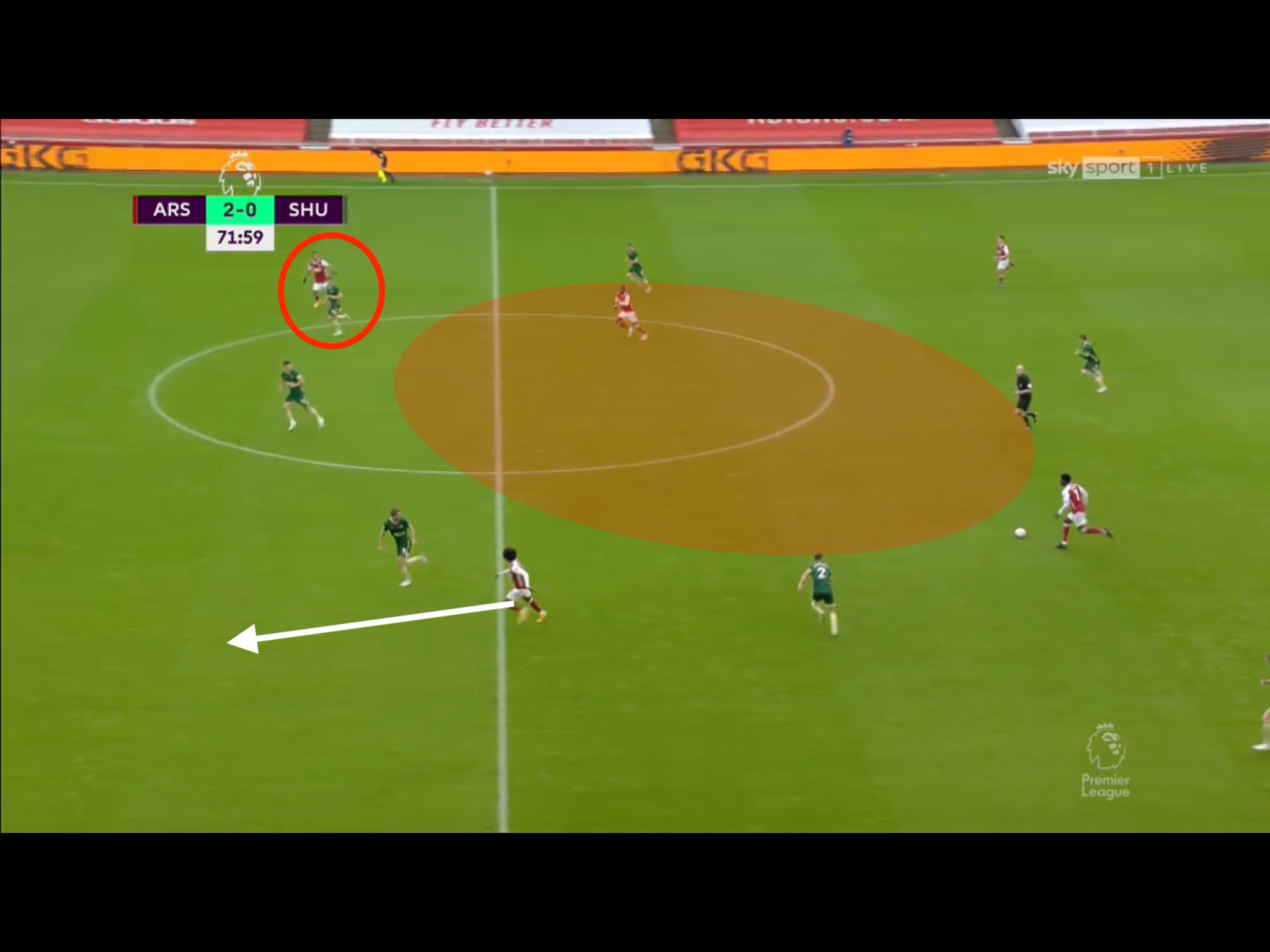 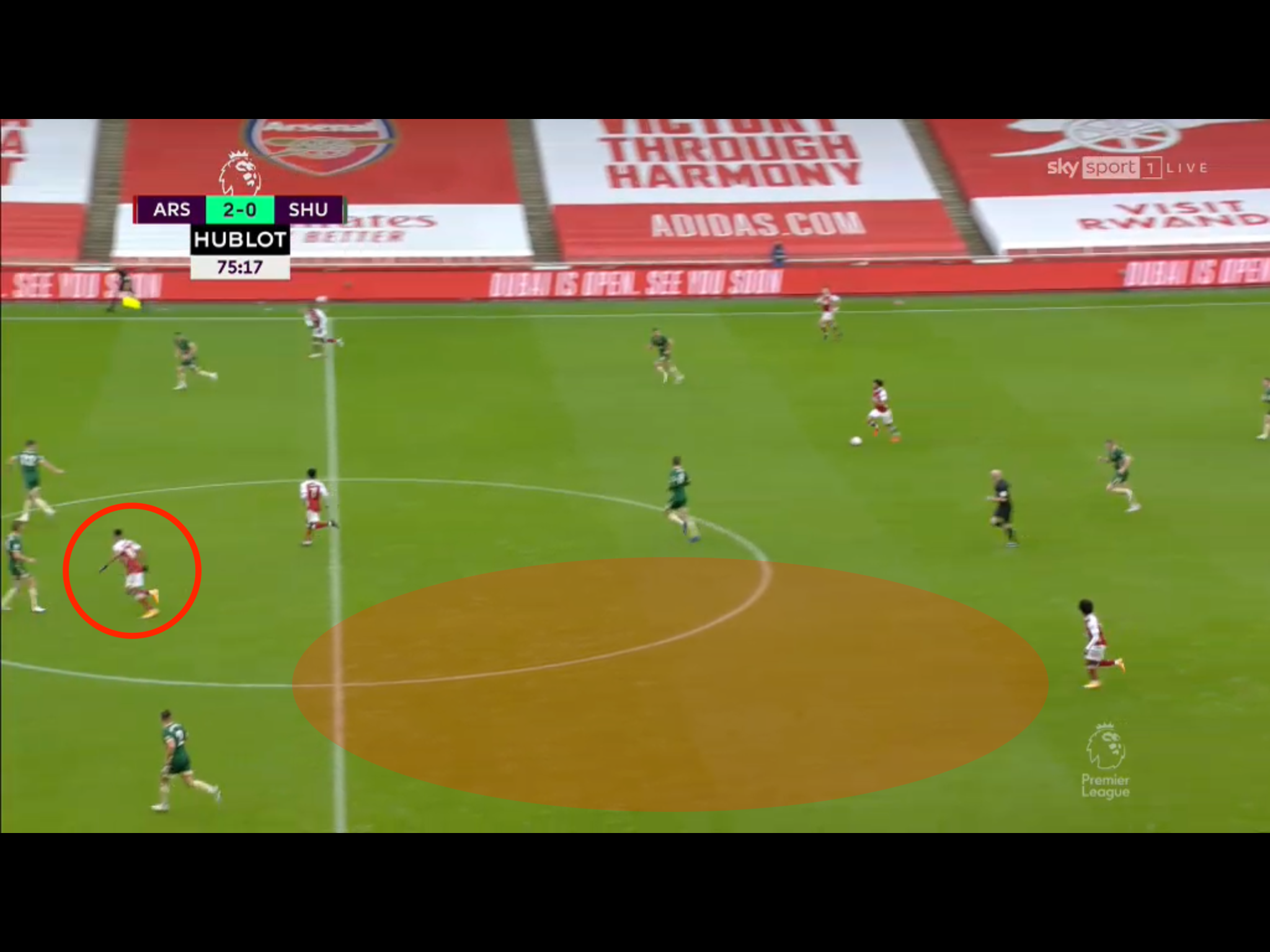 None of these passes or runs led to anything but they made Arsenal look more dangerous and offered much more variation to the attack. And it was Aubameyang’s intelligent decision to make a run away from the ball carrier that helped Pepe score the game’s second goal.

Instead of making perhaps the more obvious (and selfish) run across the defender, offering himself as an option for a slid through ball, Aubameyang made the run to the back post, dragging his marker away from the situation and leaving Pepe with a clearer sight of goal. 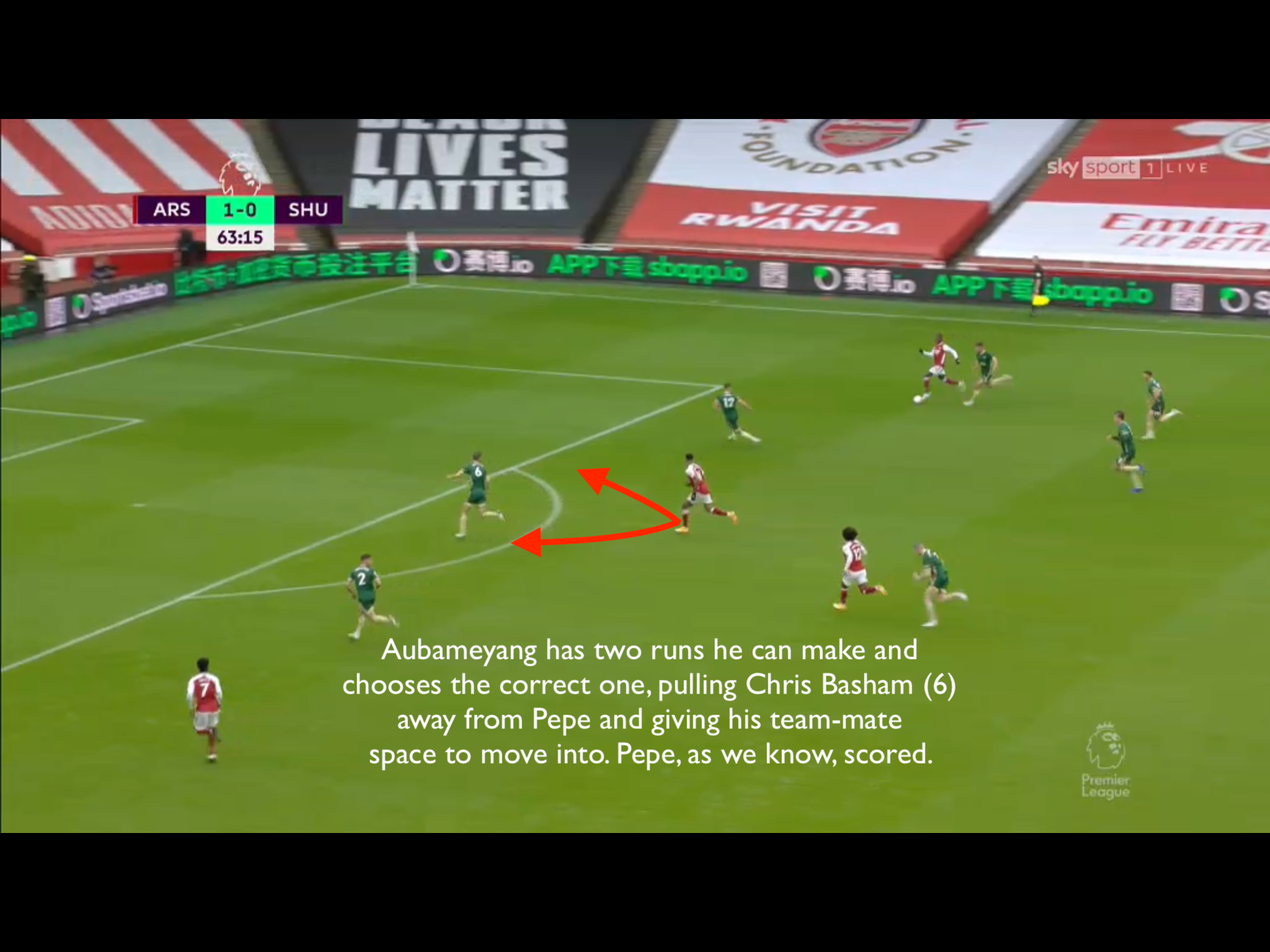 As Johan Cruyff once said, “I like to play 1 v 1, so helping me means walking away. But everyone says hey, helping means moving closer to someone.” And Pepe certainly likes to play 1 v 1.

The ‘should Aubameyang play centrally’ discussion seemed to have died down, with most fans (this one included) thinking Arteta wasn’t even willing to consider. But this performance will surely have the manager reconsidering. Aubameyang may not be fantastic with his back to goal but he’s still got enough quality to have an impact like he did for the opening goal and his movement throughout the second half proved he can be incredibly dangerous.

Arteta’s determination to have another goalscorer in this Arsenal side makes sense but Aubameyang’s movement with an additional creative player in the line-up is clearly a viable alternative method to create more chances.

With Manchester City up next, Aubameyang will likely move back out wide, with Arteta likely to move back to his tried and tested big game approach that helped Arsenal beat City and then Chelsea in the FA Cup, as well as Liverpool in the Community Shield. But, regardless of personnel, the Gunners have struggled against teams that sit deeper and sit back.

Playing the skipper down the middle could be the key to unlocking them.

Previous articlePartey, shifting to back four, and a Champions League tilt
Next articleTierney, internationals and Covid + Ozil and Sokratis set for disappointment

Changing of the Odegaard