Home Arseblog, the arsenal blog Sp*rs 2-0 Arsenal: 44 crosses on the pitch … score none 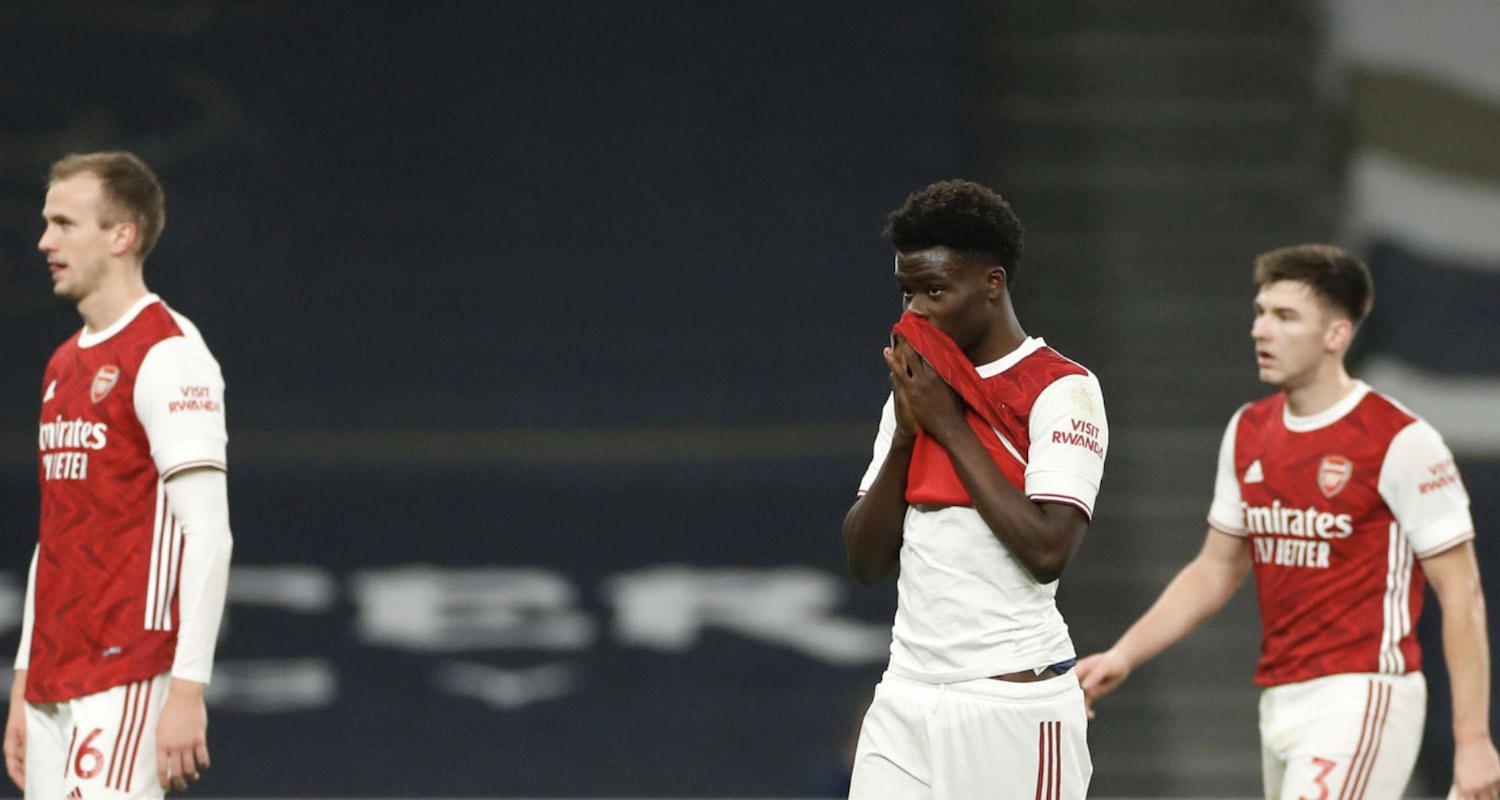 The table doesn’t lie. It might be a cliche, but it’s also quite true. Sure, there might be a little bit of fluctuation, a team doesn’t get the rub of the green here and there, but in general it’s the best measure we have of judging teams. Sp*rs beat Arsenal to go top of the table, Arsenal are 15th.

Arsenal have scored just 10 Premier League goals in 11 games. Son Heung-min scored his 10th goal of the season to put his team ahead in the 13th minute yesterday. Mikel Arteta bemoaned our lack of strike power after our worst start to a Premier League season, saying:

I watched an Arsenal team lump in hopeful cross after hopeful cross, and I suspect that even with 55 strikers on the pitch we’d struggle to score. As I said to James on the Arsecast Extra (recorded last night just after the game), a word kept popping into my head when I saw how we were playing. That word was ‘Fellaini’. That’s not good.

Another word that kept occurring to me was ‘stupid’. We have to be one of the most stupid teams in the world right now. I cannot believe for one second that a micro-manager like Arteta didn’t at least reference in passing the threat of Harry Kane and Son in his pre-game preparations. We know how dangerous they are, everyone does. Don’t let them do the stuff they do. And what do we do? We let them do that stuff.

For the first goal we over-commit in attack, Hector Bellerin’s cross is poor, nobody is close enough to Kane when they break and nobody takes him out the way he should have been taken out. The ball to Son sends him hurtling towards our goal in acres of space, and the defending is bad. Rob Holding backs off, more concerned about the runner outside him. At some point he had to engage the man. Bellerin tries to get back but slips. Willian’s attempts to catch-up are like a stiff-legged old dog that has stopped to smell something interesting, looks up and sees his owners are miles ahead of him. The finish from Son is superb, can’t take anything away from that, but having had a decent-ish start to the game, we fell into the trap.

It’s like someone telling you “Don’t push that button, you’ll get a punch in the face”, but at the first opportunity you get you push it. Don’t complain about your bloody nose.

For the second goal there’s some slight mitigation in that Thomas Partey gets injured making a tackle and, perhaps out of pain, discomfort, disappointment, or whatever, he looks to get off the pitch just as another over-committed Arsenal attack breaks down in their box. Granit Xhaka isn’t to know that his midfield partner has also broken down, but nor is he aware of the two Sp*rs players he leaves free in midfield as he ambles towards their box in the hope of the ball breaking to him so he can whack it over the bar.

Even with Partey, they have a 5 on 3 situation. Just before half-time.

Arteta’s panicked attempt to push the Ghanaian back onto the pitch are a microcosm of where we are. I kind of understand it from his point of view, because he could see what was about to unfold, and I think the player should have stayed on and done something. Anything. Take a yellow with a foul then sit down. It’s so strange to see an experienced international do what he did, but I guess he was hurt/despondent and wasn’t thinking as clearly as he might have.

The decision to play him is one which obviously backfired. Hindsight is 20/20 and all that, and while some of it may have come from Partey himself who was ‘pushing’ to be involved according to Arteta this week, ultimately it rests with the manager. I think we can all understand his desire to have the former Atletico Madrid man on the pitch for a derby, and I suspect our need for a win played a part in that too, but I’d question the choice of partner. Sp*rs basically put Lo Celso on him, and with Xhaka dropping deep into the backline, as he does (and could well be instructed to do in fairness), it left him with a lot of running to do as our one-man midfield. Would Mohamed Elneny not have been a more sensible option, given his stamina, energy and ability to cover ground?

So, 2-0 down at the break and that was that. I had zero confidence that we could turn it around, and I’m sure Jose Mourinho had 100% confidence in that too. You might point to the second half as a positive one in which Arsenal dominated, had all the possession and territory, and just couldn’t find the goals, but they let us play like that. They wanted us to play like that. They had about as much interest in having the ball as I do in watching Willian play for us which, I can tell you, is not a lot. That dominance was not because we were brilliant, it’s because Sp*rs allowed it.

I know that when a team sits deep, blocks off the middle of the pitch, and your main area of attack is down the sides, it inevitably leads to more crosses than you might like, but we stuck 44 of them into the Sp*rs box yesterday, and bar one or two which created a vague threat, it was meat and drink to their defenders. There was little or no variety, almost no genuine creativity, and for all our possession we never really looked like scoring. I think Lloris had one save to make, maybe two, from Lacazette who at least looked like he gave a shit. However, that he was playing the kind-of ’10’ role speaks volumes about the way this squad has been constructed and how the team is selected.

Extraordinary. In a bad way. I’ve worried about this for a while. We cannot turn the screw, we cannot pile on the pressure, which is really concerning in general, but even more so when you’re a team which needs second half goals as often as we do. Arteta’s subs play a part too.

Ainsley Maitland-Niles had a great game in midfield during the week, albeit against Rapid Vienna, but with 20 minutes to go and your team in need of a goal, can you not at least try him there? Would he bring less to the side than Xhaka? Where was Reiss Nelson? Not even on the bench (there was no report of an injury like last time this happened). I understand the need to have central midfield cover for Partey whose injury-status had to be taken into account, but with Maitland-Niles, Ceballos and Elneny, was there a need for Joe Willock on the bench too? I like Joe, but I’d have paid good money for another attacking option so we could haul off Willian and see someone else have a try. Maybe it wouldn’t have been much better, but it’d show you’re trying. Leaving a somewhat battered Bukayo Saka to play right back isn’t joined up thinking.

I thought Geoff Shreeves asked Arteta a very pertinent question afterwards. The manager said, “At the end of the day, we created enough situations today to score goals”, but the question was if we were creating enough good chances. Just lashing crosses into the box isn’t chance creation, it’s not creativity. Between that, the strange Tierney ‘long’ throw tactic (they’re not long enough unfortunately), and a growing reliance/hope that set-pieces might bring us a goal, this isn’t the kind of football that we should be playing. This is the kind of football we had to cope with from a defensive point of view when we used to be able to play.

I mean, if we had forwards who were renowned for their aerial presence you could see some justification for it, even if you didn’t like it, but we don’t so it makes almost no sense beyond a Hail Mary hope that something might happen. Aubameyang looks a shadow of himself, and I don’t believe it’s the contract. The idea that somehow the extra bit of money he got to add to the massive amount of money he already got anyway has seen him to decide to put his feet up doesn’t make any sense to me.

On Sky during the game they spoke about the teams being even but Son and Kane as ‘world class’ forwards were the difference, and I couldn’t help think that we have one of our own whose dip in form has coincided with the team’s dip in form, but he’s better than this. He has his own responsibility for his performances, and I think he should have done better with a header yesterday, but 3 of his 77 Arsenal goals have come with his head, so if all of a sudden we’re expecting him to nod them home like Heady McHeadface, I can understand why he might be feeling a bit unhappy with the service he’s getting.

Basically, we can’t keep playing like this if we have any expectation of winning games. We face Burnley next in the Premier League. I can guarantee you they’ll relish 90 minutes of half-arsed Arsenal crossing for their big lumpen centre-halves and centre-forwards to head away while our 5’10 lads jump half-heartedly in the vague direction of the ball.

There are obviously questions about Arteta and the pressure he’s under, but as I’m heading towards 2000 words in this piece, they can wait for another day. It’s something James and I discuss at length in the podcast (listen below), and it merits that discussion, but I’ll say this: we’re in a worrying situation because even if you decide that’s it, who is picking the next guy? Edu? You’ll forgive me if I don’t have a lot of confidence in that.

I think there are structural issues which have to be addressed, and in the last few months the consolidation of football power in Arteta and a Technical Director over whom there are serious question marks (for me at least due to his connection with the former Director of Football and his big agent friend who was part of the great Willian shambles), is concerning. We have basically two football people at executive level, and no oversight on either of them. That’s not healthy.

I don’t see this football club making any kind of change, so change has to come from the man in situ. He has to start producing results because what this is, whatever has become of us in terms of style/approach and so on, it’s very obviously not working. We did ourselves some genuine damage yesterday, and this run has damaged Arteta’s standing too. It remains to be seen if this is something that can be stitched up and fixed, or if the wounds are too severe to recover from.

Sad times. Check out the pod below.

Villarreal 2-1 Arsenal: Gunners get lucky as Arteta gets it all wrong