Arsenal spent Saturday and Sunday evening top of the Premier League table after a fine opening day win at Fulham.

Mikel Arteta’s side lined up with the now customary back three/five but an incredible amount of flexibility, especially from Ainsley Maitland-Niles, meant the formation changed from 3-4-3 to 4-3-3 (or 4-2-3-1) seamlessly. It’s becoming increasingly pointless to try and nail the Arsenal XI in one particular, easy to digest formation. The shape of the team chopped and changed throughout as players moved from set positions to either build up against Fulham’s press or attack in the final third. 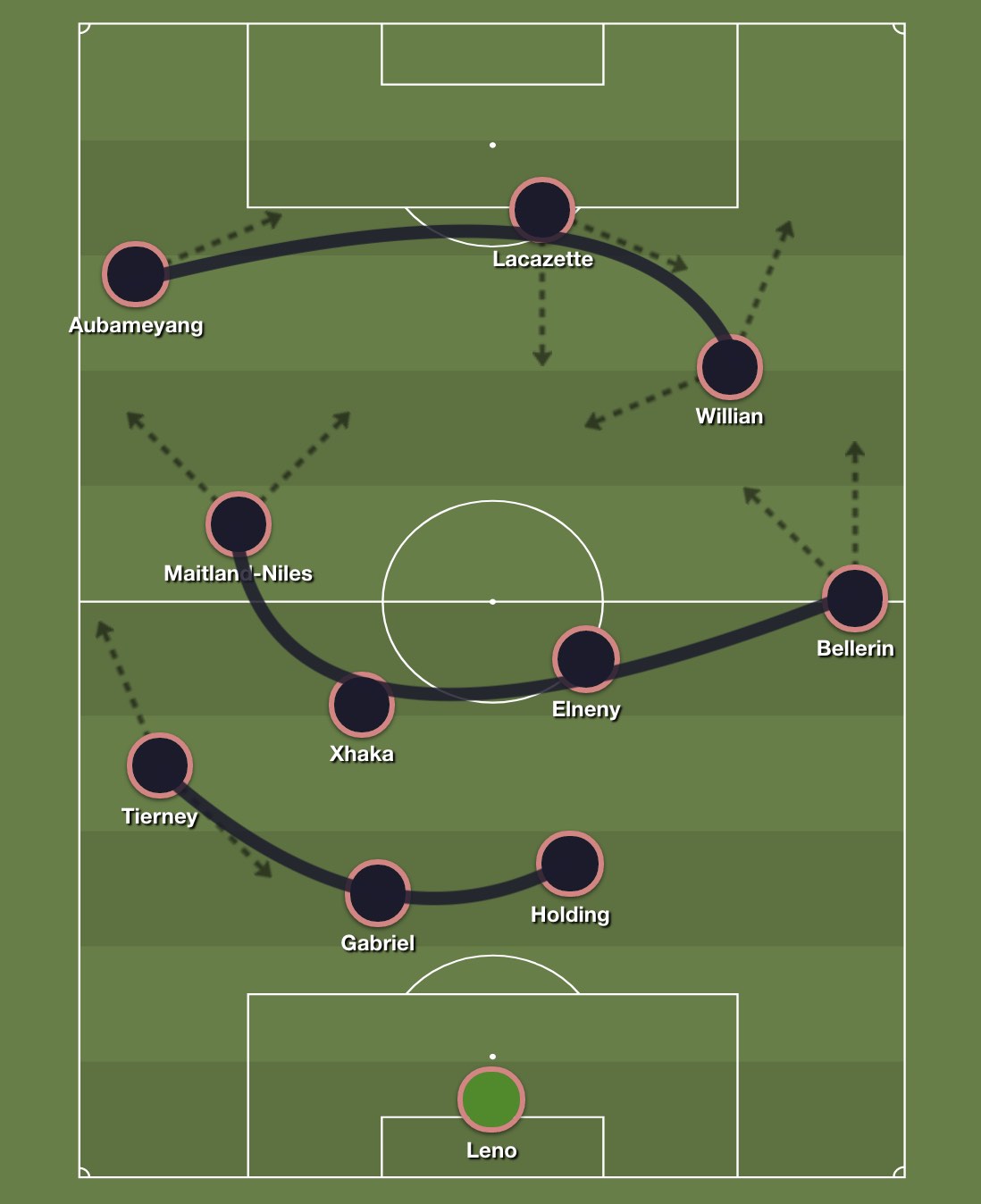 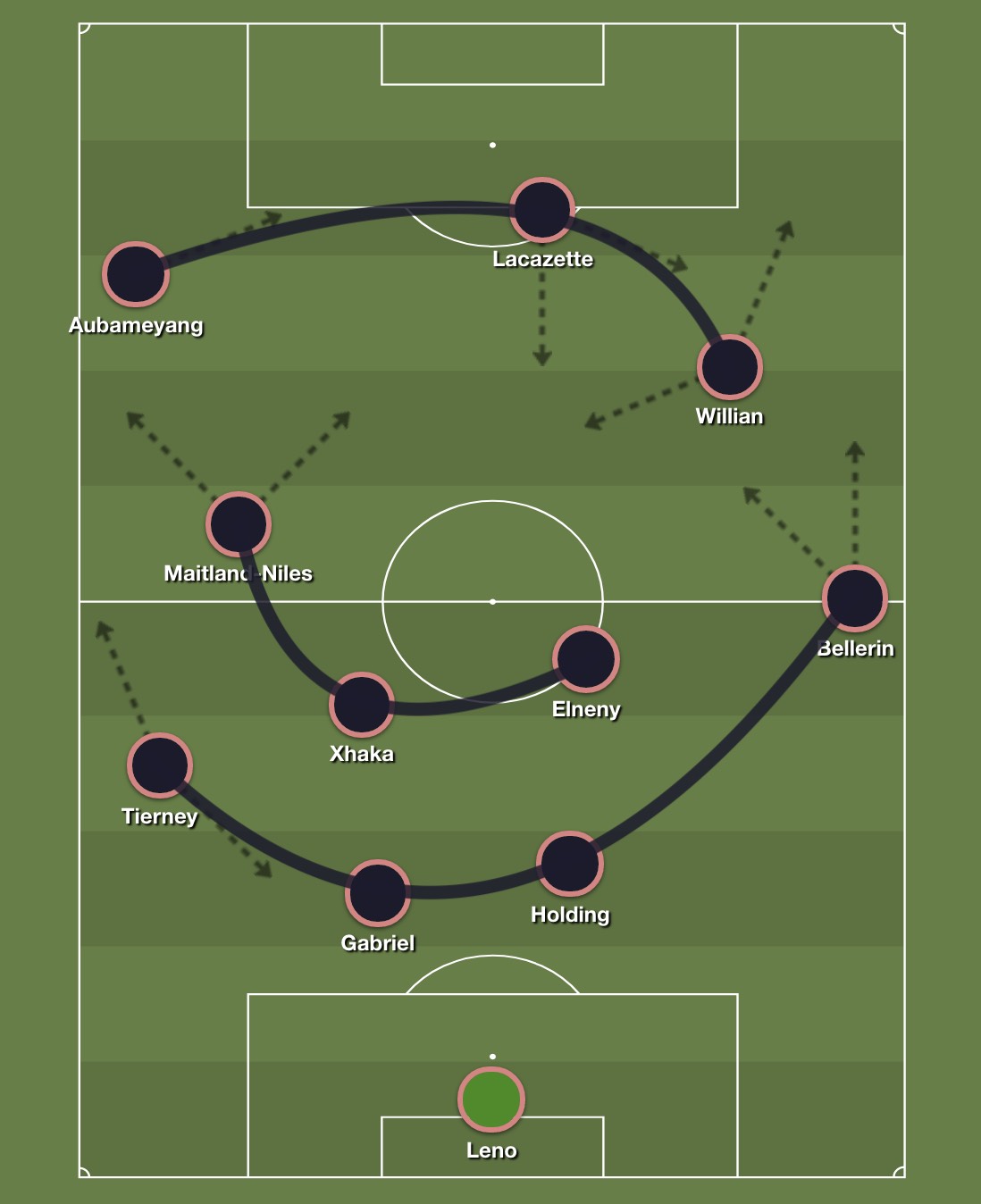 Different ‘formations’, but all one flexible movement. All the same shape. In the final third, as Arsenal attacked the box or pressed, the shape morphed once again, depending heavily on the positioning of Maitland-Niles and whether or not Tierney joined the attack. 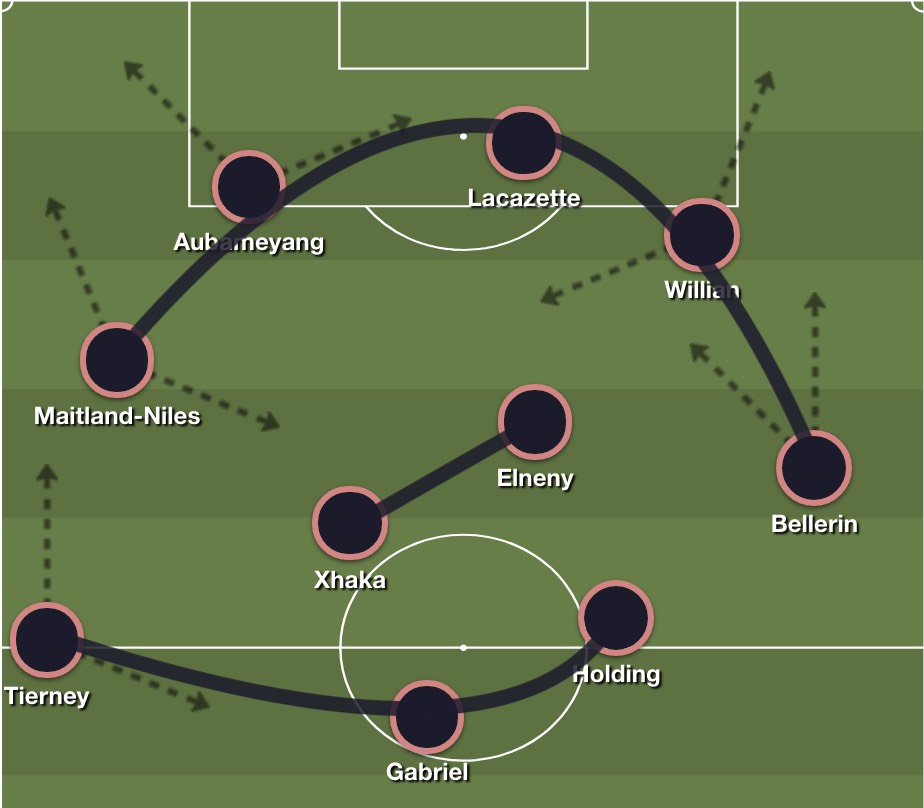 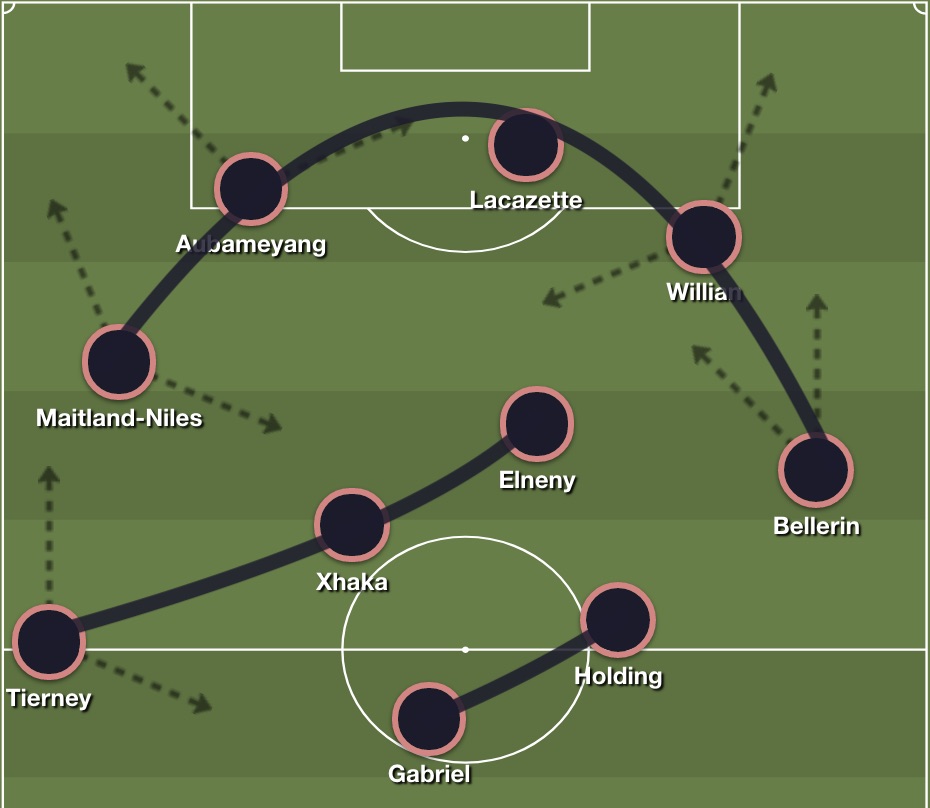 That’s all worth some more exploration and explanation, as it’s certain to be a feature as time goes on with Mikel Arteta in charge. Certain patterns will (and already have) emerge all the same and the key is that the players understand not only their individual roles but also how to combine with their team-mates.

So, from front to back, here’s a look at how Arsenal lined up at Craven Cottage, how players took on what looked like multiple ‘traditional’ roles at a time, but also some of the constants that were present throughout.

Left centre-back or left-back or left-wing back? Tierney played them all, at the same time. As Arsenal built from the goalkeeper, Tierney would hug the touchline. Sometimes he would line up barely further upfield than Gabriel, stretching Fulham’s press and providing an out-ball. On other occasions he pushed up and occupied Fulham right-back Denis Odoi as Maitland-Niles tucked infield. The new England man’s role was the most flexible of anyone on the pitch.

Though he wasn’t heavily involved on the ball, his understanding of his job(s) in Arteta’s system is superb. He tucked in when Tierney advanced, freeing up the flank and occupying Harrison Reed in the Fulham midfield.

He overlapped when Tierney was deeper and Aubameyang tucked infield. He even made some impressive bursting underlapping runs as Aubameyang drew centre-back Michael Hector wide, having pulled Odoi out of the right-back slot in the first place. 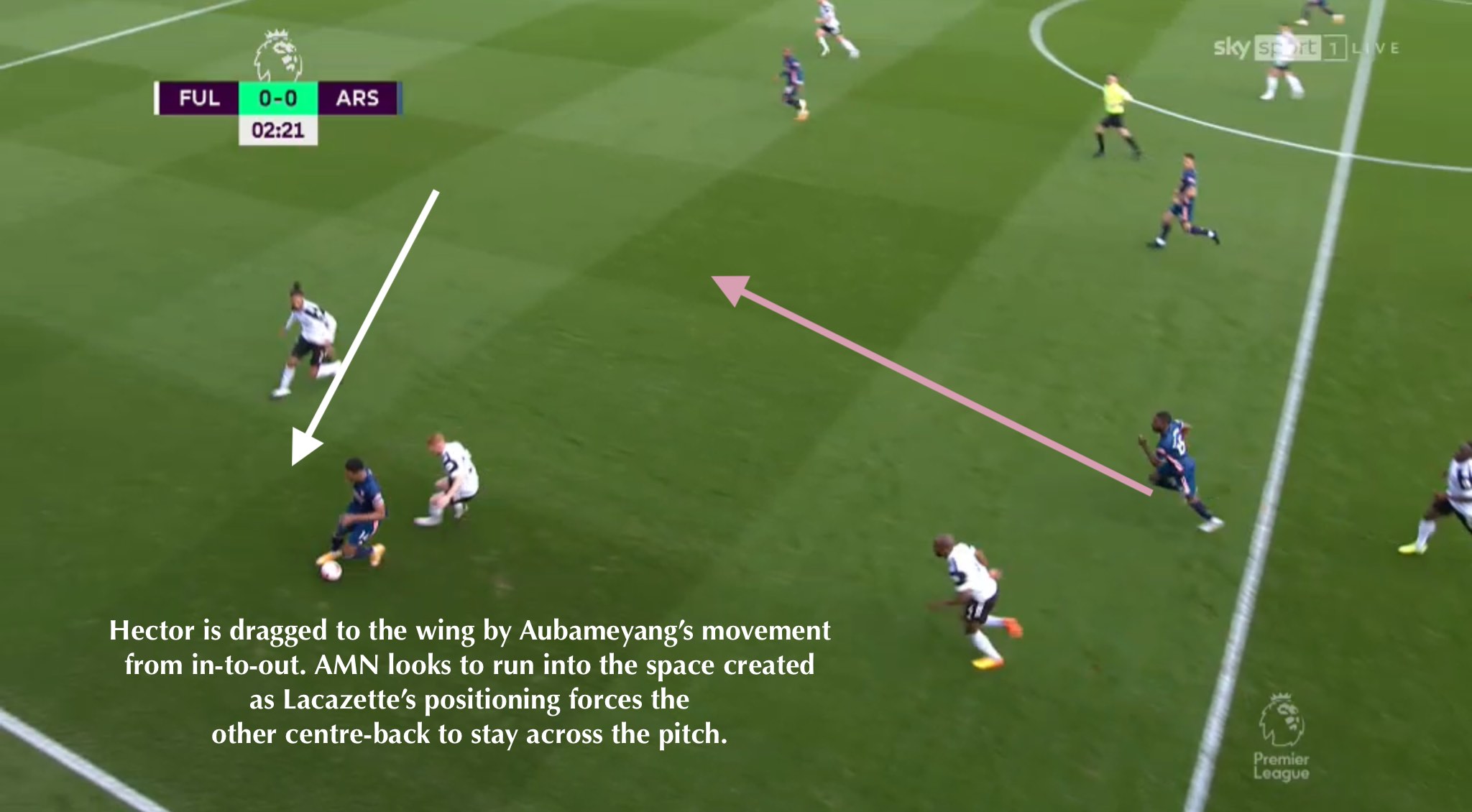 Arsenal’s right flank offered some similar variations, though for different reasons. Broadly speaking, Hector Bellerin played like a more traditional right-back, keeping his width and overlapping the majority of the time. Behind him he had Rob Holding, a true centre-back who didn’t head wide, as Tierney did. Ahead of him he had Willian. Unlike Aubameyang, the team’s chief goalscorer, Willian is more of a creator, a player who is drawn to the ball.

The summer signing dropped a bit deeper, and a bit more central (sometimes even swapping positions with Lacazette momentarily) and was looking to create things rather than mainly get on the end of them.

But the flexibility and positional rotations still existed between him and Bellerin, with the Spaniard sometimes making those same runs into the half-spaces with Willian holding the width. The important thing, as far as Arteta is concerned, is that one player holds the width while the other looks to run deep into the space that is created. As long as Arsenal come up against four-man defences, they’ll look to drag fullbacks and centre-backs across the pitch and create these gaps by using five players across the width of the pitch.

When Arsenal then arrived in dangerous positions, there were a few noticeable features to the attacks. Firstly, the Gunners would fill the box with players, hoping to get on the end of something. Including the players crossing the ball, there were frequently five or six players inside the opposition area. 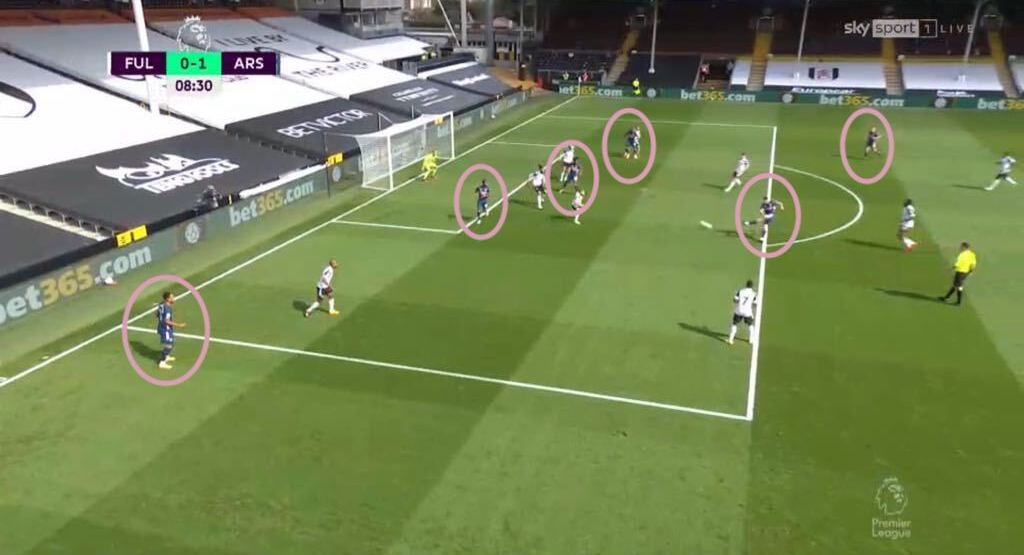 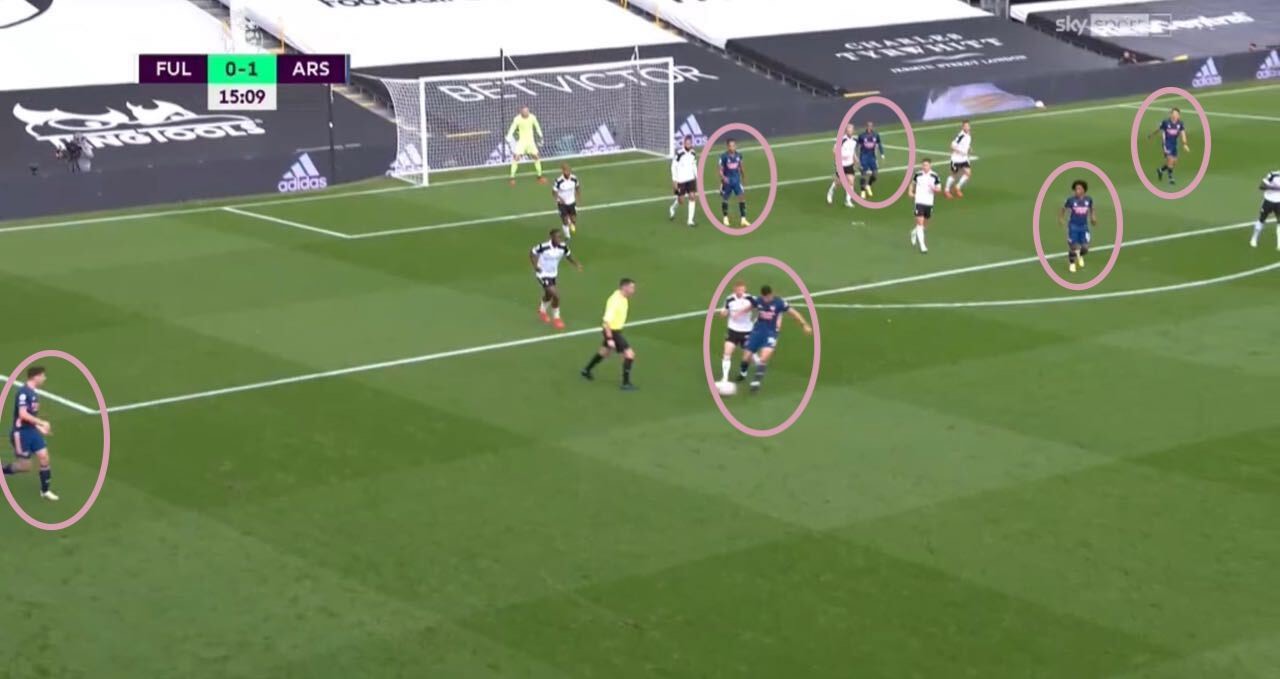 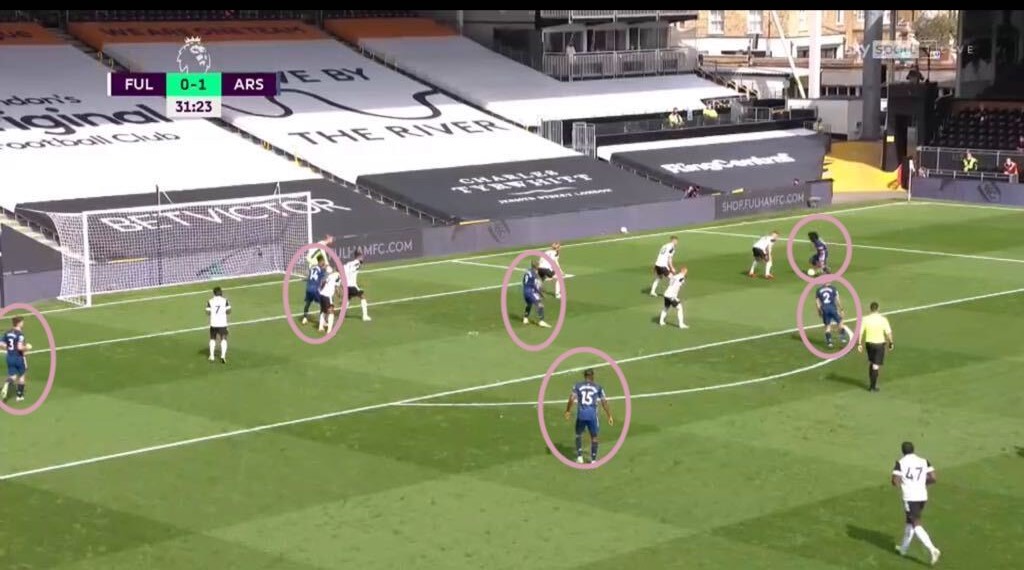 With as many players as possible in the box, Arsenal will have a great chance of improving on last season’s tally of 56 Premier League goals, the club’s lowest return since 1996. Getting more goals into the team has to be a priority and getting more players in the box as the ball goes out wide seems like an easy way to rectify it. And it did, in fact, lead to the first goal of the new campaign (the first picture above), with Xhaka’s effort bouncing to Willian, whose attempt on goal was poked home by Lacazette.

The more players in the area, the more likely the ball will fall to one of them. Perhaps more importantly, the players on the edge of the box are also well positioned. There’s no use throwing everyone forward if it leaves you wide open at the back, as Arsenal have learned the hard way over the years.

In the various pictures above Xhaka, Bellerin, Maitland-Niles are protecting the edge of the area. Creating almost a shield from counter-attacking opportunities should the ball be cleared to the edge of the box. As well as having half the team attacking the box, Arsenal are securting the situation defensively. And there are multiple benefits. Protection against a counter-attack, yes, but winning the second ball could also lead to an immediate attempt on goal, or allow the team to recycle possession, hemming the opposition in. With so many players in the final third, Fulham have no choice but to retreat. 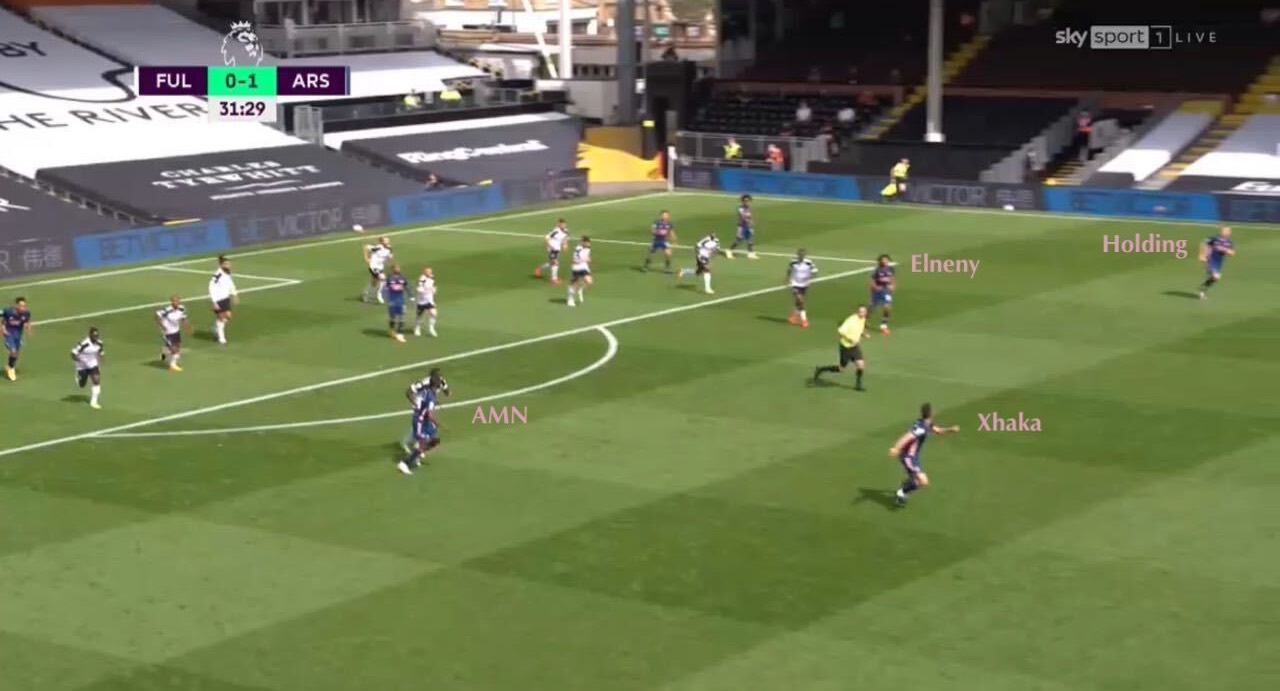 The signing of impressive one-on-one defenders like Gabriel and William Saliba should allow Arteta’s Arsenal to squeeze higher up the pitch, even leaving just one defender on one forward at the back, if a striker decides not to come back and help with the defensive effort.

Even on the break, Arsenal charge forward in numbers. Many have pointed out the positioning of Maitland-Niles and Tierney as Aubameyang scored the third Arsenal goal and how it mirrored the opener in the Community Shield, and indeed it did, with both players casting doubt in the defender’s minds, providing Aubameyang with a distraction but also options. But those two weren’t the only ones in support, with Bellerin, Xhaka, Lacazette and Willian all charging towards the box. 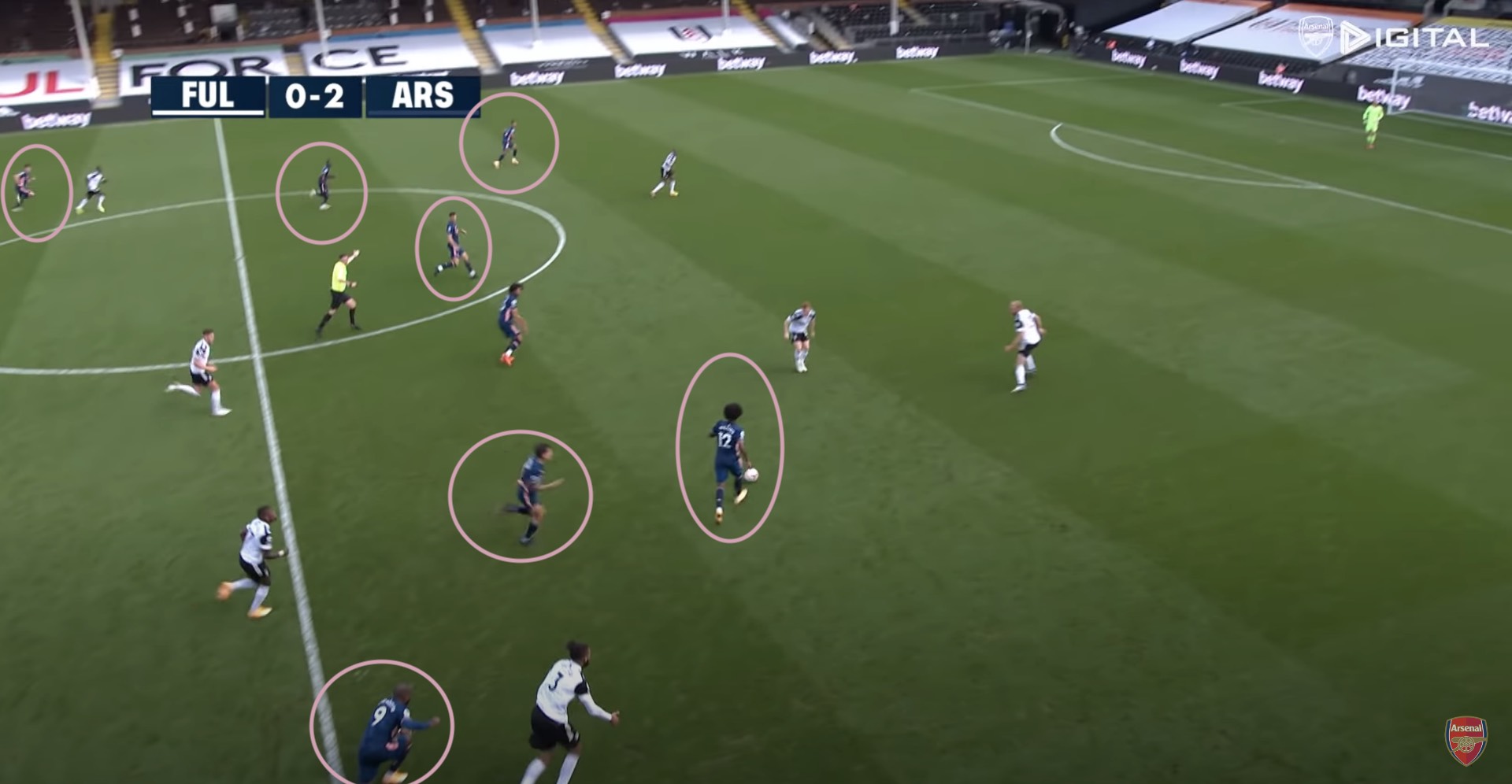 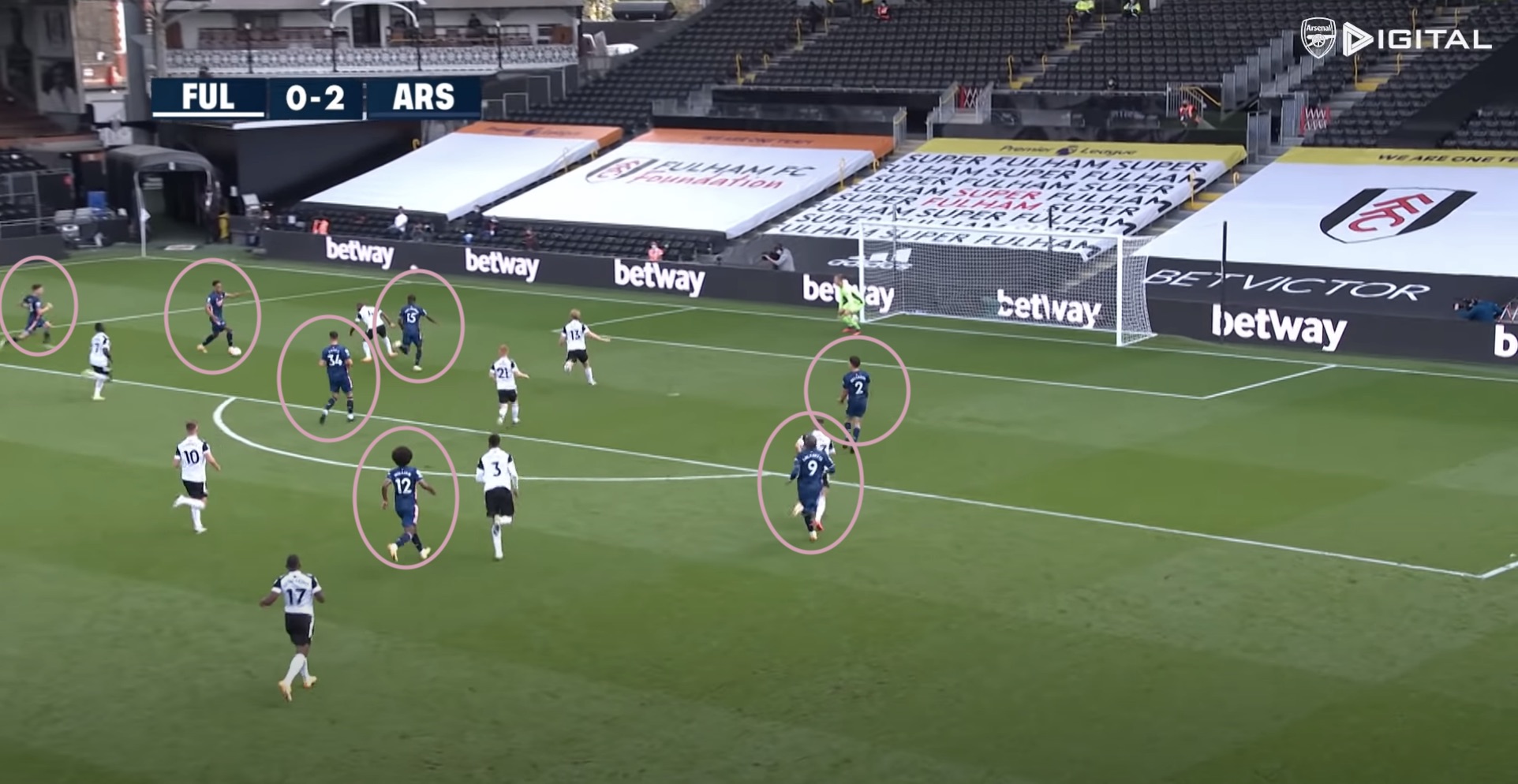 That’s seven of the outfield players in the thick of things. With Mohamed Elneny, who could have also joined in, intelligently spotting the runs of Tierney and Maitland-Niles and deciding to hang back in front of Gabriel, in case the ball broke loose and Fulham had the chance to break.

This goal looks like a classic counter-attack but came from a long build-up sequence starting in Arsenal’s own box. If they can draw teams on, they can break without ever actually losing possession of the ball. Clearly that doesn’t just apply to the Premier League’s heavyweights.

Attacking in numbers without over-exposing themselves defensively, Arteta’s vision at Arsenal is becoming clearer. Occupying the box so heavily will only lead to more chances and, hopefully, less reliance on Aubameyang. Arsenal won four Premier League games before 9 December in 2019/20, all by a single goal, and the Gabonese scored the winner in three of them. His strike on Saturday was just the icing on our opening day cake and, hopefully, signifies the transition into a more threatening team as a whole.

Previous articleArsecast Extra Episode 372 – 14.09.2020
Next articleBack three or back four? For now, Arteta is making the former work better.