Considering the new Premier League season begins on Saturday, it’s all very quiet. The build-up has been pretty low key. Perhaps it might be considered a surprise, but given everything else that has gone on in this cursed year of 2020, it’s fairly low down the list of things which might make our collective eyebrows raise.

I know the Interlull has played a part in that. Usually players aren’t away with their countries in the week before the opening game, but usually there isn’t a global pandemic which has had a massive impact on football fixtures so they’re trying to squeeze in as much as possible in a very short time. Thankfully, the glorious Nations Cup has not had to suffer so we can all get excited about who wins the Nations Cup, if there even is a Nations Cup to play for. Has anyone seen it? Don’t @ me.

Last night Ainsley Maitland-Niles made his England debut, coming on as a sub in what was described as a ‘dour’ 0-0 draw with Denmark. I find it hard to fathom how a man as exciting and thrilling as Gareth Southgate could preside over such a thing, but I suppose when you’re facing a Danish side which no longer has the presence and charisma of Nicklas Bendtner, these things can happen.

It’s nice for Ainsley though, a reward for his recent good form, and if we’re going to be massively cynical about it, he’s now a full international and that has an effect on his valuation if other clubs want to try and buy him. Yesterday, it was reported that Aston Villa were set to spend £28m plus add-ons for Brentford’s Ollie Watkins. I know there’s a premium for players who score goals and make assists, but it demonstrates quite clearly that there is still a solid market for good players that other teams want.

Maitland-Niles is 23, has 100+ first team appearances under his belt, is versatile, and you can understand why Arsenal were reluctant to do any business with Wolves based on the offer they made for him. The same Wolves, by the way, that splashed out £36m on an 18 year old forward barely into double-figures in terms of appearances and with three senior goals to his name. I’m not suggesting there’s anything untoward about that deal or anything, but if that’s the level of expenditure you’re willing to make for a player with almost no experience (but obviously some potential), you need to do better to get someone like Maitland-Niles.

What it does bring into sharp focus though is that the market is there, but only for players other teams want, and we seem to have a lot of players we don’t particularly want that aren’t particularly coveted by others. Hence the difficulties in selling (as per yesterday’s post), and probably why we see Lucas Torreira back in the training pics. For all the talk of interest from Italy, nobody has yet made a bid good enough for us to consider letting him go, so he’s with us until that happens.

I saw Matteo Guendouzi post on his Instagram about how it was time to go ‘back to work @arsenal’, which is nice because I was worried that after the FA Cup final he’d forgotten the club’s username when he quite pointedly posted a picture of his holidays rather than any message of congratulations to his teammates. Perhaps there’s been some mending of fences, olive branches extended and what not, but right now – like Torreira – his immediate future is in North London. How much of that is by design, and how much is simply necessity because nobody has expressed any interest in him, I’ll leave it up to you to decide.

Certainly Lyon didn’t want him when we offered him to them as part of a deal for Houssem Aouar. Speaking yesterday, their sporting director revealed he’d had conversations with Edu, his former Brazilian teammate, and said:

We spoke on the phone. Houssem Aouar is really appreciated by Arteta. There have been some discussions for Matteo Guendouzi who is also a good player.

He was mentioned during the discussion, but this is not the profile we need, we were very clear.

Anyway, the key takeaway there isn’t so much that they didn’t want Guendouzi, more that Arteta really likes Aouar. Juninho also mentioned interest in the player from PSG and Man City who, now that they can’t get the little fella from Barcelona, might well step things up from their side. If that’s what we’re trying to compete with, I fear we’re in for some disappointment, because the lure of Champions League and Man City wages would be basically impossible to resist. Let’s see what happens though, and let’s hope that we’ve got other targets in mind if he goes elsewhere.

Finally for this morning, I enjoyed this snap from the latest training pictures: 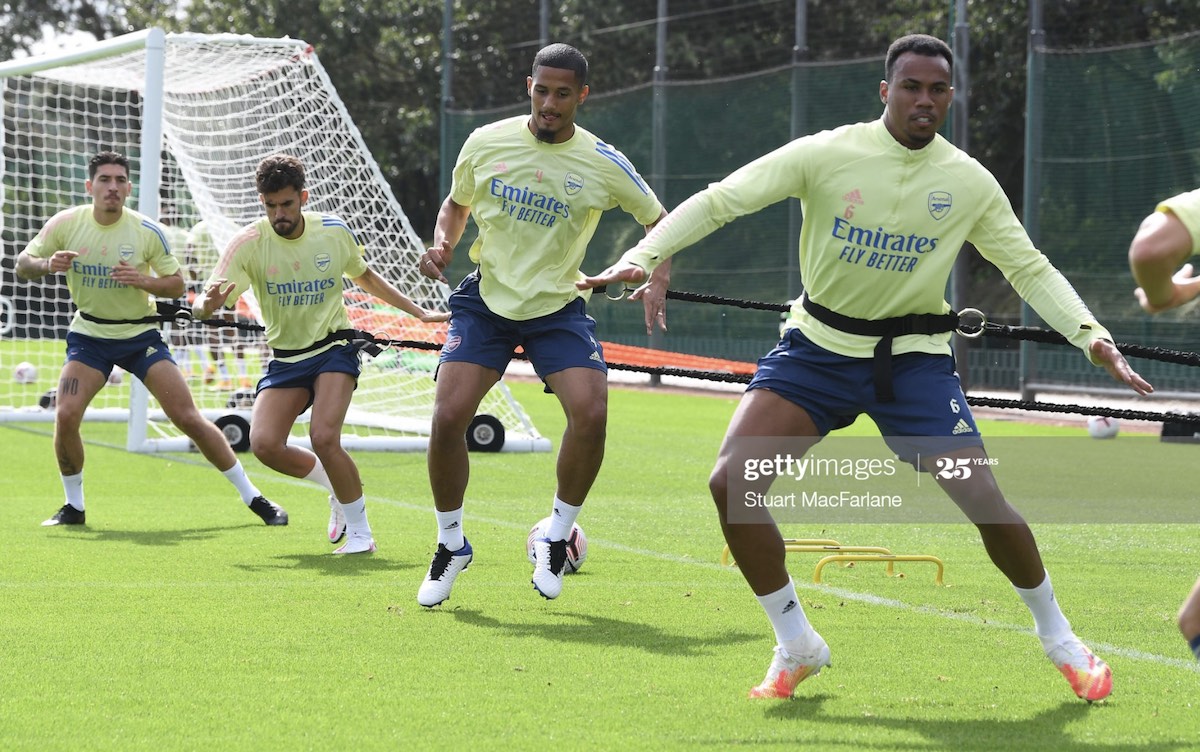 First, who could not love the idea of us tying our defenders (and Dani Ceballos) together? It’s like the old days, when George Graham did the same thing with the famous back four – often going weeks without untying them which made for some interesting domestic situations but the payoff was evident on the pitch with their instantly coordinated movements/offside trap.

Second, I know there’s an element of small/far-away going on, but William Saliba and Gabriel bring a physical presence to the team which is really important – particularly at centre-half. We haven’t been the biggest back there for a while, but in these two – plus 6’4 Pablo Mari – we’ve addressed that issue in our recruitment. Biggest isn’t always best, but when you’re a team which has conceded more goals from set-pieces than any other, it definitely helps.

Right, let’s leave it there for now. I suspect the news/build-up will start to ramp up today, so any stories we’ll cover over on Arseblog News. Also, for those interested in Fantasy Football, we are running a league this season for our Patreon Members, with actual prizes like cash and Arsenal shirts (and a trophy for 4th). In the interests of fairness, you do have to be registered before the season begins though, you can sign up for Patreon here – and if you’re already a member and want to get involved this post has all the details (alternatively, drop me a DM on Patreon and I’ll send you the code).