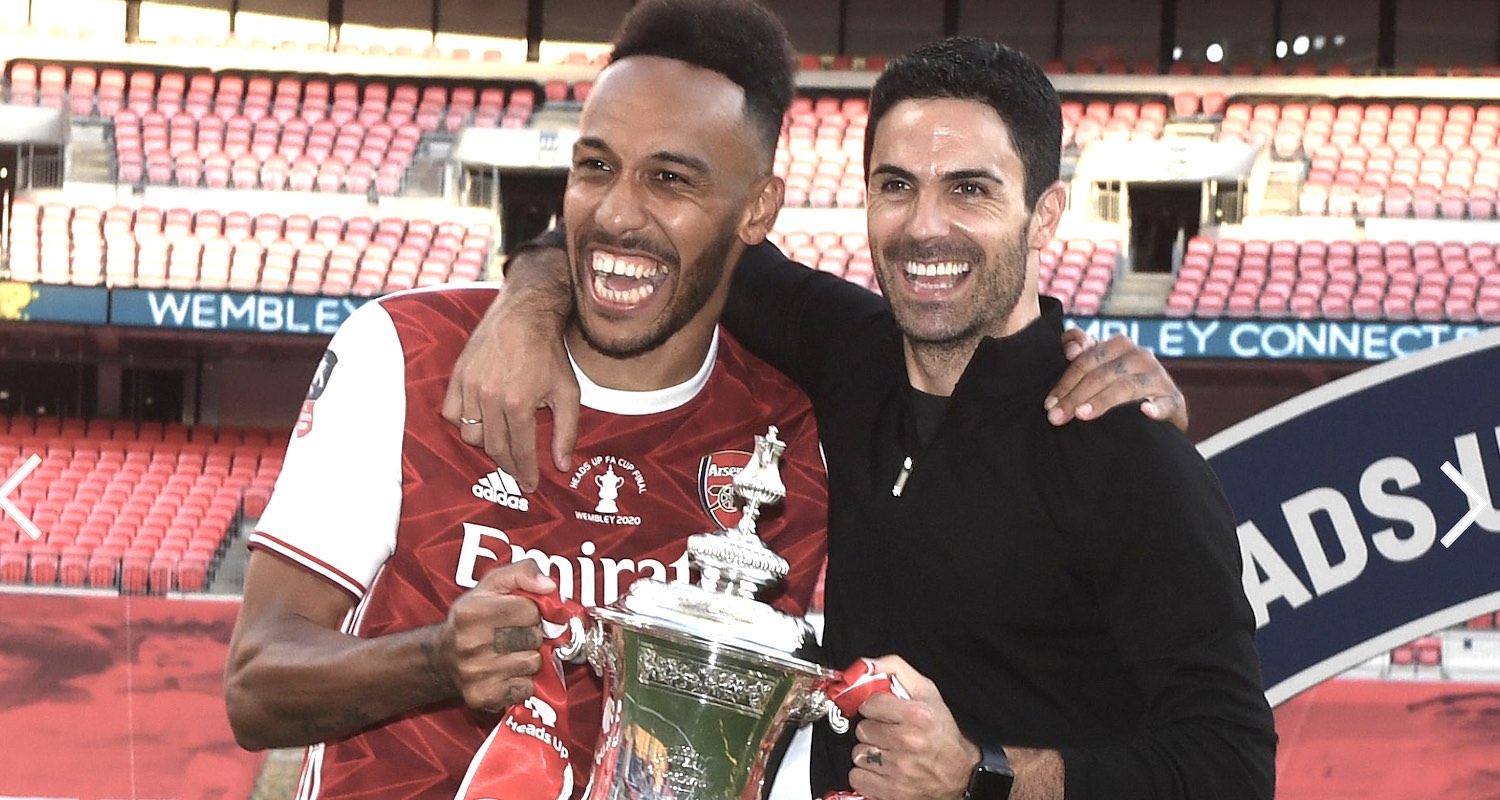 Good morning, welcome to a brand new week. How’s the head? Still a little delicate from the weekend? That’s all right. It’s the good kind of delicate, made bearable by winning a trophy and qualifying for Europe. We could all be sitting here on a Monday morning feeling quite miserable about things, you know how that might have gone.

Former Gunner Olivier Giroud might have played one of those games instead of the one where he did the world’s greatest impression. It is the impression of a giant tree with a mouth who is lightly brushed by a smaller tree, before he lets out an anguished shriek of mild dismay before topping slowly to the forest floor.

This just gets funnier the more you watch it ? https://t.co/LfbzPcSBvG

To keep up the botanical theme, Dani Ceballos is a busy little bush who just happens to pass by as the once mighty oak – now considered a weedy sapling as he writhes on the floor in pretend agony – who points and laughs at him. I think I’ve watched this 1000 times since yesterday. I was never an anti-Giroud person, but games like a cup final throw up moments which are to be cherished and enjoyed, and this is one of them.

The shriek … the pause … the fall … it’s just one of the funniest things I have ever seen.

Obviously there is deeper analysis to be made of the win, and everything else, but I think most of that can wait for the Arsecast Extra later, and throughout the week here on the site. Which isn’t to say we’re going to absolutely milk the FA Cup win or anything, but that’s exactly what we’re going to be doing. The now traditional end of season player ratings will be done through that prism, which may add a bit of gloss to one or two individuals, but ultimately when your goal is to win something and you do that, the ripple-effect is positive.

So, back to the FA Cup, and if you haven’t already checked out The FA’s YouTube channel, there’s lots of stuff on there to enjoy. We’ve got some of it over on Arseblog News too, but the behind the scenes stuff is quite interesting. There was Tunnel Cam – in which we saw the glamorous life of Stuart MacFarlane, one of the club’s photographers – sitting on the floor uploading his pictures for Arsenal fans around the world to enjoy.

I enjoyed the Manager Cam, not just to see what Mikel Arteta was doing, but also Frank Lampard and Jody Morris in the opposition technical area. At times it looked as if Morris was explaining complex things to Lampard.

Lampard: Why don’t they just call them mini-burgers then?

Morris: I think it’s because people wouldn’t order them for fear of them being an insubstantial meal.

I watched Mikel Arteta pick up his yellow card for a little scuffle with Antonio Rudiger, I don’t quite know what happened but I liked that even now as a manager he’s not backing down against someone considerably bigger than him. I stand to be corrected on these, but he’s racking up the firsts. The first person to win the cup for Arsenal as a player and a manager; the quickest trophy win in terms of taking over as manager (I calculate 128 active days, leaving out the lockdown period); and the first Arsenal boss to be booked in an FA Cup final. I’ll have some more considered thoughts on what this means for Arteta on the podcast, and on the blog later in the week.

Update: My apologies to George Graham who was obviously the first player/manager/cup winner, my brain is an idiot.

Also on the Manager Cam, this angle of Aubameyang about to score the winning goal, but before he even clips the ball beyond Willy Caballero, Granit Xhaka is celebrating:

The goal itself was a demonstration of just how good Aubameyang is, but the picture also shows you that his teammates know just how good he is too. The Swiss international’s embrace with Arteta afterwards was one of the most heartwarming moments of the day for me. When you consider how toxic everything had been with Xhaka, the captaincy, the incident during the Crystal Palace game, and his express desire to leave it all behind and join a much smaller club like Hertha Berlin (with all due respect etc etc), to finish the season like that is quite the turnaround.

It’s very easy for a manager to say ‘Everyone gets a clean slate’ when he comes into a club, but much more difficult to implement. Some players and situations have so much baggage it’s almost impossible to do it. Yet when you look at how some squad members have been given a chance when it seemed their Arsenal races were run, it shows you not everything in football is black and white.

Xhaka is obviously one. Shkodran Mustafi another – and it’s worth going back to when Arteta took over, and remembering what the lay of the land was. He’d been told in no uncertain terms – and very publicly too – by Unai Emery he wasn’t wanted, his stock among fans was very low for obvious reasons, and he’d barely played apart from some Europa League/EFL Cup appearances. One of the first things Arteta did was put him in the team, which I think was brave, all things considered. The easy option would have been to continue to freeze him out, not run the risk of Mustafi doing Mustafi things and ultimately being responsible for that, but he played him. Even when he, as City’s assistant, was there to witness some of the German’s worst moments in an Arsenal shirt.

Can we talk too about Ainsley Maitland-Niles, who just a few weeks ago would have been in nobody’s FA Cup final team. He played brilliantly in the semi-final, winning him a place in the team for Saturday, and he put in a big shift to help us win the cup. He responded to Arteta’s challenge back in March:

Ainsley needs to put his head down and work hard and show me every day in training that he wants it more than anyone else, he wants to play for this club and fight for his place.

He did it, and he has an FA Cup winners medal to show for it, and I think if he wants it he also has a future with Arsenal under Arteta. His selection against Chelsea wasn’t simply a reward for playing well in the previous round. The manager had to be more pragmatic than that. So much was riding on this game for the entire club, he couldn’t just play someone because he’d been good before. He played him because he felt he was the best man to help Arsenal win the cup on the day. It was a show of faith in him, and it was fantastic to see him do so well. At 22 he now has exactly 100 first team appearances to his name, and it would be great to see him stay, and kick on from here because I think he has the kind of profile that’s very useful to the modern manager in terms of versatility and skillset.

The flip side of that is Matteo Guendouzi who has blown his chance to be part of what Arteta is doing at this club. I think sometimes we can read a bit too much into what players put on their social media channels, but the Frenchman posting a picture of his holidays without so much as a mention of congratulations for his teammates or his club tells you everything you need to know. He will become a small footnote in the history of Arsenal –  sailing away in his woolly haired dinghy to parts unknown when he could have stayed on board the big ship Arteta is turning in the right direction. Frankly though, when it comes to Guendouzi:

Did you spot this picture from Wembley?

Finally, I really liked the picture which features on today’s blog. The captain and the manager. Aubameyang’s Twitter post calling Arteta ‘My manager’. I have no inside info on this at all, and maybe it’s just the warm glow of winning the cup helping me see things more positively, but I think he’s going to stay. That’s going to cost Arsenal some money, and we’re probably going to have to try and shift our other biggest earner in order to do it, but I’m feeling pretty good about Aubameyang’s future right now.

Right, I’ll leave it there for now, but James and I are going to be an FA Cup final winning Arsecast Extra for you this morning. As ever if you have questions or topics for discussion, send to @gunnerblog and @arseblog on Twitter with the hashtag #arsecastextra – or if you’re on Arseblog Member on Patreon, leave your question in the #arsecast-extra-questions channel on our Discord server.