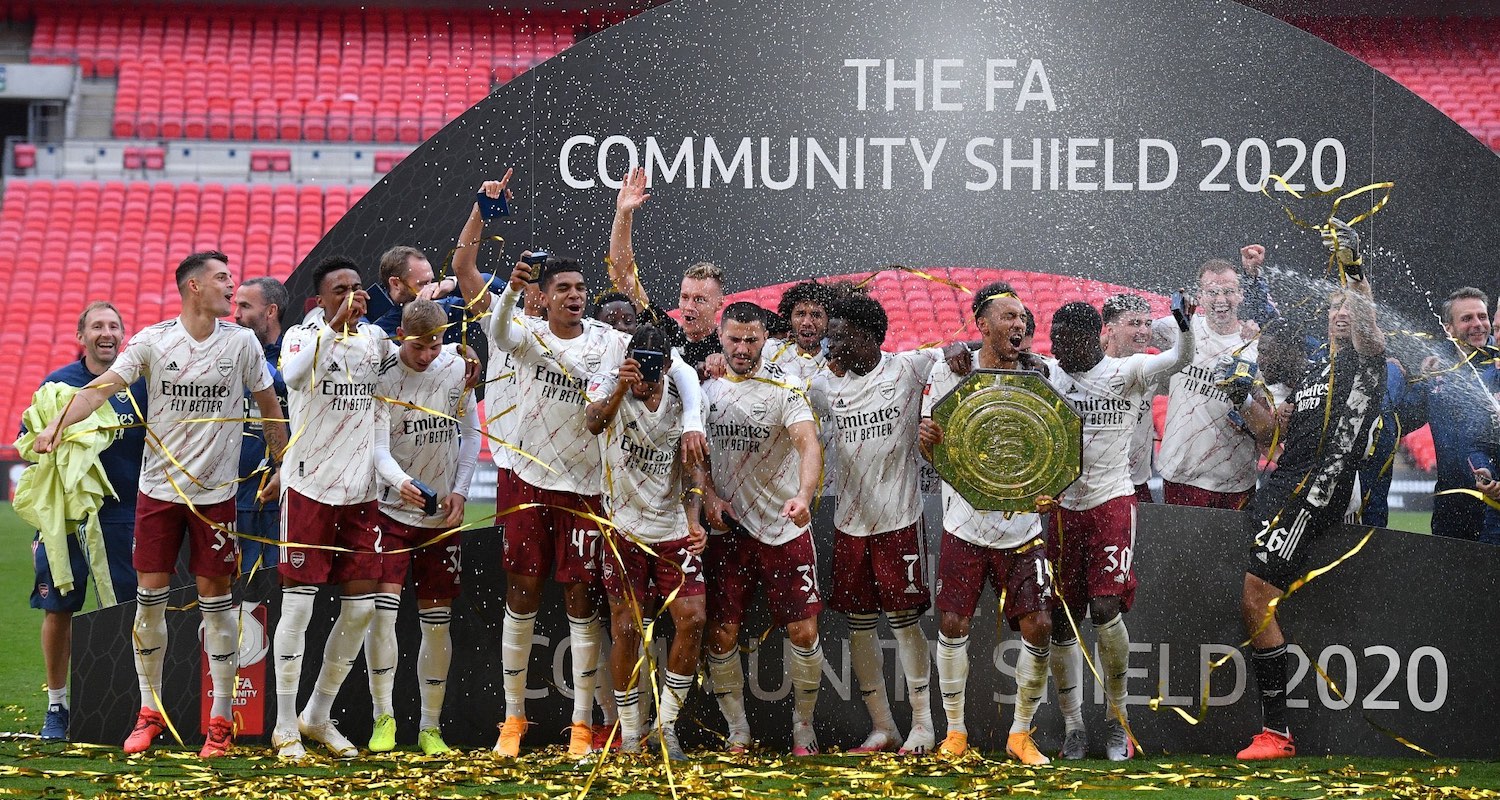 Morning all, some  Community Shield thoughts for you this morning, after our penalty shoot-out win over Liverpool yesterday.

First, it’s obviously really nice to win. My interest in this game beforehand was peripheral. I felt it was almost too soon to be playing a fixture like this, and I was worried that we’d struggle physically given how short the break from the end of the previous season was. Once it starts though, it’s Arsenal playing the Mugsmashers and it’s impossible not to get into it.

Especially when you score a goal as good as the one we did after 12 minutes.

I can still appreciate a fine goal when I see one though, James.

One of the most obvious things about the way we played yesterday was the way we tried to keep possession, regardless of the pressure we were under and how much Liverpool pressed. I remember Mikel Arteta talking about this last season, where he basically said he doesn’t want to see his players just boot the ball away when we’re under pressure at the back. In his mind, you just give it away and the pressure returns because the opposition now have it.

That was apparent throughout the game yesterday – not just at the back either, the way we popped the ball about in midfield was really pleasing too, but the goal began with a goal kick after James Milner had missed a chance for Liverpool.

Elneny took the ball, facing his own goal with opposition close by, and went backwards to Rob Holding who was in as deep a position as anyone can be. From there he played it out to Hector Bellerin, it then went down the line to Bukayo Saka who found Aubameyang with a perfectly weighted cross-field pass. The captain took advantage of the inexperience of Liverpool’s right back, and the finish was unerring. The man just loves a Wembley goal these days.

I hesitate to declare this Arteta-ball or anything like that, but it’s clear that this is the way he is instructing his team to play, and while I think there are still some rough edges at times, it’s also clear that we are becoming more and more comfortable with it. A midfield duo of Granit Xhaka and Mohamed Elneny is far from the most mobile and quick-footed we’ve ever fielded, but both of them were very good and used the ball smartly throughout.

There was more to us than just that goal too, we played some really nice stuff in the first half, and there were a couple of good chances for Eddie Nketiah who was denied by a good save, and saw his second effort fly high and wide. The way we created those chances was extremely positive though, and Saka looks a lot more comfortable from the right than he did previously. That said, I think he’s the kind of player who will fit in pretty much anywhere, and I have a feeling that he’s going to become a key part of the team this season – quite where though, I’m not sure.

Liverpool equalised late on as the physical demands of the game caught up with us. The lack of changes felt like Arteta was trying to get fitness into the legs of his most important players, and when it came to the penalty shoot-out, ours were pretty much perfect. It was fitting, of course, that Aubameyang put away the one to win it, but the ones that came before left one of the best keepers in the game with no chance every single time.

An interesting aspect to our performance and line-up was the inclusion of some players who have been strongly linked with moves away. Rob Holding is off to Newcastle on loan apparently, but played well. Ainsley Maitland-Niles was excellent again, and he was asked afterwards about the rumours of his departure, saying:

I’m an Arsenal player until I’m told otherwise. My heart is in this club and while I’m here I’m going to give 100% to the club, so that’s that.

To me that doesn’t sound iron-clad that he’s staying, and afterwards Mikel Arteta again made the point that playing him in games like this is the best way for him to convince the player of his faith in him:

The best way to show a player how his manager thinks about him is to give him a chance to play or not. Today in a final again, he started, played the 90 minutes like against City in the semi-final and Chelsea in the final.

Like many, I have been able to rationalise his sale because of the fact this is a summer in which we need to raise funds, and all the rest. But there was a moment in the second half when he showed such commitment and concentration to race back with Sadio Mane (who had been switched to the other wing), before cleanly, clinically almost, winning the ball in our own area. I don’t know how to explain it, but seeing an Academy graduate deal with one of the best players in the Premier League in that way – in a position which isn’t his natural one by any means – made me think we’d be making a big mistake letting him go. He’s developing and improving under Arteta, and while I realise we still have those financial realities to deal with, selling him to a team like Wolves – who, being realistic, are now direct rivals – wouldn’t be good business.

Similarly, Emi Martinez was very good again, in no small part because he is a very good goalkeeper. His situation is complicated because he wants to be number one, he has two years left on a contract and there are reportedly issues over his salary level too. I mentioned earlier how much more comfortable we look in possession, and while I think Bernd Leno has been excellent for us, and there’s not a lot between them as shot stoppers, I think Emi is better than him with the ball at his feet. If this is a fundamental of how Arteta wants to play, it’s got to be a consideration in how we deal with his situation.

The issue, of course, isn’t just what we want as fans, or even what the club wants. The desire of the players is also a major factor. I just think it would be a massive shame if two players who have done nothing else but demonstrate quality and commitment were to depart. What else can they do to merit a chance to fulfill their ambitions here? What message does it send if those performance levels don’t result in a positive outcome?

Maybe, and I’m not suggesting this is the case, a positive outcome for both of them personally is a move somewhere else, a role of greater importance, and a healthy pay rise. That’s something we have to contend with as a club, and if players make life difficult for you because they are performing to a high standard, it’s kind of a good problem to have.

It doesn’t alter the financial reality of our situation though. Can we commit more resources to Martinez and Maitland-Niles while still doing the things people want us to do in the transfer market? It’s difficult to find that balance, and I have a suspicion that some of the excitement of incoming deals will be tinged by sadness and regret about how they’ve been financed.

Right, lots more to talk about on the Arsecast Extra tomorrow with James, so join us for that. In the meantime, have a great Sunday.