Arsenal have developed an encouraging dilemma in the goalkeeping department in recent weeks. Bernd Leno’s serious looking injury at Brighton in June had Gunners’ fans cradling their heads in their hands. The German has undoubtedly been one of the team’s star performers this season and, regrettably, Arsenal have kept him plenty busy in his time at the club.

Some, myself included, wonder how Leno might fare in a team that gives him more time for contemplation. There is an old saying that, if you want something done, ask a busy person. This very much applies to goalkeepers, who are often prone to shine in front of lacklustre defenders that allow many shots.

This can give a goalie a favourable highlight reel as the need for constant engagement focuses the mind. The ‘keepers that make the step up to bigger clubs successfully are the ones that can make the one or two big interventions they are required to make in a 90-minute spell. That isn’t just a question of concentration but one of geometry.

Better teams give up fewer chances because they dominate play, but when they do concede chances, they tend to be of better quality for the opposition. If your team is being pushed back into its own area, angles for a shot are restricted and that stacks the odds in a goalkeeper’s favour. For sides that consistently apply pressure to their opponents, the ‘keeper tends to be more exposed when the opposition counter.

To be clear, I am not saying I don’t think Leno could be this goalkeeper, I just don’t think we know yet because Arsenal haven’t been good enough to allow him to demonstrate. Leno’s injury proved not to be quite as serious as it initially looked, which came as a great relief to Arsenal. Of even greater relief has been the form of Emi Martinez since taking his place between the sticks.

Remarkably, it has taken nearly a decade for the Argentine to rack up 30 Arsenal appearances having joined the club as a teenager. At the beginning of the season, with Ospina sold, many of us wondered whether Martinez had the makings of a good back-up goalkeeper. Now many are asking whether he might be the long-term number 1.

We have a small sample size with which to judge Emi but it has been a pleasing development nonetheless. Having two good goalkeepers is….good. It creates competition and confidence. However, given the club’s relatively austere financial state, it does beg the question as to whether the Arsenal hierarchy might need to make a difficult call.

Ordinarily, having two goalkeepers with genuine aspirations to be the first choice would be optimal. Years of poor transfer spending, contract management and a failure to qualify for the Champions League has left the club in a sell to buy situation and very little of what they would like to sell is likely to generate much revenue- especially in a depressed market.

Having a good 27-year old and a good 28-year old goalkeeper might not be the wisest use of limited resource- you can only play one at a time after all. Arsenal’s reserve goalies during the Invincibles season were Stuart Taylor and Graham Stack. Liverpool’s current back up option is Adrian, who barely belongs on the same training ground as Alisson.

Contrary to popular belief, while having a deep squad is desirable, it’s the quality of your starting eleven that matters most in the league. Your squad wins you cup competitions nowadays, but your starting 13 or 14 players determines your league finish. If you lose a star player, then you just have to suck it up unless you are infinitely resourced like Manchester City.

Had Liverpool lost Mane, van Dijk or Salah for an extended period over the last two years, there’s just no way they would have won the Champions League or the Premier League- if Thierry Henry had ruptured his cruciate in 2003, there would have been no Invincibles. Barca basically employ ringers as back up forwards so that they can keep paying Suarez and Messi.

In a strange way, Arsenal might have benefitted had Leno’s injury been more long-term so they could get a proper sample size on Martinez. They may be minded to take a judgment on whether they think Emi’s current form is sustainable or whether a regression of sorts might be in the post.

Just been comparing stats from this season. Here are a select few…

The club could make a smart, revenue raising sale by putting one of their goalkeepers on the market and re-allocating the cash into a starting eleven in need of several injections of quality. Equally, they could make a really stupid sale, or else they could do nothing and allow the value of one or both players to depreciate on their books- a mistake they have made countless times over the last five years.

Arsenal Women manager Joe Montemurro rotates his goalkeepers depending on what the game requires. He has one goalkeeper for short distribution against teams that play in a deep block and one goalkeeper for long distribution against teams that like to press high. Martinez and Leno could fit a similar sort of mould, but you also risk upsetting both with such a strategy. (The women’s team loses and signs and big goalkeeper every summer, collateral damage Montemurro is happy to absorb in pursuit of his tactic).

To make this kind of decision, Arsenal would have to defer to the experts- presumably their goalkeeping coaches. They might also have to consider which goalkeeper is more suited to the team they aspire to be rather than the team they are now. I am sure Arteta envisages a future where his goalkeeper is less engaged than he is currently.

Martinez is enjoying a honeymoon period with the fans and it’s well-earned. I think he looks better claiming crosses from his line than the German, but Leno’s starfish technique is vastly superior to Martinez’s in one-on-one situations. [See how much of the goal he shows to Villa’s Keinan Davis in Tuesday night’s defeat at Villa Park- thankfully Davis shanked his finish]. 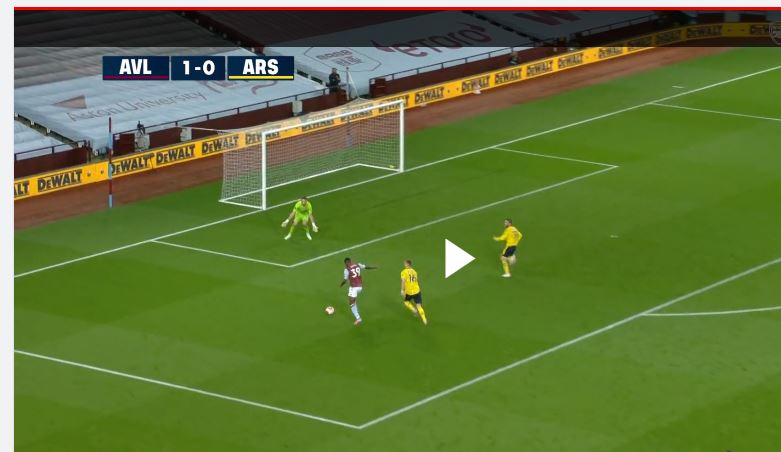 The big question is whether Emi’s current form is sustainable? Or should Arsenal sell him now at what could be the height of his value? Should they back Martinez and sell Leno? It’s not an easy or comfortable question but the kind Arsenal will have to entertain if they are to ‘outsmart the market.’ That judgment ought to be informed by the club’s technical staff and Arteta will need to consider certain questions.

Which ‘keeper suits his ideal style of distribution better? Does he eventually want his defence to play slightly higher up? In which case, which goalie is quicker from their line and more commanding in the area? It’s an unexpected and interesting conundrum for Arsenal- but a favourable one too. There aren’t many areas in the squad that provoke this kind of debate.