We actually have some Arsenal related stuff to go through today. Hallelujah. It’s now been exactly two months since our last game, the 1-0 win over West Ham, a game I barely remember. I had to look up the scorer. Alex Lacazette, with an Ozil assist I think. It’s weird how that’s faded from my memory.

In a video with Ian Wright, he talked a number of things, including the state of the club when he took over:

I felt that the energy around the training ground and the stadium wasn’t right for this magnificent club.

Arteta’s passion to make things better and the way he holds the club to standards that others didn’t are what give me genuine faith and belief in him. I don’t want to turn this into a finger pointing exercise, but the way things were allowed to fester under the previous coach was an indictment of Unai Emery but also those above.

Every time you hear Arteta speak you can see how much this job means to him, and while it’s early days, we’ve been looking for a proper leader, a figurehead, since the departure of Arsene Wenger. He’s had the most bizarre, surreal start to life in management but even with that I feel like it won’t faze him too much.

I also really liked his stance on players signing for the club, or convincing them to stay:

The moment we mention Arsenal, Ian you know what it means around the world. Everybody wants to come here and we have a really clear idea of what we are. It doesn’t need much convincing and if they do, for me it’s not a good starting point. If I have to convince a player to stay or to join us. To Arsenal? It holds me back a little bit.

It has to be ‘what do we have to do? I want to play for that club and represent exactly the values the style of play that I want’. That’s the kind of emotion I want to hear at the start. The same with the players that are here. Once you finish what are the feelings you have towards the club? That’s what really interests me.

Of course there are myriad factors which inform a player’s decision making, and there will be times when you face the kind of competition for a signing which demands you ‘convince’ them, so to speak. But as a general rule, as the kind of attitude you want your players to have, it’s something which resonates with fans.

Watch the full video below.

There’s a thread from Peter Hoest with some of the input from Raul and Vinai:

Vinai: (about KSE and the cash injection) Our owners have provided us with significant support. KSE are giving financial support. (interpretation open)

The contracts thing is interesting:

Fifa has allowed player contracts to be extended for 3 months until this season can be completed. The players cannot play for another club during this period.

With talk of the Bundesliga starting again this month, and headlines last night about how the UK are going to ease lockdown restrictions from Monday (although I’m not quite sure why), there might be optimism that the season can be completed within the time period that this contract extension would cover. But, do players have to play? If a contract expires on June 30th, is someone who would otherwise be free to leave compelled to take up that extension if games are taking place beyond that? I might try and explore this a little more on the podcast tomorrow.

Also, a shout out to Raul who has, during lockdown, forged another career as a Jim Royle lookalike. 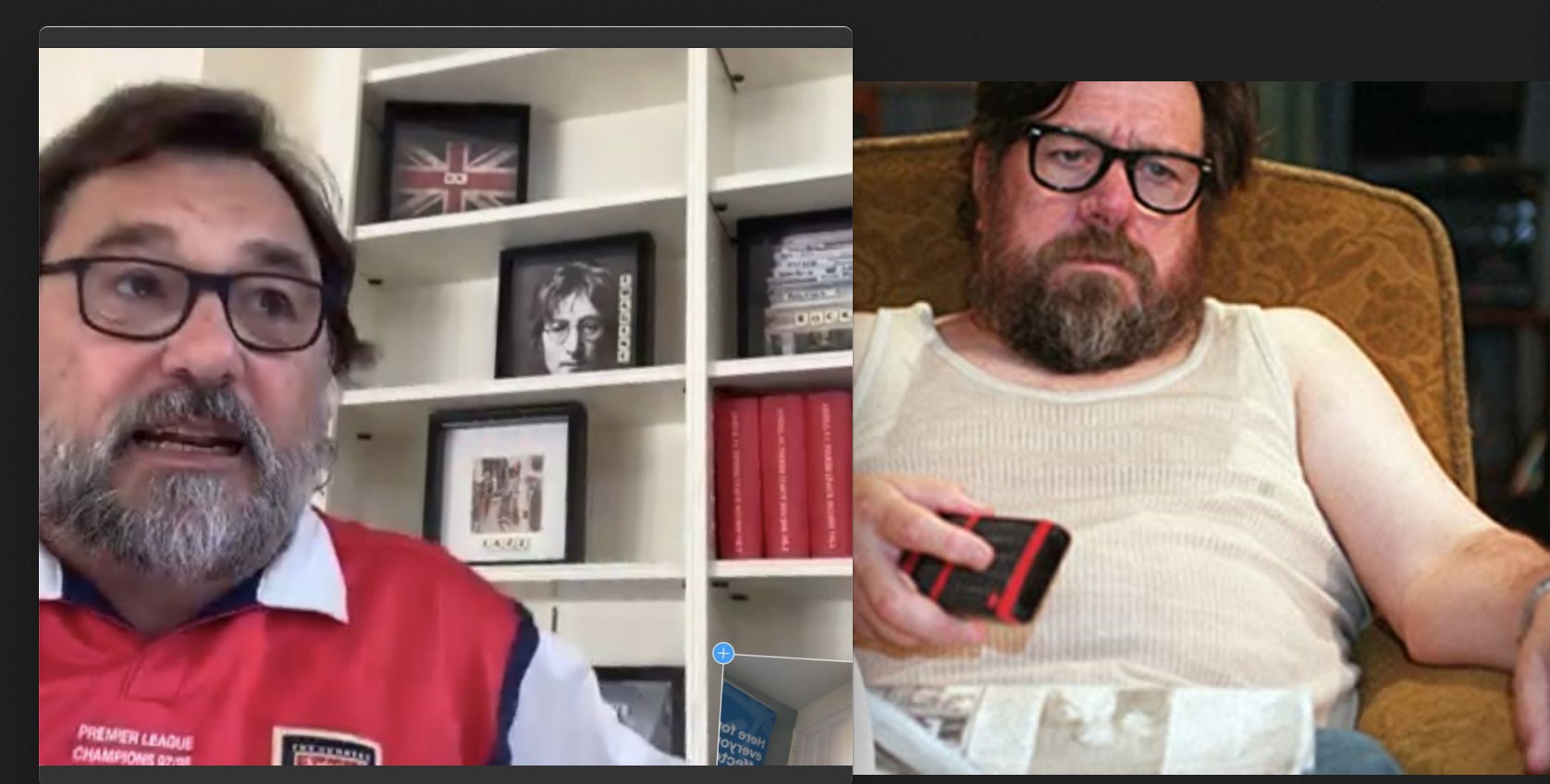 It’s always good to diversify one’s talents, and maybe when things get going again he pick up a lucrative sideline by joining one of those lookalike agencies where the lookalikes don’t really look that much like the famous person they’re supposed to be. He’d be a star because this is uncanny.

Also, having last week shaved off about four weeks worth of beard, I know where he’s coming from with his new ‘out of office’ look.

“My time in London is over, I hope you manage to find an agreement with Rome because my desire is to stay.”

Roma want to keep him apparently, but as nobody has any idea what the value of any transfer should be anymore, it’s all a bit up in the air. In January we turned down £10m from them, holding out for something closer to £25m – which always seemed unrealistic for a 31 year old whose career was in obvious decline. Now, £10m seems like pretty good money, but I doubt we’ll even get that if something does go through.

I saw some spurious Twitter reports that we were anxious to move him on because if he’d stayed he would have been due a significant pay-rise. I suspect, if true, it’s more of a loyalty bonus, fairly common in player contracts, but as one of our top earners already – only Ozil and Aubameyang take home more each week – this is something we could do without triggering.

To be honest, given what an absolute disaster the Alexis swap deal was, I wouldn’t be surprised if Ivan Gazidis agreed to a clause where Mkhitaryan was given part ownership of the club, half our broadcasting rights, his own private box at the Emirates in perpetuity (passing on from generation to generation), and an armoured van full of gold bullion.

Maybe if Roma can’t make a deal, Gazidis can bring him to AC Milan. Assuming he hasn’t destroyed the club by then.

Righto, that’s your lot for this morning. More from me tomorrow including a brand new Arsecast. Until then.

Previous articleMedics express concerns about football’s return, but what do the players think?
Next articleI might be wrong