Here we go again. Another week. I hope your weekend was good. I spent most of mine cooking things. Baking bread, making delicious ham to go in a ham sandwich with the bread. I even made my own butter. It was surprisingly easy, but not particularly cost-effective.

The sandwich was very good though.

I didn’t watch any Bundesliga at all, but I was sad to see Union Berlin lose the derby 4-0 to Hertha. [MANAGER NAME] needs to take a long hard look at himself after that. His decision to play a [FORMATION] was clearly the wrong one, and it’s probably wise if I don’t say too much about [DEFENDER] and [OTHER DEFENDER] at the back. As for the lack of firepower from [STRIKER] up front and chance creation from [PURPORTED CREATIVE MIDFIELDER], well I think we can all see there are big problems there. Let’s hope they can turn it around ahead of their next game against [WHOEVER THE HELL IT IS THEY’RE PLAYING*].

* They’re at home to Mainz on Wednesday.

As I do most mornings, I scour the news aggregators (websites, not the bazillion chaps on Twitter who all post every bit of Arsenal info they find anywhere) to see if there are any stories. Most of the NewsNow feed appears to be taken up with Pierre-Emerick Aubameyang. Not because he’s going to sign for PSG or Real Madrid or Barcelona, or that he need a haircut, but because he finished 16th in a virtual F1 race ‘driving’ for McLaren.

I’ve been watching this ‘Drive to Survive’ documentary on Netflix, which is a sort of behind the scenes thing about the Formula 1 seasons of 2018 and 2019. I’m a bit of a motor sport agnostic really. Back in the day it was something I watched a bit, in the same way you’d watch any sport that was on. Now, saturated by sports from every angle, it’s hard to keep up and I haven’t watched any in years.

It’s a fun show, the technical side of the sport is very interesting, and I’ve enjoyed seeing the drivers talk about how all they want to do is win but you can see that some of them don’t want to win as much as ram their own teammates off the track. Some of the spats they have with each other and their teams are great, and while I realise there’s an element of what we’re seeing being part of a scripted narrative for a TV show (after the fact obviously), it’s good entertainment.

Max Verstappen is 100% a Sp*rs player. Has anyone seen Daniel Ricciardo and Danny Karbassiyoon in the same room? While Romain Grosjean seems like the kind of guy who would find a tenner on the ground and then fall down a manhole while he’s celebrating his good fortune. The funniest thing though is the Haas team manager Guenther Steiner. Maybe it’s the way the show is edited but his ability to say the wrong thing or make a clumsy joke that nobody finds funny is quite extraordinary. On top of that, he sounds almost exactly like Nandor from the TV show ‘What we do in the Shadows’, which adds a layer of hilarity to everything he does. Anyway, it’s worth a watch, even if you’re not an F1 fan.

Elsewhere, the BBC transfer gossip story for this morning throws up this nugget:

Arsenal are to begin talks with Barcelona midfielder Philippe Coutinho’s agent. The Brazilian 27-year-old has spent the season on loan at Bayern Munich but the Bundesliga champions will not pay the £105m required to make the deal permanent. (Le10sport).

So, Bayern Munich are not prepared to spend £105m to sign Coutinho, and who could blame them? Obviously, the way the transfer market will be impacted by the Covid-19 crisis is going to knock a significant chunk off player values across the board, so I doubt we’d have to spend £105m to buy him if we really wanted him.

Just a sec, want to Google something: 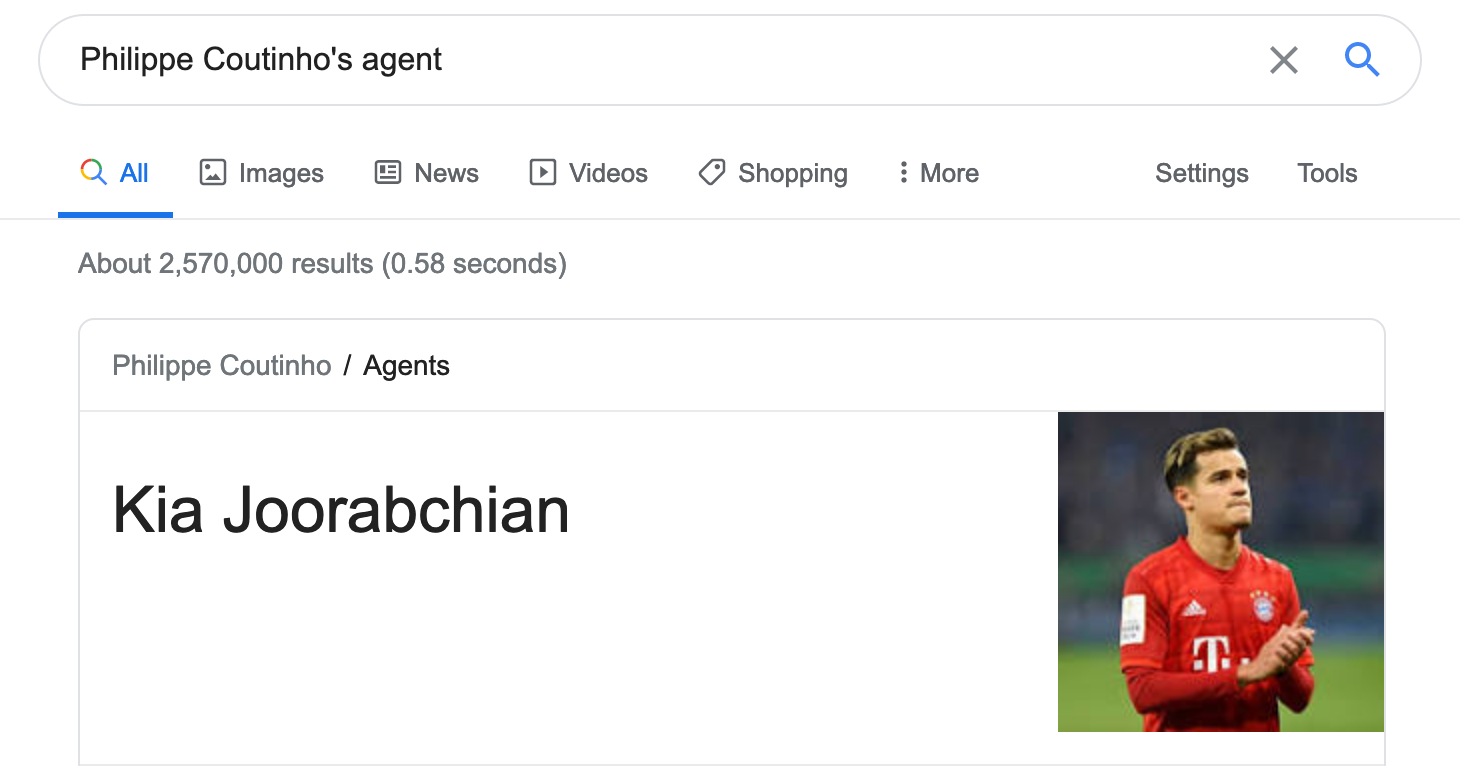 Ahh, it’s beginning to make some sense. Another ‘Kia Klient’ linked with Arsenal. How can it be that a man who watches games from our Director’s Box at the invitation of our Head of Football and Technical Director has such an influence on our rumoured targets? I wish I could figure this one out.

Am I saying that I think there’s something dodgy or illegal going on? Of course not. Would I be surprised if we signed every single player in Joorabchian’s stable, unveiling them with not at all sinister looking pictures? Not even slightly. Ok, maybe we won’t sign them all, that would make it obvious. Just most of them. On eleventy-seven year deals. As for Coutinho – even if he was within our budget – I’d rather we signed someone else. He’s obviously got some talent, but as a player he leaves me cold.

Right, that’s it for this morning. James and I will be recording an Arsecast Extra for you a bit later on. As ever if you have questions or topics for discussion, send to @gunnerblog and @arseblog on Twitter with the hashtag #arsecastextra – or if you’re on Arseblog Member on Patreon, leave your question in the #arsecast-extra-questions channel on our Discord server.

The podcast will be out for you around lunch-tim. Until then.

Previous articleOn this day: Arsene gets a kicking, departures and unpleasant signings
Next articleArsecast Extra Episode 350 – 25.05.2020