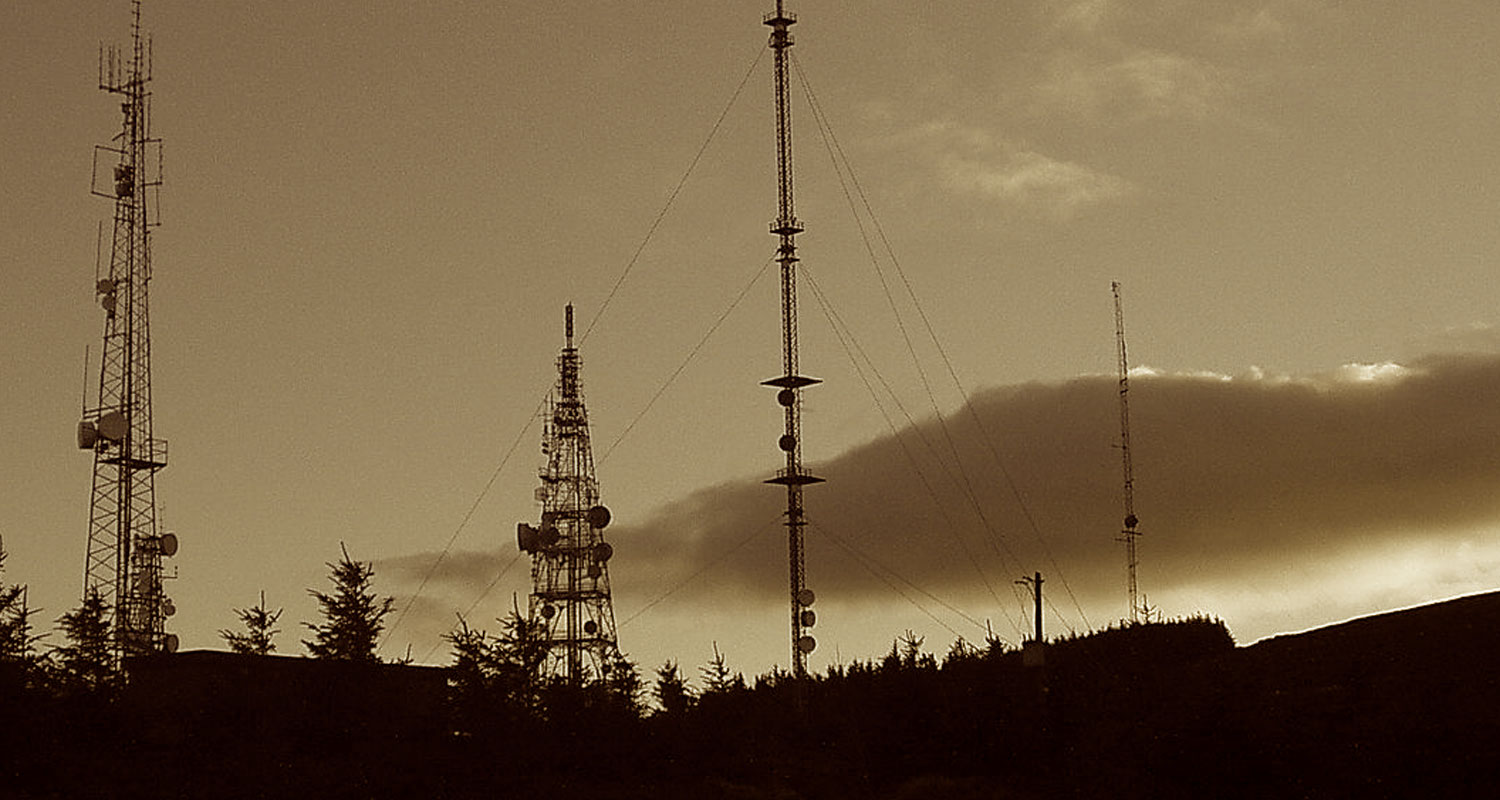 So we’re sitting in Daragh’s car. It’s really early on a summer morning – say 7am. Way too early to be up and sitting in a car up the mountains under normal circumstances, but when you’re in your early 20s and you’d only finished a gig in Club Marlay around 3am, it was ridiculous.

But then we were young and that wasn’t even the most ridiculous thing we were doing that day.

To set the scene, we were both DJs on what was probably Dublin’s biggest pirate radio station in 1994 – Kiss FM. We were on 103.2FM playing ‘hot hits’ and really quite popular with the 15-24 year old demographic (I didn’t know they were a demographic back then, just an age group).

Popularity is good, especially in the broadcast industry, but in this case it was very much a double-edged sword. All the pirates had been closed down in 1988 as the legal stations came on, but you can’t keep a good pirate down, and by ’94 the demand was there for something other than the boring by-rote stations brought to life by the IRTC (Independent Radio and Television Commission).

There were plenty of other stations, Sunset were big and dancey, if I remember, from somewhere in Sandyford, but Kiss began with guys I’d been doing radio with since I was 16 – up the mountains that summer. Daragh I knew from college, and a series of increasingly bad gigs we did together that once almost resulted in us being blown up when his car went on fire in Goatstown. We put it out with bottles of fizzy Ballygowan we bought from a nearby newsagent.

Kiss FM broadcast from above the Xtravision video rental shop on Whitehall Road. We had cart machines and a yellow pop shield on the main studio mic. On the other mic we had an old sock. We might even had had some bumper stickers made. It was fun and initially I was doing afternoons until I moved to the breakfast show at some point. You can see how much fun it was in the picture below. 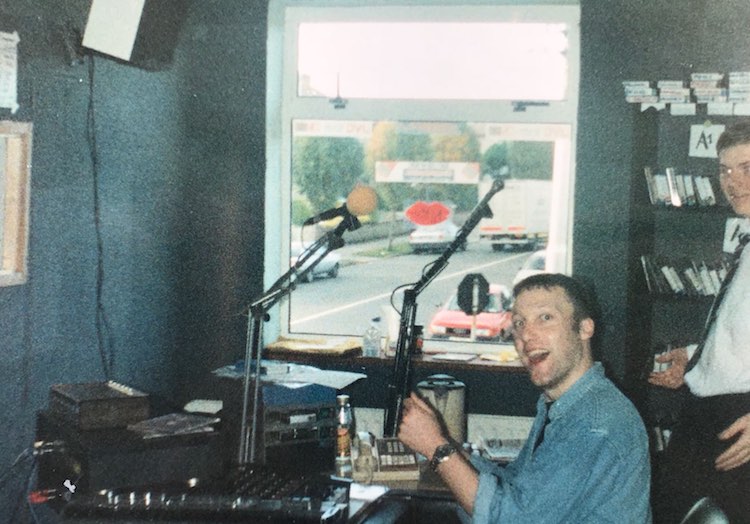 Around the time Daragh and I found ourselves up the mountain, I think I was still on afternoons. Anyway, the popularity of the station was such that one of the legal stations in Dublin – aimed at much the same audience – decided to jam us, i.e block our signal.

There are a number of versions of this depending on who you listen to, but the story goes that said station were doing the jamming from their city centre studios – but were also providing a nationwide news service to all the independents. One hour, at the top of the hour, the newsreader sat in the booth waiting to bring the latest headlines to all the radio stations taking the feed and got nothing but the music/noise they were using to disrupt our transmissions. As did all those stations.

After that, they were well and truly after us. They included the hapless jammers, the Department of Communications, the guards and various other disgruntled parties. Somehow, perhaps via a mole in the government or a relative of one of the station owners, we discovered we were going to be raided. Fairly standard for a pirate station – being raided was like some kind of initiation into the real world of radio.

“Now my son, having eaten the heart of that lion, you are a man!”

Except there was no lion and no delicious ventricular snacks for us to chow down on. See, it wasn’t the studios they were after. It was the transmitter, located off Mount Venus Road in the Dublin mountains. Quite how it was decided we’d all take turns doing shifts to keep an eye out is beyond me now, but we did and for some reason Daragh and I had the early watch. I suspect it’s because we thought they were talking a load of bollocks about the raid and we could at least be seen to do our bit while snoozing in the car.

So, we go and do the gig in Club Marlay, the nightclub equivalent of getting a Ronan Keating tattoo on your shoulder. It was the era of Cotton Eyed Joe and dance music with banjos in it. We played it all. There was no shame. There is no shame even now.

After the gig we went back to my house, at the foot of the mountains as Daragh was from the other side of town, slept for what seemed a few minutes, before waking up to drive up and keep an eye on the transmitter site – a barn at the back of a farmer’s house. We got coffee and possibly some apple Danish on the way. We parked the car, we sat there. We probably talked about what a load of stupid old shit this was and why the hell are we up a mountain at 7am on a Friday morning and there’s no way anything’s going to happen and then Daragh says, “Erm, what’s that?”

I stopped complaining and looked down the road. We were at the top of a hill and could see quite a way down.

“Well Daragh,” I said, “if I’m not mistaken that appears to be a number of police cars and some vans which I would suggest are driven by officers from the Department of Communications.”

We jumped out of the car, hopped over the fence into the farmer’s yard, and ran into the barn where the transmitter was sitting. We unplugged it, we took the cables out, we ran down the side of the mountain and before we got to the Pitch and Putt course we hid it in a load of very deep, thick gorse. We were very much out of breath because running at that time of the morning is not something we were used to. We were not athletes. We were quite unfit, very tired indeed, DJs.

We were also, I think it’s fair to say, overjoyed. We had outsmarted the police and the government! In your face people with authority and the power to arrest us. We’re too smart for you. Kiss FM won’t be silenced. The young people will continue to get what they want from their radio (when we get the thing hooked back up again of course), and there’s nothing you can do about it!

“Phew,” said Daragh, as something dawned on me.

Our plan to escape through the fence, through the Pitch and Putt course, and out onto the road was scuppered by the small issue of the vehicle we had left in plain sight and from which they could obviously get Daragh’s name and address. We brainstormed. We thought. We pondered. We mused over this plan and that.

And after careful consideration the best thing we could come up with was to walk back the way we came, stroll calmly past all the police and Department of Communications people, and if they asked us anything we’d say we were mountain walkers out for an early stroll. I was wearing ripped jeans and a David Bowie t-shirt. Daragh probably had on one of those woolly jumpers he always wore and some docs. Proper mountain walking gear, all right.

Still, that’s what we did.

“Where are you lads coming from?”, said the first Garda the moment we got in sight.

“We were just out for an early stretch of the legs”, I smiled.

“It is”, I said, trying to make my way past him and his two other Garda mates who had come over.

“There’s a difference between a mountaineer and someone walking in the mountains,” I declared most helpfully.

“Well you don’t look like either of them, ya feckin’ eejit”, he said, and he led us over to the Department of Communications.

They knew. We knew they knew. They knew we knew they knew. But now it was all about the dance. If we admitted anything, we’d lose the transmitter and it’d be a big setback for the station that we were both working at for free. I hadn’t mentioned the for free part? We were 23, and on the radio, it was all about the love of playing Whigfield’s Saturday Night on a 90 minute rotation.

They quizzed us this way and that about who we were, what we were doing, why we were doing it. One of the Gardai knew my father.

“What would he say if he knew you were up here this morning?”, he said.

“He’d think I was a bit of gobshite, to be honest, but he’d probably have a laugh about it.”

To be fair to the Garda, he laughed too. It went on like this for ages, more officials arrived. They had dogs. I don’t know why. Are there transmitter sniffing dogs? Someone from the Department came over to talk to us, but his gigantic mobile phone went off.

“It’s the 98FM Cash Call!,” I said, referencing one of those promotions where if your phone rang and you answered by saying the name of the radio station you’d win £1000, but he wasn’t impressed in the slightest.

Time went by, they knew they weren’t getting anything from us and that they’d have to let us go. They did give it one last try though, in fairness. The eldest Garda there brought us over to the fence, and we stood looking out over sun-kissed Dublin city on a beautiful summer’s morning.

“The World Cup. I bet ye’re are excited for that”.

We were. Ireland had qualified for USA ’94 and were gearing up to play Italy in their first game.

“It’s on in America, so it is. Great place that America, have you ever been?”, he asked, looking wistfully out at the city down below us.

We had. We told him so. He then turned to us both with a face of thunder, and bellowed, “WELL YE’LL NEVER BE ABLE TO GO AGIN IF YOU HAVE A CRIMINAL RECORD!”

I think this was the bit where he expected us to break down, our hopes and dreams of making a new life in Americay dashed by our heinous and unlawful transmitter hiding/mountain walking.

It didn’t work. They let us go and later, after we’d given the right people the coordinates of the transmitter, Kiss FM was back on air. For our reward we were given a 100% pay rise by the station owners and maybe, just maybe, we got bought a cod and chips from Borza’s on Whitehall Road.

It was the last time Daragh and I ever went mountain walking together. Once was quite enough.

Radio days: Silence is not golden … far from it