Perhaps the fittest I have ever been was the summer of 1988. Was this because I took up jogging? Was it because I trained extra hard for football? Was it because I ate well and dedicated myself to purity of body and mind, allowing myself to reach a zenith of health and well-being that was almost transcendental to the point where I could have become a fitness/lifestyle guru with my own range of VHS tapes to help people with?

No. It’s because I spent that summer cycling up a mountain to do five hours of radio every day. I told you before about my first radio gig, and that went on for a while every Friday night. I don’t remember this story, but apparently I got a phone call from a guy called Mike who had a radio station in his back garden. Did I fancy joining them? I did, as it turns out.

The offer must have been very enticing. Cycle every day from my house which is near the bottom of the Dublin mountains, to his house which was halfway up them. There I would present a radio show on Signal 106FM for five hours, 2pm-7pm Monday to Friday. I think that was the time anyway. Maybe it was 4-7, I can’t quite remember.

The payment terms were absolutely impeccable too. No pounds and no pence, but I would get my very own cassette with my DJ name voice-over on it. You know the one. The Top of the Hour jingle goes out like this on stations everywhere:

Then you drop in the DJ jingle so everyone knows who is playing the tunes.

Or, remember back then the DJs with the names like Sandy Beach, Max Power, Dusty Rhodes, Austin Tacious, Robin Banks, and, the classic, Rick O’Shea. Hi Rick!

Anyway, there’s a story. How do you choose your DJ name? I had to pick mine before I went on air at Radio Dublin. Because these were pirate stations – albeit it not as illegal as they would become in a little while when the government introduced legislation to outlaw them and award licences to radion stations – nobody used their real name. You had to pick a nom-de-plume-de-radio.

Mine was … Dave Adams.

Dave for David Bowie. Adams for Tony Adams. The perfect blend of music and Arsenal. When I think back now at some of the combinations I could have used based on what I liked to listen to and players of that era, I might have had some crackers. 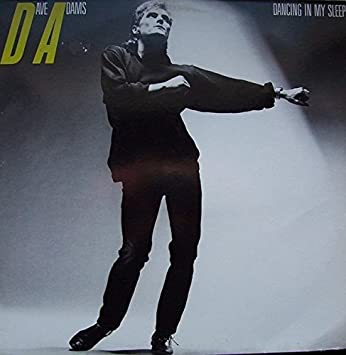 Audio production at it’s finest using two cassette players to create a kind of stutter, echo effect. Also, just to be clear, I did not release an album in the 80s under the same name. I saw this in HMV one day and I bought it. Not because I necessarily wanted it, but because of the name.

So, every day Monday to Friday I would cycle up to Mike’s house in the mountains. Because he was so high up a small transmitter meant we’d get huge coverage and we were able to cover most of Dublin, playing absolutely awful music but having a great laugh doing it. There wasn’t a lot of money to buy records, so being the enterprising young men we were, we got our hands on the latest pop hits by recording them off other radio stations.

I think it was Sunshine 101 at the time who did this somewhat extraordinary thing – in radio terms anyway – by playing songs start to finish without any real interruption. No DJ talking all the way over the intro up to the vocals starting, and almost fading out completely. So, with ghetto-blasters at the ready, and a host of BASF or TDK or MAXELL cassettes, we’d record the songs straight off the radio.

Now, you had to be a bit creative. For example, I remember that our ‘studio version’ of Sweet Child O’ Mine by Guns N’ Roses had be faded in because the start of it had a Sunshine jingle or something, and often you’d have to reset the counter on the tape deck and fade out the song before a certain point because it’d expose us as audio thieves. Those annotations were always on the cassette label. But, it was almost a heroic victory if you arrived in the studio with one of the newest releases for everyone to use.

Summer holidays in Irish schools are quite long, three months. So I spent every weekday cycling up the mountain on my trust Peugeot 10 speed racer, and that was hard. There were some steep bits, and one bit that didn’t look that steep but which had a steady incline for ages as you came around the corner. I hated that stretch with every fibre of my being. Ok, it wasn’t Alpe d’Huez, but still.

Going back down was much, much more fun, although when I think back on it now, functioning brakes on my bike would have been really handy because you could really get up some speed on the journey home. Shoe brakes are not the most effective, and being frank I have no idea how I didn’t do myself some serious injury considering the close shaves I had. Remember, this was the era of Sean Kelly and Stephen Roche, so you’d copy them, get your head low and WHIZZZZZZ down the mountain at a monstrous rate. Daft to think about it now, but as a teenager tremendous fun.

Given that this was over 30 years ago now, I don’t remember a great deal about it. I know there was one DJ there who always called INXS ‘Inks’, despite the fact people would tell him the real pronunciation. Is that the worst INXS related radio mishap of all time? No, this is, but it’s still funny.

That summer absolutely solidified my desire to be a DJ when I grew up. That was my ambition, to be a radio presenter on a big radio station, doing the talking and the playing the music and all that. Which I sort of did a bit later on, but obviously not forever, because here I am writing this. And here you are reading it.