Home Arseblog, the arsenal blog Smile, you’re on camera … ALL the time … 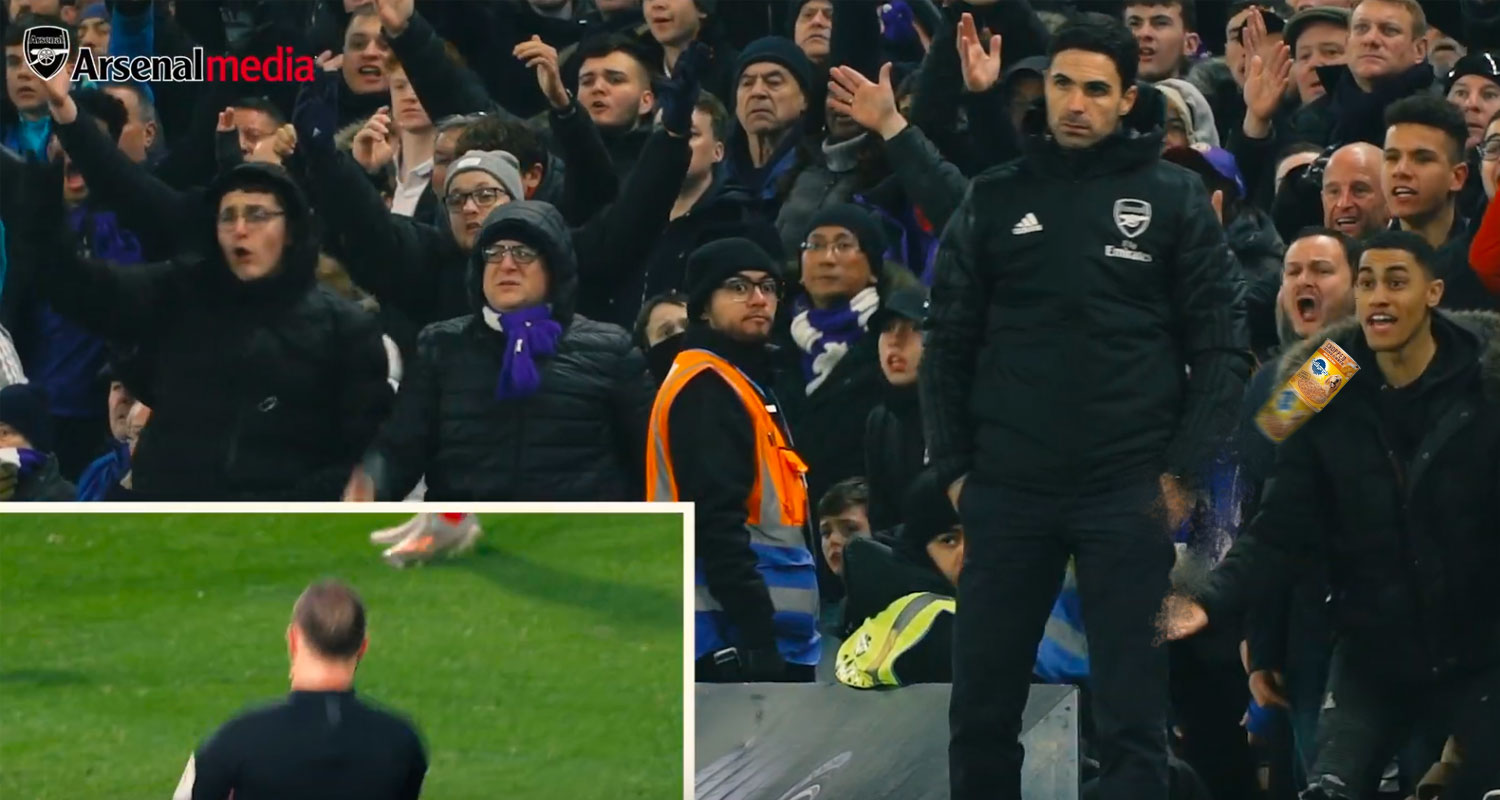 I was watching the ‘Bench Cam’ from the Chelsea game, and looking at Mikel Arteta’s reactions to the key moments in the game. When Shkodran Mustafi made the mistake which led to the David Luiz red card, he handled it far better than I would have. I think I’d have said WTF?! a lot, and then asked every member of my staff WTF?! and possibly even some of the crowd.

Here’s a fun game: watch the Chelsea fans behind him, then rate them individually from 1-10 in terms of how much you’d like Brad Pitt to throw a can of dog food in their face with all his might. There are quite a lot of 10s in there for me.

I guess part and parcel of being a manager these days is knowing that there is a camera on you pretty much at all times. Every time there’s a match and something happens, you know that the director in the TV studio is yelling ‘CLOSE UP ON ARTETA!’, whether that’s something positive or negative. You have to do pre-game interviews, post-game interviews – I’m pretty sure at some point they’ll try half-time interviews, although I have a vague recollection someone tried that already?

Even the training ground, once considered sacrosanct and a place where work takes place away from prying eyes, is now fertile ground for clubs to provide ‘hashtag content’. Of course we get a sanitised version of what happens, and I’m sure the manager has some control over what goes out and what doesn’t, but those behind the scenes videos of training sessions, rondos, nutmegs, and all the rest are popular so they’re not going anywhere.

I mean, I don’t know that some of the training ground videos did Unai Emery many favours to be honest, and it could be just me, but I don’t think they’re quite as frequent under Arteta as they were under his predecessor. If it is deliberate, I understand that. Not everything has to be on camera, you know. In much the same way as nobody really needs to see a video of some chump filming themselves watching a game of football, we don’t need to see every aspect of life at training.

It must take some enormous self-control to manage your behaviour as a manager though, particularly during the matches themselves. When even the slightest expression, grimace, raised eyebrow, gesture or reaction can instantly become a meme, there must be something going in the back of your mind at all times in terms of how you react. For the most part, Arteta tries to stay neutral when bad things happen (Mustafi, Luiz), although he did have a good shout at Pepe for not closing down a man at some stage, but is happier to be effusive when good things happen, like a late Hector Bellerin equaliser when he was just about to bring on Eddie Nketiah.

Now look at those desolate Chelsea faces behind him. Glorious.

Speaking of Pepe, he’s slowly beginning to have a bit more influence, and he spoke about the instruction he’s receiving from the manager:

The work Arteta did at Man City with the likes of Raheem Sterling and Leroy Sane has been cited as a positive when it comes to getting more out of Pepe. Right now he feels a bit like a diamond in the rough, you can see that there’s talent and potential there, but it badly needs polishing. There are promising signs though, and I liked how quickly he reacted to the break for Gabriel Martinelli’s goal on Tuesday night. Had he wanted or needed to, the young Brazilian could have slid the ball outside him for a Pepe tap-in.

There’s no question we’re a team that could do with more end-product from the Ivorian, but I think we’re starting to see a player who feels a bit more settled, and a bit more secure about his role. The price-tag weighs heavily in any discussion about Pepe, but even if we overpaid, that’s not on him. There are people on high who made that decision and who did the deal the way they did, adding to the cost.

Finally for today, Santi Cazorla has given his backing to Mikel Arteta as Arsenal boss, but leaving that aside, he will also have tugged on the heartstrings of every fan when he said:

I don’t know if it’s possible or not, but I want to play one more game for Arsenal before I retire. It was a deep regret that I could never have a proper goodbye.

Arsenal was the biggest club I ever played for. I’m proud that I was an Arsenal player. I’m especially grateful for Arsenal fans who supported me even after I left the club. I wish I can be part of the Gunners family in the future again.

I have no idea how you would make that a reality. I guess it would have to be in a friendly of some kind, but I’d love to see it. I can’t think of any player who deserved an injury less than him. The nicest man in football suffering the most horrific time with his ankle, infection, skin-grafts and basically two years out of the game. Maybe one day we can see him back in red and white, even if it’s just for 90 minutes in a game which doesn’t mean anything, it’d be a fantastic.

Right, I’ll leave you with a brand new Arsecast – that’s three in a week! With me to discuss Gabriel Martinelli and Edu is Joao Castelo-Branco of ESPN Brazil, then we go to Spain to talk Ceballos, Arteta, Auba to Barcelona and more with Alex Kirkland of @tsf_podcast. Listen/subscribe below.