Home Arseblog, the arsenal blog The murky world of transfers and the contact book as Arsenal target... 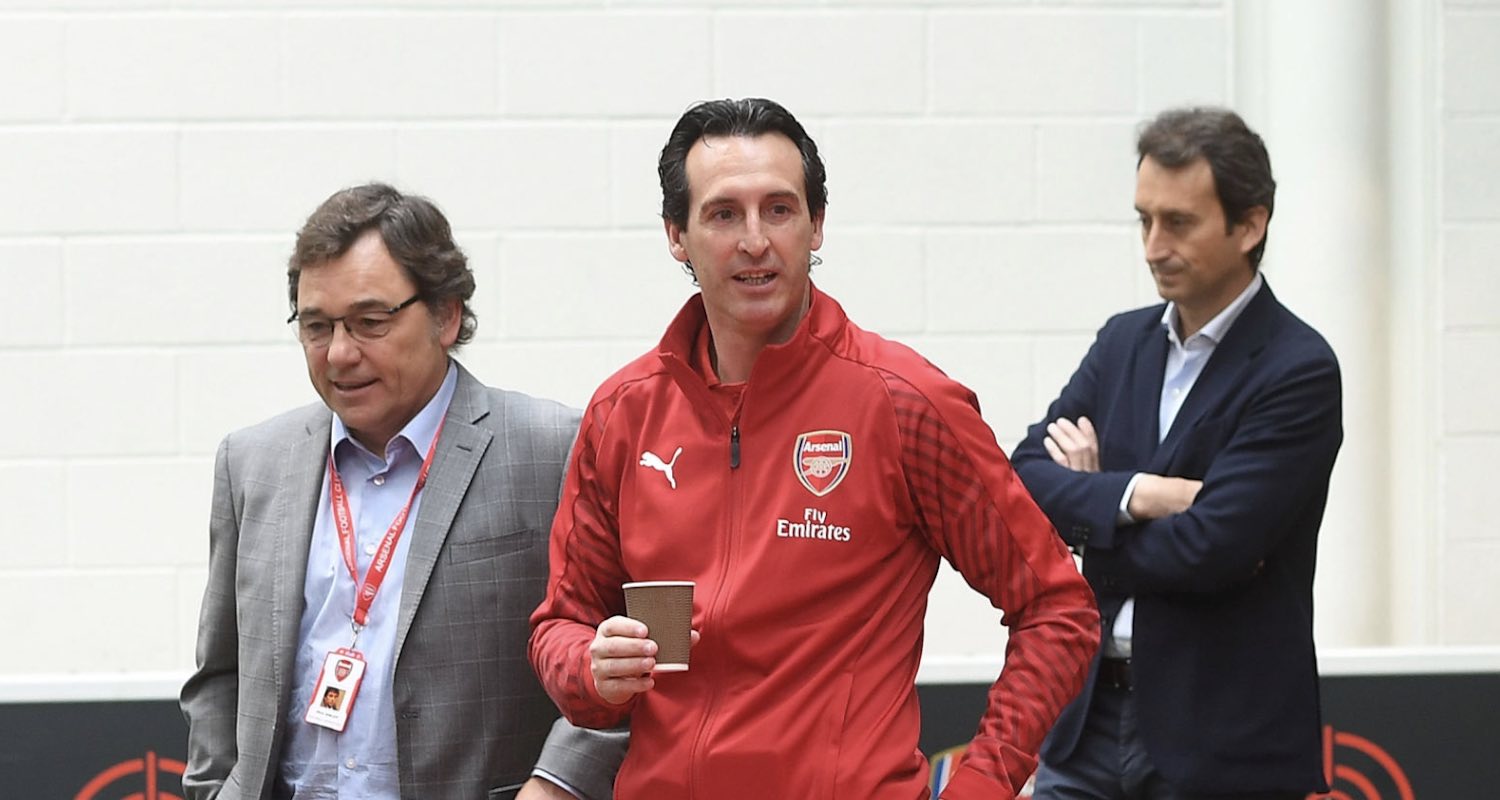 At his press conference yesterday, Mikel Arteta was asked about transfers and the possibility of signing players before the end of the January window. He is, it’s fair to say, fairly tight-lipped when it comes to this kind of thing. Few managers give any insight into negotiations or even their own plans, and Arteta is no different.

It might as well have been Arsene Wenger in the manager’s chair when he said:

I’m not going to be discussing any transfer links publicly. It’s something that we are trying to do internally and when we have news we will communicate with you guys.

He did suggest that since the injury to Calum Chambers, they had been thinking more seriously about a central defender, but didn’t rule out the idea of bringing in a players in other positions too. He then channeled his inner-Arsene once more, saying:

At the moment, I am 50:50 because this transfer window is very, very complicated. I only want to bring somebody in if I’m really convinced that he can really improve the level that we have.

I think we have to acknowledge there is a key difference between recruitment under Wenger and recruitment under Arteta. The former had all the power when it came to who we signed, when we signed them, how much we paid, and all the rest. Unless Arsene green-lit a deal, it didn’t happen. With Arteta, it’s not even close to being the same. Arsenal now have a Head of Football, Raul Sanellhi, and a Technical Director, Edu, and while the new boss might be able to have some influence over the kind of player we sign (midfielder, defender etc), he’s sort of at their mercy a bit.

What we do know about the set-up nowadays is that Sanllehi has the power. He won that struggle with our former Head of Recruitment Sven Mislintat, who has never been officially replaced by the way, and the contacts book approach is what is driving our recruitment. After years of eschewing their wily ways, Arsenal are in bed with the super-agents. For some reason it required the intervention of Jorge Mendes to get the Pepe deal over the line, despite two former Barcelona colleagues being in key positions at Arsenal and Lille to carry out the negotiations.

In recent weeks we’ve seen Kia Joorabchian’s brand new client Layvin Kurzawa linked heavily with a move to us from PSG, although it now seems we’ve dodged that particular bullet and he’s off to Juventus in a swap deal. There are links to a Ukrainian central defender, Mykola Matviyenko, a deal which is apparently being brokered by a man called Oleg Smaliychuk along with an agent called Arturo Canales (pictured above with Emery and Sanllehi).

It’s hard to find out too much about Smaliychuk other than he is now Valencia based, having previously been involved with Ukrainian side FC Karpaty Lviv as their Director General. If it’s the same man, he also lent his support to compatriot Roman Zozulya who was involved in an incident before Christmas which saw a game in Spain abandoned because of chants. The striker had joined Rayo Vallecano on loan in 2017, but after reports that he was linked with far-right groups in his own country, fans arrived at the training ground with signs, insisting they ‘do not welcome fascism or a recognised neo-Nazi.’ [source].

He never played a game for them, and when Rayo faced his current club Albacete in December, the game was called off at half-time because of ongoing chants about him from the stands. Smaliychuk wrote on Facebook, ‘Roman, don’t listen to fools who don’t have a damn idea about history, and don’t know how to defend their country.’

Working with him on this deal is a man called Arturo Canales, a close associate of Sanllehi. How close? Well, as Arsenal sought a new manager in 2018 after Arsene Wenger’s announcement, we were all surprised by the late appointment of Unai Emery. It wasn’t something anyone was expecting, and the late pivot came about in no small part because of Sanllehi. Canales was involved in convincing Emery to come to London for an interview, something he was reportedly not keen on as he felt other candidates had a greater chance of getting the job.

Remember, at that point Emery spoke no English, so the interview process would have been very much driven by the Spanish speaking member of that group – Raul Sanllehi. Gazidis was front and centre when the appointment was made, but make no mistake that the former Barcelona man’s influence over it was heavy when the former Chief Executive got 11th hour cold feet about appointing Mikel Arteta.

Canales’ agency, AC Talent, represents some big names in the game, including Gerard Pique, Samuel Umtiti, Ivan Rakitic, Xavi [note that Barcelona connection he shares with Raul], Shinji Kagawa and lots more. One of those players is a central defender called Pablo Mari with whom we were linked last night. Reports from Brazil suggest we’re actively negotiating with Flamengo over his transfer, and the fact he’s represented by Canales, Sanllehi’s pal, lend a lot of credibility to the story.

So, who is he? He began his career with Real Mallorca, but established himself at second division side Gimnastic. From there he got a move to Man City, of all places, but never played a game for them. Instead, he was loaned out to Girona (one of City’s feeder clubs); then he was packed off to NAC Breda in the Eredivisie; before spending last season with Deportivo la Coruna in the Spanish second division again. Last July he joined Flamengo for around £1m, and played 30 games across the Brazilian league and Copa Libertadores. He also featured in the World Club Cup final between Flamengo and Liverpool.

He’s 26, 6’3 and his agent is Sanllehi’s buddy. I suspect this might be one that gets done. The question is, does he fulfill the criteria set out by Arteta when it comes to his desire for signings who can improve the level we have? I can’t say, I don’t him well enough, but considering the squad we have, the depth issues at centre-half, and one particular error-prone individual, I reckon they could resurrect Genghis Khan, stick a red shirt on him, and Arsenal fans would embrace him as a new player.

At his age, having spent most of his professional career playing second division football, it feels like a bit of a risk. Perhaps he’s ready to blossom and flourish after what was a successful sojourn to South America, and is now about to take a significant step forward in his career. I very much hope that is the case if we sign him. Maybe though, he’s just a handy, relatively cheap option made possible because Sanllehi and Canales are so close. It’s not to say it couldn’t work out, but modern day recruitment ought to be a bit more involved than who you know. There’s a massive element of ‘what you know’ that we seem not to be on top of in quite a number of our deals.

Anyway, let’s see what happens. Some reports say he’s coming to England this weekend for a medical, and with the transfer window closing on Friday, not a great deal of time remains if we are going to give the squad a boost before then.

Finally, a quick note for people having an issue loading the News tab on the Arseblog app. We do have an issue right now. For Android, the solution is simply to update the app – it’s waiting in the Google Play store right now. For iOS, we’re waiting for Apple to approve an update, so bear with us.

It is surprising though that so many people actually forget there’s a website. It’s optimised for mobile too, so until we get the fix implemented, just use Safari or Chrome and visit Arseblog.News.

I’ll leave you with yesterday’s Arsecast. Lots to listen to, subscribe below or wherever you get your podcasts.

So far so good for Pablo Mari