The prospect of a new era, with a new man in charge, had Arsenal fans excited. Double winner and Invincible Freddie Ljungberg took to the Premier League as interim head coach for the first time and the excitement, nostalgia and all, was understandable.

The first potential hit to the buzz surrounding Ljungberg’s Arsenal bow came with the line up. Rather than continue with Unai Emery’s decision to omit Shkodran Mustafi and Granit Xhaka, Ljungberg opted to thrust both into the spotlight. There was also a place for Mesut Ozi alongside Alexandre Lacazette and Pierre-Emerick Aubameyang, plus the inclusion of Joe Willock, who worked closely with Ljungberg for the U23s last season.

Perhaps the inclusions were a pointed remark on the nature of a new start; a clean slate for players who had lost the faith of the previous regime. Perhaps not. What we can discern is that Arsenal have immediately been asked to play in a different way. 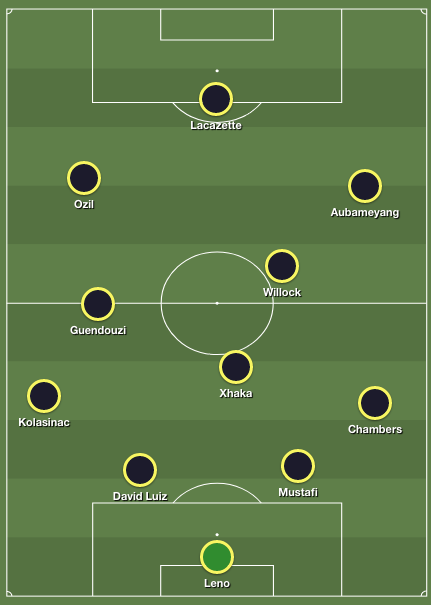 The start of the game was mostly promising from Arsenal, who played much less rigidly and much more expressively than under Emery. Effectiveness was another matter – spells of possession rarely led to chances, much less decent chances, against the league’s worst defence. But there was at least an intent to take the game to the hosts. Indeed, it was the 53rd minute when the side equalled their previous best tally for shots in a Premier League away game this season.

Combinations on the flanks didn’t always prove fruitful but were a clear feature before the break. Ozil or Aubameyang would drift inside, Kolasinac and Chambers would overlap, Guendouzi or Willock would drift outside to combine, as would Alexandre Lacazette. The fluidity was a welcome sight and it was no surprise with Ljungberg saying before the match he wanted his players to play with a smile.

Unfortunately, the approach only exposed a shaky defence. Chambers doesn’t have the recovery speed to get back into position after losing the ball, and was caught way upfield when possession was turned over for both of Norwich’s goals. His absence for the first goal only added to the confusion between David Luiz and Shkodran Mustafi as the hosts broke. Luiz was dragged away from his defensive partner by Teemu Pukki, while Mustafi was guilty of not closing the Finn down before deflecting the ball beyond Bernd Leno. It was only the second time the pair have started together in defence, the first coming way back in September in the Europa League, but Mustafi did little to convince his new boss that he deserves further opportunities.

Making the same mistake again for the second goal was criminal and Arsenal were behind at the break despite dominating much of the opening 45 minutes. Ljungberg probably plumped for Mustafi at the back because he is better than Sokratis on the ball. The Greek is not only cumbersome in possession, but he also often leaves others in trouble with his indecisiveness and clumsy technique. Mustafi’s presence actually helped Luiz play more confidently with the ball at his feet but the German’s defensive drawbacks are too pronounced for this to be a serious experiment – Rob Holding is both assured in possession and a more aggressive defender and should be starting games as soon as possible before Arsenal settle on a more long-term partnership.

The second half started brightly, with Arsenal dominating the ball and moving freely around the final third. Another goal came via another set piece, though, and getting this team creating from open play again will arguably be as big a focus for the new head coach as fixing the defence. From equalising until around the 80 minute mark, things got worse again. Norwich pushed on, looking to retake the lead, and Arsenal only encouraged them by retreated back towards their own goal. Escaping that pressure is tough ordinarily, it’s only tougher when the pressing and ball retention are both poor.

After a surprising first substitution (Torreira on for Willock) hadn’t helped, Ljungberg rolled the dice and introduced Bukayo Saka for Matteo Guendouzi. After the first sub seemed a little negative, this change helped wrestle back some momentum for a few minutes, even if that didn’t last, and should earn Ljungberg some credit. Like Willock, Saka played for Ljungberg regularly last season and understands what the Swede wants – using him over Nicolas Pepe probably should not be analysed too deeply just yet.

On the whole, Bernd Leno kept Arsenal in the game but the team were a little unfortunate to conceded from both of Norwich’s half-decent attempts in the opening 45 minutes. Taking a quick glance at the stats shows that there’s plenty to be encouraged by after a more ambitious performance than we have become accustomed to.

Arsenal have already had more shots today than they have managed in any other Premier League away game this season (12).

As per Understat, Arsenal racked up their second best xG (1.96) total of the Premier League season and restricted the opposition to under 1 xG for just the fourth time. The team went to Carrow Road off the back of seven games without a win. Away from home in the Premier League it was one win in the last six, five in the last 19, 12 in the last 44.

Ljungberg had one training session with the full squad and failure to immediately buck that particular trend is no reason to write him off already.

Emery had 18 months and made the team considerably worse in every aspect. Freddie has had one training session. Please relax.

“Normally pre-seaosn is five, six weeks and you can implement how you want to play football But I don’t have that,” the Swede said in his post-match press conference. Arsenal face Brighton and West Ham in the Premier League next before a match against Manchester City looms large.

“I just try to do small building blocks and change things in a slow tempo so people can understand and practice. Now the players need to recover and we’ll probably get one and a half sessions (before Brighton) but that’s football.”

This is no easy task and Ljungberg in particular is caught between a rock and a hard place. His aim as an Arsenal man and as the interim head coach is to look after the long-term prospects at the club. At the same time, whatever method gets results in the short-term would give him a better chance of keeping the job.

His remarks on the captaincy before the match suggested he did not want to unsettle an already unstable dressing room, meaning selecting the likes of Aubameyang, Ozil and Lacazette was the easy option. The same goes for using Willock and Saka, who is already familiar with and who should have a good understanding of his demands.

Lucas Torreira almost nailed the fairytale ending but his volley deep into stoppage time was blocked and Ljungberg will go on to Thursday hoping to end Arsenal’s winless run at home against Brighton. Hopefully then we see better protection against counter-attacks and an improvement in creating chances in open play. Ultimately, turning this run around with this squad midway through the season appears to be an unenviable task and patience will be required no matter who ends up in the dugout.

At least for now, Arsenal seem more prepared to take the game to their opponents and somewhat forego their defensive frailty. With a top heavy squad, it’s something many asked Emery to do and an approach that seems unlikely to change much as long as Ljungberg is at the helm.