Home Arseblog, the arsenal blog Freddie’s ambition to be a transition tactician 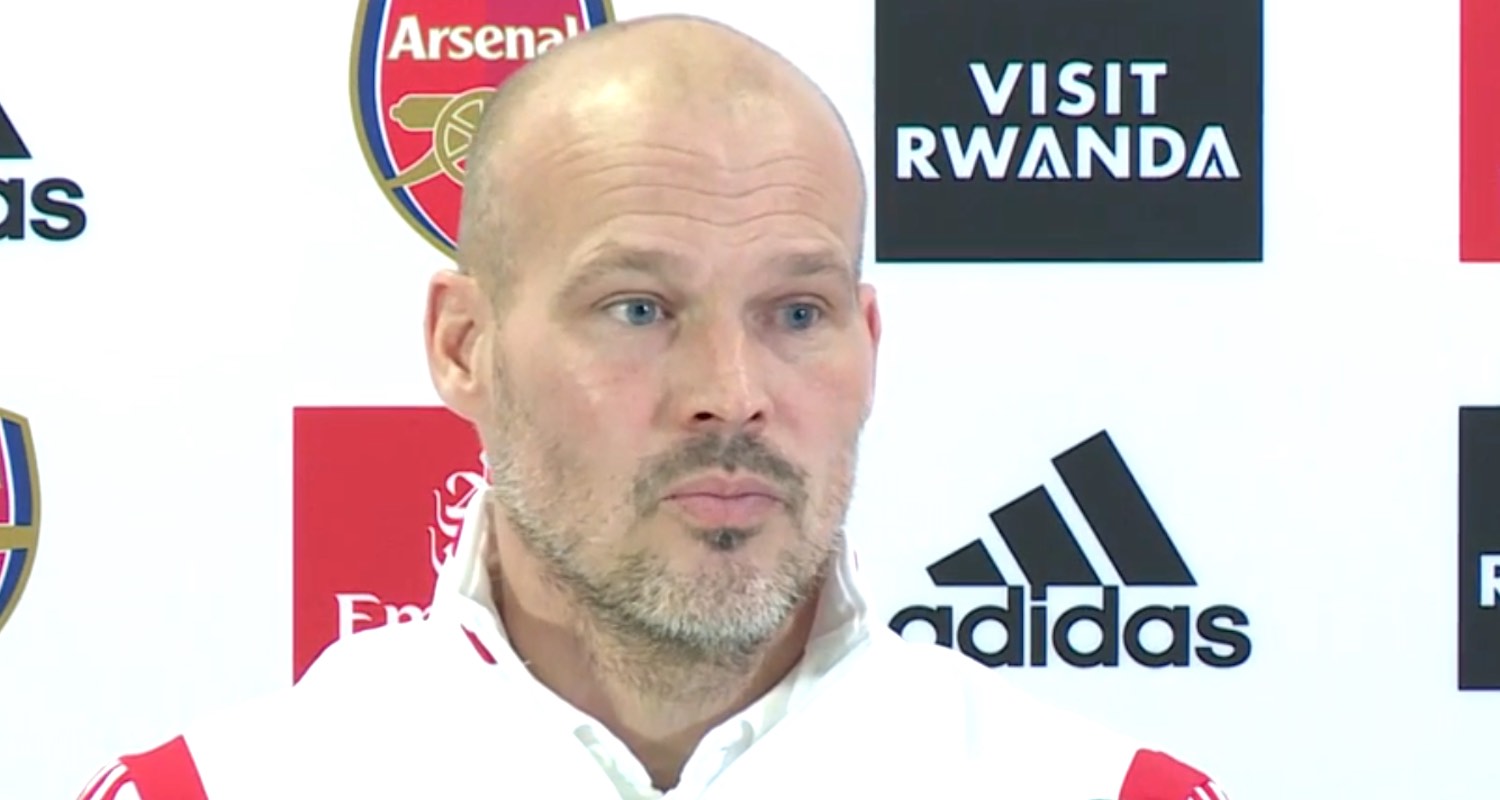 It’s interesting hearing Freddie Ljungberg talk about what he can and can’t do with this team, given the short space of time he has to work with them. Under ideal circumstances, a new coach has at least got a pre-season to drill players on the training ground, and put into practice those things in friendly matches.

The nature of his appointment means that’s not a luxury he’s been granted. It doesn’t mean there aren’t things that need fixing. Oh boy, we know there are plenty of those, so it begs the question what can he realistically do to turn performances and results around?

Having watched the game again twice (video analysis!), he’s identified the key issue as he sees it, saying:

The main thing I saw in the game is that we let them get into situations where it was just a sprint. It was not about football or technical stuff, they just went in a competitive sprint with our player.

We want to stop that, so that’s something we will focus on.

The question is how exactly we’re going to do that. It’s interesting to look at the Norwich goals at the weekend and take note of where we lost possession. See below. 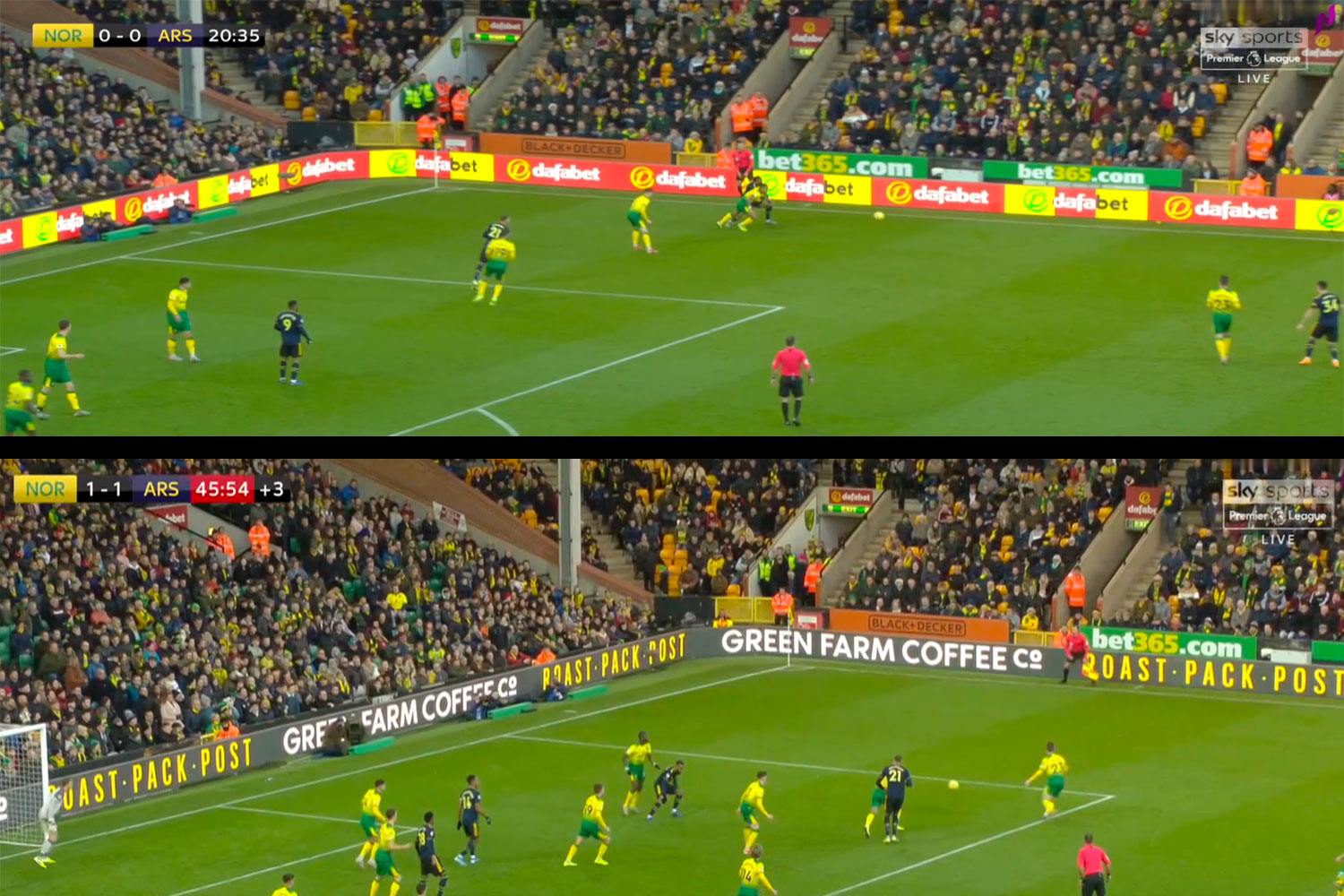 The first saw Norwich reach their centre forward deep in our half with just two passes. What more could we have done in that passage of play? If you watch again you’ll see Chambers make a run into the box looking for a pass from Joe Willock that not even Lionel Messi could have made, so while we all love a full back with attacking intent, pick your moments better to start off with. I also think our midfield could have done more. Xhaka, in fairness to him, picks up the pace as the pass is played to Teemu Pukki, but he potentially could have done more to prevent the ball being played as comfortably as it was.

Meanwhile, Matteo Guendouzi backs off and backs off, never engages or tries to make a tackle. He ambles back at the same pace, a sort of half-canter, but never breaks into a full sprint which would have seen him at least crowd out the space with another body. We talk a lot about players commitment to their jobs, and in this case he didn’t do enough. This isn’t to pick on him or anything like it, he’s a 20 year old player of some potential, but at this level if you do something at 75% you’re likely to get punished and it’s something that’s easy for him to improve on.

The second is a bit more complicated, but again it begins with Chambers somewhat tamely losing possession deep in their half. That can happen, and I don’t think he had much on in terms of a safe pass to keep the ball anyway. He tried to do something in the box, it didn’t work, but that’s not uncommon in an attacking phase of play. It’s what’s next that I’m sure will have Freddie thinking long and hard about what to do with these players on the training ground.

One pass takes out four Arsenal players who crowd around him to stop it. They don’t, so we’re immediately turned. The space where Chambers should be is there to be exploited and they do that well, but Cantwell does exactly the same with the space where our midfield should be. Xhaka and Willock were bypassed by the initial ball down the line, Guendouzi is covering a different man, so the goalscorer has plenty of room to run into. The defending from Mustafi when he gets into that position is poor too, I’ve never seen a goal prevented by a player collapsing and making themselves smaller.

On the Arsecast Extra this week we spoke about the lack of one on one defensive ability in this squad, and that was a true example of it. We’ve seen countless times that a forward need only flutter their eyelids at our centre-halves to make them fall over. Firmino’s goal last season at Anfield was a classic example of that. Look at the way Sokratis and Mustafi are undone by the kind of skills any half-decent Sunday League footballer possesses. See how he bamboozles them by slowly switching the ball from one foot to the other.

Which isn’t to say our defenders shouldn’t do better in those situations, of course they should, but the reality is they’re not very good at it and they’re unlikely to get any better barring some kind of early Christmas miracle (please help us Football Santa!). So it becomes a question of how much more can we do to prevent those situations. You could argue that Xhaka and Willock could have run harder to get back, perhaps that would have prevented it, but was there room for a so-called tactical foul earlier in the build up? It’s not as if we didn’t react when we lost possession, but what we did was nowhere near aggressive enough to stop Norwich getting the ball forward and ultimately scoring.

Thinking about it from the other perspective is also interesting. Had we scored that goal, we’d have spent ages talking about the fluid, flowing play, dynamic running and clever  football, so I think we do have to give some credit to Norwich for what they did and the way they took advantage of our lack of defensive solidity. Nevertheless, as we prepare for Brighton on Thursday, I’m sure Freddie’s thoughts are about what more his team could have done to prevent those goals.

I really think we’ve got to find a place for Lucas Torreira in our midfield as part of the solution. Let’s put an end to this idea of playing him higher up the pitch to get him close to the box. It is something he can do, his late chance on Sunday showed that he does have instincts in that area of the pitch, but we need someone to do a job deeper and in the current crop of players we have, he’s clearly the one most suited to it. He does it for Uruguay, there’s no reason why he can’t do it for us.

I also think that Freddie’s desire to play with greater possession and higher up the pitch – thus keeping the ball as far away from our defence as possible – is the right way to go. Under Unai Emery we invited so much pressure and attempts on our goal that conceding felt inevitable in almost every game. It seems easier to try and get the team more switched on to do what we do when we lose possession than to vastly improve the defence with the quality of defenders we’ve got, so it’ll be very interesting to see what we do tomorrow night against Brighton.

Finally, a quick plug for some superb Arsenal related prints if you’re seeking a Christmas present for the Gooner in your life. Check them out here.

Ok, that’s your lot for this morning. Back tomorrow with a preview of that game, of course, and all the news throughout the day will be on Arseblog News.

Pep on Arteta to Arsenal + what Freddie has done well