Home Arseblog, the arsenal blog Take no risks against Vitoria + Xhaka and a timeline of a... 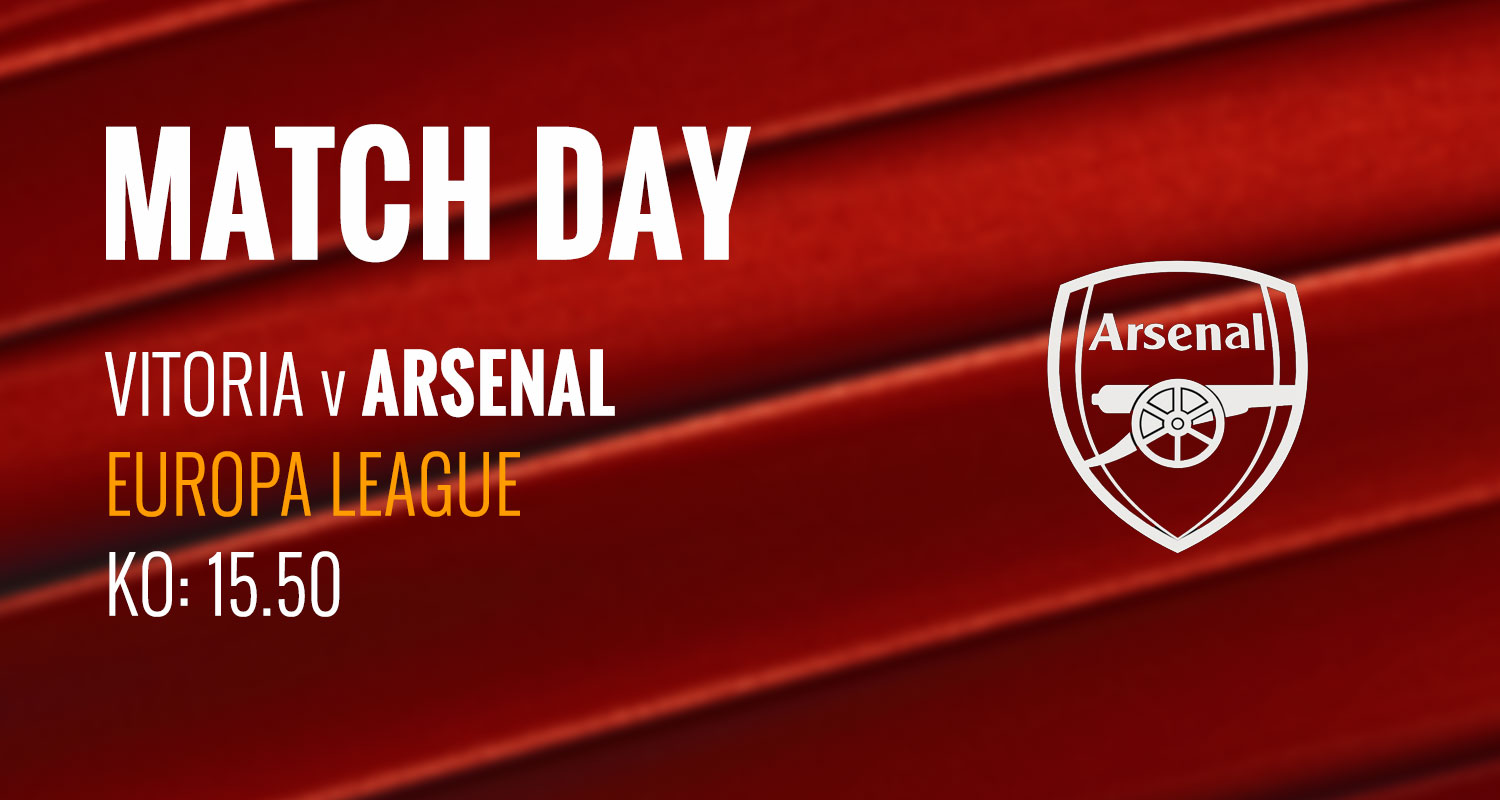 Because of two other games taking place on Thursday, and to avoid clashing with the Champions League, today’s match kicks off at 15.50. Not exactly ideal for the UK audience, but then this is the banter competition and they’ve bantered us right off with this one. Not to mention it’s our own fault because we shouldn’t be playing in the Europa League this season, but hey-ho.

Mesut Ozil, David Luiz and Pierre-Emerick Aubameyang have not made the trip, as they’re being rested ahead of the weekend’s trip to Leicester, while Granit Xhaka remains sidelined after last week’s shenanigans. More on the ex-captain anon, because we’ve finally made a decision there.

As for tonight’s team, I’d be inclined to use as many players as possible who wouldn’t necessarily be in the starting line-up for the weekend. So, I’d go something like this:

Nicolas Pepe is in the squad, don’t risk Nicolas Pepe in this game. Lucas Torreira is in the squad but, as Xhaka will likely remain unpickable for Leicester, don’t play Lucas Torreira. Or Matteo Guendouzi. Or Alex Lacazette. Basically, pick a team this evening that will give us the best chance to win on Saturday, a fresh-legged team that doesn’t include players who have spent energy on a game which, frankly, means very little in the grand scheme of things.

A win would guarantee qualification for the knock-out stages, but even without it, we have a home game against Eintracht Frankfurt who we’ve beaten 3-0 already, and a trip to Standard Liege who we beat 4-0. It’s too early in the competition to start working out who we might face even if we stumble over the line by finishing second in our group, but even so I’m not sure we should be that worried either way.

The three points tonight are trifling compared to the three points on Saturday. Our state of the art graphics department has created this handy image to illustrate the difference:

Which is to say that while I hope to see an exciting performance from some of our talented young Gunners – as we have in some of the previous rounds – I don’t want us to do anything which might put at risk our best team for Saturday. You’ll notice that there’s no Hector Bellerin in my selection this evening, because I’d be inclined to play him against Leicester. I don’t think Unai Emery is of the same mind, and I fully accept he has more info and data available to him, but if Hector can do 90 minutes tonight, he should be able to do it at the weekend in a game where his quality is more important to us. He’d then have a full Interlull to recover.

Update: That whole thing is irrelevant because Chambers hasn’t travelled, so Hector is likely to start. Which I think he would have done anyway, so I just wasted a load of words. Oh well.

I know the last round against Vitoria was not quite as easy as people had expected, and we were rescued by Pepe’s late, great free kicks for which he was thoroughly punished by being left out of our last Premier League game, but a young team, bolstered with some experience, should be capable of doing the job tonight. And if not, Emery has brought players with him who could help rescue it if we really need it. Let’s see what happens.

If the kick-off time makes it impossible for you to see the game, because you’re stuck in work, or picking up the kids or whatever, remember you can follow it on the Arseblog live blog which will keep you right up date.

Right then, Granit Xhaka – and the Swiss international has been stripped of the captaincy, and is no longer part of the ‘leadership group’. Emery revealed this in Portugal last night, a mere eight days after the incident against Crystal Palace took place. He said:

Pierre-Emerick Aubameyang is now the official club captain, we’re down from 5 captains to 4, which is a bit of worrying trend: if we continue to lose captains at the same rate we’ll be down to just one by the end of the season. Joking aside, I think it’s the right decision given the way that Xhaka behaved. Regardless of the provocation or the hurt he felt, which I can understand, you can’t behave like that as the captain or Arsenal or any football club and expect to keep the armband. He made his position untenable.

I do think the entire captaincy thing has been woefully handled this summer by Emery though. Let’s look at a timeline of events quickly:

July 11th: Laurent Koscielny, a stalwart of nine seasons and a very popular player within the squad and with supporters, torches own Arsenal legacy by refusing to go on the tour of the US. With hindsight, and some time and distance, you have to maybe read between the lines a little about why he’d have been prepared to do it in such a clinical way, knowing what it would mean for his relationship with the club and fans after such a good time over the years. He is not immediately stripped of the captaincy.

Within a week though, stories about the captaincy begin as it becomes obvious the Frenchman isn’t going to stay, and we need to find somebody new. We then get a series of delays as Emery refuses to make a decision:

July 19th: Emery wants an Englishman as one of his captains

September 26th: Emery gets squad to vote for their preferred captains

September 27th: Xhaka confirmed as captain along with Aubameyang, Ozil, Lacazette and Bellerin as part of the ‘leadership group’.

November 5th: Xhaka stripped of captaincy after just 39 days, making him the shortest serving captain I can remember.

So, between the time that Koscielny’s position as captain became untenable due to his refusal to go on the tour, and the appointment of Xhaka, there were 78 days. It took Emery over 11 weeks to make his mind up, and while I’m not excusing Xhaka’s actions last week by any stretch of the imagination, the prevarication and indecisiveness played a significant part in what happened.

People’s frustrations with Xhaka as a player were rising. He was heckled by fans away at Watford, and we had a precursor to the Crystal Palace events when he was taken off against Aston Villa at home. I was at that game, the reception to his withdrawal that day was verging on unpleasant, and to anyone with a lick of common sense, it told you that you were asking for trouble if you made him captain in that context.

There was an easy out, and that was Aubameyang who would have been a popular appointment, and one to calm the waters a bit. There was no reason why Xhaka couldn’t have been one of the five,  just not the main one. But Emery, having let the situation fester, gave it to the Swiss international, and that went a long way to creating the atmosphere which led to him being cheered then booed last weekend, and prompting Xhaka’s emotional but unacceptable reaction.

We know that Xhaka himself was frustrated at how long it all took, and it’s hard not to think that had Emery just made him captain straight after the Koscielny thing, the relationship wouldn’t have broken down this badly. There would have been frustration with him as a player, which is normal, but I don’t think he’d have become quite the same lightning rod he has for the job the manager is doing.

Even then, it’s taken over eight days to sort it out. It took four days for Xhaka’s statement, which didn’t do a lot to ease the flames, and all in all it’s been a complete fudge of a situation from start to finish. I also wonder if this decision was ultimately taken by the higher-ups, because based on what we know of Emery it might have taken a few more weeks of equivocation or another player vote before he did something himself.

It’s done now … eventually … but the whole thing has reflected poorly on all concerned. It’s also so very Arsenal that we’ve now given the armband to player whose future is somewhat in limbo due to the fact we want him to sign a new deal and so far he hasn’t been willing to do that. Should we fail to make Champions League next season, chances are he’ll push for a move in the summer, meaning we could be faced with losing three captains in less than 12 months. Mental!

As for Xhaka’s future as a player, I’ll let you decipher Emery’s own words as best you can, but hopefully we can put this behind us as much as possible, because there are more important things to worry about – starting this weekend against Leicester.

Right, that’s it, catch you later for the game.