Home Arseblog, the arsenal blog Leicester 2-0 Arsenal: The board are not doing their job properly if... 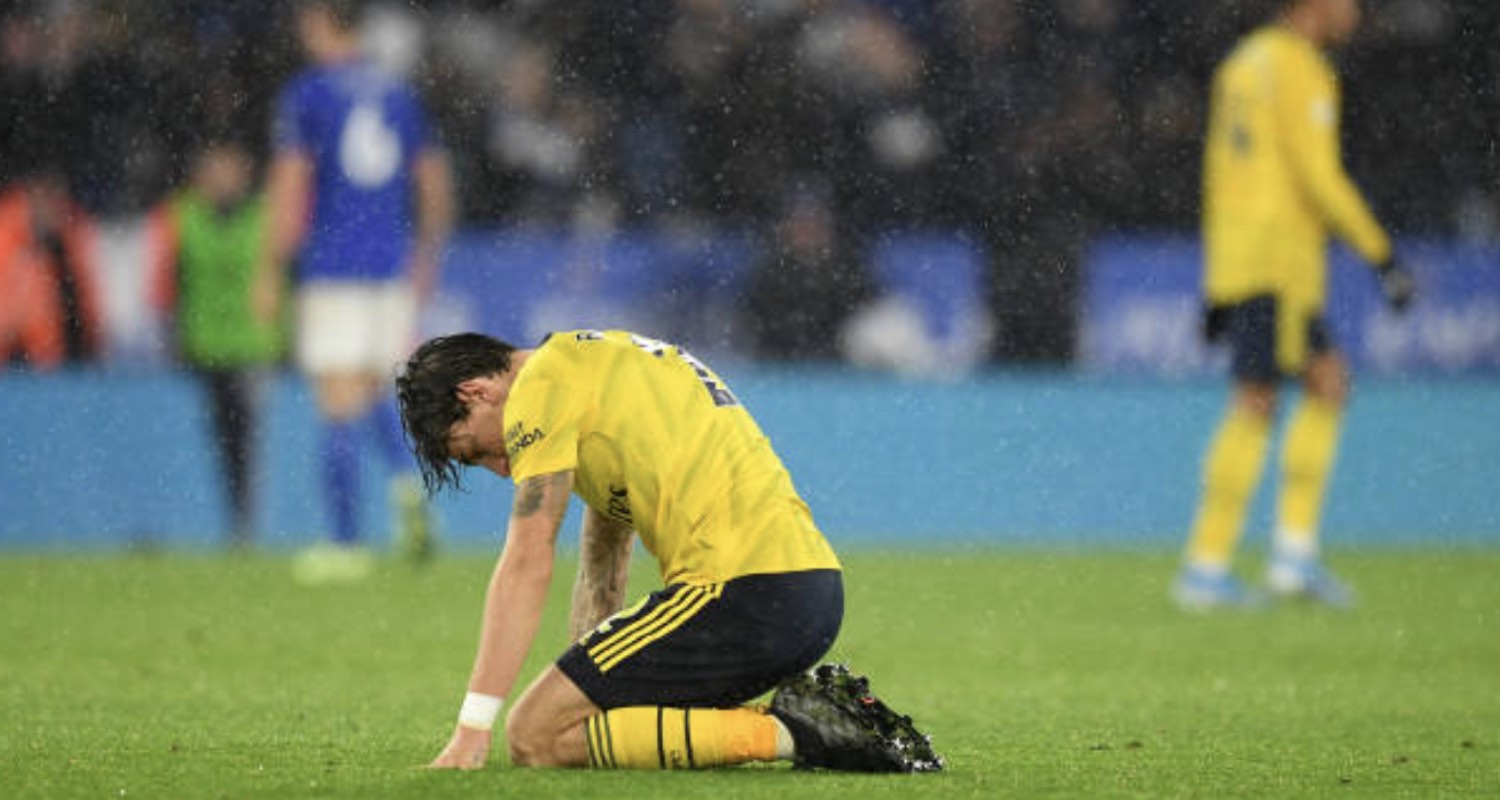 “When they scored the first goal, that’s when we lost the opportunity to do something in that match.”

So said Unai Emery after our 2-0 defeat to Leicester. There are many things we can be critical of when it comes to the Spaniard right now, we’ve been over them all before, but this really stood out to me. The Arsenal manager is saying that because Leicester scored the first goal, that was that. The game was done.

This is a man whose team has demonstrated more than once in the not too distant past that taking the lead, even having a two goal lead, isn’t enough to take three points from a game, so this self-defeating, loser mentality is hard to take. If that’s what he feels, is that what the players feel? Or at least what he transmits to them?

To be honest, when they scored the first and then the second a couple of minutes later, I feared the final scoreline would be worse. There’s no credit in keeping it two just a two goal defeat, but it’s telling that I thought we might completely and utterly collapse in the final stages of the game. We are so brittle we have footballing osteoporosis.

Let’s do a bit on the game, not that it matters that much. In comparison to some of the performances of late, there were some encouraging moments, some passages of play where we looked like we knew what we were doing. We seemed a bit more comfortable defensively with the back three until such time as we didn’t, while our two strikers were deployed in a strange way, and Mesut Ozil was in the game.

We had some chances. Lacazette screwed a shot wide which many think he should have scored but I think the defender would have blocked the effort if it was on target. There was the disallowed goal which Aubameyang should have done more to stay onside for, and a Bellerin shot which skidded just over the bar in the second half. That was in the 53rd minute, that was also our last shot of the game.

I guess it’s a measure of how far we’ve fallen that yesterday seemed like something better, because when you break it down, it wasn’t good on any level. Each week, Emery is producing performances which break records statistically. Again, with thanks to @Orbinho of Opta, some highlights:

We have now won just two of our ten Premier League games. We sit eight points off the top four (Man City in 4th who play today), and nine off Chelsea and Leicester. After twelve games of this season we have a negative goal difference.

What are we waiting for?

What worries me slightly is that yesterday Emery did a long interview with Sky Sports, in Spanish so he could express himself fully, and it was mind-boggling in places. He insisted last season was a good season despite the fact it so very obviously wasn’t. He blamed ‘circumstances’ like the Koscielny, Ozil/Kolasinac, and Xhaka situations as reasons why his players don’t have ’emotional balance’, which is necessary for the team to perform at its best apparently.

Most irritatingly, he spoke about needing patience with young players, and for me this is a manager hiding behind them to excuse his own shortcomings. I think we can all understand that talented Academy players are going to be inconsistent at times, that their development is obviously more demanding, but to come out with it again after the defeat to Leicester is verging on cowardly. This wasn’t a team of young players, it was entirely made up of established first team players, and they still lost.

What worries me most is that he sounds – to me at least – like someone who feels confident and secure enough in his job to talk like that. As if he’s had reassurances from on high that despite the fact our season is going down the pan, he’s safe. I sincerely hope that’s not the case, because if it is we’re in big, big trouble. Emery is done, toast, a busted flush, and anyone who has eyes can see it.

Look at results, look at performances, look the players body language, look at his face as he grimaces on the sideline unable to do anything as more Premier League points get flushed down the toilet. Look at a man who says his view of what Arsenal are doing right now is ‘realistic’, as if we’re all living in some fantasy world where it’s crazy of us to expect more than two points from the last twelve. I think he truly believes that he’s doing the best possible job with the squad he’s got, but here are our last 19 Premier League games across last season and this:

That’s under-performing. That’s not good enough for a club like Arsenal. That’s the kind of form that gets a manager the sack. And yet last night Emery’s message was:

My message to everyone at Arsenal would be to stay calm because we can improve. I am speaking with the club to stay calm and to stay patient to improve and recover some confidence with some circumstances. We have young players who are improving and growing up with us.

If we can improve, why haven’t we before now? The young players are not a shield to hide behind, because this form is a continuation of last season when he had far more experienced options available to him and still contrived to miss out on the top four from a position where it was basically a sure thing. He is, frankly, talking out of his arse, and the fact that there’s barely even the slightest acknowledgement of how bad we are is frustrating.

We can measure it via stats, via Premier League points, and understand that this is not working. The numbers tell us that categorically, but leaving all those things aside, what do your eyes tell you? What does your gut tell you? You all watch these games, same as I do, and I know a broken team when I see one. If this was happening at any other club, particularly a so-called rival, I’d be full on Emery In forever, to see what kind of destruction he might wreak upon them. It reminds me a little of Mourinho’s last months at United where anyone with a brain could see it was going wrong, and I wanted him to stay there for so much longer to see how deep the hole he could dig would become.

Tactics are bad. Performances are bad. In-game management is bad. Goal scoring is bad. Defending is bad. Midfield is bad. Creativity is bad. Controlling games isn’t so much bad as non-existent. Despite heavy investment which – and I keep stressing this – fans were happy with and willing to get behind, this team is performing worse than the one which saw Arsene Wenger sacked.

At some point though, it becomes less about Unai Emery and his inability to manage Arsenal Football Club the way it should be, and more about the people upstairs who continue to allow him to do it. This summer we thought we had a more dynamic, more experienced football executive set-up who would make the right decisions for the football club. They addressed issues in the transfer market, there was investment and the club transfer record was broken (how funny is it that our ‘best’ performance in recent weeks came in a formation which basically has no place for a £72m winger?!).

Everyone was singing the praises of Don Raul; the arrival of Edu was seen as another step forward; and the communication from Josh Kroenke suggested a level of interest from the owners that they hadn’t previously demonstrated. Now, after just three months of the new season, the spotlight turns on these men again, because as long as you let Unai Emery do what Unai Emery does, he will do it. We know what he’s about, this is what he gives us. We will play poorly, we will drop points, we will continue to fall behind where we badly need to be.

In the absence of Emery’s own resignation, the duty of care falls on the board, the Head of Football and the Technical Director to make the right decision. Emery should not be allowed continue in his job because he’s doing it badly, and there’s too much at stake this season to indulge his failings any further. If they do, then they’re not doing their jobs properly, because anyone can see this is over and it needs to change.

Sometimes a managerial appointment doesn’t work out, that’s football. They got the wrong man, that happens. As I’ve said before, it might take us a few goes to get the right manager in place, but getting it wrong in the first place isn’t half as bad as letting the wrong man continue when you know it’s not working. Edu and Raul were at the King Power last night, they’ve been watching this team all season, what makes them think it’s going to get any better?

So, this is on them now. We’re in a difficult position, but this is why they get paid the big money. Make the difficult decisions, but don’t sit on your hands hoping it will all miraculously improve because it won’t. Their inaction will now be a contributory factor to every Premier League point we drop.

I think this is a pivotal moment. We’re clearly in bad shape, and the top four is getting away from us. It’s not gone yet though. We’re 12 games into the season, there are another 24 to play. We have no chance of getting there if we allow Emery to maintain this level of performance, that’s obvious, so make the change. We’re at the point now where the season is just about salvageable … just … but without strong, decisive action from the top of the club, there’s no chance.

Over to you chaps.

Arsenal have six days to sort out the midfield