Home Arseblog, the arsenal blog Come on, feel the noise 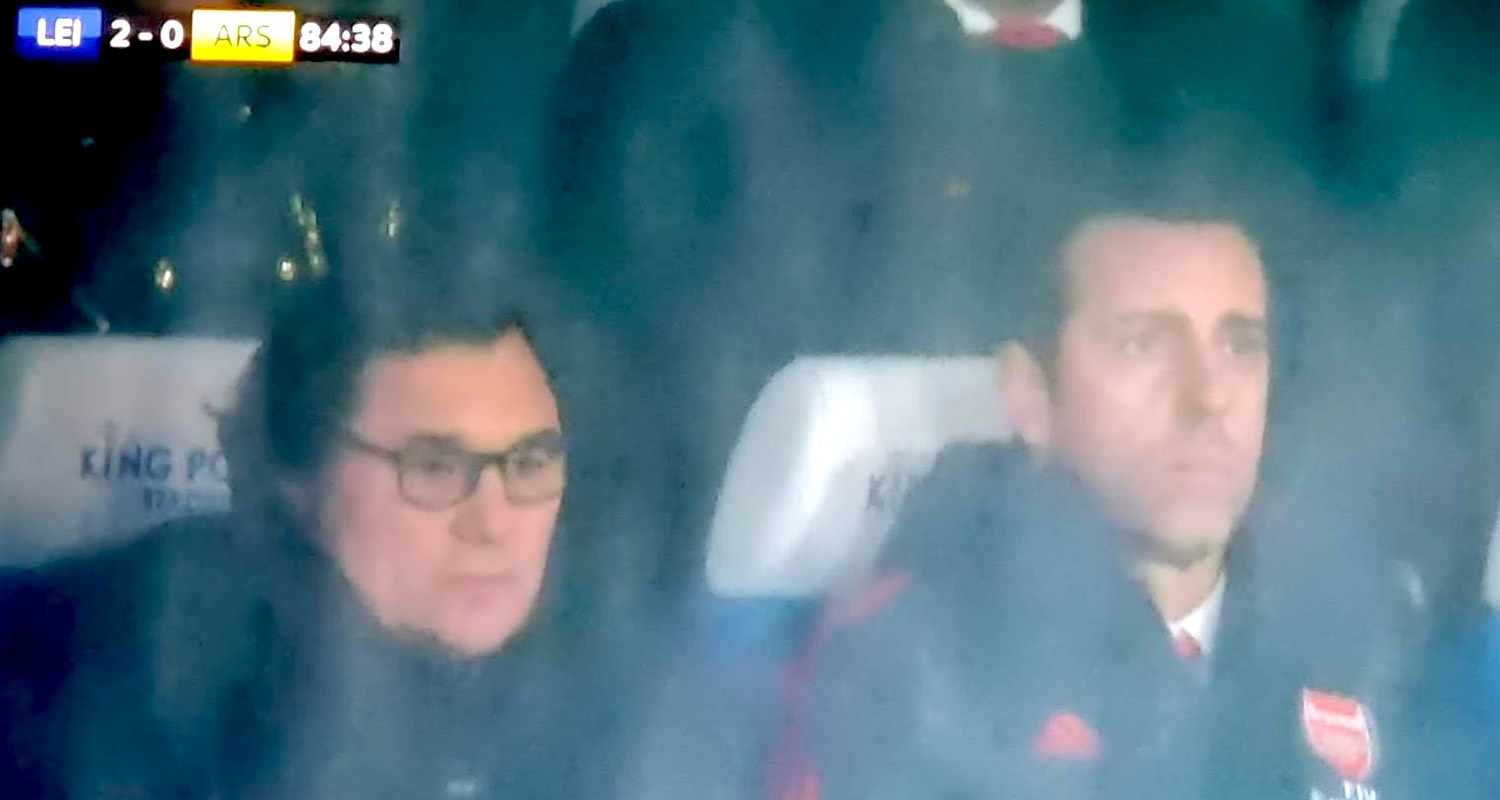 Not long after I’d posted yesterday’s blog about how those above Unai Emery will have to take some responsibility for what’s happening on the pitch, David Ornstein dropped a piece on The Athletic (£) which I’ll readily admit made my heart sink.

The title was: EXCLUSIVE: Arsenal will not sack Emery and are ‘100%’ behind the manager. They believe club are on the right path.

In it, David outlines their “100%” support for Unai Emery, and how they plan on waiting until the summer to make a decision about his future. As depressing as that is on its own, there were other elements to the piece which resonated, and not in a good way.

First, their view of the Leicester game:

The internal view is that prior to the goal, the Gunners had been dominating play, creating doubts in their opponents’ minds and building momentum. Vardy’s effort came as a body blow to a team already struggling for confidence and from that moment on, they posed little threat, soon conceding a second to James Maddison.

There is acknowledgement at Arsenal that Leicester are an extremely strong side, especially at home, and the top brass think Emery’s team showed clear signs of improved performance. It encouraged their view that Arsenal are on the right path.

While our performance was certainly a bit better than we’ve seen in the games against Sheffield United (which we lost), Crystal Palace (which we threw away a 2-0 lead in), and Wolves (drawn, at home), it’s patently false to suggest that we were dominating play. We were in the game, but inevitably our defensive frailties came to the fore and it cost us. This is the defence that Unai Emery picks, coaches, organises and is responsible for. The defence that he has failed to improve one bit in his time at the club. That’s not the right path.

Leicester are a strong side, but perhaps the Arsenal board should take note of the fact that Brendan Rodgers was only appointed there in February 2019, and in that time has done more to improve them than Emery has in 18 months at Arsenal. In fact, he’s a very good example of how changing a coach can bring about improvement. He couldn’t use the transfer market when he took over, he just coached his players better than Claude Puel and connected with them in a way the Frenchman could not.

As Emery continues to talk about difficult circumstances as the reason his team lack the ’emotional stablity’ to perform, they might also look at a team that sold its star central defender in the summer without replacing him, and a club which have gone through genuine tragedy off the pitch in recent times, and wonder if perhaps there’s not a great deal to the idea that the Laurent Koscielny departure, plus the Ozil/Kolasinac attack are having a negative impact on us months later. As for the Xhaka thing, they should very closely analyse Emery’s own role in that and how he contributed to the eruption we saw from both sides.

Then we get to the bit that really wound me up:

They are adamant their project is sound, well-planned and will bring success, provided the external atmosphere allows it to do so. They hope the international break comes at a good time for the Arsenal squad — allowing them a welcome change of scenery — but accept the absence of domestic matches will increase the “noise” around Emery and they are determined not to let it influence their thoughts or actions.

Noise? That’s what we’re seen as? It’s an unfortunate – verging on unpleasant – choice of word, dismissive of supporters who are rightly frustrated with a team that is not producing the performances or results that it should. It sounds like the kind of stuff a government might use to dismiss the plebs. Ivory Tower stuff, and to create that kind of a rift with fans is really not sensible.

Even something along the lines of ‘The Arsenal board recognise that fans are frustrated but remain convinced Emery is the right man’ would go down better. I would obviously disagree, but at least you could feel like they’re pretending to give a shit. That they haven’t even bothered to do that in this back channel briefing speaks volumes.

As for the suggestion that ‘external atmosphere’ will bring their project to success, that’s the biggest load of horse shit I’ve ever heard. And I’m alive in 2019 when every day brings a new, jaw-dropping nugget as we descend into society built on misinformation and brazen mendacity.

It’s such outright nonsense, and it’s an insult to our intelligence. Not least because even if you put aside that pesky ‘noise’ and the ‘external atmosphere’, there is hard evidence and data to tell you that this project is not working. I don’t need to give you all the stats again, because we’ve done them on the blog countless times, but look at the league table, look at results, look at our negative goal difference, look at the players we have and look at what they’re producing on the pitch and it’s pathetic, pitiful and just not good enough.

Arsenal have their own stats company, for goodness sake. I mean, I joke about StatDNA being the Windows 95 of software, but surely there’s enough data coming from there to tell you that what we’re doing is far from optimal. Ask it to produce stats to back-up the idea that Emery’s performance is good enough, that the project is ‘solid’ and so on. It won’t be able to, because it’s not.

It’s a very dangerous road to go down to be seen as blaming the fans for what the team is doing or the way the club are reacting to that. Now, in fairness, it might have just been a clumsy briefing which was badly worded and which doesn’t reflect the exact position of the board, but it’s out there now and it’s something they’re going to have to deal with.

Remember, there was so much goodwill towards Raul Sanllehi and Edu after this summer. There were pictures of them walking across the Ken Friar Bridge, chatting happily with fans and having selfies taken and so on, I doubt we’ll see that again for a little while. I think there’s some mitigation for Edu as he has only arrived in the summer, but for Sanllehi in particular this has been a very damaging 24 hours. He’s the Head of Football, it’s his job to oversee the team’s on-pitch performance, and if we take David’s piece at face value, he’s Nero watching Rome burn and telling citizens they started the fire so they’ve got to suck it up.

All in all it’s a PR disasterclass from Arsenal. If they thought that backing the manager would allow them to hide behind Emery the way they so often did in the past with Wenger, they’ve got it badly wrong. Instead, all they’ve done is shine a brighter light on themselves, because they’re the ones who can make decisions, and they’re the ones letting what is a calamitous performance level from Emery – over a period of 6 months across two seasons let’s not forget – continue.

As I said yesterday, there’s little point focusing on the head coach now. He is what he is, and he’ll do what he does as long as he’s allowed to do it. We might see some improvement, but the bar is so low that it wouldn’t really be much of an achievement. And here’s the harsh reality: we have 17 points after 12 games (1.4 points per game). Last season we finished on 70 points, Sp*rs finished in 4th on 71. Let’s just take that as the marker for this season, we’d need to take 53 points from the next 26 games (2.03 points per game) – that’s 18 wins.

Emery has 6 wins from his last 19 Premier League games (1.26 points per game), there’s no chance he’s making that kind of improvement significant enough for us to finish top four. So, by not making a change now, the club are basically putting all our Champions League eggs in a knock-out competition’s basket. They’re essentially saying that to achieve what we want this season, we’ll have to win the Europa League, and that’s a really stupid thing to do.

This is now 100% on Raul Sanllehi, Edu, Vinai, Josh Kroenke and those running the club. Maybe they’ll dismiss this as just noise. Maybe the legitimate concerns of the Arsenal fanbase can be cast aside because it’s not the external atmosphere they need to make their football porridge just right. But they’re treading on very thin ice, and there won’t be much sympathy if it all cracks and they fall through.

James and I will be recording what’s sure to be a pretty intense Arsecast Extra later this morning. As ever if you have questions or topics for discussion, send to @gunnerblog and @arseblog on Twitter with the hashtag #arsecastextra – or if you’re on Arseblog Member on Patreon, leave your question in the #arsecast-extra-questions channel on our Discord server.

Podcast will be up around lunchtime. Until then.