Home Arseblog, the arsenal blog Arsenal 2-2 Southampton: Another dismal day, but the blame lies higher up... 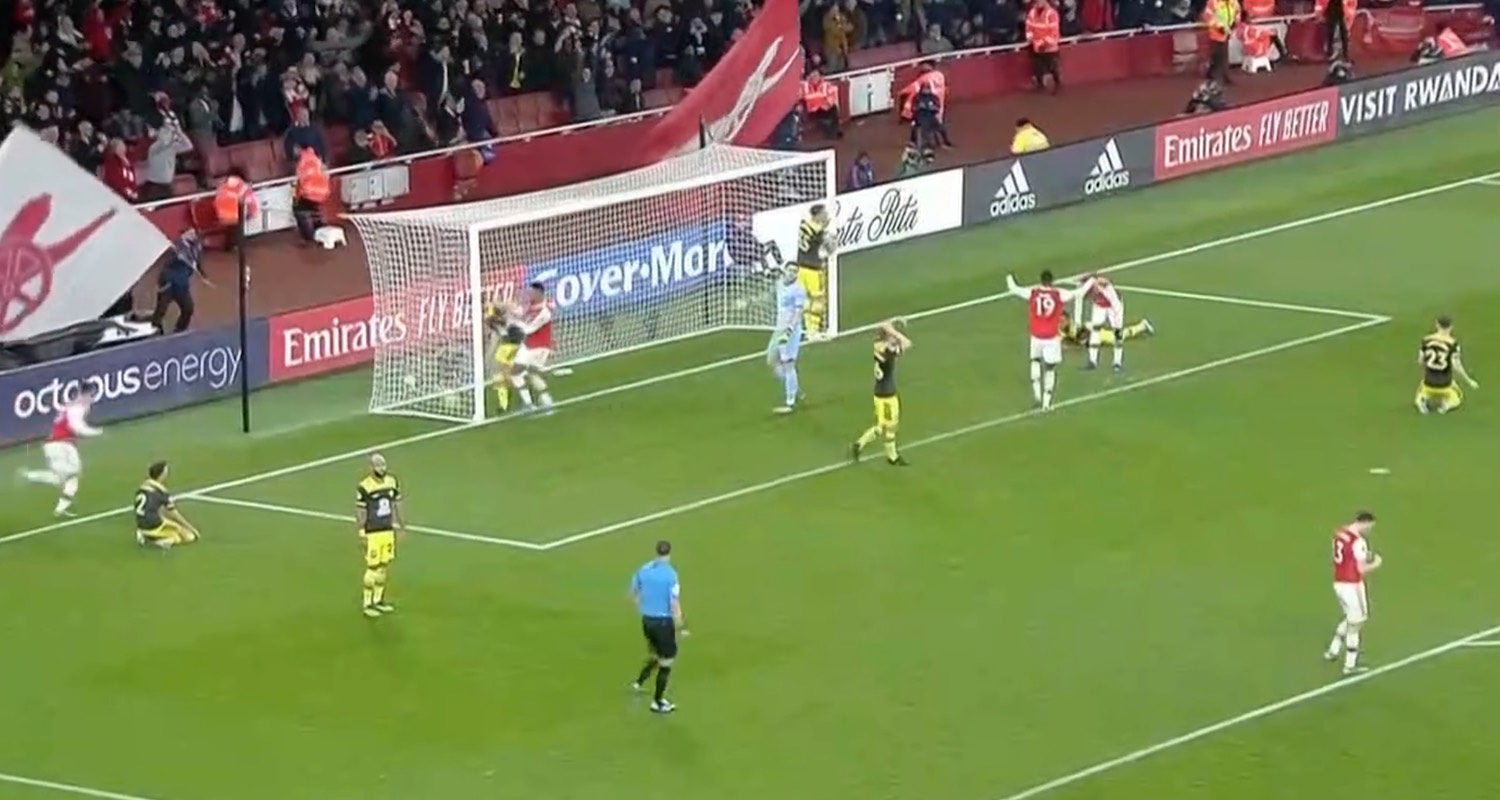 I’ll be honest with you, I didn’t think yesterday was going to be great. My expectations were low, but thought we’d probably scrape a one goal win, play poorly, and then chug along to the next game. I didn’t think it would be as bad as it was. And it was really very bad indeed.

That we got a point from the game is little short of a miracle. Southampton had a clutch of chances to seal the game, but squandered them all – Joe Willock’s heart and desire deserves a mention as he cleared a goal-bound effort away when everyone else had been beaten.

Then deep into seven minutes of injury time, Martinelli crossed, it fell for Alex Lacazette to score his second of the game, and I don’t think I’ve ever felt so much nothing at an Arsenal goal in all my life. He didn’t celebrate, he almost looked reluctant to acknowledge it at all, and I sat there wondering how on earth has it come to this? How are we in November of a season which started with such promise and this football club I’ve supported my entire life has made me feel like that about the most fundamental piece of enjoyment you get – a goal?

Maybe I’m an asshole or a bad fan or something. If so, feel free to criticise all you like, but I’m just being as honest here as I have been on this site for the last 18. It upsets me to feel like that. I don’t like it one bit, and actually writing that down now is making me more emotional than when we scored. A last-gasp equaliser in injury time should be the kind of goal that gets you off your feet, we’ve had plenty down the years and even in the context of a bad result you celebrate because it’s something.

This one felt different. Like the only thing we’d get was more of what we’d been served up for the previous 95 minutes: dreadful fare from a football team going nowhere under a coach who should be gone somewhere else but who seemingly retains the backing of a hierarchy that don’t seem to care enough to make it stop and make things better. Even acknowledgement of our current problems is grudgingly offered after clumsy back-channel briefings backfire spectacularly.

It’s a truly depressing state of affairs, and while we can take apart Unai Emery’s performance and decisions, it seems a bit redundant because while he is certainly a problem, the bigger problem is that he’s allowed to keep picking the team and the tactics each week when it’s been blindingly obvious for some time that he’s lost his way and is unable to produce anything close to what’s required.

We started yesterday’s game against the league’s bottom side with a back five. Some might call it cautious. It was a decision based out of fear. Emery had talked up Southampton’s away credentials to the point where even afterwards captain Pierre-Emerick Aubameyang parroted it. He said the team expected the Saints to play they way they did, and that’s because Emery is obsessed with, and terrified of, the opposition. It doesn’t matter if they’ve only won twice all season, they are fearsome dragons in his mind, and thus he sets up accordingly and that fear is transmitted to the players.

They scored first, of course, when we were caught napping from a short free kick. Lacazette equalised with our first shot of the game. We looked wobbly at the back, Sokratis in particular found it tough. At half-time, Emery switched to a back four, brought Pepe on for Chambers rather than the skittish Greek international, and in fairness the opening 15 minutes or so were our best spell of the game. Aubameyang had an effort saved, Pepe hit the bar, and you wondered why we didn’t start the game like this.

Soon enough though, Southampton realised this was just a temporary issue for them to deal with and began to take control. They should have scored when Sokratis was robbed of the ball in his own box, and did score when Ward-Prowse tucked home a rebound after we’d conceded yet another penalty and Leno actually saved the initial effort. That was in the 71st minute. It took Emery until the 83rd to make changes, with Willock and Martinelli replacing Bellerin and Torreira.

We were basically a shambles after that. How Southampton didn’t make it 3-1 I’ll never know. Even Ralph Hassehuttl said afterwards he thought his team should have scored four or five. That’s the manager of a team in the relegation zone talking like that after coming to play at our home. They should have been out of sight but there’s always a chance when you don’t put the opposition out of their misery, it’ll come back to haunt you. We’ve been that side before, and yesterday we were the ones to take advantage of opposition profligacy when Lacazette’s injury time equaliser went in.

None of what happened on the pitch was a surprise. It’s the kind of performance that even if you didn’t necessarily expect, you feared because of how this team has been performing of late. Just four wins in the Premier League all season, six in our last twenty league games across this and the previous campaign, negative goal difference, and once again we were out-shot by the opposition – allowing Southampton 21 attempts at goal to our 12.

This is a team bereft of confidence, coached by a man bereft of ideas, floundering its way through a season which promised so much more back in August. Game by game the essence of Arsenal, the footballing identity we had built over the last 20+ years is ebbing away, and at this point I don’t really have it in me to be that angry about Emery himself. Like most managers he’ll keep going, believing that a good result will suddenly spark the team back to life, and another few good results will restore belief in him, and he’s so wrong about that it’s painful.

However, what else is he going to do? Managers/head coaches rarely resign, they’ll keep doing their stuff until someone calls time on them, and this morning that’s where the focus should be. When talking about this, we have to recognise that there is no point generalising and criticising ‘the board’, the way you normally might. There are two distinct entities here at Arsenal.

The ‘traditional’ board, those upstairs, are really nothing more than ceremonial figureheads following KSE’s takeover last year. Last night, via an Amy Lawrence piece in The Athletic (£), we learned that Sir Chips Keswick, Arsenal’s chairman, is considering resigning because he doesn’t want to ‘carry the can’ for what’s going on right. He’s someone who has been criticised – and rightly so – and obviously he’s not the man to lead this football club into the future or anything like it, but leave that aside to recognise what he’s saying: the ‘board’ –as we knew it – are powerless to do anything about the Emery situation even if they wanted to.

Instead, we have to look a little to the left to see the real decision makers. Raul Sanllehi is the Head of Football; Edu is Technical Director; Vinai Venkatesham is the Managing Director; Huss Fahmy is whatever the hell he is, but he’s in that cohort; and they are the people with the ear of the owners, Stan and Josh Kroenke. They are the ones who Emery says support him every day; they are the ones presiding over a head coach whose performance level would see him relieved of his duties at any club that cared about salvaging their season; they’re the ones taking exception to ‘external atmosphere’ and ‘noise’, as if we’re the problem or too stupid to understand their ‘sound and well-planned project’.

Unai Emery is obviously a problem, but he is not THE problem. That lies with an ownership that is allowing this club to fritter away an entire season without strong, decisive action; and a football executive committee that believe they’re smarter than everyone else and refuse to do what’s best for the team and for the club. We dropped two points yesterday, and many will blame the head coach for it. Not me. Every single bad result, poor performance and dropped point is on them because they’re the ones allowing this to continue.

They have a duty of care, their jobs demand they do the best for the football club as a whole, because there are wider consequences to a dismal season than just sporting failure. We worry about another season outside of the Champions League, but what about a season with no European football whatsoever? What are the knock-on effects of that  – not just for the team but for Arsenal Football Club and all the people who work there? We’re not an organisation that can draw on the resources of an generous owner to make up the financial shortfall that a lack of European football would inflict. KSE have already implemented cost-cutting measures since taking full control, the real life effects of a terrible season will cost regular, hard-working people their jobs.

It’ll be ok for Emery. When they do eventually do what they should have done weeks ago, he’ll get paid off the tune of millions of pounds, so will his staff, so don’t feel sorry for him.  He’ll be fine, soon enough he’ll have another job at another club, but there are wider issues to think about too. Arresting the obvious, miserable decline on the pitch has got to be the priority, because when that gets better, everything else follows, but in failing to do that, the decision makers at Arsenal are risking an awful lot more.

So, be frustrated at Emery all you like. I am, I will be as long as he’s here, but if a company has an under-performing worker who puts the organisation at risk and they continue to employ him, we all know where the buck really stops.

This summer, I felt like we’d taken a step forward, that we had people who understood the club, football people who would bring Arsenal back to where we wanted to be and establish us once again as force domestically and in Europe. I feel like an idiot this morning for believing that, because the longer this goes on, the more obvious it is that their incompetence, cowardice, and inaction will set us back further than we could have ever imagined.

Till tomorrow when James and I will go over this on the Arsecast Extra. Have a great Sunday.