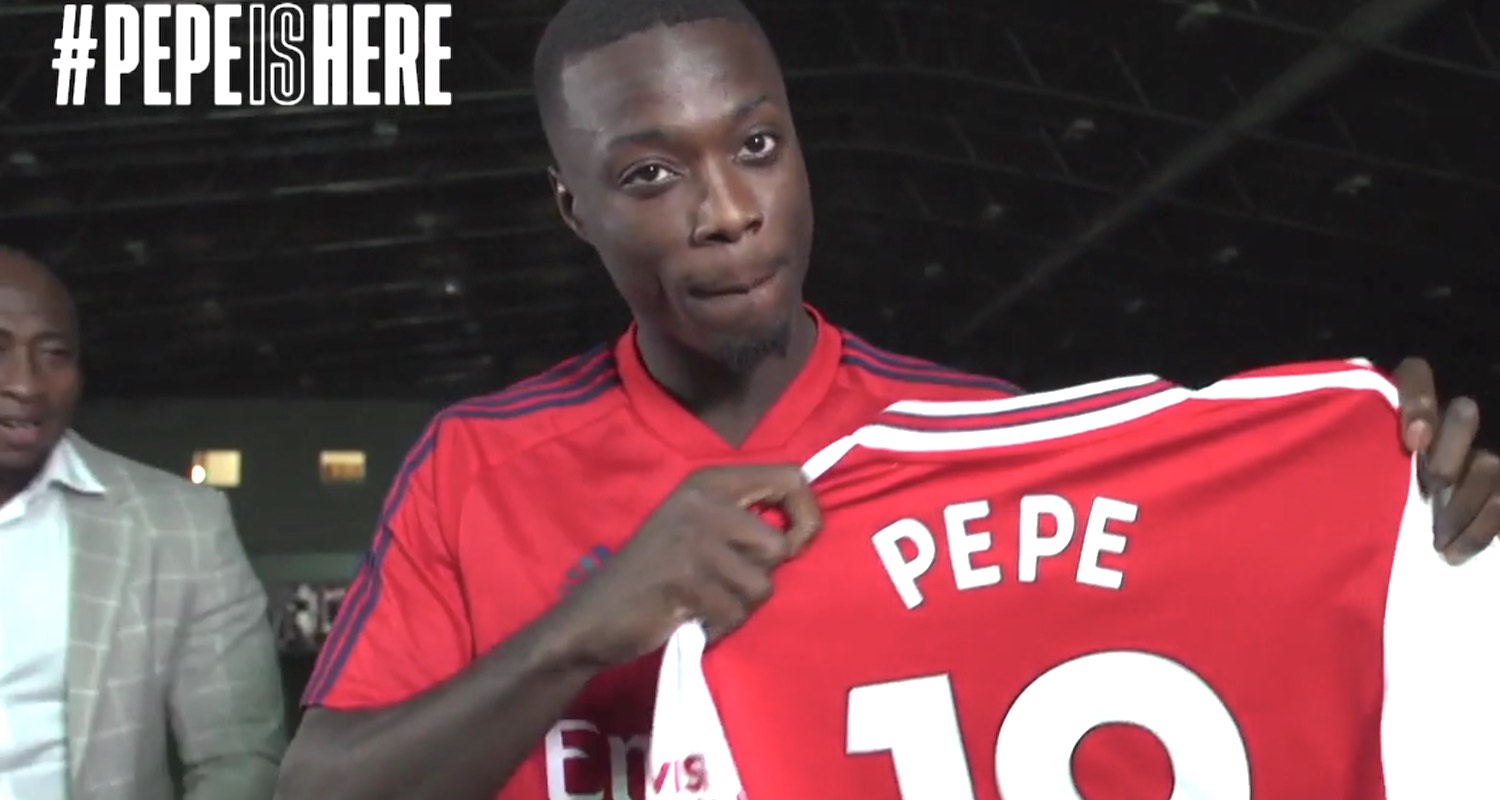 Football clubs make signings with greater frequency than people tend to think. For example, since the start of the 2016-17 season, Arsenal have brought in 17 new players. In that period of time we’ve broken our transfer record three times.

The arrival of Alexandre Lacazette broke the Mesut Ozil record; the capture of Pierre-Emerick Aubameyang from Borussia Dortmund broke the Lacazette fee; and while both of those deals saw very good players come to this football club, neither felt quite as important or potentially transformative as the signing of Nicolas Pepe which was finally made official yesterday.

So for Arsenal to have, dare I say ‘Outsmarted the market’, and brought him to the Emirates is the kind of signing which immediately changes the perception of who we are at the moment, how we operate, and the direction we’re going in. Let’s be clear: concerns about those things were not unwarranted. We ended last season dismally, blowing two chances to get back into the Champions League, and with the new season close to kicking off, the business we’d done in the transfer market was not reassuring.

It was good we’d made a nod to the future with William Saliba, and the Dani Ceballos loan move will hopefully prove as smart as it looks, but essentially it was the same squad as last season – with all its flaws – but without Petr Cech, Aaron Ramsey, and Danny Welbeck, and with a captain who has gone on strike. Promising young players made their mark in pre-season, but not all of them are ready for consistent Premier League action to make up that shortfall in talent. Fans had every right to feel worried about the state of the squad, and while I’m not going to focus on outstanding issues this morning, we all know there’s more business that needs to be done before the window closes.

However, this feels big. No doubt about it. It’s the kind of signing which illustrates a seriousness about making us a better team, adding flair and creativity to a side which has been functional in attack thanks to two excellent strikers, but lacking something important in the way the game is played these days. Pepe’s qualities will unquestionably make us more interesting to watch, and he’s the kind of player who not only puts bums on seats when it comes to ticket sales, but gets people out of those seats because of the way that he plays the game.

Beyond that, it says something about what Arsenal is and what Arsenal wants to be. Not just to supporters, but to the players as well. Maybe one or two noses might be out of joint because we’ve brought in someone who is going to make first team football more difficult for them, but raise your game, accept the challenge, or off you go. For the rest, it’s a very good player – with the potential to be top class – brought into a squad which fell short last season and which needed an injection of something special. Pepe is footballing EPO, and when you consider who he might link up with and what that might do to the football we play it’s all very exciting.

If you haven’t watched the video of his first day at the club, you should. I enjoyed Raul Sanllehi and Edu welcoming him to London Colney, and this really feels like the kind of deal that has the former Barcelona man’s fingerprints all over it. Did we have to get into bed with some agents to make it happen? Yes. Will we see an increase in the amount of payments to agents when those figures are released? Yes. But that’s the reality of making signings like this, and I’m not sure this is one we’d have been able to do under the previous administration.

I loved the bit in the video where Pepe sees his Arsenal shirt for the first time. It’s nicely packaged in a box which he unwraps, and his face as he does so tells you how much it means to him to be here. He follows in the footsteps of some former Ivorians, something he touched on when he spoke the official site, in particular Kolo Toure who was with the Ivory Coast squad at the African Cup of Nations:

He spoke to me a lot about the very high level, how he got to Arsenal and how you always have to work hard and really graft on a daily basis to try and get right to the very top.

And on the decision itself:

It was my family and my agents. We talked and thought a lot about it. It was at the time of the CAN [Africa Cup of Nations] as well, we thought a lot during, before and after the CAN. It was important to make the right decision and I am convinced that Arsenal is the right choice.

No doubt money played a part, but as Matt Spiro points out on today’s Arsecast, Pepe is not a player driven by that – turning down big deals last summer as he felt he wasn’t quite ready to leave Lille. That we’re the club he’s chosen when he is ready is fantastic, there are no two ways about it, and hopefully he can continue to develop and fulfill the obvious potential he has.

It has changed the way I feel about next season. I’m more enthused and invigorated, excited and anxious for it to start. Again, I say that with the caveat that there are issues outstanding we have to address, but we’ve had that discussion before, we’ll have it again, and today is a day to enjoy the fact we’ve brought a player this good to the football club. I can’t wait to see him in red and white, terrorising defenders and the prospect of him, Lacazette and Aubameyang playing together really is a delicious one.

Finally, credit to Raul whose very good plan appears to be taking shape. He said this week that this particular transfer window had nothing to do with Edu, taking the heat off the new man, but also making it abundantly clear that this summer is his responsibility. He’s the Head of Football, the job of ensuring the squad is ready to do what we need it to do next season is on him, and he deserves the plaudits for a deal as good as this. Let’s hope he’s got more to come before the new campaign starts.

For more on the Pepe signing, there’s a brand new Arsecast for you, with guests Matt Spiro and Clive Palmer going at the new man from different angles, plus there’s stuff on Saliba, Koscielny, our defence and lots more. All the links you need to listen/subscribe are below. Happy listening.

Can Arteta get more from Pepe and Guendouzi after the Winterlull?

The Nic of Time