“It’s going to be crazy. Everybody is excited about that. We will have time to play together and we will see. I am looking forward to it. The next game we play at home [against Burnley on Saturday] and we will see what is the coach’s decision. It will be difficult for him [to fit us all in] but that’s the game. When you have a good team it is like that and you have to make choices.”

So said Pierre Emerick Aubameyang of the prospect of forming a front three with Alex Lacazette and Nicolas Pepe. Aubameyang and Lacazette comfortably represent Arsenal’s biggest goal threats and at a cool £72m outlay, Nicolas Pepe will be expected to supplement that. The thought of that trio playing in tandem has fired Aubameyang’s imagination as much as it has fired the collective imagination of the Arsenal fans.

However, there was an undercurrent of curiosity, even caution in his words. “It will be difficult for him [to fit us all in] but that’s the game.” The attacking triumvirate are Arsenal’s three record transfers, but it’s not immediately obvious how they all fit together. Essentially, Unai Emery has the same issue he had last season- how to accommodate two players that want to play centre-forward, when the coach prefers to play with one.

Last season Emery settled on a 3-5-2 that acted both as scaffolding for a porous back line and a means of shoehorning his two outstanding attacking talents into the team. The system had mixed results at best and it is clear that it was not the coach’s preferred solution. The signings of Kieran Tierney and Dani Ceballos strongly suggest that Emery wants to revert to a back four and a more orthodox midfield shape.

Pepe is the easiest component of the formula. We know he plays as an inverted winger from the right-hand side and that suits a modern front three shape. The Ivorian is unlikely to fit any structure that accommodates a wing-back in a back three. He is the natural wide-forward Arsenal and Emery have craved and with that price tag, the plan will be to play him as often as possible.

This begs the question of how best to fit Lacazette and Aubameyang into this structure. Now, you could argue that it should only accommodate one of them, but Arsenal are currently locked in contract talks with both parties and that tells you that the club are not about to sideline one or t’other from the starting eleven any time soon.

This might mean that Aubameyang will have to settle for the left-forward spot as and when Emery decides to play his three supreme attacking talents together. There has been a lot of supposition, from me as much as anyone, that the Gunners could look to ape Liverpool’s world famous front three.

It’s natural that we look to successful sides and mentally re-mould our own teams in their image- see the previous Arsenal hierarchy’s brief obsession with copying Leicester City’s scouting principles when they won the title in 2016. Lacazette, it is argued, could offer a good working impression of the job Firmino does for Liverpool. He prefers to come away from the front line and knit moves together.

From there, Pepe and Aubameyang could play as inverted forwards a la Mane and Salah. Bellerin and Tierney offer good coverage down the flanks in the same way that Robertson and Alexander-Arnold do for Liverpool. However, I am not convinced it is as simple as that. For a start, Aubameyang does not quite have Mane’s dribbling ability.

The Gabonese is not interested in any element of the build-up play and while he can skin a man alive when there is green grass behind a full-back, in tighter situations, beating players is not his speciality. Liverpool’s midfield is also a crucial part of maintaining equilibrium on the flanks too. With Salah and Mane tucked in and Robertson and Alexander-Arnold pushed right up the pitch, the midfield interiors for Liverpool do a sterling job of covering the flanks and protecting Liverpool from counter attacks.

In Torreira and Guendouzi, Arsenal potentially have two players capable of performing a similar job. I am less convinced that Granit Xhaka and Dani Ceballos are tailor made for this kind of detail. It is a very physically demanding task and that’s why Klopp rotates his midfield so readily. He treats the season like a sprint relay for those midfielders. Arsenal cannot play an entire season with just two midfield players assigned such a role.

In any case, I am not yet convinced that Emery sees replicating Liverpool’s strategy as his Plan A. For the majority of pre-season, the coach has reverted to his preferred 4-2-3-1 shape. As Anam observes in his piece on the Newcastle match, Emery likes his wide forwards to move in-field and create a box shape with the midfield double pivot, while the number 10 behaves a little like a decoy. 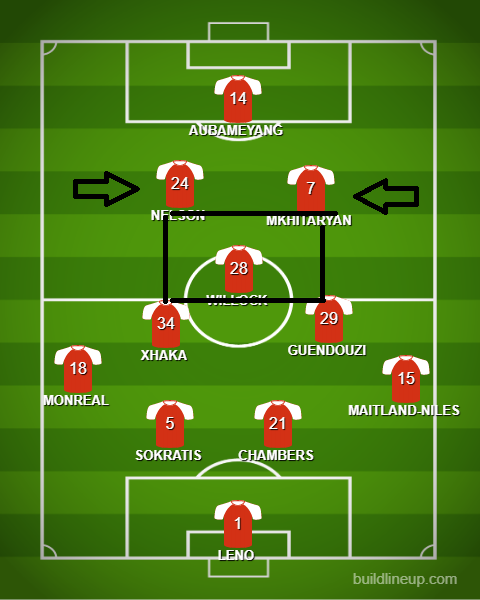 Pepe could fit that style, Aubameyang less so if played from the left. I also think Arsenal lack firepower when Aubameyang is not playing, Lacazette is an effective foil but I’m not fully convinced he is the guy to lead a front line on his own. He likes to move backwards towards play, the Gunners lack presence in the box without their Gabonese striker.

That said, Emery has played Aubemayang from the left often enough to know that he is not suited to playing the role as Nelson and Mkhitaryan did at St. James’ Park. Emery said as much during pre-season, “Aubameyang can play like a striker alone, like a striker with two and can play as a winger on the right or the left.

“When we are deciding to play with another player maybe they are more of a one-to-one winger or a player like Mesut, a player who goes deep to take the ball and keep our possession with him in the pitch. It’s different in each moment and each match. But above all, with Aubameyang, we can take different options with him.”

Pepe’s participation in the African Nations means that the coach has not had time to work out how to integrate him with Aubameyang and Lacazette and Auba’s own musings (“when you have a good team it is like that and you have to make choices”) suggest it’s not yet been discussed in a defined way. If Emery is to use all three of his record signings at once, he might have to work it out on the hoof.

He could chance upon a similar 442 shape to the one deployed by the 1997-98 Double team, with Pepe playing a kind of Overmars role from the right. In that team, Ray Parlour shifted in-field from the right flank to form a midfield three with Vieira and Petit, freeing Overmars to break into inside forward positions. It is conceivable that Ceballos could do something similar from the left and form a three with two of Xhaka, Guendouzi and Torreira.

Emery might favour the Liverpool approach, of course. That he played with a 4-2-3-1 for the majority of pre-season and for the game at Newcastle might simply be a reflection of the players at his disposal. Arsenal fans will be understandably excited to see a PAL (Pepe Aubameyang Lacazette) front three, it might take some time to find the right balance, assuming that balance exists at all.

Three Things to Look for for Arsenal...