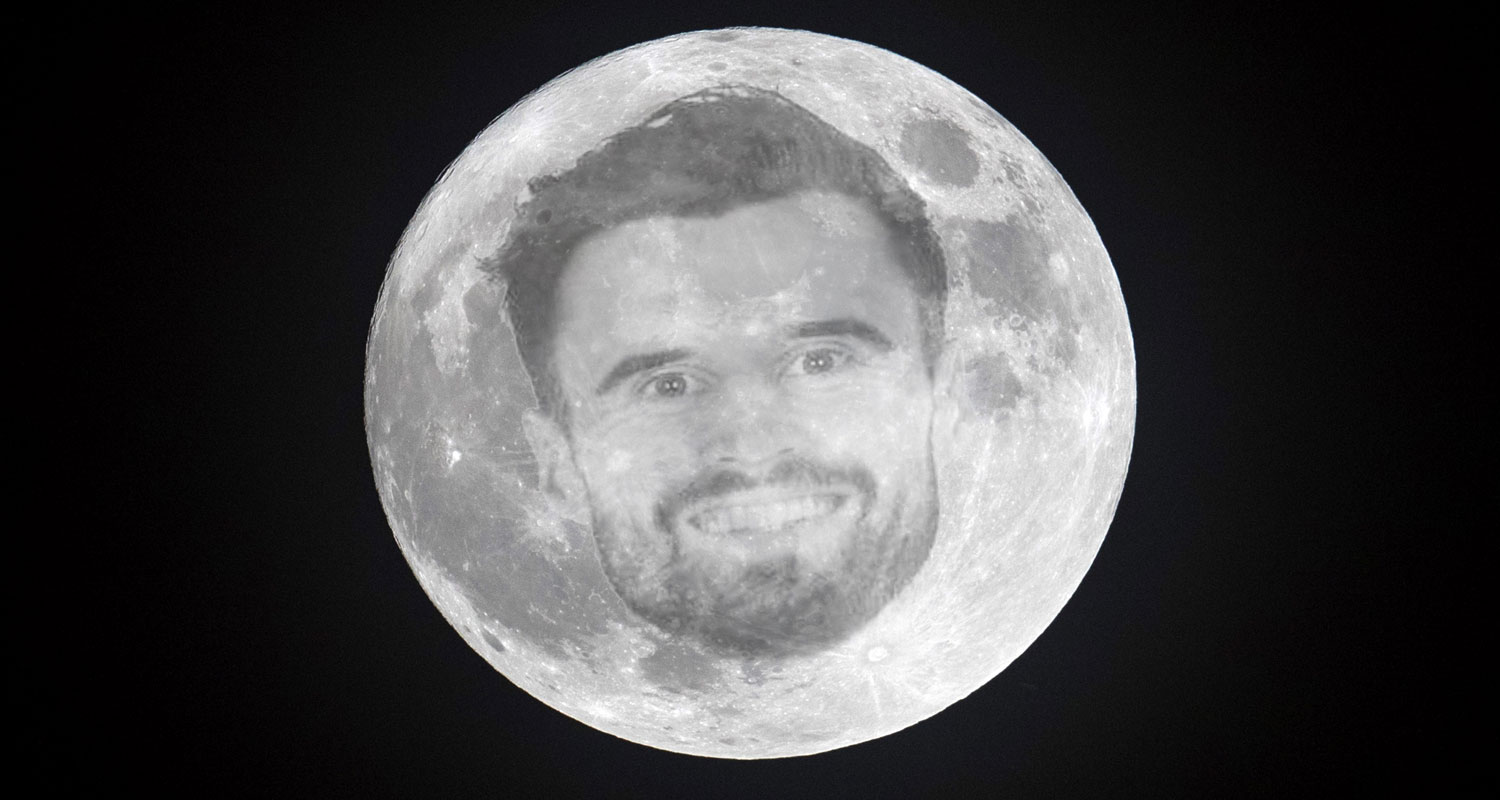 You know the way the earth and the moon are inextricably linked? Actually, I don’t know if that’s the right expression. I guess it’s gravity or something. Or the fact that the moon doesn’t have rocket boosters so can’t go flying off even if it wanted to. Speaking of the moon by the way, there’s a really great podcast from the BBC World Service called ’13 minutes to the moon’ which I highly recommend. It’s all about the moon landing, Neil Armstrong, Buzz Aldrin, the other lad, and how it all happened. It’s genuinely fascinating.

Anyway, the point is that the moon really loves the earth. Wherever we go, it’s right there. Sometimes we can see it, sometimes we can’t. The old waxing and waning malarkey. Science. Space. The universe. Is it all a simulation? Yes, it probably is and it strikes me that someone needs to tell the software guys because it appears to have developed a number of very serious glitches. That’s the only explanation for a lot of stuff that’s going on right now.

I can hear you wondering what is the point of this lunar nonsense this morning, and I get that. Basically, it’s a way of talking about the Carabao Cup draw which took place last night. Arsenal (the earth), will play host to Nottingham Forest (Nottingham Forest). But within that Forest squad there is the moon (Carl Jenkinson). Despite the fact he’s transferred away from the club on a permanent basis, his Arsenal gravity has brought him home.

At some point in the week commencing September 23rd, we’ll no longer not see the Dark Side of the Carl, but we’ll get Jenkinson’s Full Moon. Not quite the same as Sammy Nelson’s but nevertheless he will return, just as nature/science/the simulation intended. When your connection to something is that strong, it even affects the swirly balls in a cup draw. Imagine if he scored? He’d probably cry. Big Moony tears of happiness at scoring but despair at scoring against Arsenal. You’d love to see it (assuming that our young tyros have already ruined the Forest left back and scored four or five).

Now, moving on from the Carabao Cup and looking ahead to the weekend and the North London derby. We don’t have any team news or fitness updates just yet, but I’m going to make the assumption that all three of our forwards are fit. I mean, we have more than three but of course I’m talking about Pierre-Emerick Aubameyang, Alexandre Lacazette and Nicolas Pepe.

Unai Emery was not prepared to throw caution to the wind at Anfield, and left the French international on the bench. From my distant vantage point, and through the medium of TV, it looked to me like this was a decision that the striker did not enjoy. When he came on after 81 minutes and with Arsenal 3-0 down, he looked quite pissed off indeed (and I don’t blame him really). He threw himself into those 9 minutes, and during that period we scored a goal through Lucas Torreira.

Now, while I think most of us can understand the thinking behind Emery’s approach going away to Liverpool (even if some of us don’t necessarily agree with it), there can’t be any such thinking going into the derby on Sunday. If you can’t, or won’t, play that front three with all its qualities in a game like this, there’s something seriously wrong. Which is to say that I fully expect Emery to do it, and if he doesn’t it’ll be both surprising and disappointing, to say the least.

As the week has gone on I’ve come back to something James said in the Arsecast Extra about how the Liverpool game was essentially a ‘free hit’. Nobody expected us to win, so it gave him a chance to try something to see if it would work. I still don’t think it worked that well, and that our approach was mostly to lose by less than we did last season than actually try and get something from the game, but maybe there might be things that we can take into this one. For example, is a pissed off Alexandre Lacazette, still fuming at being a mere substitute at Anfield, going to go into the Sp*rs match feeling like he’s got something to prove?

It’s been a relatively slow start to the season for the Frenchman. I know he scored against Burnley, and it’s only three games in, but his rhythm was definitely disrupted by that injury in pre-season. Sunday would be a great time for him start banging the goalscoring drum again. Beyond that though, I want to see him alongside his mate Aubameyang, and Pepe, because not only does it give us a forward trio with wonderful combinations of pace, experience, finishing, skillz, and all the rest, it’s about the message it sends from the very start.

It says that Arsenal are out to play, not just to try and nick something from a game. It doesn’t defer to the opposition in any way. It says to the them ‘We’re going to cause you problems today, let’s see if you can solve them’. At home, against Sp*rs in a derby, there’s only one way to go at it. To use an Emery phrase, we have to be protagonists. Did you know an anagram of protagonist is ‘giant troops’, while one of ‘antagonist’ is ‘stagnation’. Words are telling us what to do here!

No doubt Emery will be asked about this very thing at his pre-game press conference, and we’ll get something vague about more minutes or how they are working with one moment to create another moment, but the proof of this particular pudding will be in Sunday’s team selection. More on the derby over the coming days, and on tomorrow’s Arsecast.

ps – Here’s a link to that podcast I mentioned.