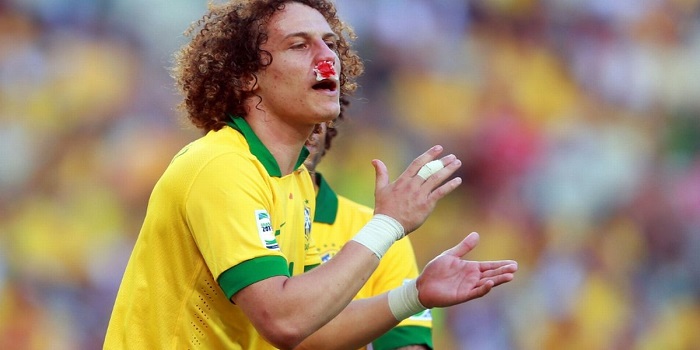 David Luiz, eh? I bet you didn’t see that coming. The circumstances in which he arrives at Arsenal are uncannily similar to the ones that saw him return to Chelsea in 2016. Having unsuccessfully cased Kalidou Koulibaly all summer, the Blues desperately needed a centre-half going into the last 48 hours of the window and David Luiz arrived back at Stamford Bridge, well, out of the blue.

Luiz is part of Kia Joorabchian’s stable of Brazilian players and this was significant in his unexpected return to Stamford Bridge. Chelsea reluctantly took Alexandre Pato, another one from the Kia rolodex, on loan at the tail end of the 2015-16 season. Within a year of that anomalous looking loan deal, Luiz had arrived at Chelsea and two more Joorabchian players, Ramires and Oscar, were sold to China for satisfactory fees.

Joorabchian has close links to Edu Gaspar dating back to his time at Corinthians, which I explained on a recent edition of the Arsecast. Kia’s friendship with Edu and closeness with Raul Sanllehi probably made this deal a relatively hassle-free affair for the Gunners. With other options exhausted, the deal makes some sense for Arsenal who are getting an experienced, Premier League ready centre-half.

Welcome to The Arsenal, @DavidLuiz_4 ?

At 32, Luiz is at the tail-end of his career at the top level but having spent £27m on 18-year old William Saliba this summer, one can appreciate the logic of an experienced short-term option. It is fair to say Luiz has divided opinion during his career, he is widely regarded as a player that veers between brilliance and catastrophe and that reputation is not without foundation.

In a system suited to his strengths, the Brazilian is an imperious player. Indeed, since returning to Chelsea in 2016, he has been largely excellent. As the central ‘pin’ in a back three, he thrived under Antonio Conte as the Blues sauntered to the league title. When Maurizio Sarri took over from his compatriot in the Stamford Bridge dugout, he reverted to a back four and Luiz was just as comfortable alongside either one of Rudiger or Christensen.

Luiz clearly enjoyed the tactical stylings of ‘Sarri-ball’, “I think his philosophy is amazing, it’s trying to play football,” Luiz said back in April. “It’s the way I love football, the way I enjoy football not just playing but watching and I think I love his philosophy.” Luiz loved Sarri-ball because it allowed him to express his strengths, not least his outstanding range of passing.

42 – David Luiz attempted 42 through balls in the @premierleague in 2018-19; eight more than any other player in the division. Geezer. pic.twitter.com/Mp6rSrOYoq

The Brazilian is far more than a line breaking passer, he is genuinely one of the Premier League’s most creative players. Luiz created 11 big chances in the Premier League last season, more than any Arsenal player. These are incredible numbers for a centre-half. Luiz’s stunning passing range allowed Chelsea to wean themselves away from Cesc Fabregas and Nemanja Matic, whose lack of speed in transition held the Chelsea midfield back.

While it is true that Gunners fans will be more preoccupied with his defensive abilities, his distribution adds another dimension to the team. It might even allow Arsenal to manoeuvre Granit Xhaka out of the midfield in favour of more mobile options. As a defender, Luiz’s career shows that in the right setup and with the appropriate defensive partner, he can be a colossus.

His partnership with Thiago Silva for Brazil and Paris Saint Germain was the best in world football at the time. However, when Thiago Silva was suspended for the 2014 World Cup semi-final against Germany, well, we all saw what happened. Luiz’s international career fizzled out thereafter. Firstly because Silva fell out with the newly appointed Dunga and, without his teammate at his side, Luiz’s rash side crept to the surface.

Luiz spent a year in international exile, before being welcomed back into the fold in late 2015, when Silva’s relationship with Dunga had disintegrated to the point that he was no longer called into the squad. Luiz quickly violated that trust. First, because he was sent off in the dying minutes of a 1-1 World Cup qualifying draw with Argentina in Buenos Aires for a needlessly poor challenge. He followed this up with a rash performance against Uruguay in March 2016.

Brazil took a 2-0 lead in Recife before Luiz self-destructed. He allowed Luis Suarez to take him apart and the Uruguayans overturned the two-goal deficit. Dunga never trusted him again. He has made one Brazil squad under current coach Tite, but he was unused for those games. His penchant for petulance and his inability to function without Thiago Silva by his side made him disposable. Silva has since been reintegrated into the team.

This reputation for rashness has followed him throughout his career, in 2011 Gary Neville memorably described him as “playing like he is being controlled by a ten-year old playing the Playstation.” It is a comment Neville has since expressed remorse for and one that stuck in the public conscience. Despite his misgivings at international level, Luiz’s club career has remained on an even keel since signing for Paris Saint Germain in 2013.

Even when he left Thiago Silva behind to return to London, Luiz has looked comfortable in both a back three and a back four with multiple partners. He has been largely excellent during his second spell at Chelsea, demonstrating signs of maturity that were previously missing from his game.

That said, he was briefly exiled from the team towards the end of Antonio Conte’s reign after falling out with the Italian. He is far from the only player to fall foul of Conte’s perma-scowl, but then Luiz can be, shall we say, ‘expressive’ when he is unhappy. This might explain why Chelsea are willing to sell him to a direct rival.

Arsenal’s defence is in disarray and they need a shot of calmness and organisation. The question is whether Luiz can be that calming presence and a lot will come down to how well he gels with Sokratis. Defence is all about partnerships and you would imagine that those two be entrusted with plugging a porous back line. Aged 32 and 31 respectively, both are experienced performers, allowing space and time for Holding and Saliba to gradually replace them.

'This is one of the best days of my life.' ?
@DavidLuiz_4 paid a surprise visit to one of our BridgeKids members earlier this week… pic.twitter.com/REFI6Di6yL

Luiz is generally considered to be a good character in the dressing room. He is known for his upbeat disposition and generosity. He has regularly showed a common, affable touch with fans. Luiz credits his happy go lucky outlook to his strong Christian faith. He has also been a strong advocate of the Chelsea Women’s team. He turned up unannounced at their Champions League match against PSG last season and mingled with fans and players alike.

Look who our reporter @samantham7PD bumped into ahead of #CHEPSG! ?

Thanks for the score prediction, @DavidLuiz_4! ?

Whether he can bring the same sense of lightness to an Arsenal defence that has looked incredibly stressed remains to be seen. As a short-term option, he makes sense for the Gunners. Luiz has had a complicated career, but he’s not a complicated character, when he is happy, he is good and when he is unhappy he is bad. Time will tell whether he can find happiness in North London.